Muses, Virgins, And Unicorns In The Art Of Ikuo Ogawa

Ikuo Ogawa was a Japanese artist who worked in a yoga ("Western") manner using oil and lithography. His subjects are Greek goddesses and muses, accompanied by Pegasus, and medieval virgins followed by unicorns. The works of Ogawa are poorly presented at auctions, and the info about this artist is scarce. Still, his mystical maidens, accomplished very much in the style of Gustav Klimt and other European modernists, are very appealing to look at, so we share this beauty with you. 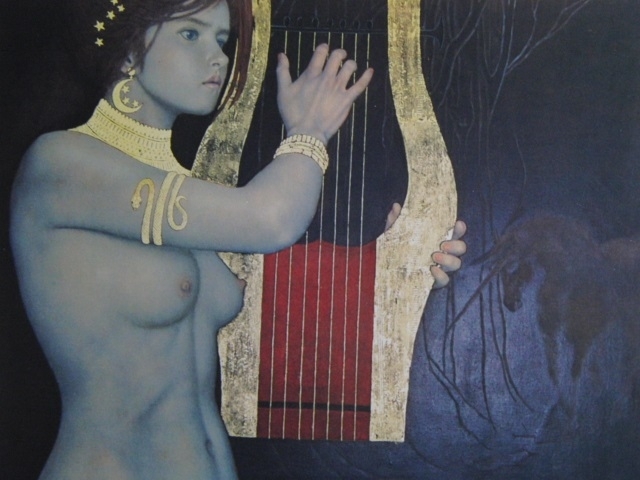 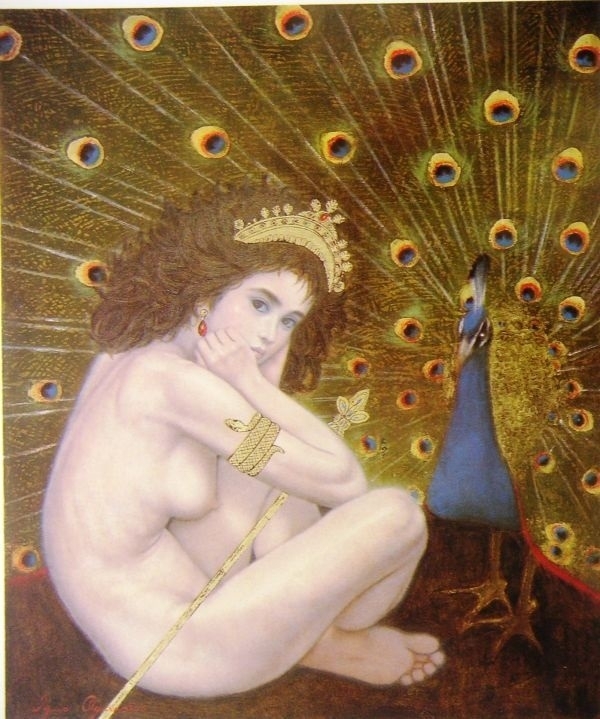 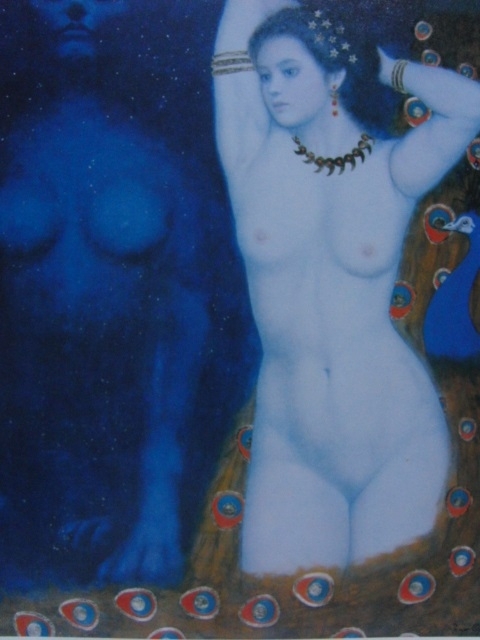 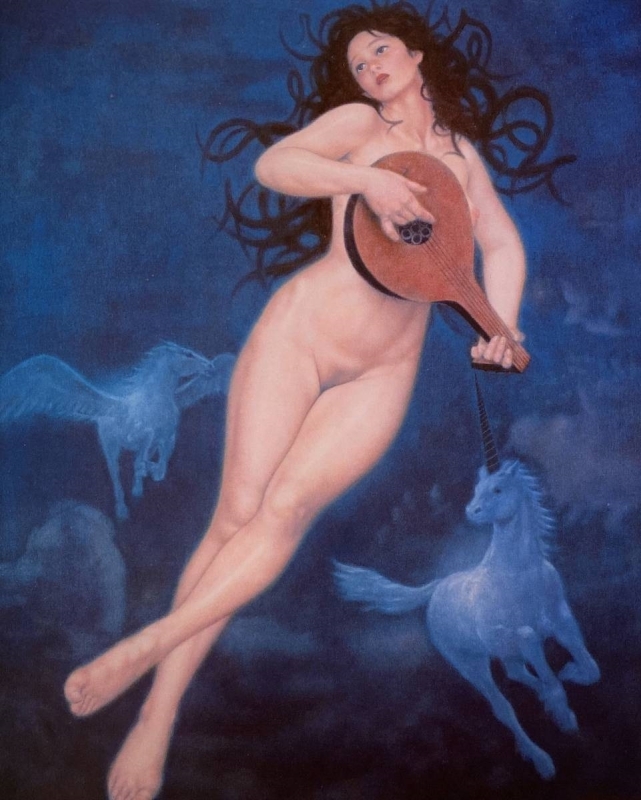 Ogawa was born in 1926 in Tokyo and studied fine arts at Nihon University. His teacher was Morio Nomura, known for his marvelous landscape paintings in the cubist style. Ogawa was a member of the Nika Association, founded in 1914 as an answer to the Meiji Art Association created in 1889. The Meiji Art Association was focused mainly on yoga art produced by those artists who studied abroad. According to the info from the official website, the Nika Association's purpose is "to make selections regardless of our art style while advocating the artists' creative freedom and respecting new values" (nika.or.jp). The Association holds annual exhibitions in the cities of Japan. In 1977, Ikuo Ogawa received the 62nd Nika Exhibition award and, in 1984, the 69th Nika Exhibition Member Effort Award. 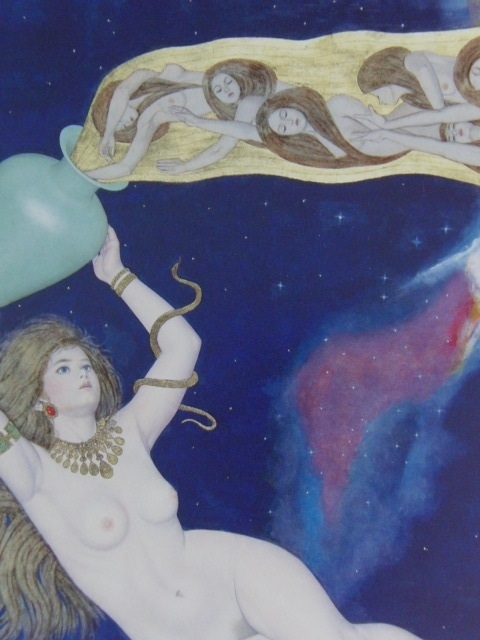 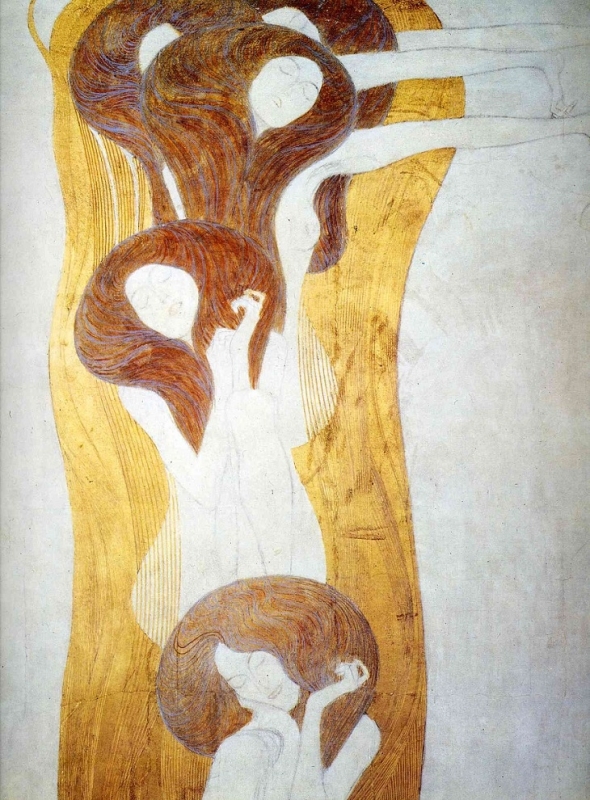 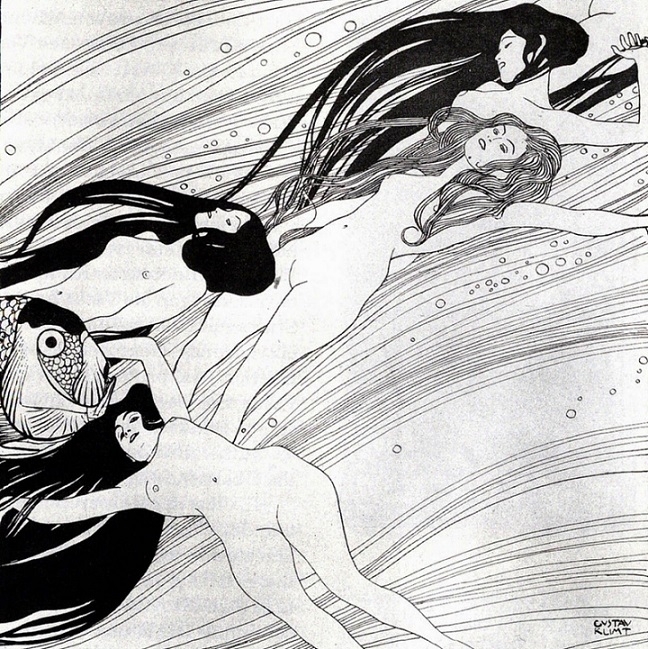 Ogawa's maidens, apparently drawn from one prototype, bear Klimt's influence. We see the same golden accents and similar allegorical figures. The girls depicted in Aquarius have recognizable appearances of female figures from the paintings of the Viennese artist and also from illustrations in Ver Sacrum modernist magazine. Ogawa's depiction of Venus sleeping in a shell resembles both Danae of Klimt and, conceptually, the sleeping Venus of Odilon Redon. 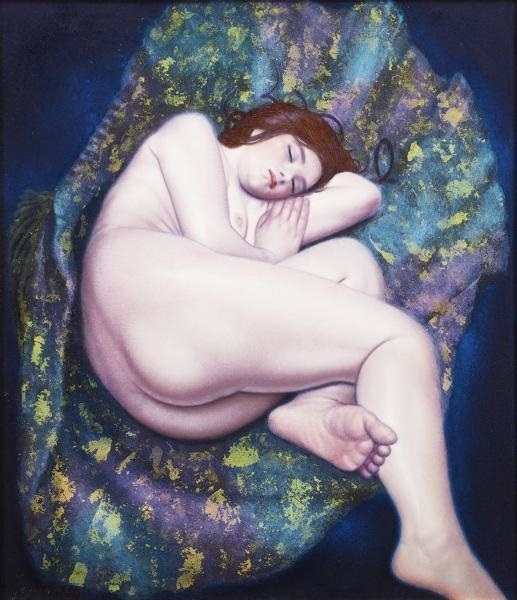 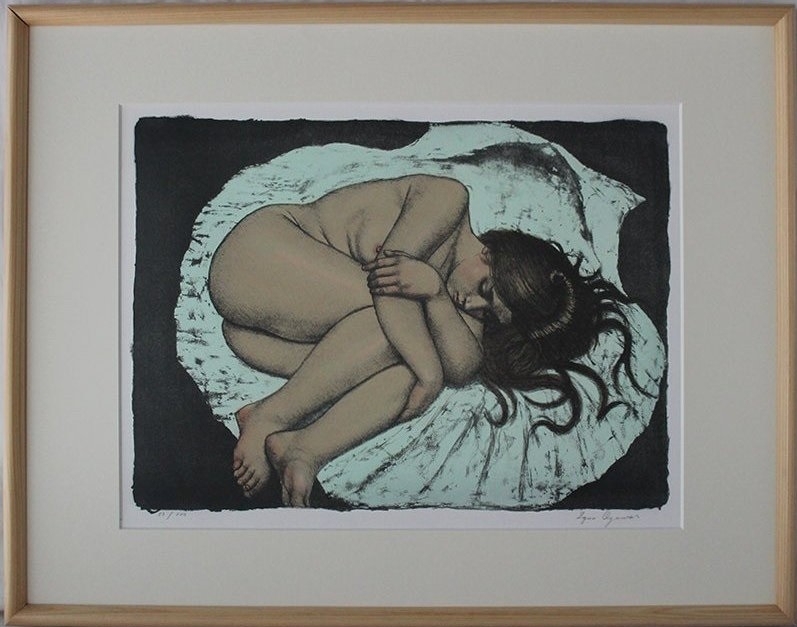 Before And After The Birth

The colors of the shell allow us to interpret the birth of the deity as a cosmic process. In Greek mythology, Eros is a basic driving force of the universe. Venus, depicted as a pearl emerging in shell-shaped space, becomes a symbol of cosmic order in general and life on earth in particular. Let's mention that Ogawa also produced a lithograph on the same theme, but this time Venus is depicted in a more accurate embryo pose, which makes us think that we witness a "prenatal" state of the goddess, though she wasn't really born, but miraculously emerged from the sperm of Uranus. The pose in the oil painting is a bit less similar to that in the lithograph, and the shell looks more like a crib, so the deity resembles here a classical image of an abandoned infant who is found in the crib by another god or the king, and who eventually becomes a prophet or a king himself (Moses, Oedipus). 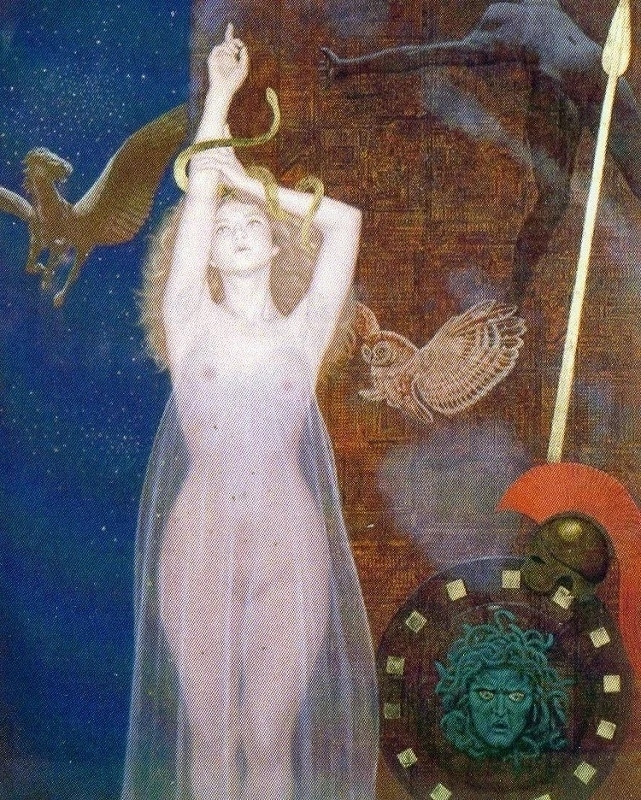 The Slaying Of The Chimera

This painting catches the attention of the viewer because of its' tricky way to convey the information to the audience. The real subject of the picture remains unseen as we look at the girl pointing to the sky. Judging by details, there must happen either the taming of Pegasus by the hero Bellerophon or the slaying of Chimera. Bellerophon, the son of Poseidon and a mortal woman, accidentally kills his brother, after which he is sent to serve Proetus, king in Tiryns. Proetus cleanses him of the crime, but his spouse falls in love with a hero and, being rejected, accuses him of raping her. So, the king sends Bellerophon to Iobates, his father-in-law, with a tablet reading: "Pray remove the bearer from this world: he attempted to violate my wife, your daughter." Before reading this, Iobates welcomes the youth as his guest, so, he doesn't kill him learning of who he is but gives the hero a task impossible to accomplish. Bellerophon must kill the Chimera, a fire-breathing monster consisting of the body of a goat, the head of a lion, and the tail of a serpent. 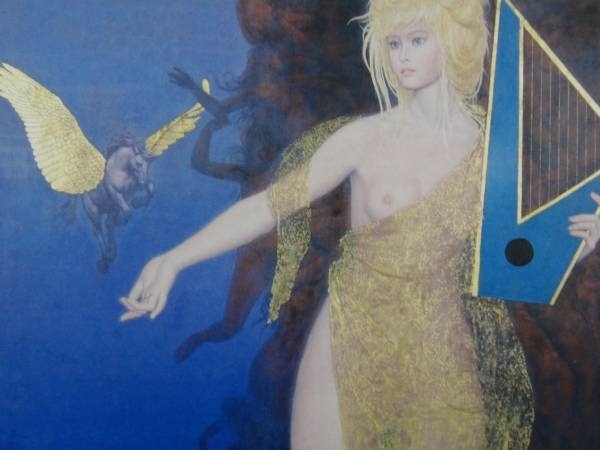 Fig. 11. Beyond the Barrier (auctions.yahoo.co.jp)

Corinthian diviner Polyidus tells the hero that he needs Pegasus and advises him to sleep in the temple of Athena. In his dream, Bellerophon sees the goddess who gives the youth a golden bridle and tells him where to find Pegasus. In Ogawa's painting, we see classic attributes of Athena: a spear, a helmet, a shield with the head of Medusa, and a flying owl symbolizing Athena's wisdom. At the same time, the naked female is hardly Athena, as soon as the image of this goddess usually is less feminine and more of a warrior kind. Considering the artist's adherence to depicting muses, we can suppose that the female is a muse, thus, the taming of Pegasus may symbolize the artistic training when a poet or a painter "tames" the inspiration. Moreover, turning artistic fantasy into reality can be described as "slaying the chimera," especially, regarding the therapeutic effect of the creative process when nightmares become oeuvres. 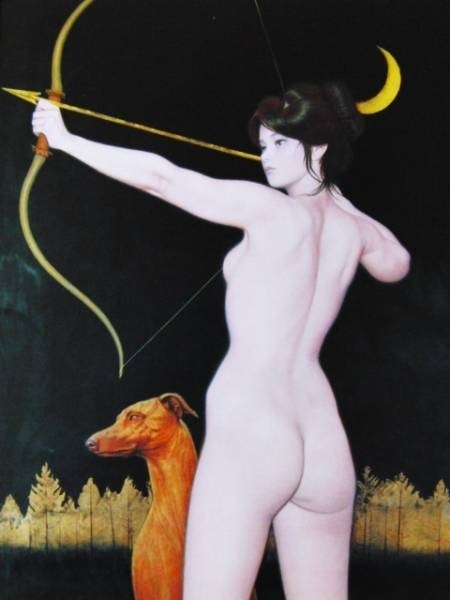 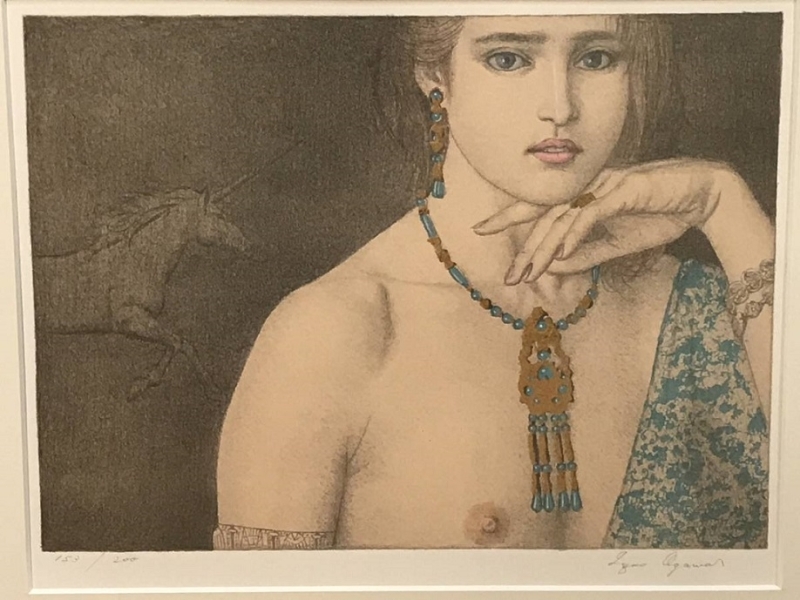 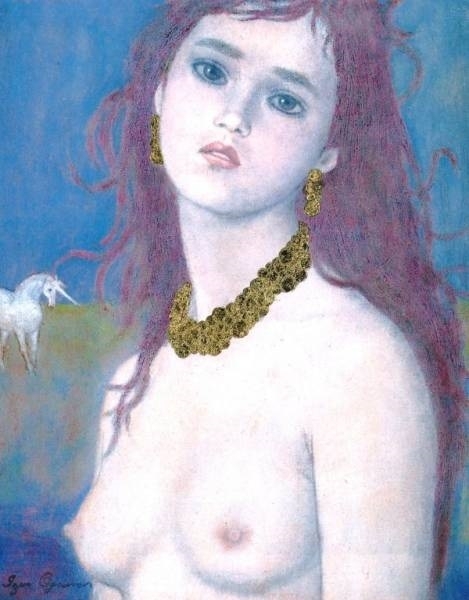 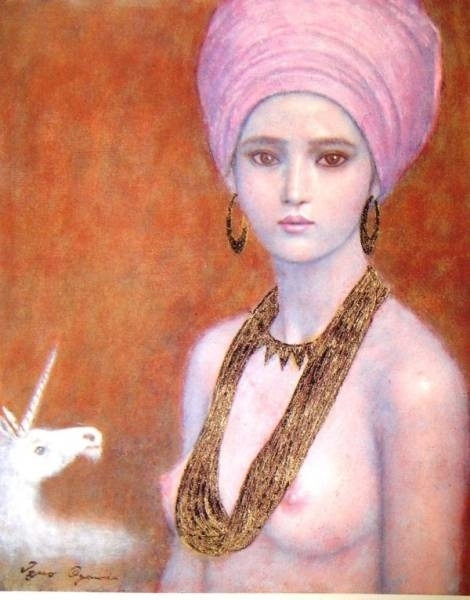 Fig. 15. When a Unicorn Appears (auctions.yahoo.co.jp) 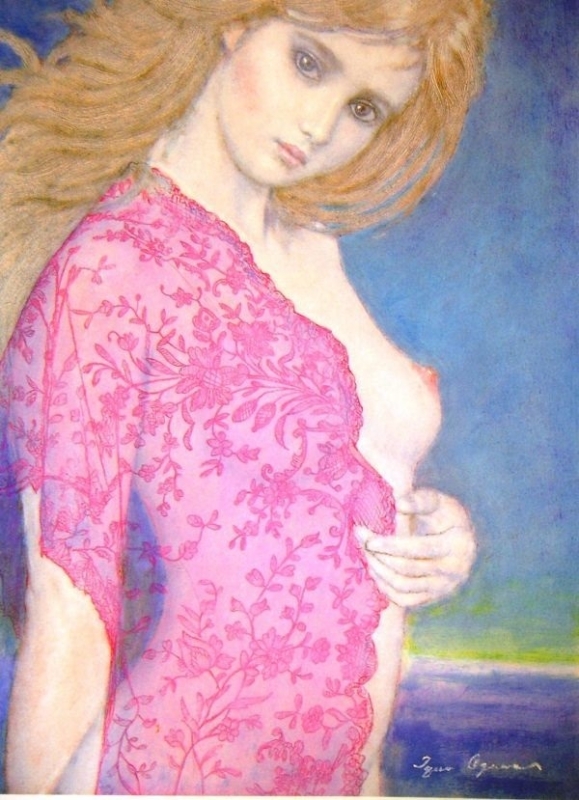 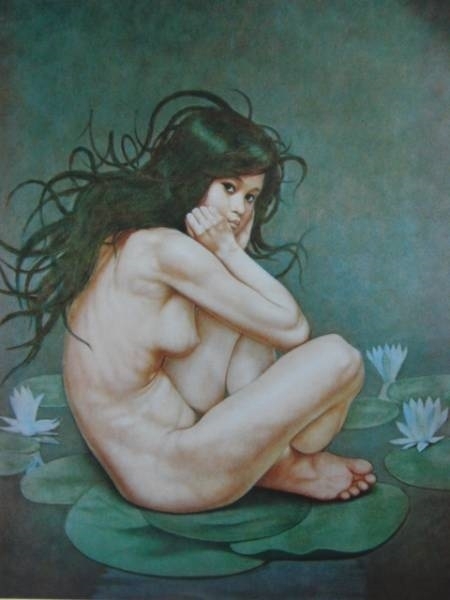