The Amusing Set of 12 Shunga Pictures Attributed To Torii Kiyonobu I, Part Two

Here’s the second part of our article about the shunga album attributed to Torii Kiyonobu I. In the previous part, we’ve examined Japanese obsession with wakashu boys and their hairstyle, which causes the difficulty in distinguishing between men and women in shunga pictures.

Fig. 1. Homosexual affair in front of the screen with a willow tree (britishmuseum.org) 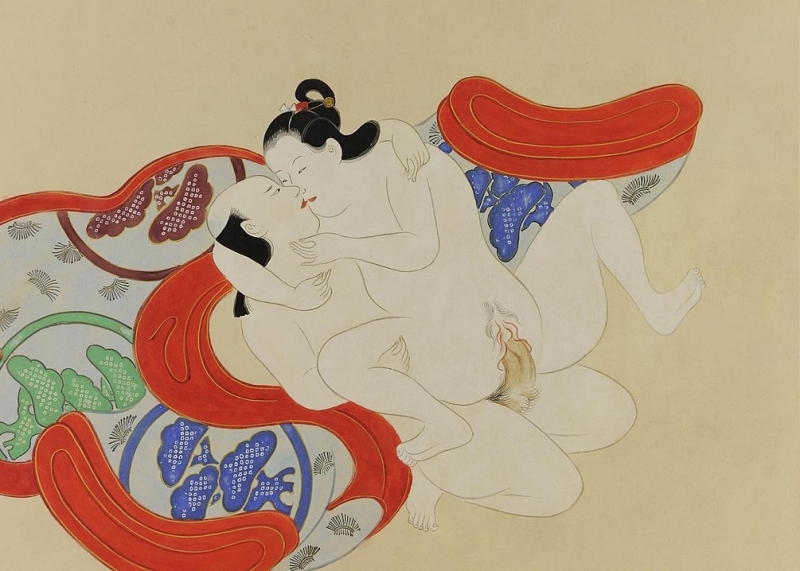 Fig. 2. Female-male copulation next to a kaimaki futon (britishmuseum.org) 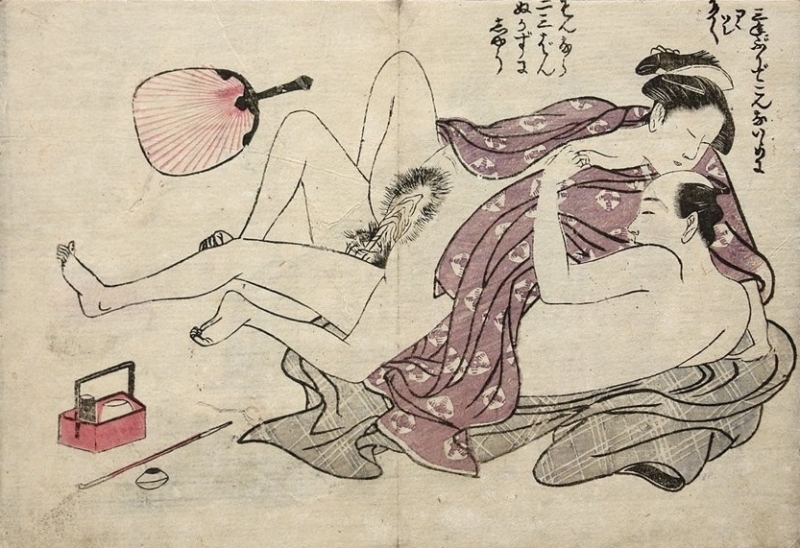 The heterosexual couple makes love in a cowgirl position on bedding (kaimaki futon) with a pine motif. The way the painter depicted public hair may draw your attention because classic shunga artists did it more realistically (compare with Utamaro's design with a similar cowgirl pose, fig. 2a). In the current set, male public hair is shown as it's supposed to be, while female public hair is symmetrical like a dandy's mustache. 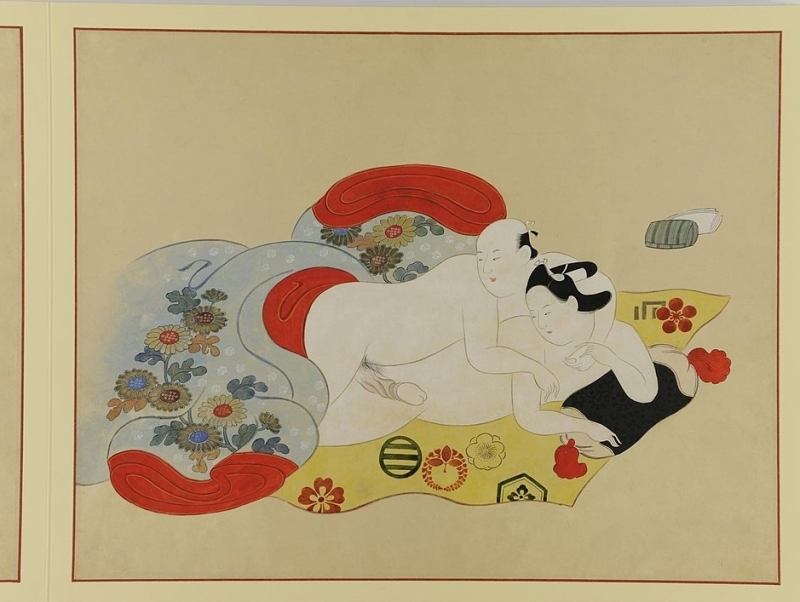 This heterosexual affair depicted in a relatively minimalistic way also features a kaimaki futon and a pillow (Fig.4). The woman is in a cowgirl pose. Interestingly, she looks at their genitals, which is both curious and exciting, while the man seems to look at her. If it wasn't for the soft touch of a hand, we could speculate on her indifferent attitude to a partner. 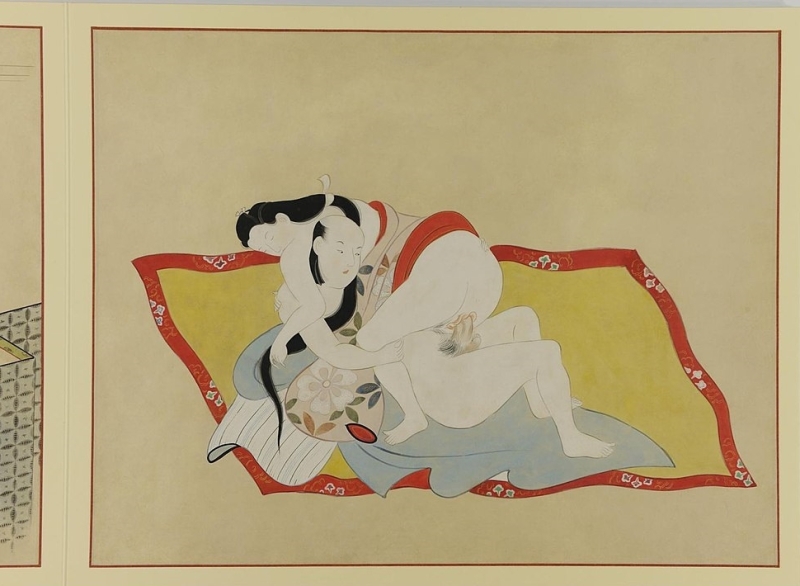 The next couple uses a cowgirl position again (Fig.5). The woman's hairstyle (a variation of taregami) may point to her noble origin as soon as we don't see any fallen hairpins around. Taregami hairstyle was popular in Japan during the Heian Era (ca. 794-1345) and emerged as a protest against Chinese fashion trends. This hairstyle had the same motto as Korean smoking pipes: the longer, the better.

Fig. 6. Homosexual intercourse in front of the screen with a depiction of a fisherman's boat (britishmuseum.org) 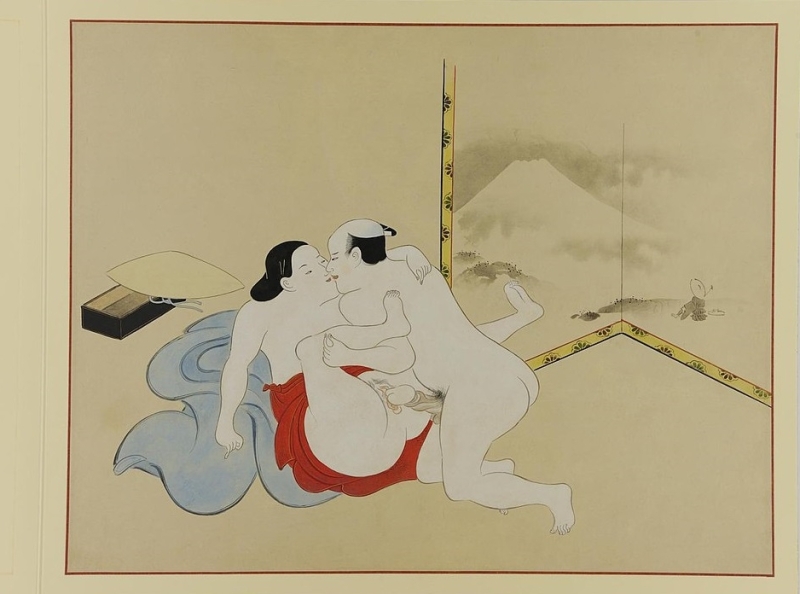 Sex Affair With A Buddhist Nun

The final image of the set (Fig.7) is described on the site of the British Museum as the affair with a Buddhist nun. In the painting, we see a headpiece of traveling Buddhist monks, though, nobody in the picture wears a tonsure which is an attribute of both monks and nuns in Buddhism. Yet, we don't know whether the female has hair indeed or it's a piece of cloth since male hair is depicted differently (we can see hairs drawn separately above his ear). Who knows, the scene we watch very well may be a result of the takuhatsu Buddhist practice. Takuhatsu implied traveling to various locations to chant sutras in exchange for food or money. If so, the performance of this lustful nun apparently was not so bad. The screen in the picture shows famous Japanese poet Saigyō gazing at Fuji. Here's one of his tanka poems:

Not stopping to mark the trail,

let me push even deeper

where bad news can never reach me! (allpoetry.com)

Let us know what you think about Kiyonobu's erotica in the comment box below...!!