In the penultimate eleventh plate from Isoda Koryusai’s oban-sized album ‘Shikido torikumi juniban ( Twelve Bouts on the Way of Sensuality),’* we watch a couple in an intimate embrace on a futon.

The woman’s obi** is hanging casually over a tsuitate***, that is decorated with a design of cranes, a common motif in Japanese art. Tsuitate were usually medium height (about 120 cm) and, like folding screens, were used to subdivide larger rooms.

Although this type of screen may seem rather low, they are high enough to obscure the people on the other side of the screen when sitting on the floor or lying down, as in this design. 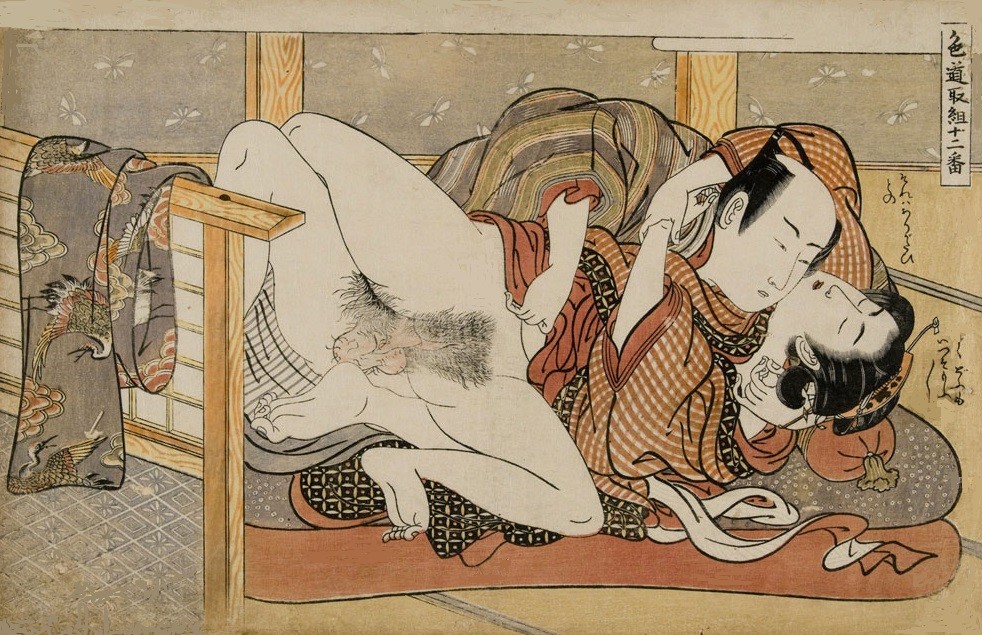 Tsuitate were designed in various types, some being more transparent than others. They were made of wood or bamboo and sometimes has removable parts, which could be changed along with the seasons.

The author and poet Carmelo Militano wrote the following poem based on this design:

Behind the couple is a wooden Tsuitate
Folded screen about medium height trimmed with bamboo
Decorated with flying cranes
She changes the scene according to the seasons, moods
Her large lipped manko grips his world
Open kimonos folded against each other
Bound together like exotic birds, wings spread
Ready to take flight.
You cannot see it, but their wax drips
As they reach for the sun.****

Click HERE for another striking design from this series…!!

*Shikido torikumi juniban‘ is a groundbreaking shunga album issued between 1775 and 1777, including designs with bold compositions in which the portrayed figures almost fill the entire image. This was clearly intended  to focus the viewer’s attention on the lovers in the image. The prints of this series, which are compelling and energetic, also breathe a more pornographic atmosphere than Koryusai’s earlier designs.

If you have any inquiries or suggestions please don’t hesitate to leave a reaction in the comment box below….!!

Thank you! Reading about Japanese interior one can understand that there is not so much of private space really.

Thanks Darya, the lack of privacy is nicely illustrated by the artist Shigenobu in his The Floating Bridge of Heaven series (1830), The man http://www.akantiek.com/shunga/Yanagawa-Shigenobu.Tattoo.Tattooed-Warrior.Brothel.Hooker.p1551.jpg" rel="nofollow">pinching his nose is highly amusing...!!

Yes, and subtly displayed by Shigenobu.