The ukiyo-e artists who seemed most fascinated by dreams were the 17th century ukiyo-e master Suzuki Harunobu (1725-1770) and his friend and pupil Isoda Koryusai (1735-1790). Below, some amusing examples of them are included… 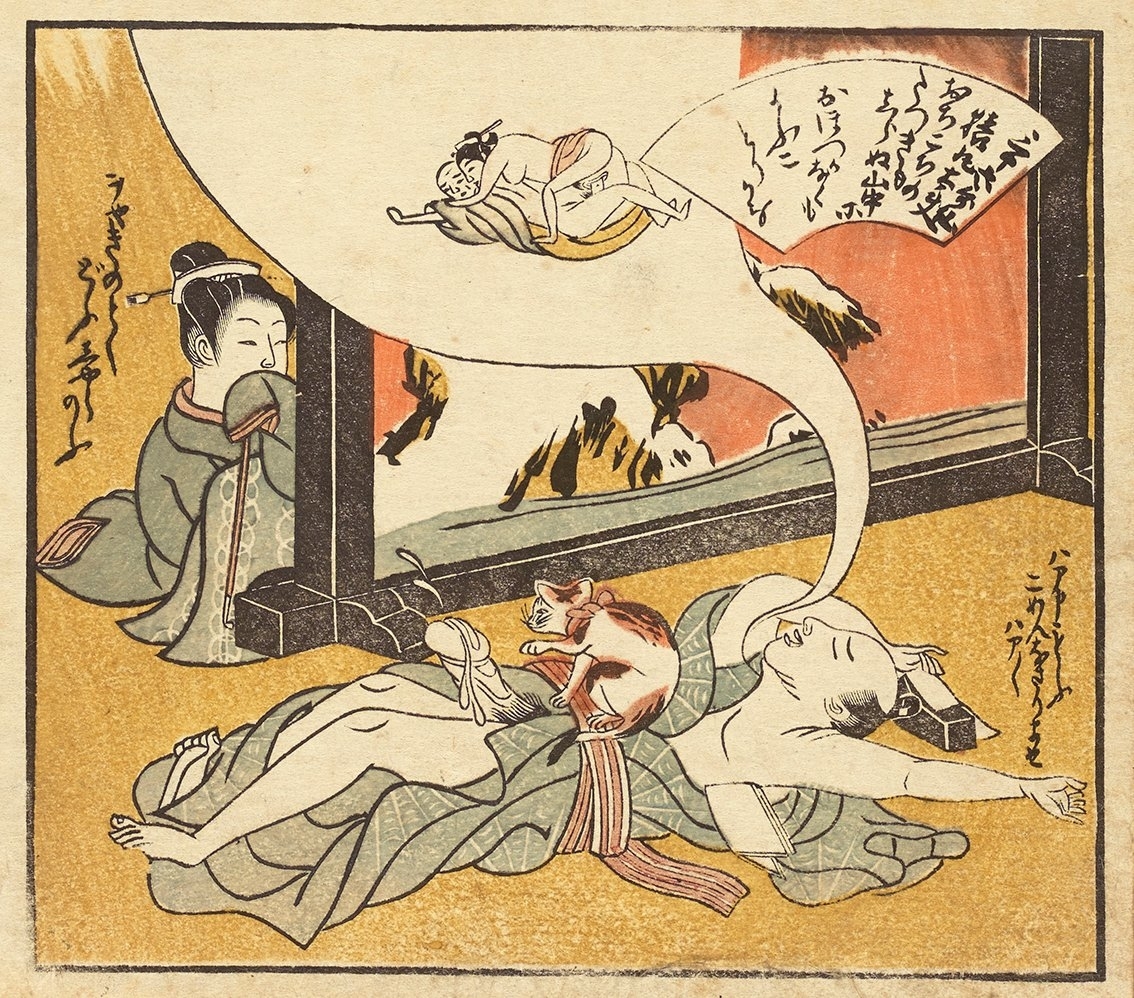 This diminutive work (c.1773) only measures 5″ x 5 /12″ inches. In these prints Koryusai’s strength of drawing is allied with the natural delicacy demanded by their modest size, resulting in an effect which possesses great charm and originality. This dream scene is an excellent example of this, with its humor spread over multiple levels. 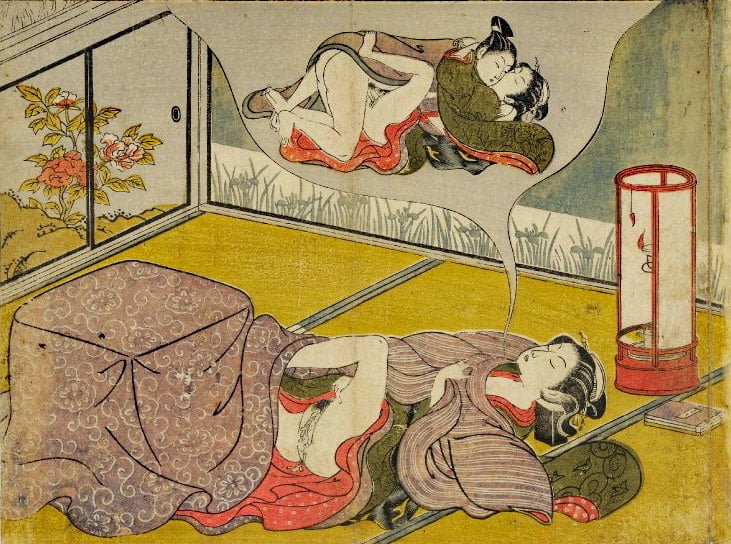 Seated at the kotatsu (covered brazier) on a winter’s evening, a woman’s thoughts have drifted, perhaps inspired by the book lying beside the lantern. The covers have fallen back to reveal the pleasurable effects of her fantasy. 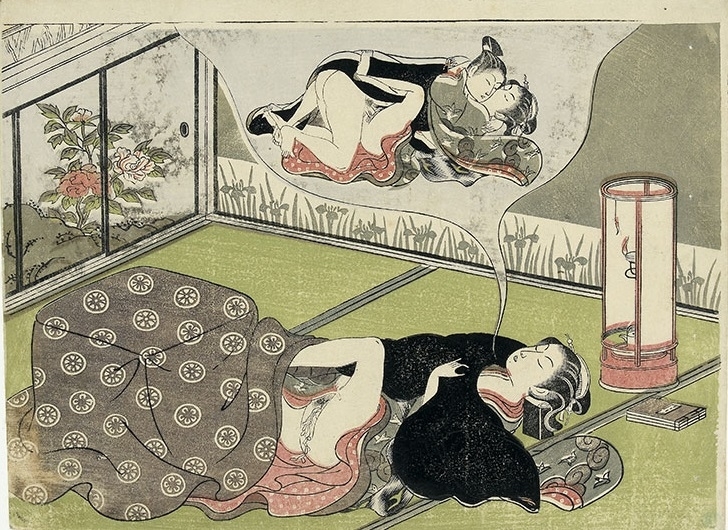 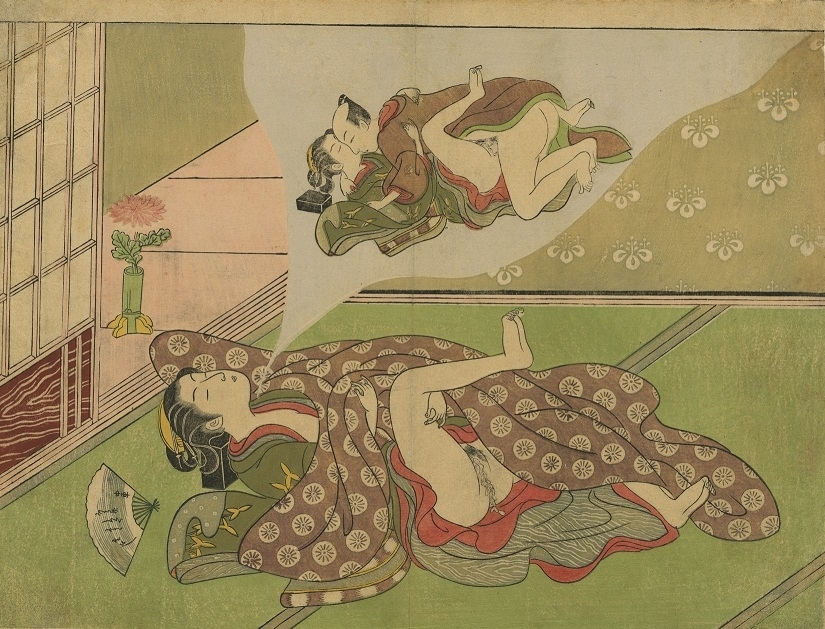 Part of the Varshavsky Collection

During a hot summer afternoon a woman is dreaming about love-making. Although it’s close to the style of Harunobu, the British museum attributes this design to Ippitsusai Buncho (act.1755-1790). It was issued around 1770. 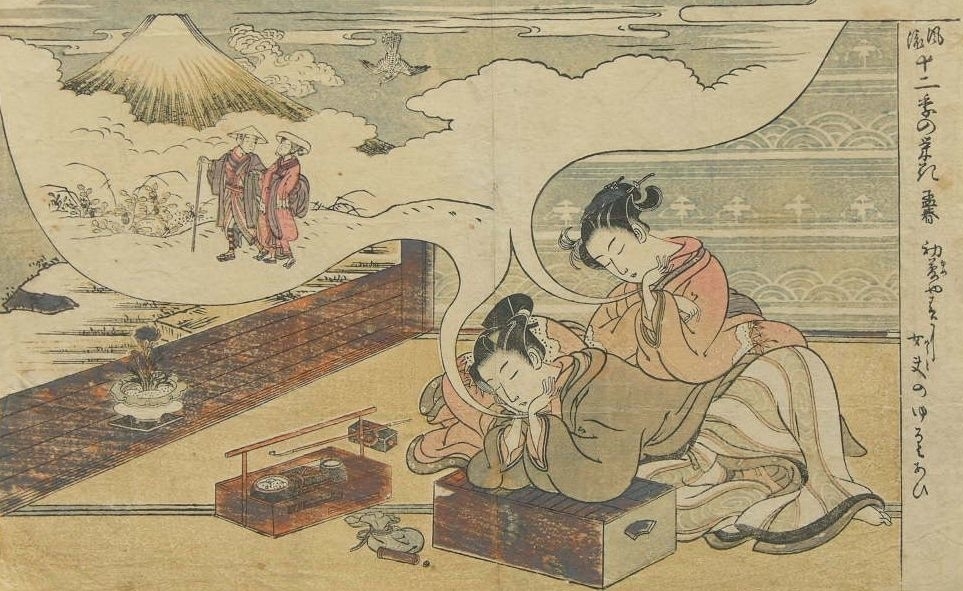 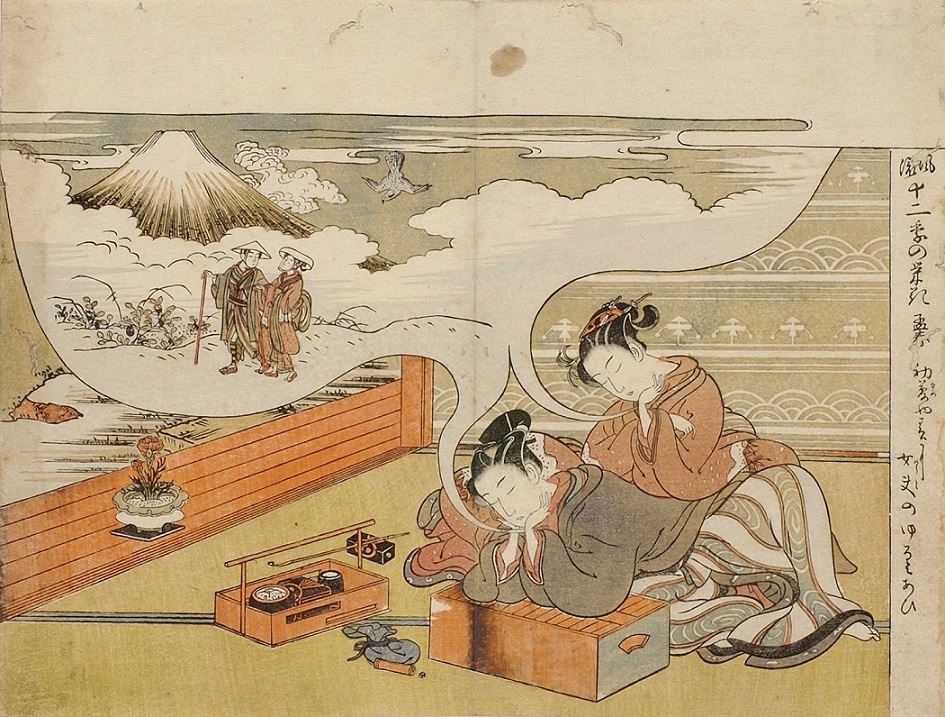 This is the first tableau of Koryusai’s series Prosperous Flowers of the Elegant Twelve Seasons that starts off with an innocent scene. The two adolescents who were playing the board game Sugoroku are taking a nap together. They are dreaming of traveling together to Mount Fuji. Depicted in their dream are a hawk and three eggplants. Apparently their wishes will come true. The potted plant on the porch is the Amur adonis which announces the arrival of spring and celebrates the new year. 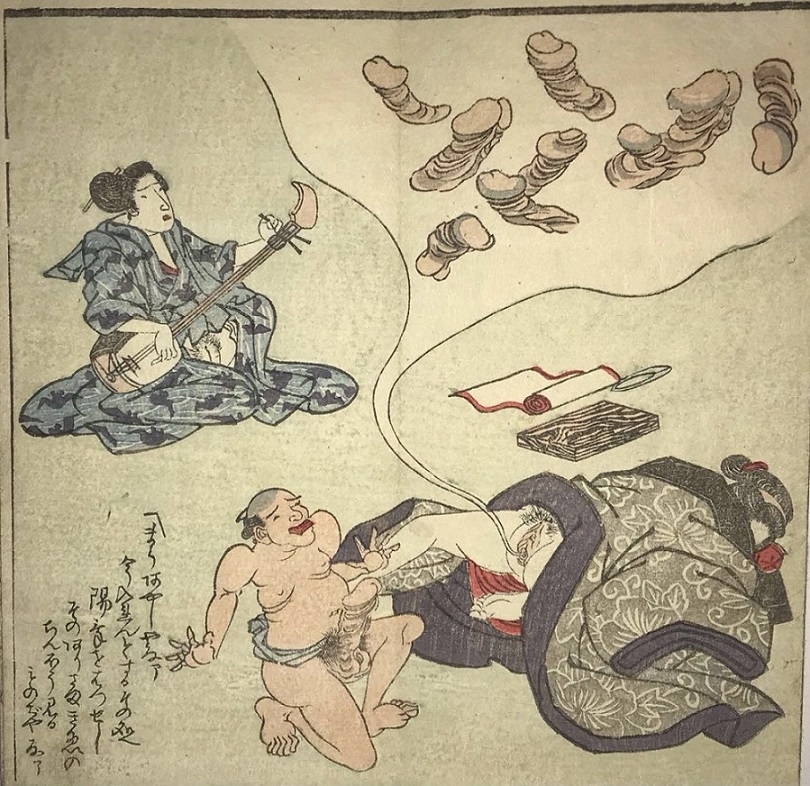 When it concerns thought clouds the default in the Edo period was that the cloud comes out of the neck* instead of the head (as in Western comics). In this rare case, the vagina is the starting point. The scabrous text reads, ‘Big penises, small penises, skin-covered penises, right turning penises. All penises know my hole.’ 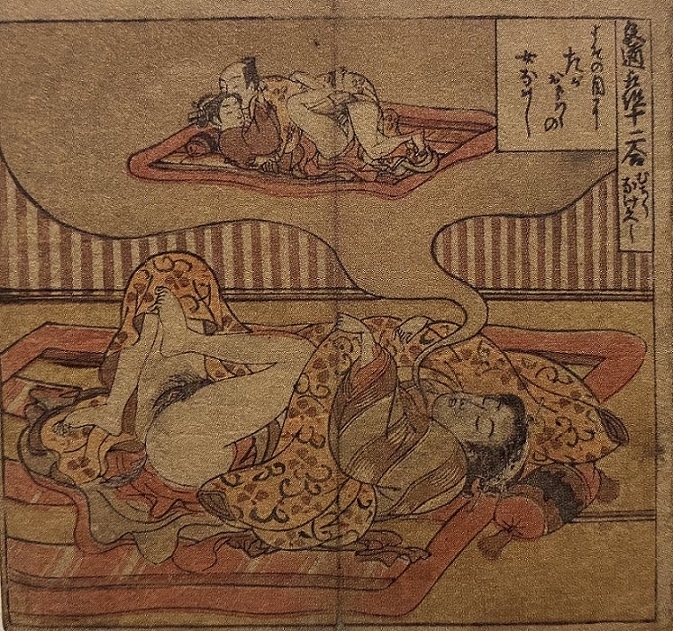 This young woman hugs the futon while dreaming of sensual acts. 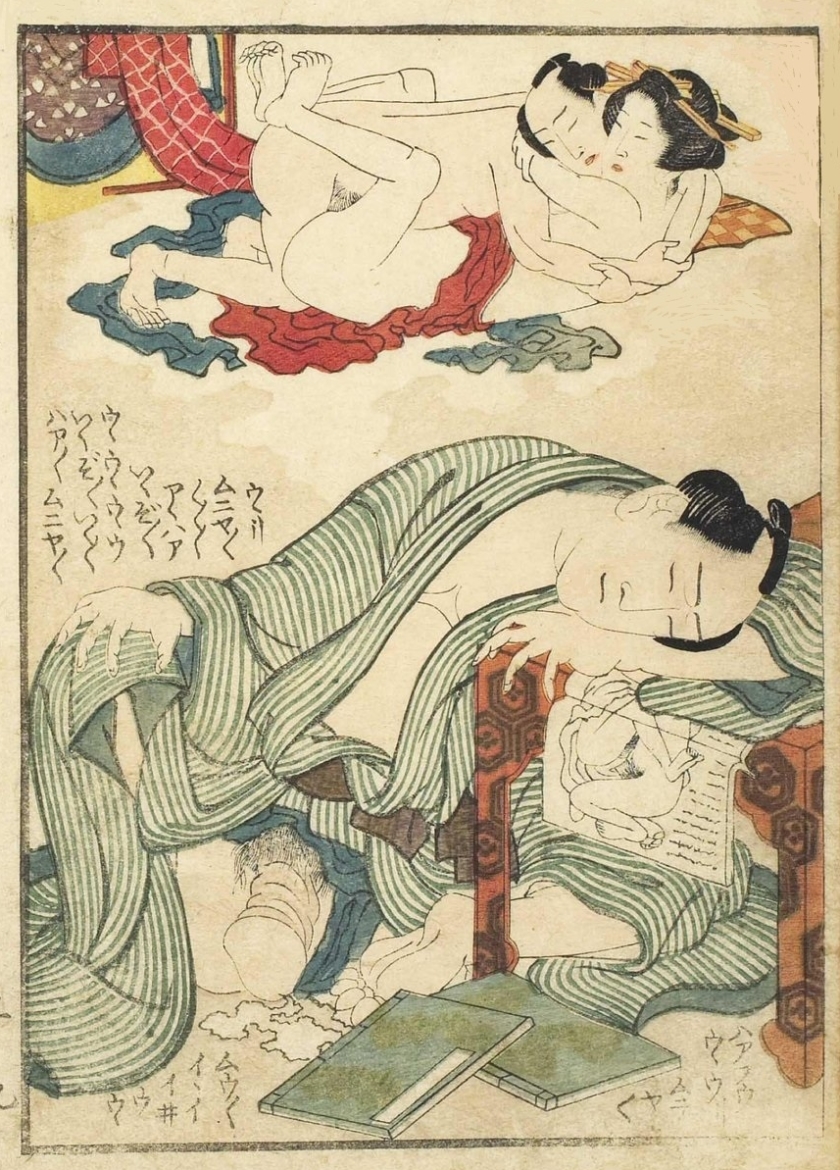 The thought cloud in this tobira-e (frontispiece) design (c.1820) by Katsushika Hokusai is difficult to distinguish due to its fading. A dozing man is absorbed in his wet dream. He leans his head and arm on the shunga book in front of him. The books clearly triggered his fantasy. 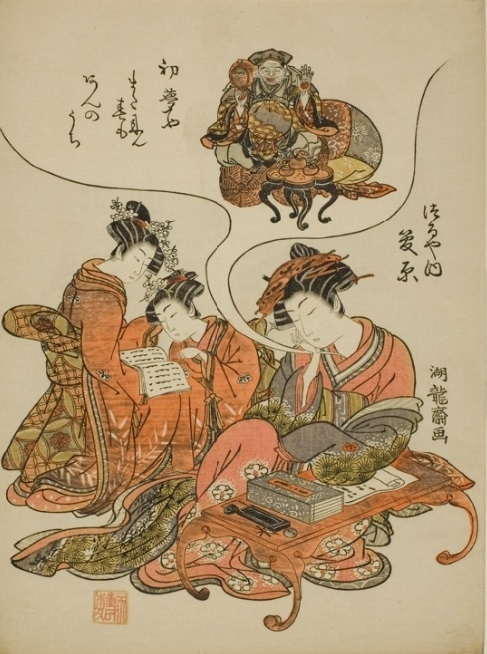 ‘Sugawara of the Tsuruya dreaming of Daikoku‘ (c.1778) by Isoda Koryusai (Housed in the Art Institute Chicago)

Of course not all dreams are erotically charged, this chuban-sized bijin-ga (print of beauties) design depicts courtesan Sugawara of the Tsuruya dreaming of Daikoku (aka Daikokuten), the god of wealth.

Click HERE for more articles on the important shunga artist Harunobu and here for Koryusai…!!

Great pieces! I love it.

Thanks a lot Sebastien!