Suzuki Harunobu (1725?-1770) was a student of Nishimura Shigenaga. He died when he was barely forty-five. Nevertheless, he is considered one of the greatest masters in ukiyo-e history. His activity as an artist coincides with the full development of the nishiki-e technique (brocade printing), for which very fine wooden dies were used and a ten-color printing was applied.

Harunobu's poetic world left a deep impression on the artists of the Meiwa period (1764 to 1771). Especially because of its female figures, which are petite, graceful and refined. But also because of the idyllic atmosphere that seems to prevail in his woodblock prints.

Harunobu was interested in the shunga genre and he realized several series of the classic chuban format. Next Dr Richard Lane Harunobu's style means the complete transcendence of the previous artistic standards of the Kambun Master and from Moronobu to Kiyonobu.

The following three designs are from Harunobu's masterpiece Enshoku koi no urakata (The Spell of Amorous Love) issued c.1766-70... 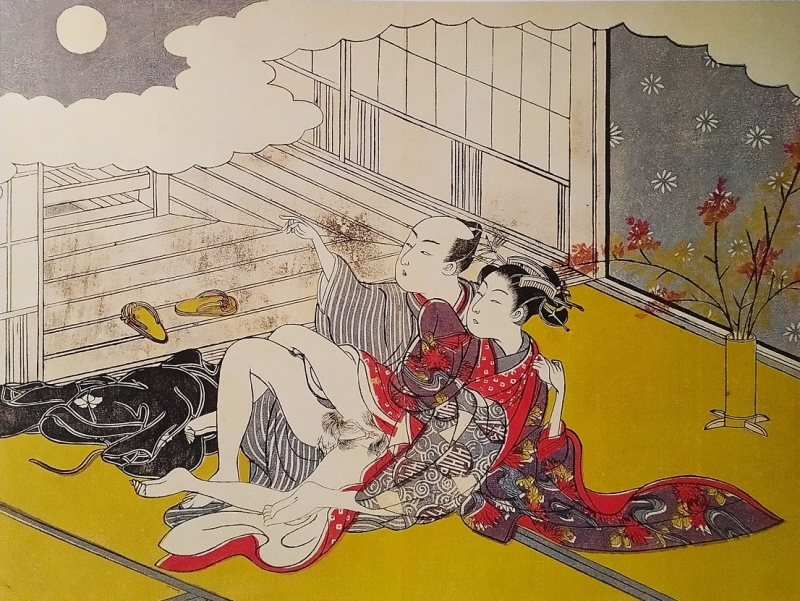 A couple making love watch the full moon behind the clouds (Fig.1). The woman's clothing is decorated with the Chinese character for 'long life' (kotobuki) and chrysanthemums (kiku) floating in the stream.

The chrysanthemum is the emblem of the Imperial house and is associated with autumn. Chrysanthemums floating in water are a popular theme in Japanese art and may relate to a Chinese legend. The story tells of a young man who heard a great disaster was about to befall himself and his family. He was able to fend off this ominous fate by climbing a mountain with his family, carrying a quantity of wine that had been seasoned with the blossoms and leaves of chrysanthemums. 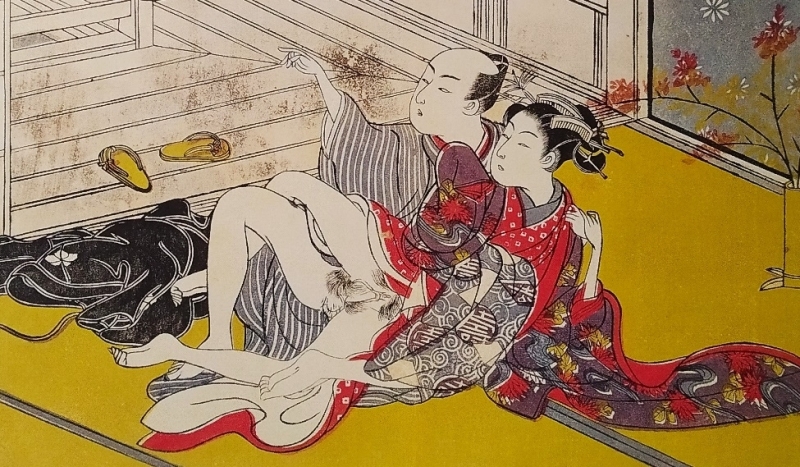 They all drank the wine, which must have been potent, for nothing serious befell the family. Guests at parties in the Imperial palace may have believed this tale, for they too indulged in kikuzake or sake, with .chrysanthemum blossoms floating in it. 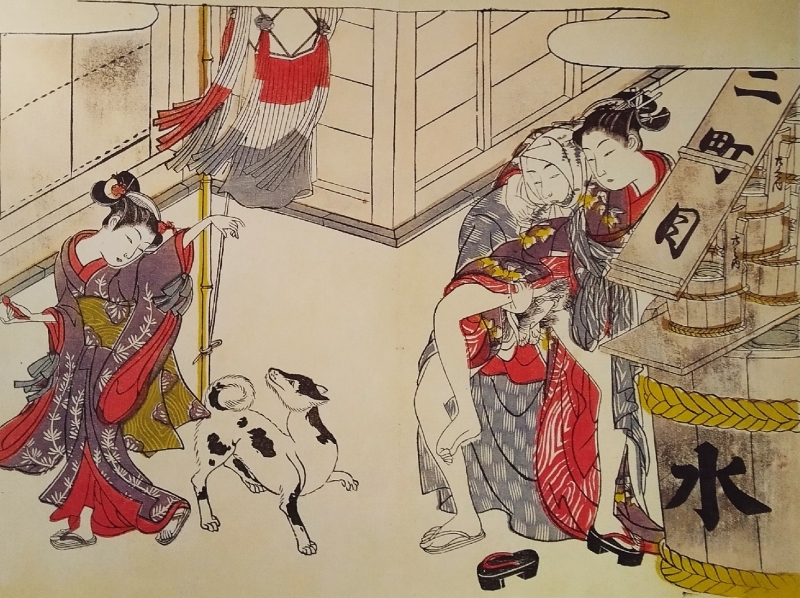 Unconcerned about the other couple in the street, a couple indulge in their lust near a pile of water buckets (Fig.2). The woman lifts her right leg to make it easier for the man to penetrate her. 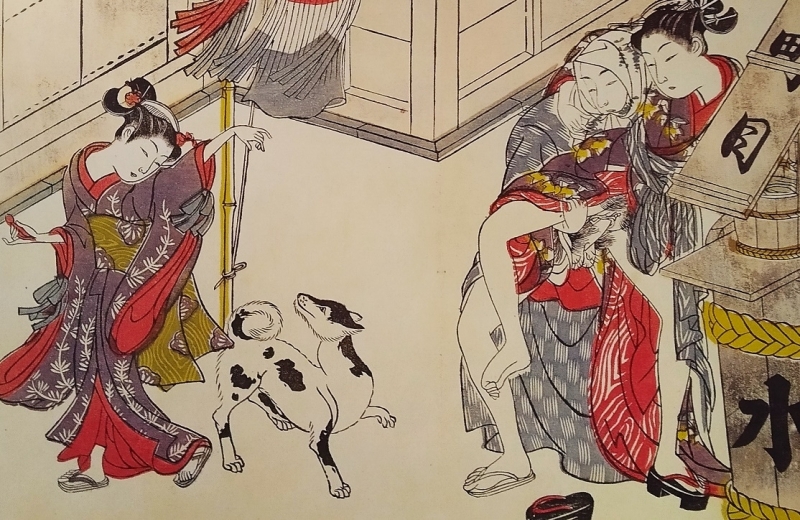 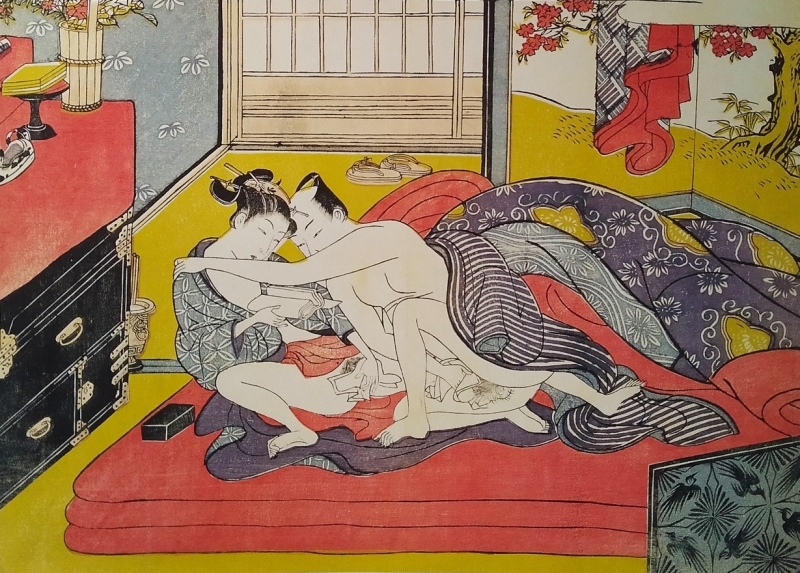 This couple have had their moment of passion, and having consummated their love, they now want to clean up and wipe themselves dry (Fig.3).. The package of tissues, which in most shunga appears nearly folded, now comes in handy.

There is a black-lacquered ishōdansu covered with a red cloth in the left of the image. A small podium has been placed on top of the chest of drawers, an dis either a kind of household altar or a podium for Girls' Day (hina no hi) on which dolls of the Imperial family were displayed on the third day of the third month. 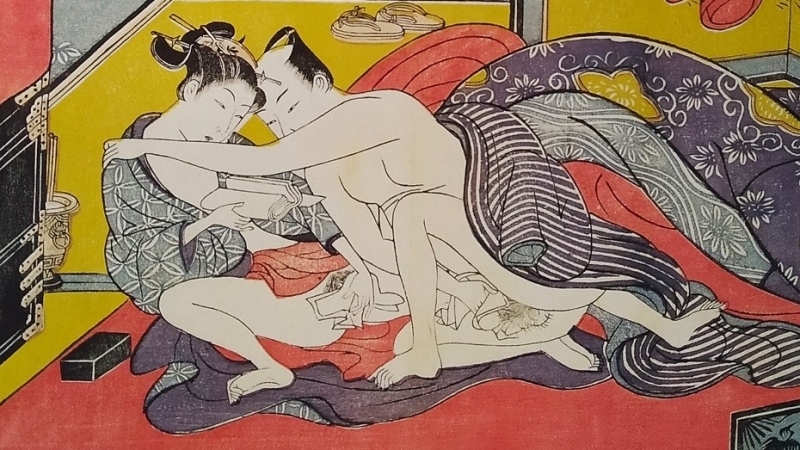 A hibachi and two sticks, used to poke the charcoals, can be seen next to the clothing chest. Hibachi, used to heat the room and keep tea warm, existed in many different shapes and sizes, and the more important the guest the more refined its design and manufacture. Rectangular-shaped wooden hibachi with copper containers for the charcoals are the most well known; besides these, there are round and chrysanthemum shaped hibachi, made of lacquer, porcelain or copper.

Who is your favorite ukiyo-e (shunga) artist? Leave your reaction in the comment box below...!!