The first design on the page is from ‘Sensual Colors, Phoenix Free in a Field’ aka ‘Sensual Colours, A Phoenix Released in the Field‘-series and is Isoda Koryusai ‘s first of only two oban-sized shunga series.

The second one is ‘Twelve Holds of Love a.k.a. Twelve Bouts of Love’ (Shikido torikumi juniban)‘ that was published between 1775 and 1777. The poses of the intimate couples in the designs from this series mimicked the poses of wrestling.

As known, shunga‘s were seldomly signed, but in this design Koryusai (he is one of the very few artists who now and then signed his work) added a red seal signature on the folding screen reading Koryu.

In the accompanying catalogue of the shunga exhibition (in 2013) of the British Museum the author Akiko Yano wrote the following on this design:

“…In another type of scenario, a child may come into a room where a couple are having sex, be surprised and say something in reaction that represents the child’s innocence and ignorance. Or, in other cases, the child may jeer at or make fun of the couple:

(Boy, five years old, smiling with his tongue sticking out): “Well. well, the neighbour has hopped onto my sister!”

Like his teacher Suzuki Harunobu (1725-1770) , Koryusai was a prolific artist. He was born of samurai stock and a member of the Tsuchiya family. After the death of his lord he moved to Edo (nowadays Tokyo) and became a woodblock designer.

Koryusai specialized in chuban (mid-sized) prints and hashira-e (pillar pictures) and also designed a substantial amount of shunga. His early work was reminiscent to the style of Harunobu but his human figures (especially that of the women) became more vigorous when he started to work in the oban (large-sized) format.

Koryusai was the first artist to use the oban format and it was his greatest contribution to the shunga genre. The format also introduced the enlarged portrayal of genitalia and became the basic premise of the design.

The above shunga piece (Fig.1.) is still available in our gallery and can be found when you CLICK on the following LINK ! 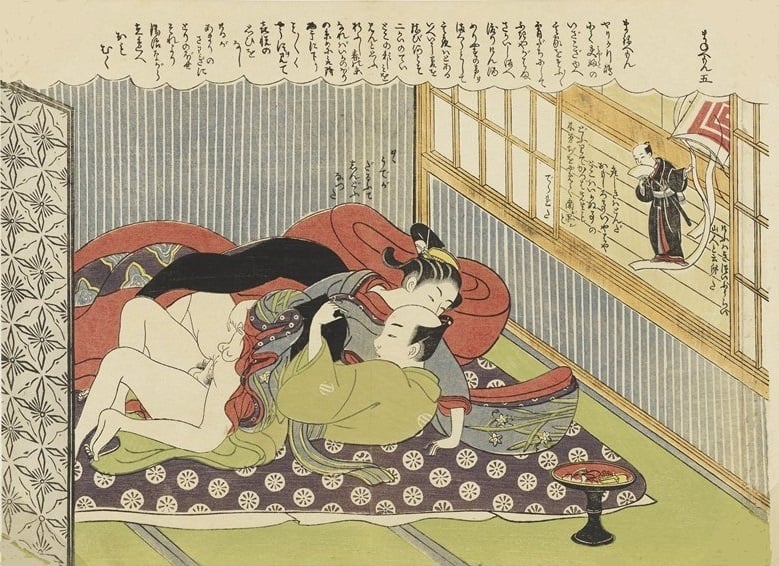 Have you seen a print from this series where a woman's kimono is decorated with rabbits? Very remarkable!

Thanks Darya. Yes, but I don't have an image of it.