Hilarious Shunga Book with Grotesque Erotica by Akatsuki No Kanenari

Kanenari was born as the fourth son of the well-known soy sauce maker, Izumiya Tahei. He developed his drawing style under the guidance of Shokosai Hanbei. He used several “Go” (studio names) such as Kimura, Meikei, Keimeisha, Kiya Yukishige and Gyoseio. 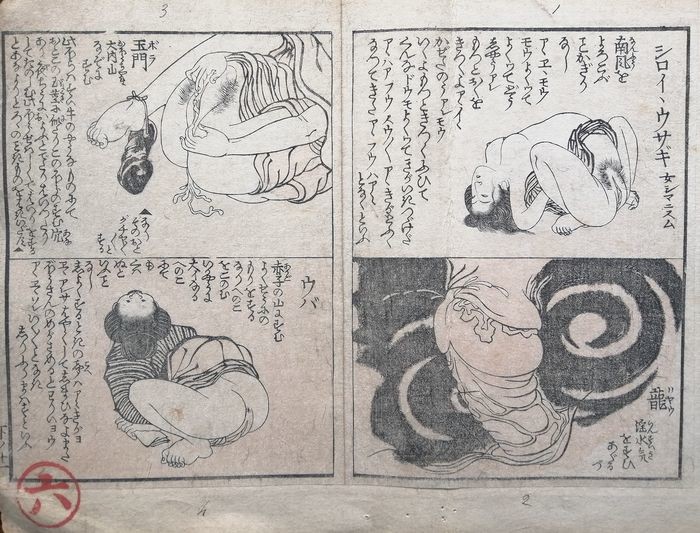 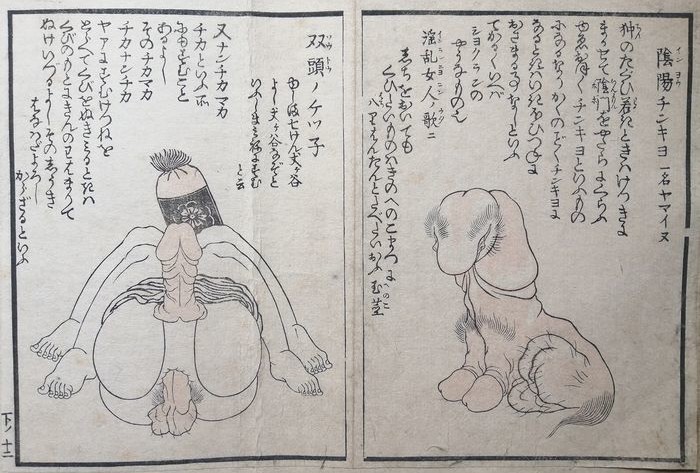 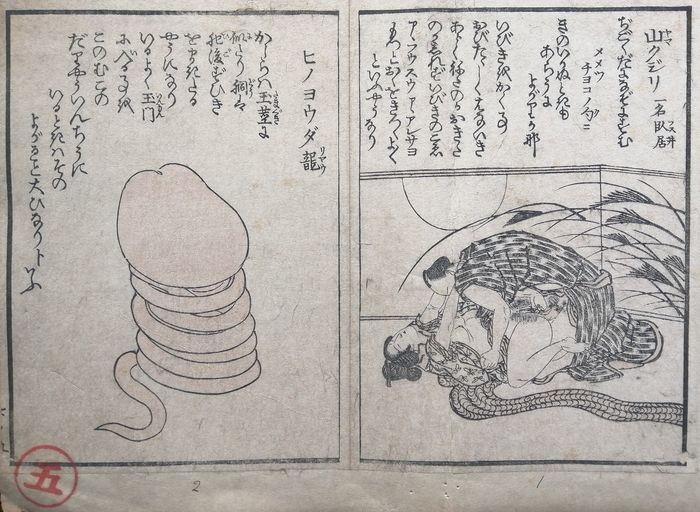 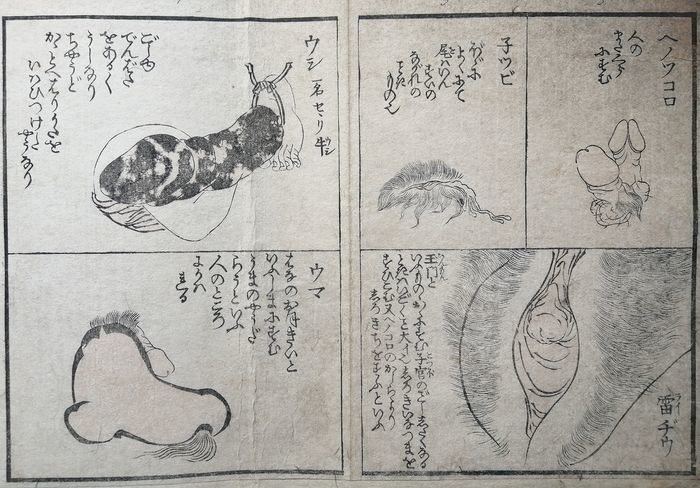 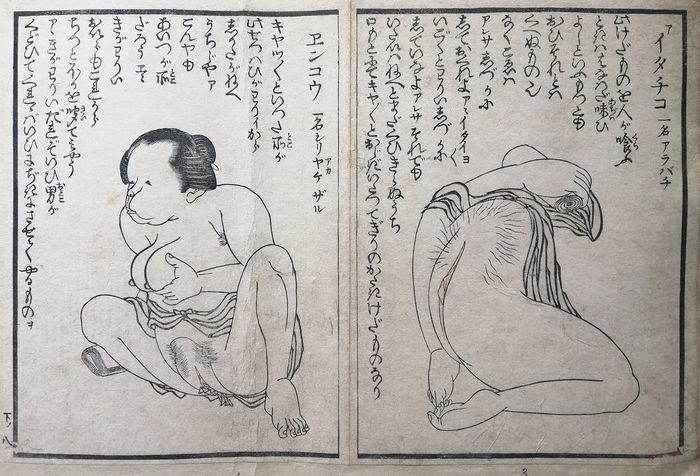 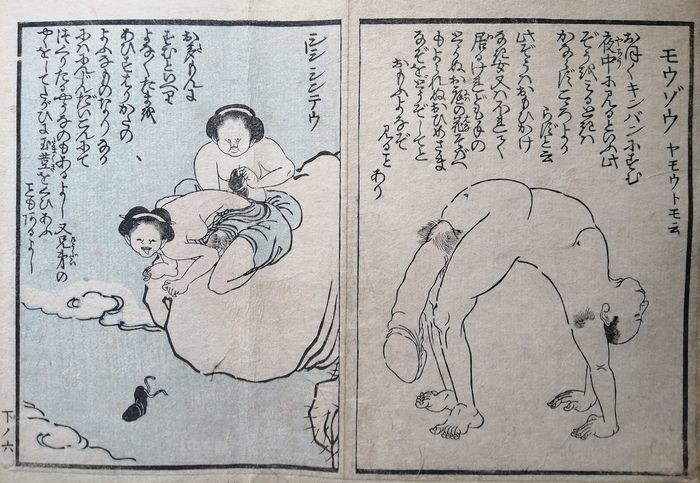 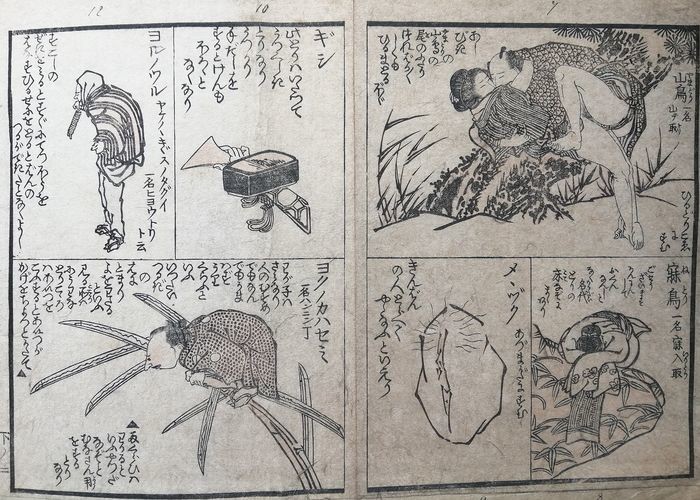 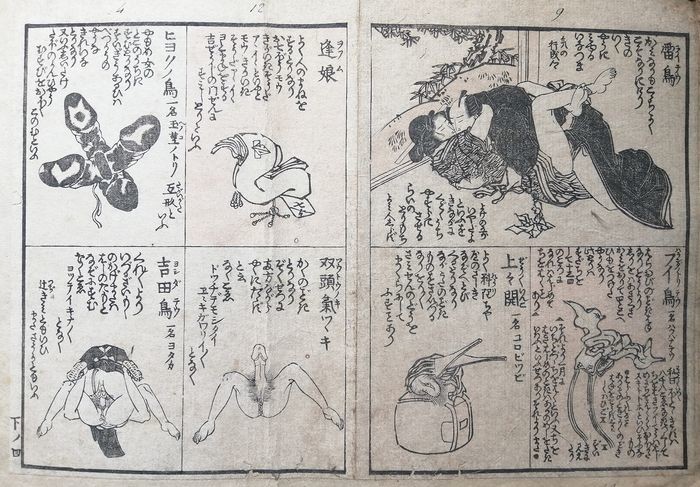 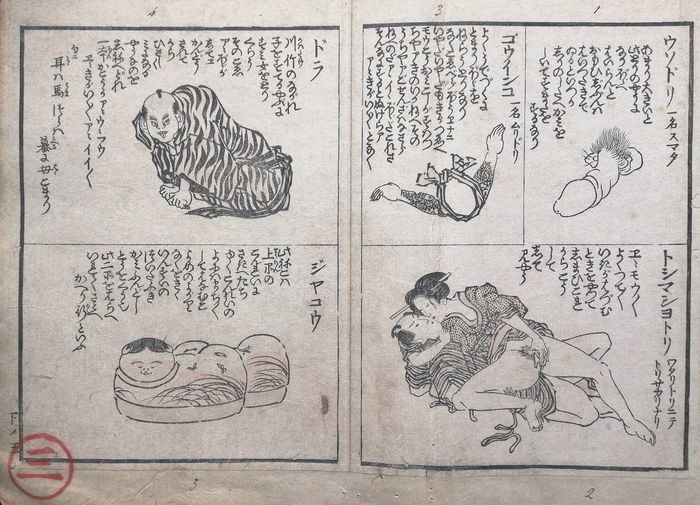 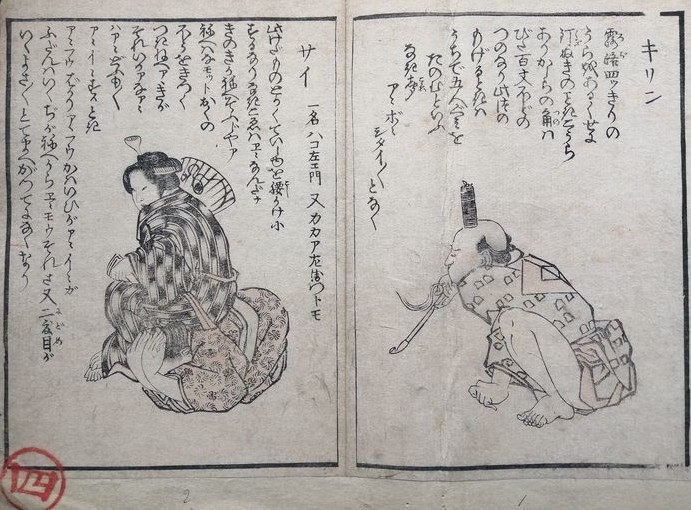 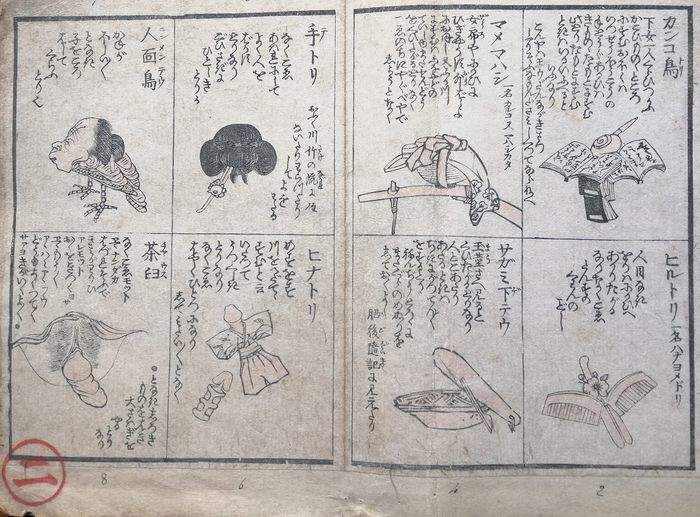 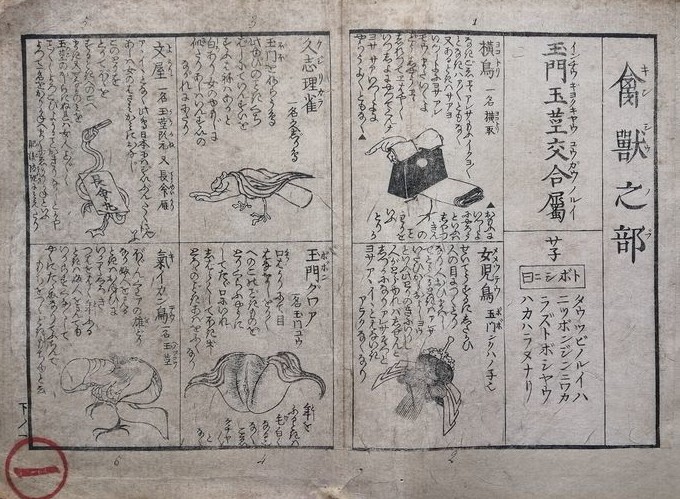 One of our devoted members Darya has send us the following additional images from a series by Akatsuki no Kanenari called ‘Bankoku shinwa‘ (c.1852)… 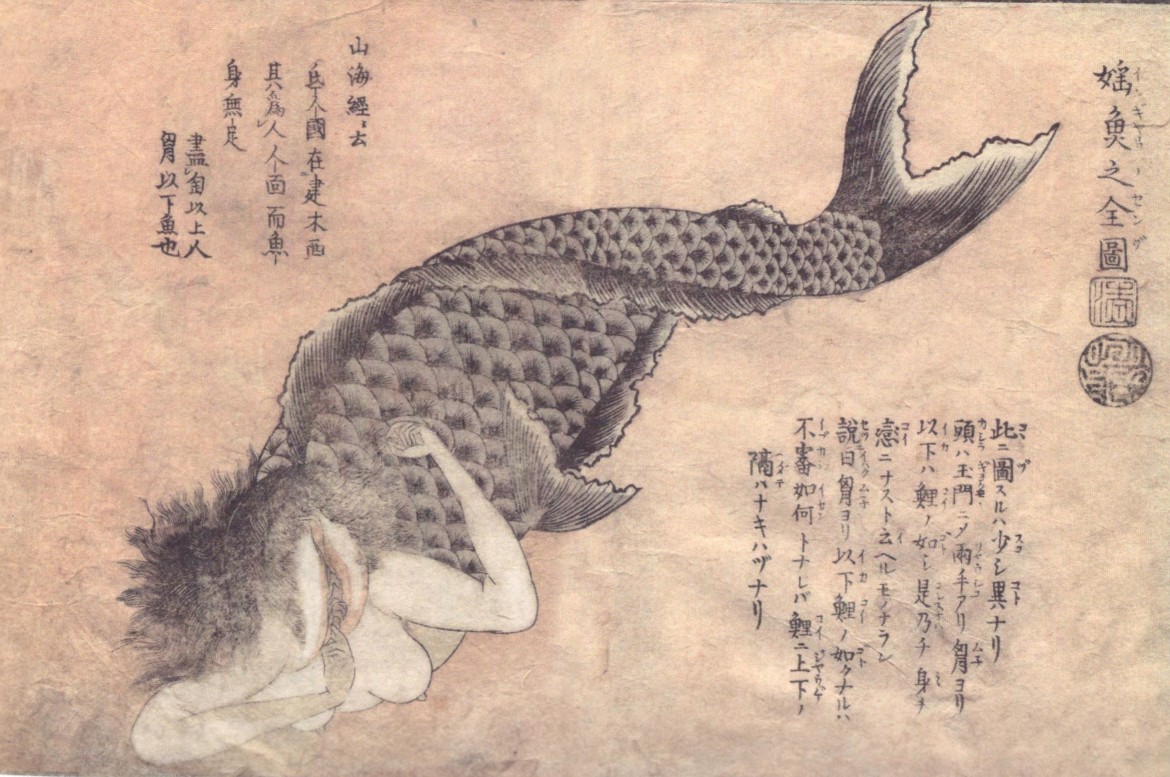 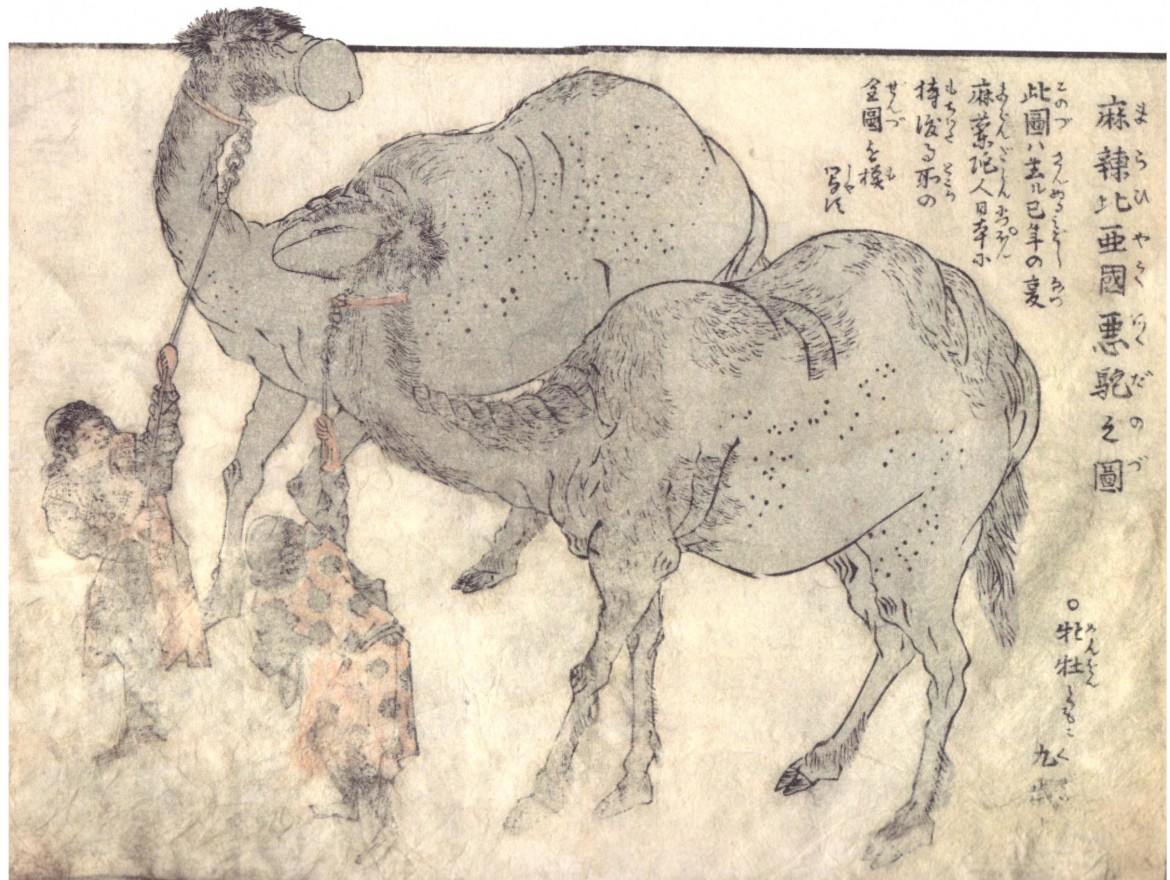 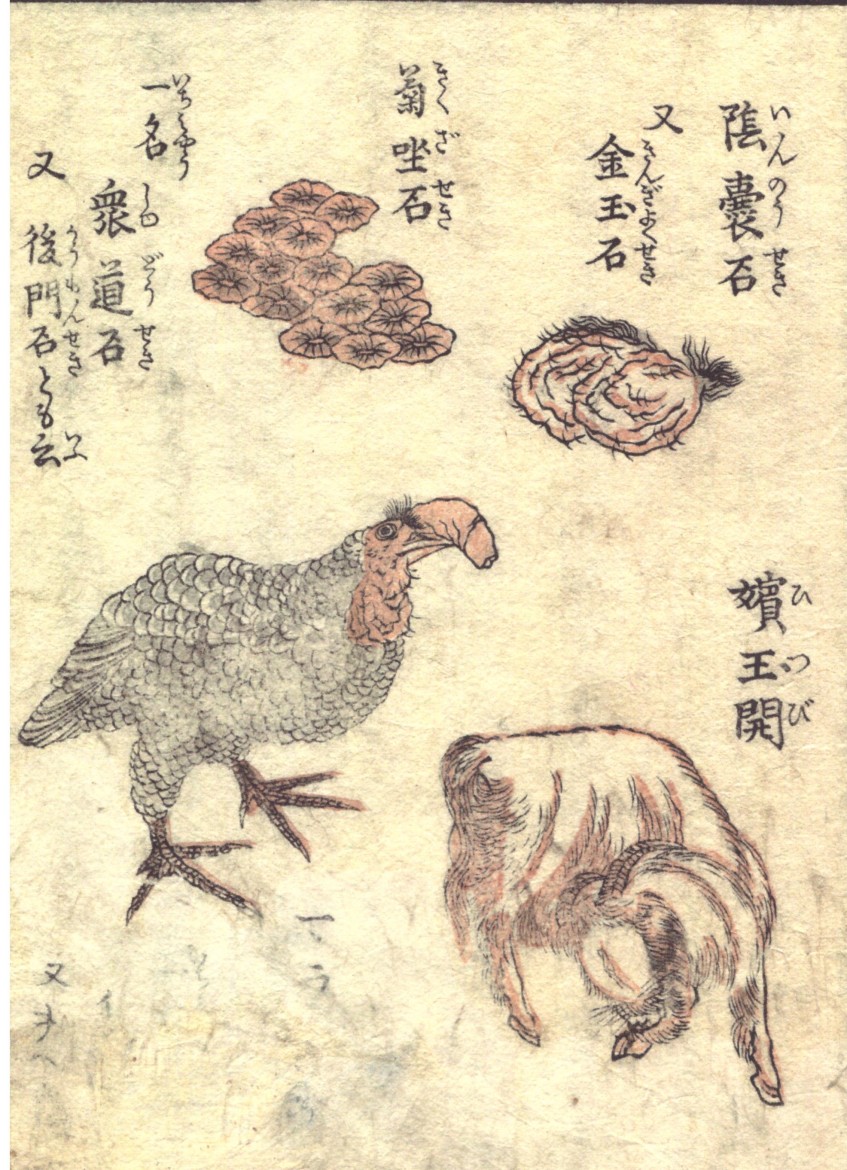 Fig.15. ‘Guinea fowl (below left) with a phallus-head and a goat with a vulva-head (below right)‘ (c.1852) from the series ‘Bankoku shinwa‘ by Akatsuki no Kanenari (Source: ‘Сюнга. Откровенное искусство Японии / Shunga. Explicit art of Japan‘, 2016. Authors: A. E. Pushakova, K. G. Danelya)

The following two designs (also provided by our valued member Darya) are cut from a rectangular page from the book series ‘Bankoku shinwa (new Stories of Ten Thousand Couplings and Buddings)‘, was issued in 1852 and designed by Akatsuki no kanenari…

The illustration (so both Fig.16 and 17) is entitled ‘Complete Abbreviated Map of the Two Fundamentals of the World (Ryōkon chikyū ryaku zenzu)‘, plays on maps of the world arranged in two large circles representing hemispheres.

Instead, the illustration identifies man as the ‘southern fundamental’ and woman as the ‘northern fundamental’. This method of representing the world as a man and a woman is based on part on ancient Chinese yin-yang thought, but it also incorporates new knowledge introduced from the West.

The skilful blending of various ideas in this way can be considered in particularly Japanese form of cultural expression.

Source: ‘Shunga, Sex and Pleasure in Japanese Art‘ issued by the British Museum

If you want to join our movement that advocates the uncensored display of sensual art, you can do so by becoming a member now.

For this, you only have to download one (or all) of our free eBooks….!!

If you are already a member and support our mission, we would be grateful if you could express your support in the comment box below (anonymously if necessary)..!!

Very amusing book! That's remarkable how it can satisfy people with different esthetic views being a mixture of grotesque drawings and depictions of beautiful sensuality. Kanenari's mermaid with a vulva-face from his 'Bankoku shinwa' series is a very memorable print also!

Thanks Darya, do you have an image of this "mermaid" scene by any chance?

Many thanks for the pictures Darya, I have included them above! In reaction to your additional remark whether the head of the dromedary (camel) is deliberately placed outside the frame of the design or not, I can say that the dromedary's head is suppose to stick out. In this way the artist gave the design an extra dynamic (to stand out!).This is often the case with the more exotic scenes such as the Eisen design with the http://www.akantiek.com/shunga/p1961.Keisai-Eisen.Japanse-Prent.jpg" rel="nofollow">monkey trainer from his 'Midare Gami (Hair in Disarray/ Tangled hair' series, issued c.1817.Akatsuki, in this case, goes to the extreme by also giving this long-necked "aliens" a phallus head.