The first edition was published anonymously by "a member of the women's academy" as it's said in the book. As honesterotica mentions, the names of the authors were given in later re-editions. In this article, we publish 8 of 17 Borel's images with our translations of Nogaret's quatrains. Though our texts don't repeat the original order of rhyming that varies throughout the set, we've managed to save the rhyme and the idea in general, so you can fully enjoy the edition and compare our English versions with originals. 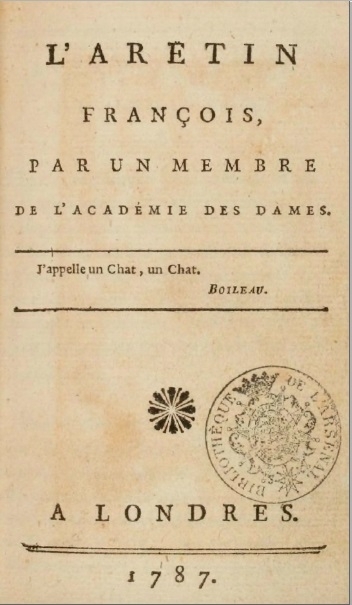 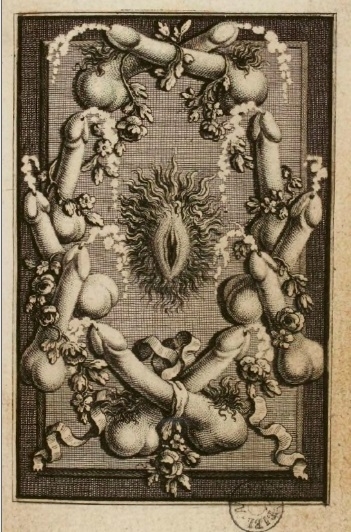 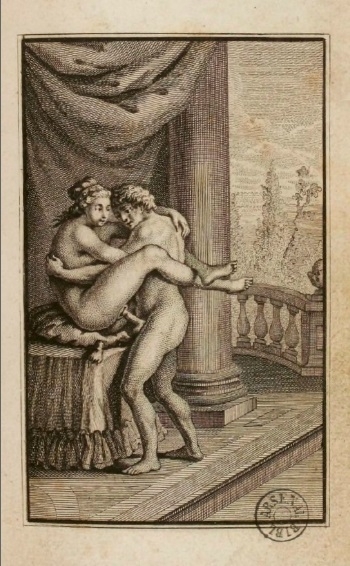 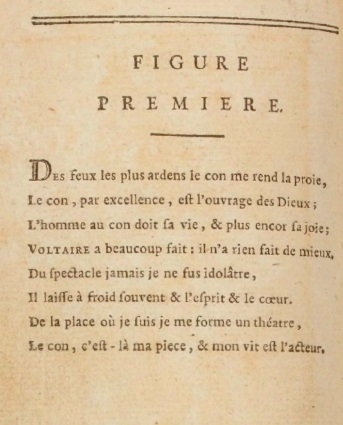 I can avoid it all except your flame,

The work of heaven or the trap of hell,

When other fires die, it stays the same.

I own it life and all my joy as well.

Voltaire did a lot, but rhymes and plays

Just can't outshine your light and seem a fraud

Since for another art I've found a place:

Your cunt's a stage; the actor is my rod. 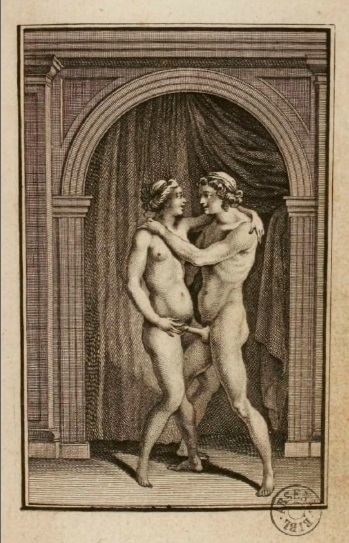 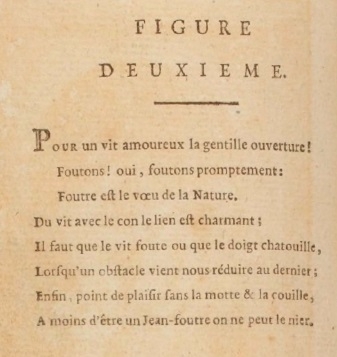 The overture; your cock's the one to please

Let's fuck, let's do it fast as nature tells,

This wish is followed by her kids with ease

The cock must harden in a skillful hand

Then we'll lie down together, you and I,

There's no such pleasure on the earth instead

Of what a fuckhead only can deny. 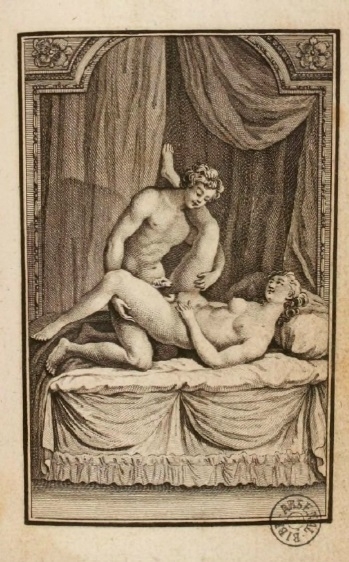 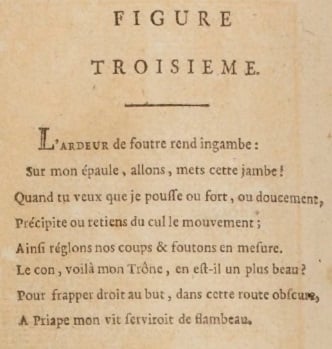 Insatiable, we have no time to rest,

Your leg is on my shoulder, that is best,

You want me now to push it soft or hard

And can control the process with your butt.

Let's synchronize our moves and play in time.

Your cunt's a throne that makes me feel sublime,

We strike a light for envy gods to watch,

My flaming dick could be Priapus' torch. 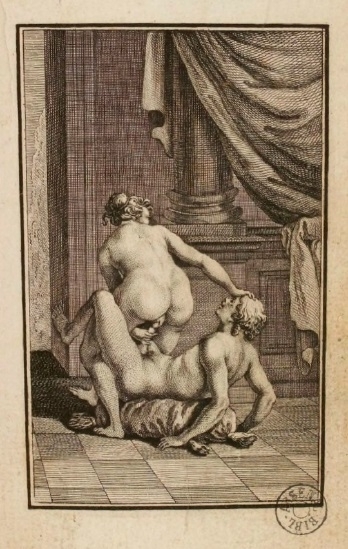 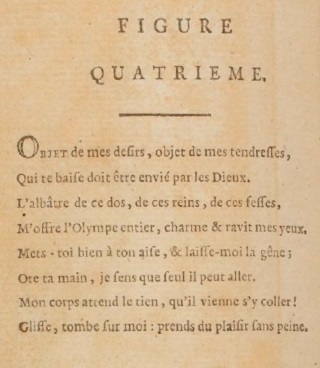 Pygmalion would surely lack the verve

To imitate the object of my bliss,

Your alabaster back and perfect curves.

No need for guidance – put your hand away

And stick to me, my one and only queen,

To take your part of joy without delay. 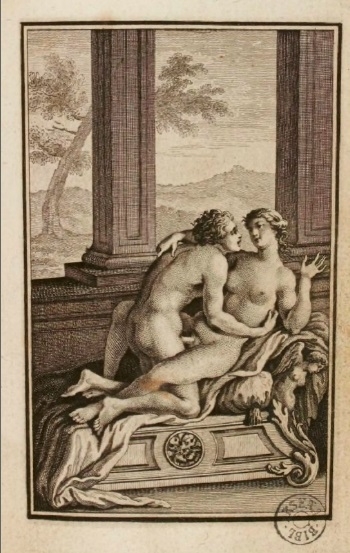 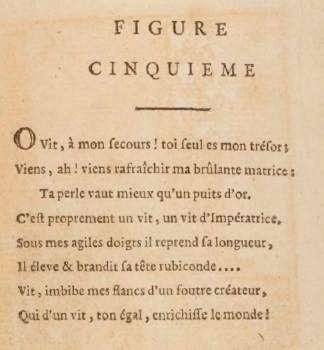 To whom except for you could I address!

- Your hidden gem is worth a royal crown.

- Your wand is for the empress to possess!

And nothing is more pleasant to behold.

This stem will fill me with desired rain,

The one who owns this dick must own the world! 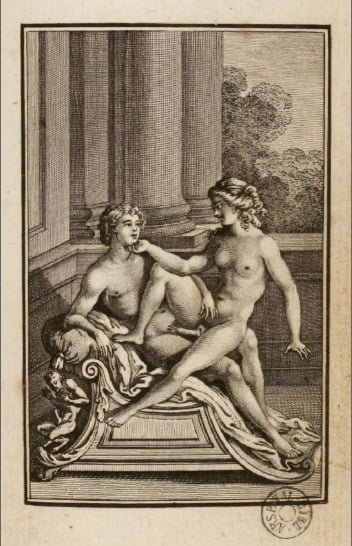 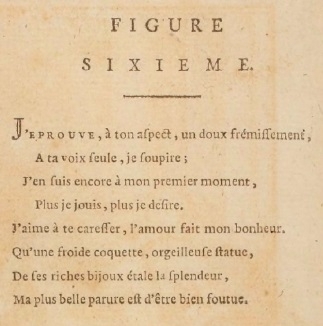 A gentle shiver at the sight of you

I feel this time, as at the very start.

Your whispers make me blush, though, they're not new,

Can't get enough of what is learned by heart.

As time goes on, desires only grow,

I feel the deeper thirst, the more I get.

Won't ever trade our little games, you know,

For pearls and jewels of a cold coquette. 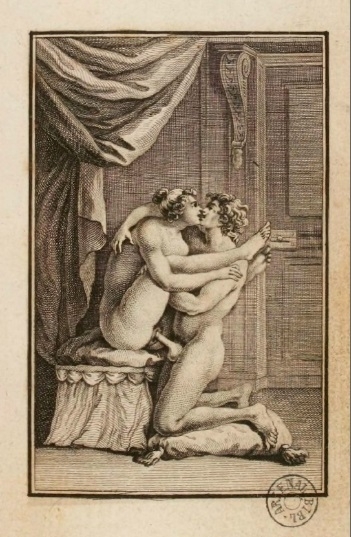 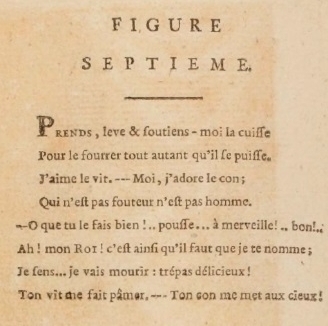 My womb as much as possible and more…

I love your cock! - And I adore your cunt!

Who doesn't fuck is not a man for sure.

This dick, it makes me die… The sweetest part!

- This precious cunt, it lets me join your death! 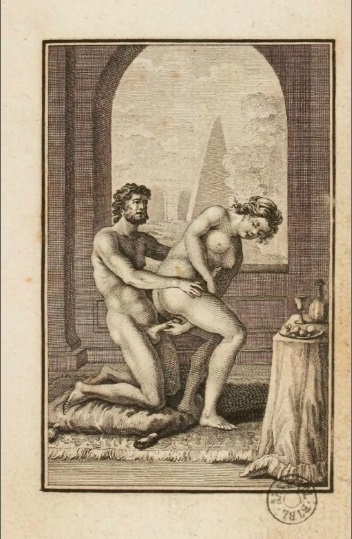 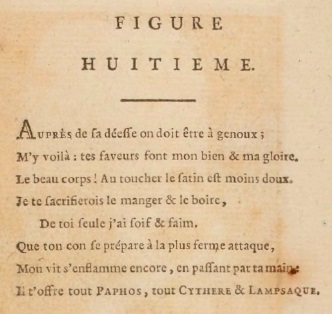 The sight of Venus brings me to my knees,

Your favors only let me stay alive.

Your skin's the satin, and your breath's a breeze

On which I live instead of bread and wine.

Prepare for the worship of my rod,

It's set on fire, passing through your hand.

Am I a timid pilgrim on the road,

Or an intruder in your promised land?

In the next article, we’ll publish the rest of pictures and poems!

Click HERE to check out the ancient ways of lovemaking in “I Modi” by Agostino Carracci....!!