Ancient Ways of Lovemaking in “I Modi” by Agostino Carracci, Part I 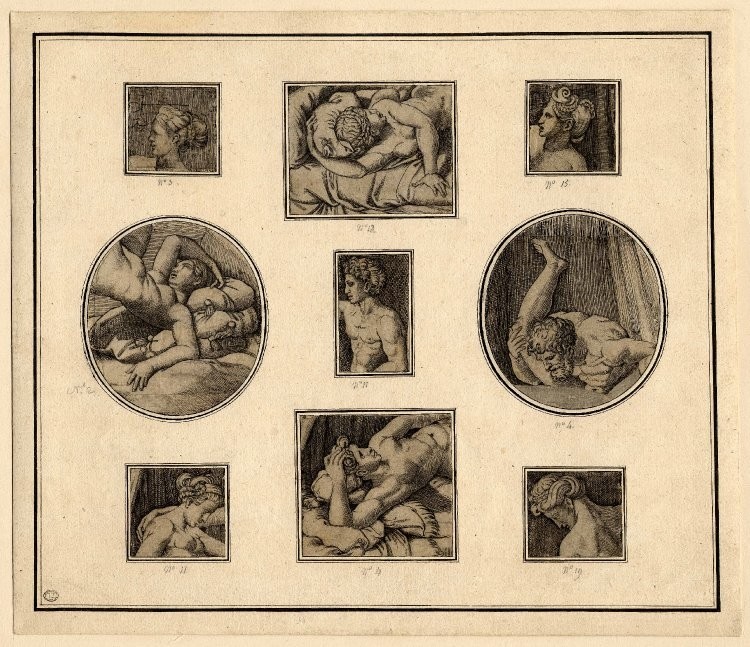 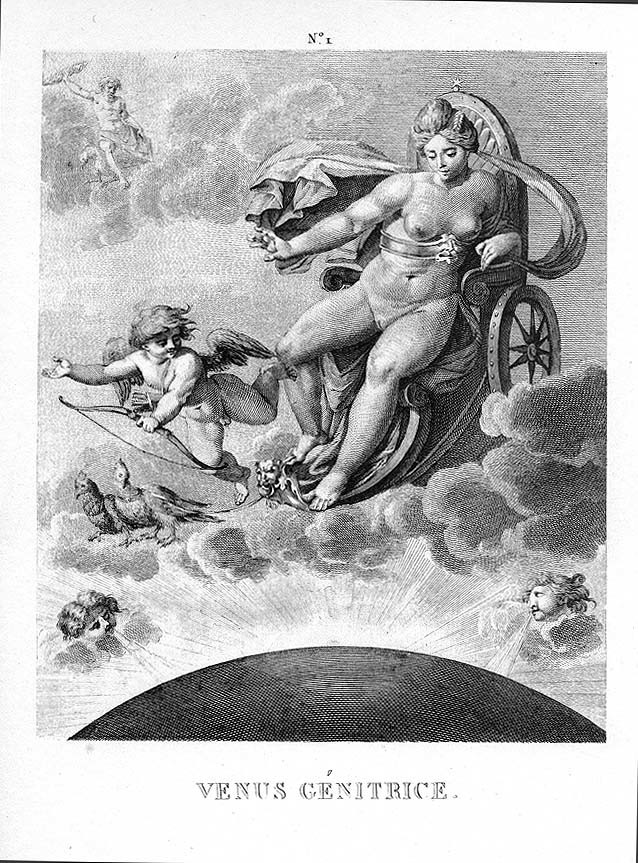 SONNET 1 by Aretino
He: Let’s fuck, my love, let’s fuck,
Since all of us were born only to fuck.
You adore the rod and I adore the hole.
The world would be nothing without this act.

If it were proper to fuck after death,
I’d say let’s fuck ourselves to death,
Then we could fuck Adam and Eve,
Who died dishonorably.

She: Truly, if those truants hadn’t eaten
that treacherous apple in the garden,
Lovers would long ago have quenched their lust.

But let’s stop chatting. Stick your rod in
So that it reaches my heart, and crush the soul
That lives or dies issuing from the rod.

He: Don’t leave out my balls –
Take them inside the hole,
those witnesses of every extreme pleasure. 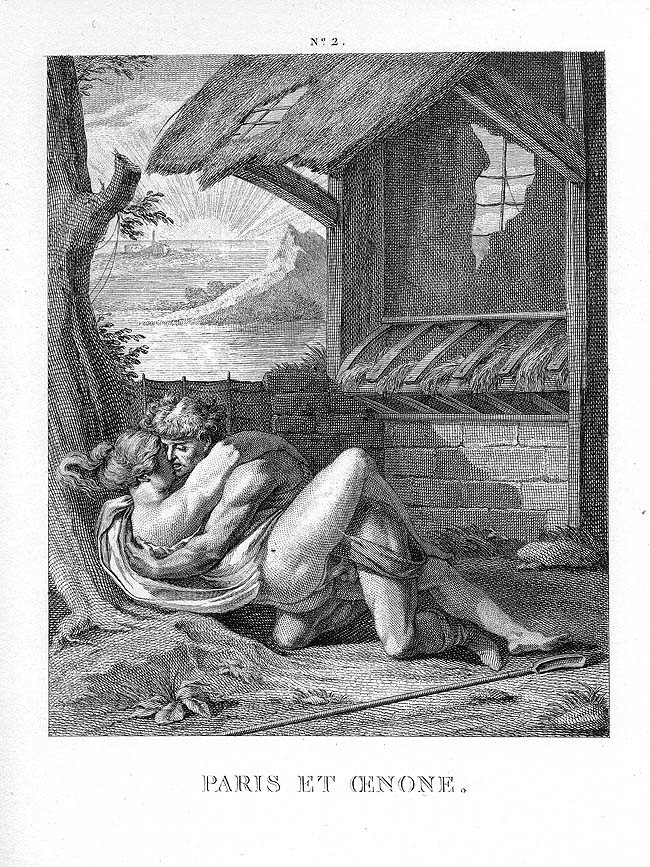 According to Greek mythology, Oenone was the first wife of Paris, whom he abandoned for Helen, the queen of Sparta, after three goddesses Aphrodite, Athena, and Hera had forced him to choose who was the most attractive among them. Every goddess promised him a special reward. Aphrodite said that she would make him capable of seducing the most beautiful woman in the world. Paris couldn’t resist and announced her as the most attractive deity. Then he abducted Helen with the help of Aphrodite and the great Trojan war, at the end of which Greeks set Troy on fire, was begun. In the engraving by Carracci, Paris is just a shepherd idyllically loving his wife, and the shine above Troy is not the fire, but only the morning sun. 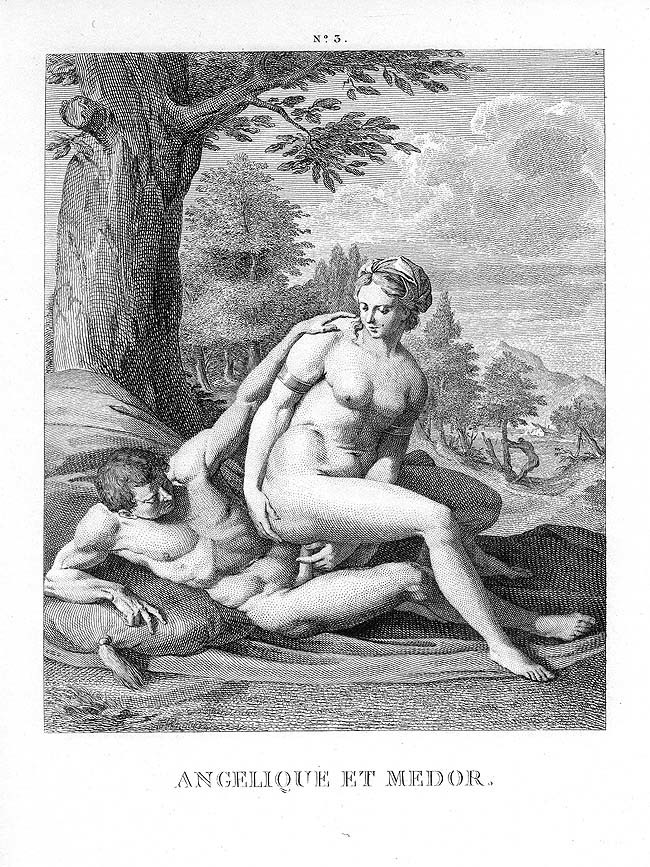 This couple originates from the popular Italian narrative “The Frenzy of Orlando,” 1516 (“Orlando Furioso”) by Ariosto. Angelica was a coldhearted princess living at the court of the king Charlemagne at the time of wars for the Holy Tomb. Annoyed Cupid made her fall in love with the Saracen knight Medoro when she occasionally found him being wounded and nursed him secretly. Lovers had carved their names on a tree trunk, and Orlando, who was hopelessly in love with Angelica, discovered these names afterward and thus became mad (“furioso”).

The Satyr and the Nymph 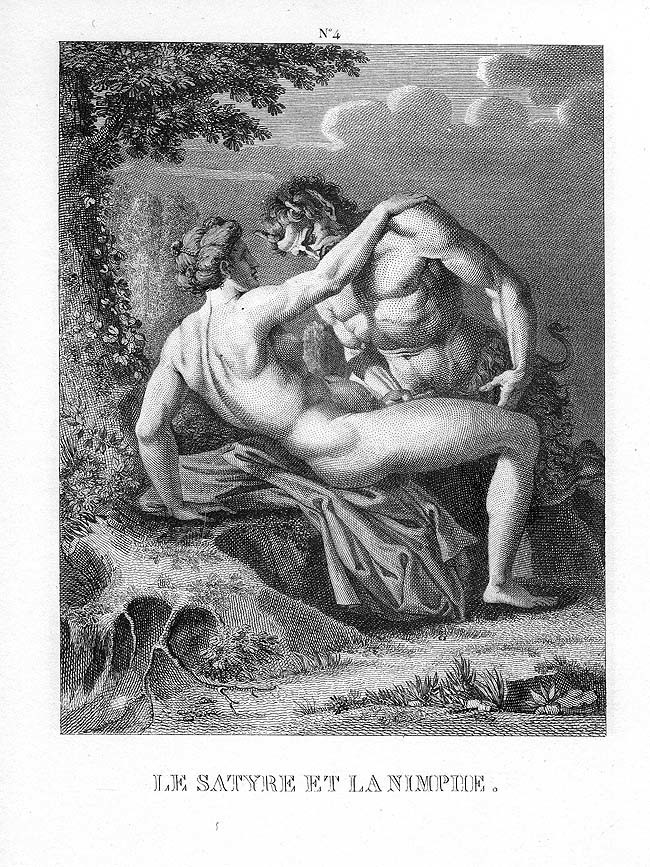 This image shows us a pastoral sex scene without any implied epic story. The nymph is a spirit of nature (probably the spirit of the tree behind her) and the satyr is a lustful goat-like creature from Dionysus’ retinue. Satyrs’ desire was so strong that they often raped sleepy maidens or careless nymphs in the woods.

Julia with an Athlete 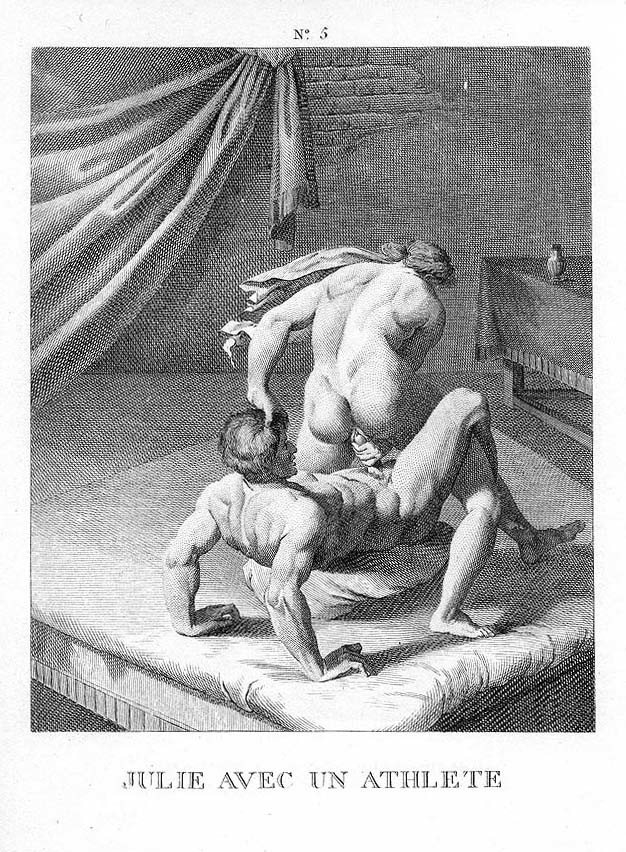 This image contains a reference to the Roman story. Julia the Elder was the lascivious daughter of Augustus Caesar who said once: “There are two wayward daughters that I have to put up with: the Roman commonwealth and Julia.” Being the only child of Augustus, Julia was obliged to provide his father with noble grandsons. She first married at the age of fourteen, but her husband died two years later. Then she married general Agrippa, who wasn’t of noble origin but was trusted by Augustus. Her second husband was 25 years older than her, and 18 years old Julia was seduced by young aristocrat Sempronius Gracchus. 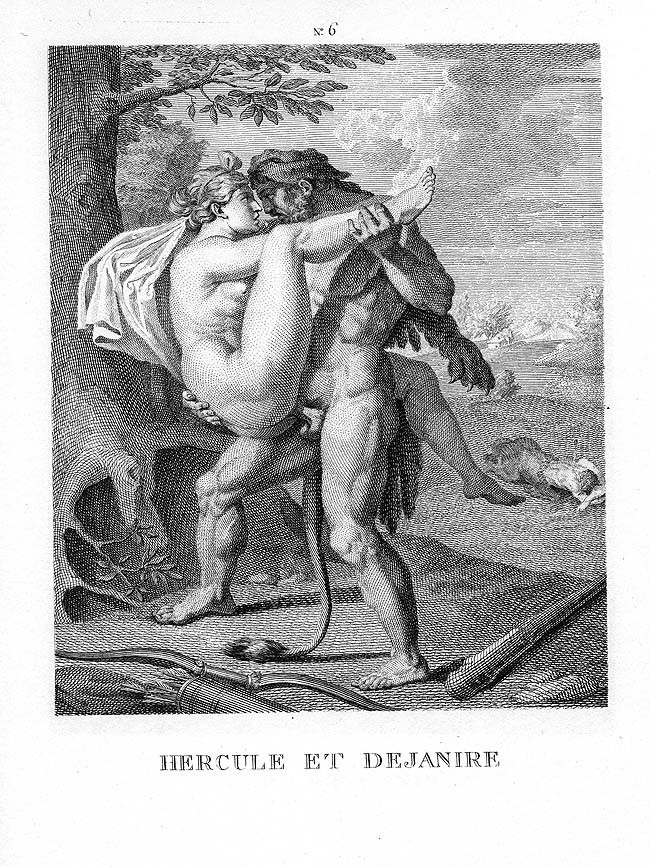 Deianira was a Calydonian princess and a possessive (or naive) spouse of a Greek hero Hercules. Her beautiful name is, in fact, a spoiler for the whole story because it can be translated as “a destroyer of her husband.” As we know from the myths, Hercules covered his arrows with poisonous blood of Lernaean hydra after he had defeated the monster, so every shot became fatal.

When centaur Nessus took an attempt to abduct and rape Deianira, Hercules killed him with his mortal weapon. Agonizing Nessus persuaded Deianira to collect his poisoned blood by telling her that if she covered with this “potion” the clothing of Hercules, he would love her forever. When Deianira suspected Hercules of infidelity, she recalled these instructions and caused Hercules’ cruel death. 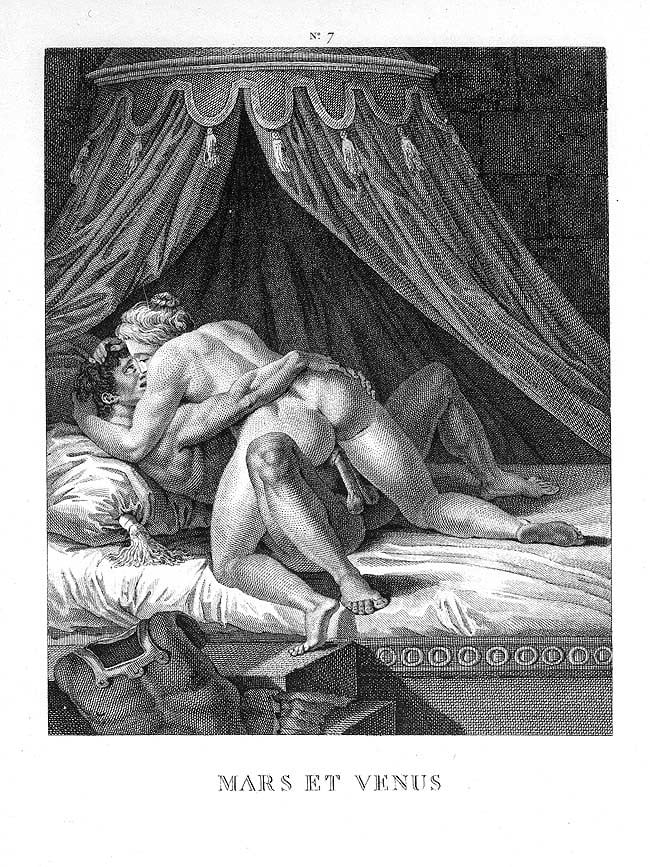 Fig. 8. Missionary (woman on top, though lying not sitting, and with left foot supported by stool).

Venus or Aphrodite was a wife of Hephaestus, the god of metalworking. She didn’t like her ugly and spavined spouse and thus cheated on him with other gods and heroes. In this engraving, she has an affair with the god of war Mars (we can see his cuirass next to the bed). According to the myth, Hephaestus caught them with an invisible metal net and dragged his prey to mount Olympus. Gods persuaded him to set cheaters free in return for an adulterer’s fine from Mars.

The Cult of Priapus 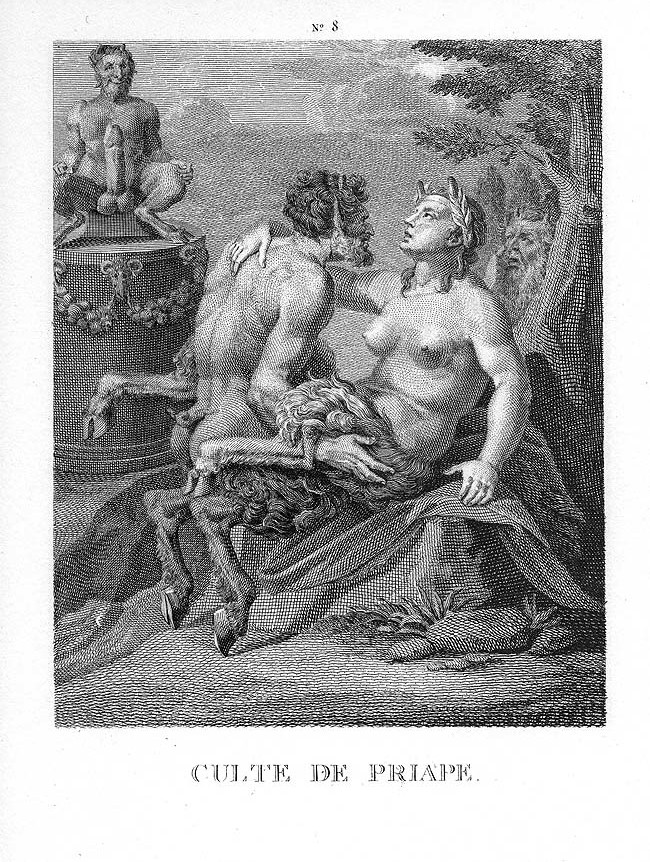 Here we see an encounter of two satyrs and the statue of Priapus with a giant penis in the background. A minor deity Priapus was a son of Dionysus and Aphrodite, and a patron of physical love and fertility.

Jove controls the thunderbolts;
the trident is Neptune’s weapon;
Mars is mighty by the sword;
thine, Minerva, is the spear.
Bacchus fights his battles with a bundle of thyrsi;
the bolt, we are told, is shot by Apollo’s hand.
Hercules’ invincible right arm is equipped with a club;
but a mentule at full stretch makes me appalling. (“Priapea” or “Sportive Epigrams on Priapus”)

This scene is not typical for Greek art and mythology because there are no female satyrs. This series has one more image of coupling satyrs “A Satyr and His Wife” (fig. 10). 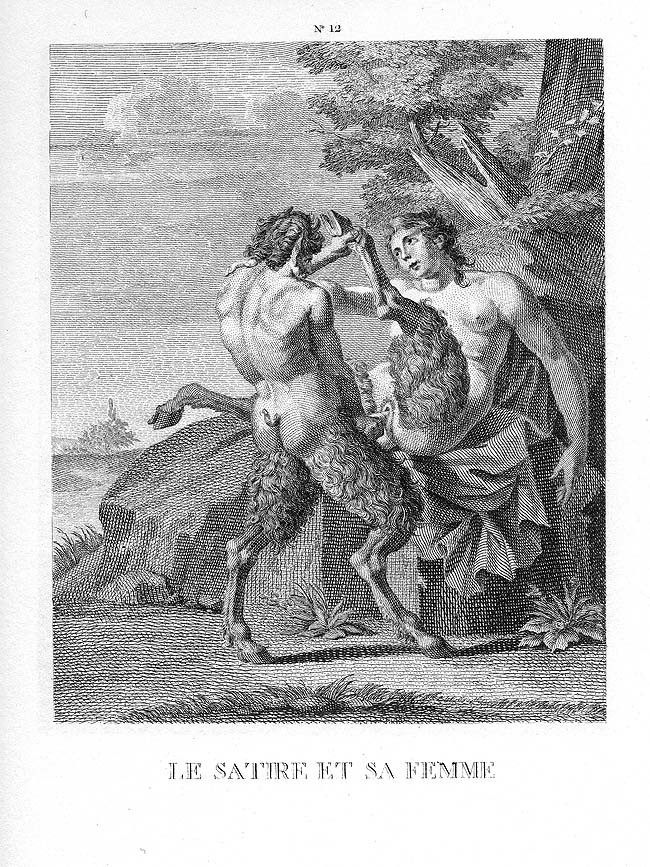 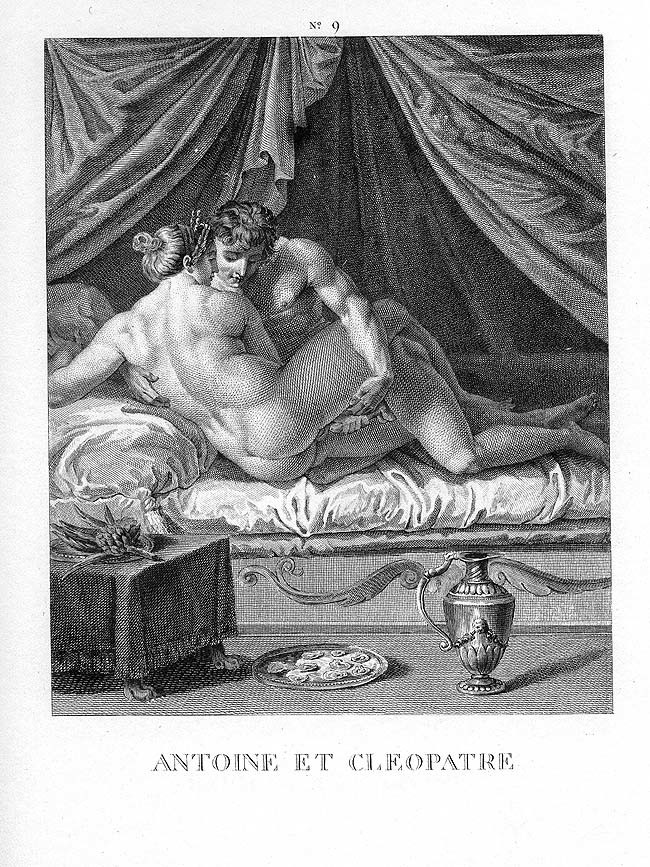 Let’s take a look at another famous couple from Roman history. Mark Antony was a talented Roman general who fell in love with Cleopatra when he was visiting the client kingdom of Egypt (which means that Egypt depended on Rome at that time). Antony was also a member of the Second Triumvirate: he ruled the Roman Empire together with Octavian and Marcus Lepidus. To make relations between triumvirs more stable, Antony married a sister of Octavian. So, when the latter learned about Antony’s affair with Cleopatra, he proclaimed Antony a traitor. After the catastrophe at the Battle of Actium, lovers committed suicide, and Octavian, who was a father of Julia the Elder, became the first Roman emperor.

Let us know what you think about I Modi in the comment box below….!!