Ancient Ways of Lovemaking in “I Modi” by Agostino Carracci, Part II

Let’s continue our journey into the fates of legendary lovers in the engravings by Agostino Carracci! Check part one if you haven’t done this yet!

PLAIN SONG (Pietro Aretino)
I am a glutton for the thing called love,
A bigger glutton than the ones who sit
All day at table, as the full hours flit,
And hold they’re happier than the gods above.

They swill down wine, while I, my turtle-dove,
Choose milk and find I am content with it —
Turn on the spigot! let us draw a bit:
Yes, I’m a very glutton, dear, for love.

And what, in truth, is more divine than — Lust?
To Lust and Love we’ll raise a litany
And do a little genuflection, too;

Since when all’s said, we do but what we must,
Like any abbess in her priory,
For an abbess, dear, is just like me and you. (translated by Samuel Putnam)

Bacchus (the Roman name for Dionysus), who was a god of wine and fertility, and a patron of comedy and scabrous literature, had an unusual origin. He was a son of Zeus and his priestess Semela, however, the encounter of deities and people often produced heroes, not gods: “And to him Semele, daughter of Kadmos, bore an illustrious son, Dionysus bringer of joys, after union in love, mortal though she was, an immortal. But now both are deities.” (Hesiod)
Bacchus wandered across the world and taught people of winemaking. The hatred of Zeus’s wife Hera (Juno) followed him everywhere, so he was captured several times, murdered brutally as an infant, according to some myths, and resurrected by Zeus.

His wife Ariadne was a wise Cretan princess. Before the marriage with Dionysus, she fell in love with a peregrine Theseus, destined to defeat monstrous Minotaur, the inhabitant of the large maze. For Theseus not to get lost in the maze, she gave him a magic clew. The defeater of Minotaur decided to take Ariadne to his fatherland. But being on the way home, he changed his mind and abandoned the desperate princess on Naxos island where she was found by Dionysus. This moment is depicted in Carracci’s engraving. The departing ship in the background belongs to Theseus. The pose of Ariadne with her face hidden indicates her mixed feelings of desperation and pleasure. According to Hesiod, Zeus made the wife of Dionysus immortal after their marriage. 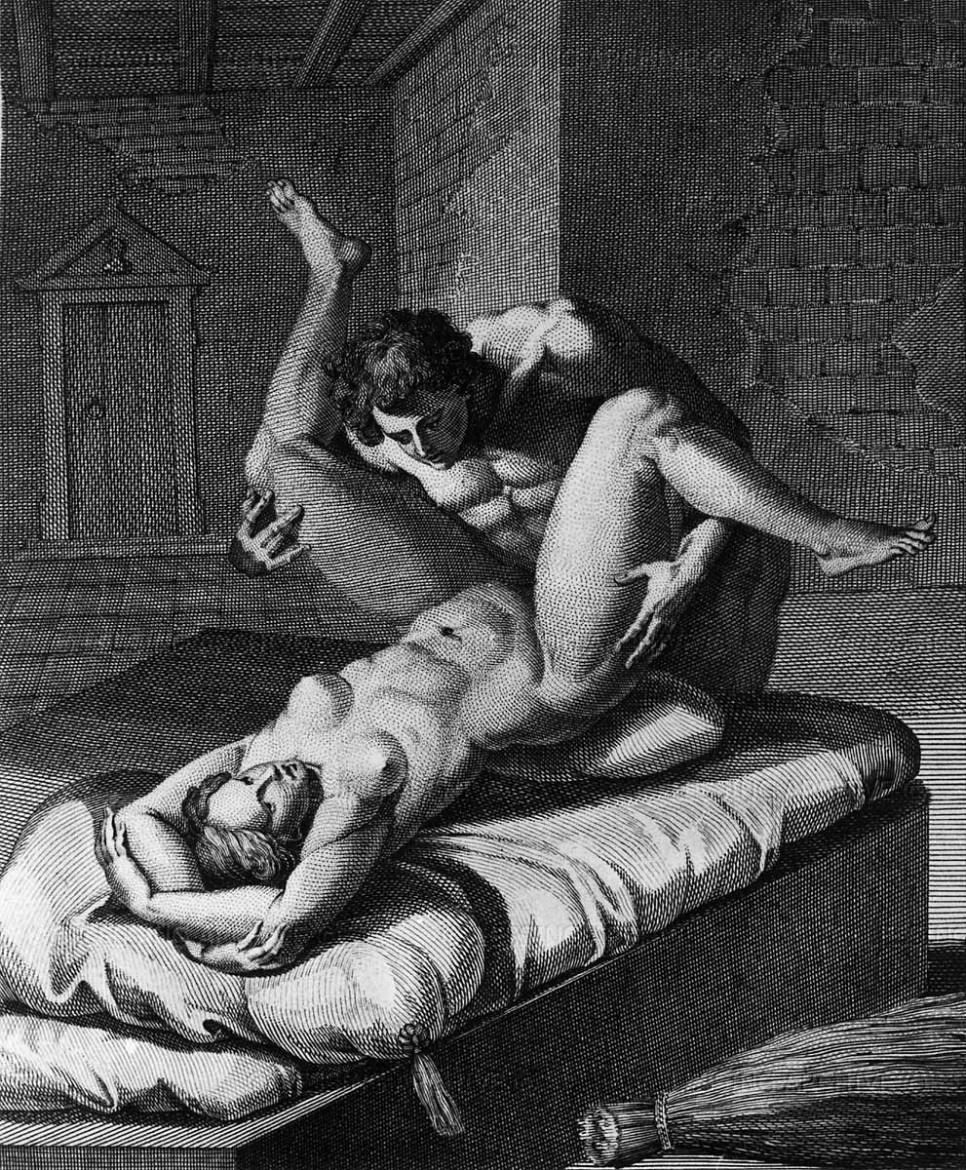 This couple is remarkable enough already because a male partner of Chryseis doesn’t exist in any epic or romantic story, while Chryseis is a noticeable character of “Iliad,” a concubine and slave of Agamemnon who was a king of Mycenae. According to the story, Chryseis was a Trojan woman, a daughter of Apollo’s priest Chryses. Greek hero Achilles had captured her and then gave her as a gift to Agamemnon. The latter felt passion for Chryseis and even wanted to divorce his wife Clytemnestra, thus ignoring Chryses who was asking Agamemnon to set his daughter free. Finally, the priest begged Apollo to punish Greeks and Apollo plagued their leaguer. After many deaths, Agamemnon learned from the diviner Calchas what was the reason for this misfortune and sent Chryseis back to her father. 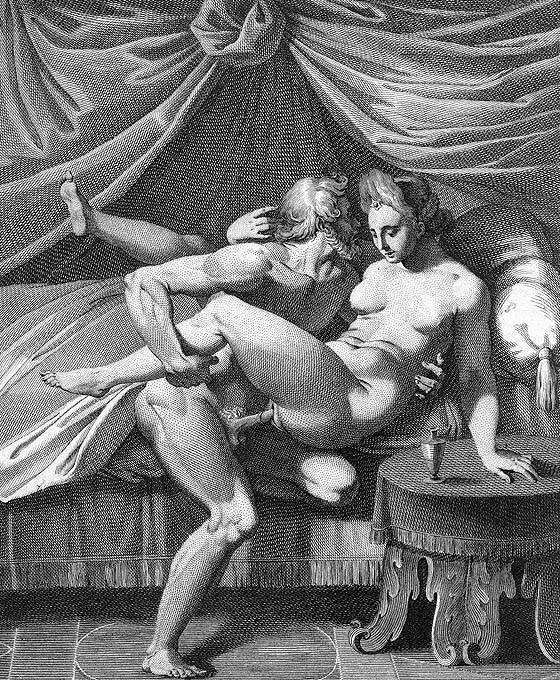 An amateur of Greek mythology probably will admit that the scene we come across is quite rare. Zeus is known for his numerous adulteries, which can be seen in thousands of great paintings and sculptures. We watch his encounters with Leda, Danae, Europa, Alcmene, Callisto, Leto, Nemesis, Semela, etc., while his wife Hera (Juno) spends her time in solitude. This idyllic engraving shows her not making up revenge plans, but only making love with a lustful spouse as if he was always loyal to her.

Messalina in the Booth of ‘Lycisca’ 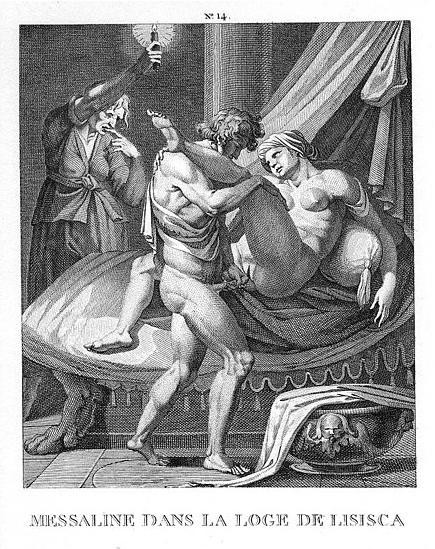 Messalina, whose figure became a symbol of lust, was the third wife of the Roman Emperor Claudius. The scene depicted in Carracci’s etching was originally described in the sixth satire by Juvenal:

“As soon as his wife perceived that her husband was asleep, this august harlot was shameless enough to prefer a common mat to the imperial couch. Assuming a night-cowl, and attended by a single maid, she issued forth; then, having concealed her raven locks under a light-colored peruque, she took her place in a brothel reeking with long-used coverlets. Entering an empty cell reserved for herself, she there took her stand, under the feigned name of Lycisca, her nipples bare and gilded, and exposed to view the womb that bore thee, O nobly-born Britannicus! Here she graciously received all comers, asking from each his fee; and when at length the keeper dismissed the rest, she remained to the very last before closing her cell, and with passion still raging hot within her went sorrowfully away. Then exhausted but unsatisfied, with soiled cheeks, and begrimed with the smoke of lamps, she took back to the imperial pillow all the odors of the stews” (Satire VI). 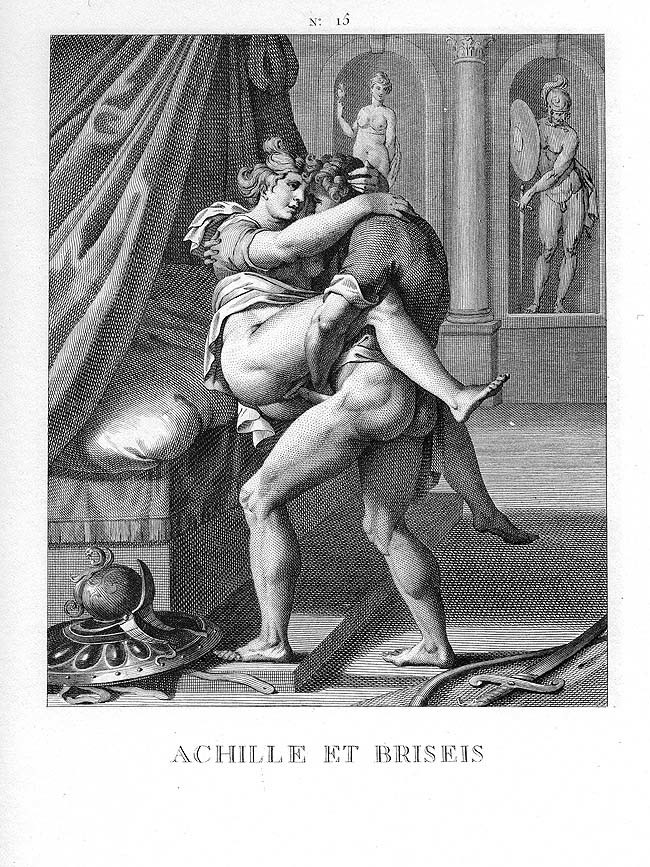 This engraving is another reference to “Iliad.” Briseis was a Trojan woman captured by Achilles who made her his concubine. Even though Greeks destroyed whole Briseis’s family, she sincerely loved Achilles. When Agamemnon had given Chryseis away, he took Briseis from Achilles by force as a compensation. Enraged Achilles refused to fight with Trojans and sent instead of himself his friend Patroclus. After Patroclus had perished in a battle, Achilles returned to fighting to wreak vengeance upon murderers, so Agamemnon gave Briseis back to him. 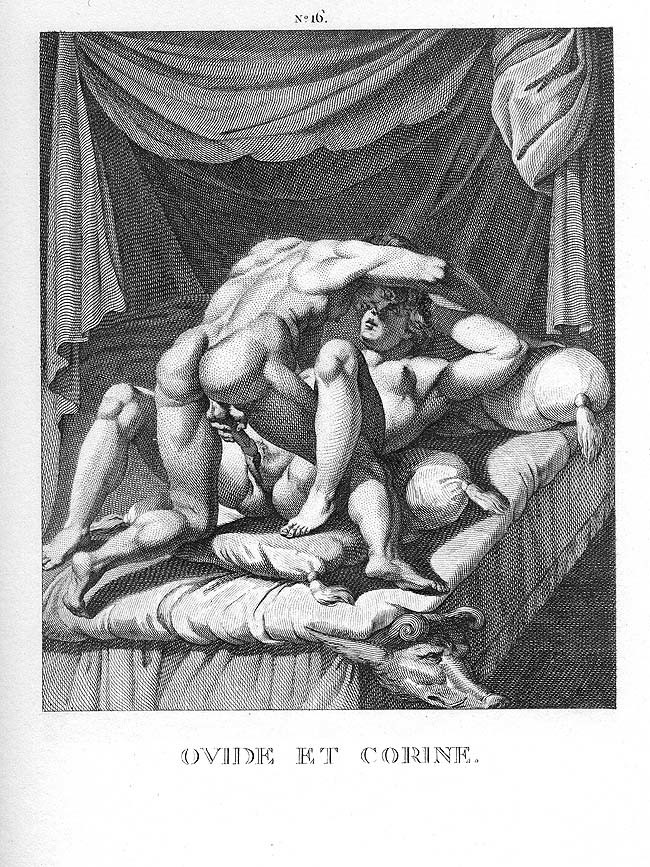 This pair is the most amusing to watch if we take into account that Corinna is a fictional addressee of Ovid’s love elegies called “The Amores.” Ovid was a Roman poet, author of the monumental epic writings like “Metamorphoses” and “Aeneid.” We will discuss the tragic love story of the main character of “Aeneid” under the next etching.

CORINNA IN AN AFTERNOON (Book I, Elegy V)
It was hot, and the noon hour had gone by:
I was relaxed, limbs spread in the midst of the bed.
One half of the window was open, the other closed:
the light was just as it often is in the woods,
it glimmered like Phoebus dying at twilight,
or when night goes, but day has still not risen.
Such a light as is offered to modest girls,
whose timid shyness hopes for a refuge.
Behold Corinna comes, hidden by her loose slip,
scattered hair covering her white throat –
like the famous Semiramis going to her bed,
one might say, or Lais loved by many men.
I pulled her slip away – not harming its thinness much;
yet she still struggled to be covered by that slip.
While she would struggle so, it was as if she could not win,
yielding, she was effortlessly conquered.
When she stood before my eyes, the clothing set aside,
there was never a flaw in all her body.
What shoulders, what arms, I saw and touched!
Breasts formed as if they were made for pressing!
How flat the belly beneath the slender waist!
What flanks, what form! What young thighs!
Why recall each aspect? I saw nothing lacking praise
and I hugged her naked body against mine.
Who doesn’t know the story? Weary we both rested.
May such afternoons often come for me! 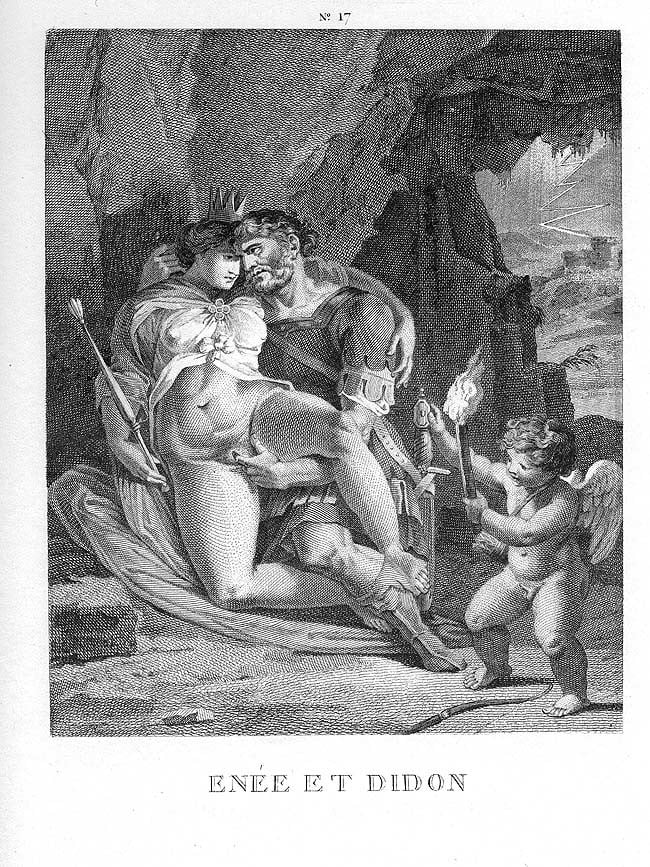 Aeneas from Troy, a son of Venus, also was a mythologic ancestor of Rome’s founders. He led survived Trojans to Italy. During his long way, Aeneas with his ships was caught in a storm and landed at the coast of Africa. To save her son, Venus made Carthaginian queen Dido fall in love with Aeneas. Their first encounter, which was a result of a plot of Juno and Venus, took place in a cave where they hid from the rain.

“Meantime, the gath’ring clouds obscure the skies:
From pole to pole the forky lightning flies;
The rattling thunders roll; and Juno pours
A wintry deluge down, and sounding show’rs.
The company, dispers’d, to converts ride,
And seek the homely cots or mountain’s hollow side.
The rapid rains, descending from the hills,
To rolling torrents raise the creeping rills.
The queen and prince, as love or fortune guides,
One common cavern in her bosom hides.
Then first the trembling earth the signal gave,
And flashing fires enlighten all the cave;
Hell from below, and Juno from above,
And howling nymphs were conscious of their love.
From this ill-omen’d hour in time arose
Debate and death, and all succeeding woes.”

Aeneas started ruling Carthage land together with Dido, but Jupiter wanted him to go to Italy, so he had to abandon the queen. Mournful Dido burnt herself seeing departing ships of Aeneas. This legend was a mythological explanation of the Carthaginian war. 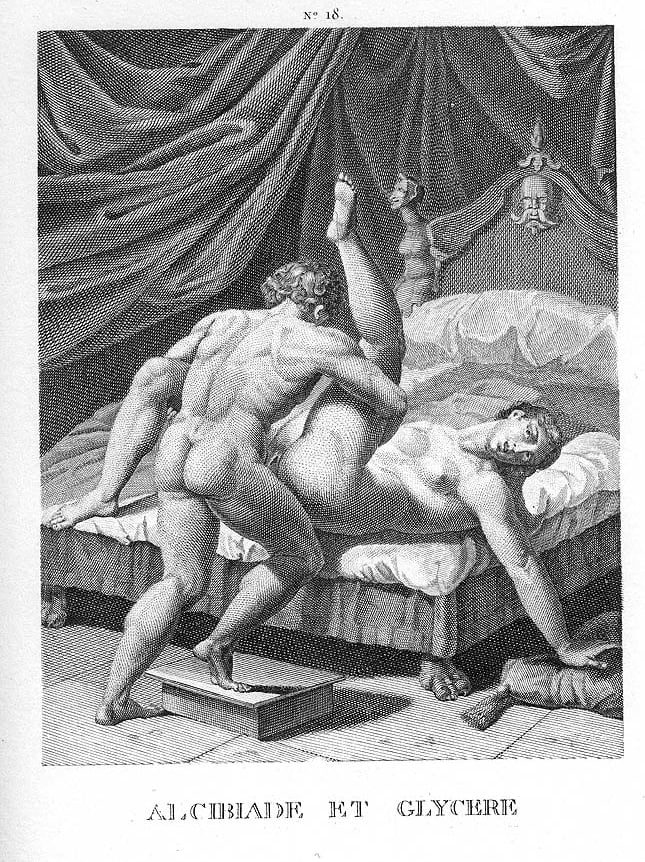 Fig. 8. Missionary (man on top and standing, woman lying and legs up)

This couple never existed in reality nor in fiction, because great Greek orator and general Alcibiades lived 100 years earlier than hetaira Glycera, however, this could be a nice match. Being a manipulative politician, Alcibiades took part in a war between Athens and Sparta and fought on both sides in turn. According to Alcyphron, Glycera was a lover of a playwriter Menander. State of hetaira meant that Glycera was a free well-educated artistic woman who, like a geisha, provided a small coterie of men with her companionship. When philosopher Stilpon once publicly accused her of seducing young men, she answered him: “You and I are accused of the same thing, O Stilpon; for they say that you corrupt all who come to you, by teaching them profitless and amorous sophistries; and they accuse me of the same thing: for if people waste their time, and are treated ill, it makes no difference whether they are living with a philosopher or with a harlot.”

This legendary fictional character whose name means “all-gifted” is described in myths as the first woman. Zeus created her to punish people for stealing the fire from gods. In other words, she was a counterbalance of the gift that people received without the gods’ will, while titan Prometheus, who stole the fire by himself, received the punishment in a full sense of this word. Pandora was gifted with beauty, great rhetoric skills, cunning, curiosity, and sent to the Earth to marry Prometheus’s brother Epimetheus (“the one who thinks after” and the one wearing a crown in the engraving). Seduced Epimetheus possessed a box (or a jar as in the etching) which he told Pandora not to open, but she couldn’t resist her curiosity and let out all diseases and misfortunes that were locked in a vessel. This way humankind faced problems that we still can’t solve. The intercourse of Epimetheus and Pandora in the engraving is interrupted by an aroused satyr and a boy with a candle, so this crowned man, we guess, is as much unlucky in his attempt of intimacy as the humanity in its’ urge to prosper.

The survived parts of the original edition inspired some other artists, e. g. Count de Waldek, to create their own vision of this theme. Waldek made his reproduction in 1850. Some of these images you can see below complemented with the third sonnet by Aretino.

They tell a sorry tale of old man Mars —
You know the chap, the blunderer of battle —
And lady Venus, comeliest of cattle,
And a certain night they spent beneath the stars.

But there are gods, it seems, have better spars,
Like Hercules, of whom the poets prattle:
Hand me my club, and stop this tittle-tattle;
Leave goddesses to those old Grecians’ jars!

Though you’re a goddess in my sight, dear one;
A marble goddess, too, in certain parts.
Bring music, then! We will be gay tonight.

God give me this one feast; when it is done,
Death, I am yours! Meanwhile, young Cupid’s darts
Flash home in an unmythologic light. (Samuel Putnam) 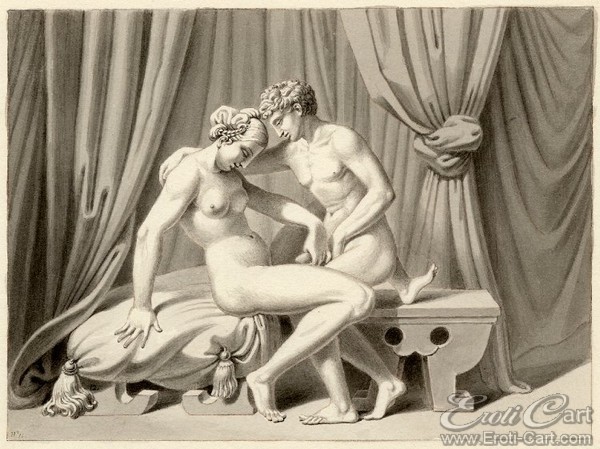 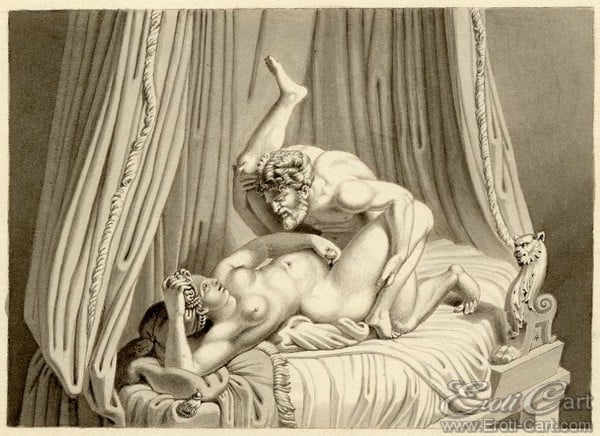 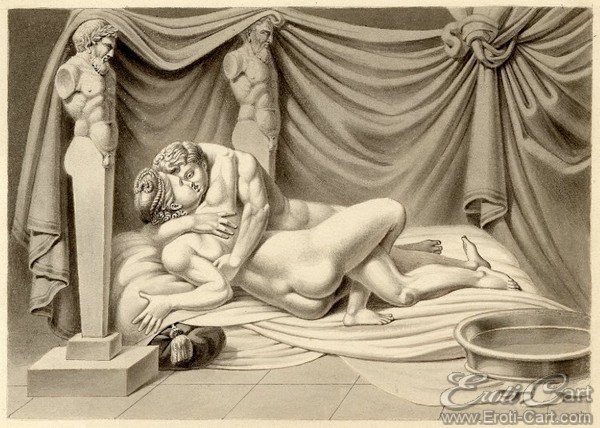 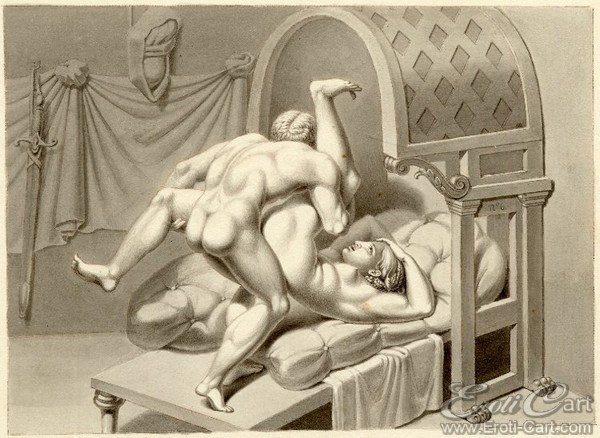 Let us know what you think about I Modi in the comment box below….!!