Almost anyone has something to regret. When it comes to talented artists, their regrets often make them destroy what they've created. We know many cases when society banned works of art, but there are also a lot of situations when creators themselves become the source of censorship, changing their minds about certain things or being apprehensive about their reputation. The cases when provocative pictures don't affect the career of the one who's produced them seem intriguing in the fearful and repressive climate of philistine communities. Matthew William Peters (1742-1814) was an English portrait and genre painter known for his frivolous depictions of courtesans. Sensual portraits didn't prevent him from becoming a clergyman later and ironically turned out to be his most famous works. 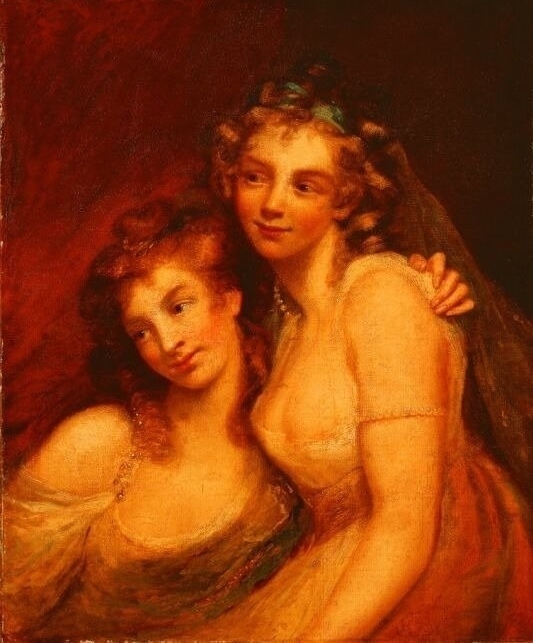 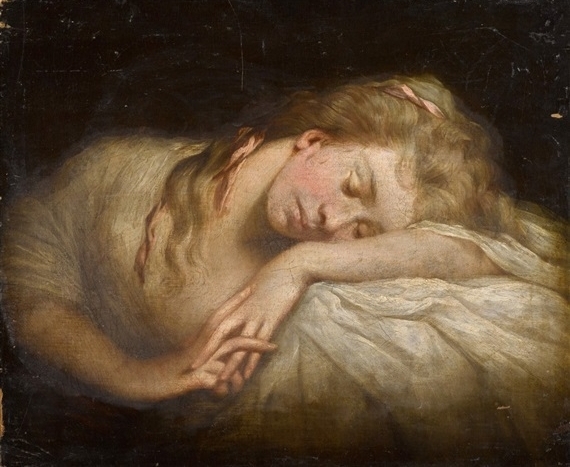 The Influence of Society

Peters was born in Freshwater, Isle of Wight, in the family of a civil engineer. When Peters was young, they moved from England to Dublin, as Peters the older was invited to improve loughs and rivers for navigation. The artist received his education in Dublin with the founder of the local drawing school Robert West as his mentor. During his studies, Peters proved himself to be talented enough for the Dublin Society to send him to London, where he was trained by the English portrait painter Thomas Hudson and won a premium from the Society of Arts. The Dublin Society also sponsored his travel to Italy, where he studied art from 1761 to 1765. Staying in Italy, Peters became a member of the Accademia del Disegno in Florence. After his return to England, the artist exhibited works at the Society of Artists and the Royal Academy. In 1777, Peters was elected an academician. 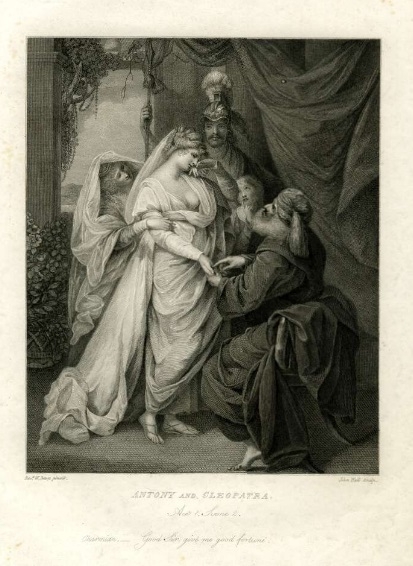 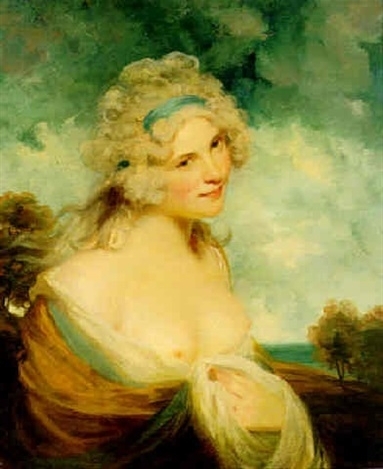 Fig. 4. Portrait of a lady as a bacchante, attrib. to Peters (artnet.com) 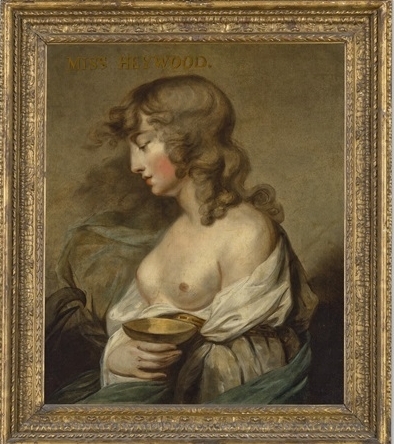 Already in the 1760s, the artist was made a freemason, which meant that his talent was valued by society. As the grand portrait painter of the Freemasons, he exposed portraits of the Duke of Manchester and Lord Petre as Grand Master at the Royal Academy exhibition in 1785. The artist also served as chaplain of the Royal Academy for four years, from 1784 to 1788, and this position gradually took over his academic ambitions. As Peters said himself, he resigned from the Royal Academy to `relinquish his art as a profession and take up a clerical career.' In the most successful years of his academic and clerical occupations, Peters was awarded two livings: Scalford, (Leicestershire), and Knipton. In 1795, when he became prebendary of Lincoln Cathedral, he also obtained a living at Eaton. Being a clergyman, Peters focused mainly on religious works. He created a ten-by-five foot Annunciation for Lincoln Cathedral and The Resurrection of a Pious Family. 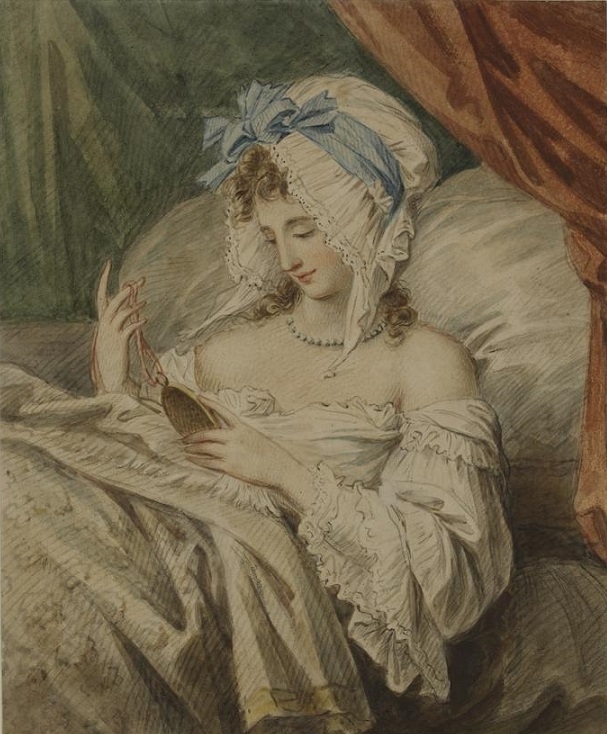 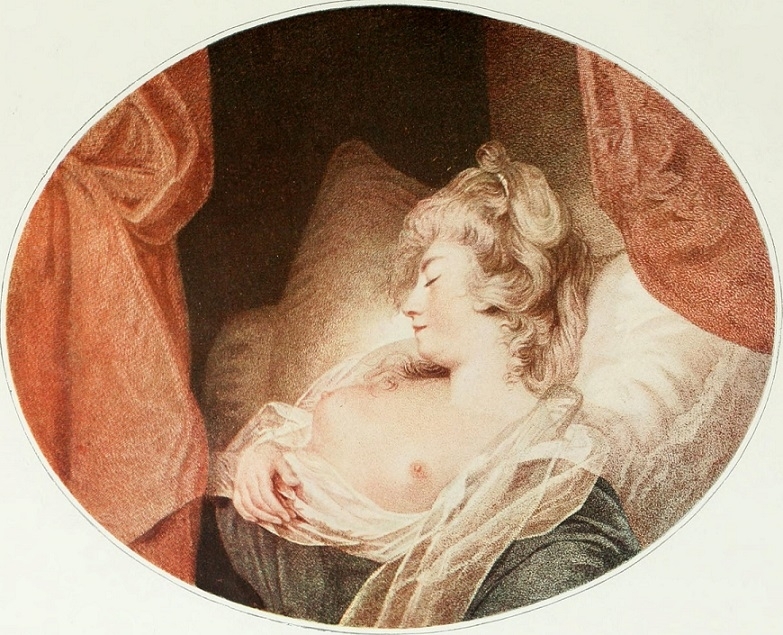 Sylvia, Lydia and Others

Comparing portraits of courtesans Sylvia, Lydia, Belinda, to other depictions of females with bare breasts by Peters, we can define their specificity. The curious thing about these paintings is that they are actually closer to pornography than erotic art. In fact, the crucial detail is not their breasts that may seem to be the main source of 'vulgarity' but their provocative smiles and the liberated look they give to the viewer. Examining these images, we can conclude that the acknowledged English painter somehow managed to produce portraits comparable to the images of girls on the backs of decks for adults (which doesn't affect the high level of performance, though). 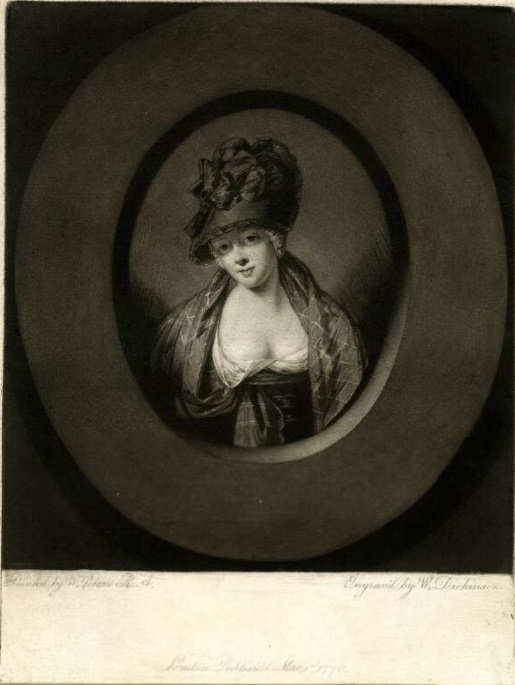 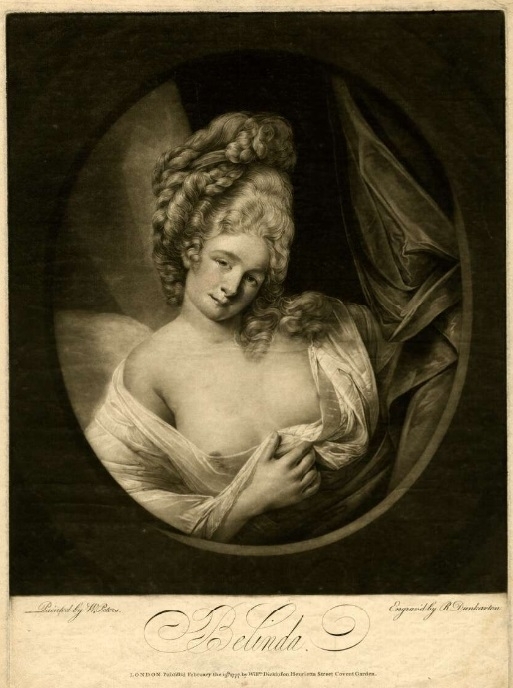 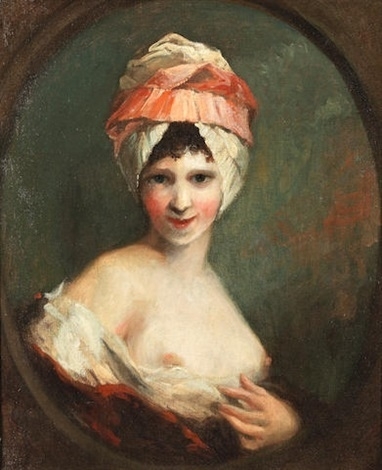 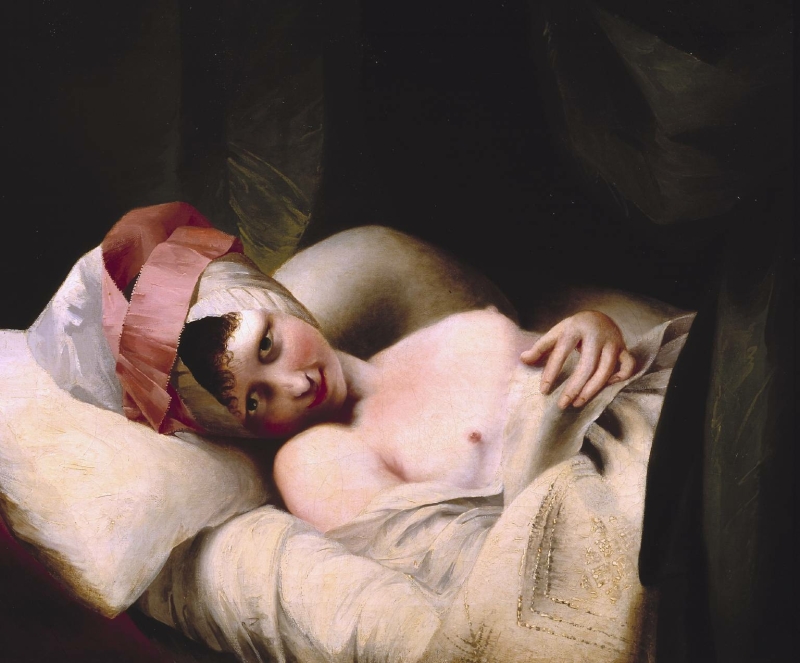 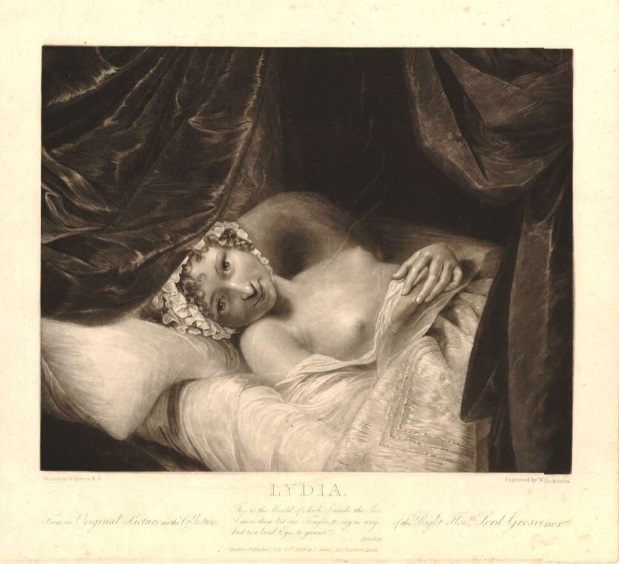 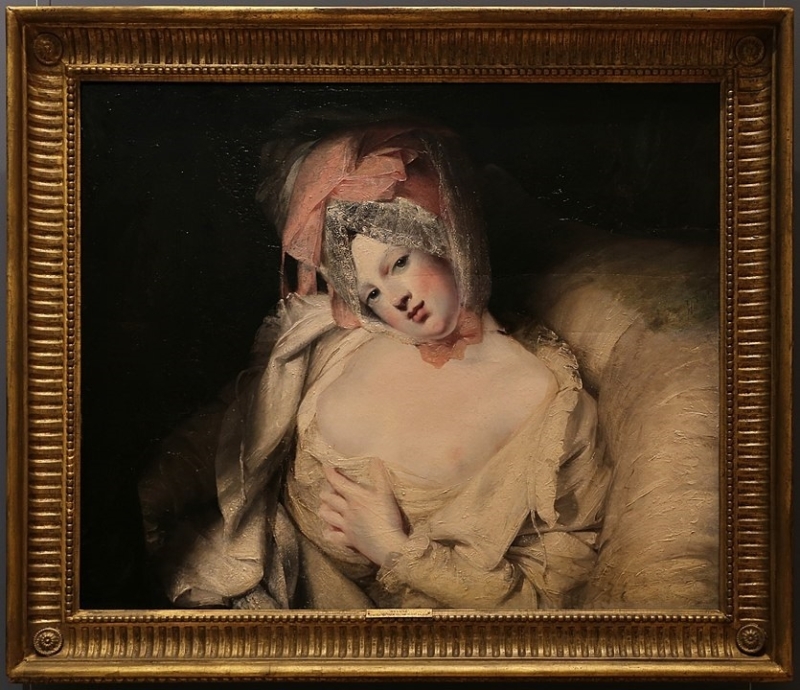 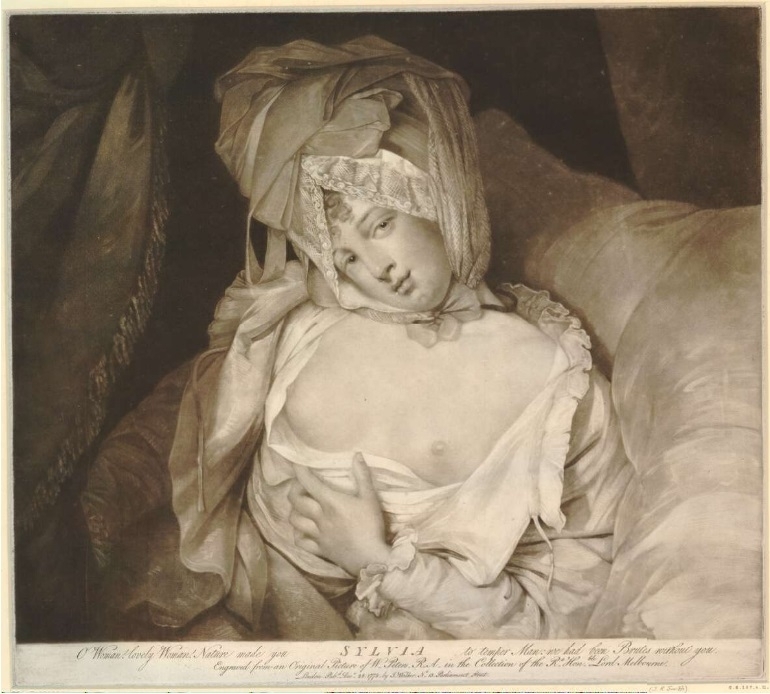 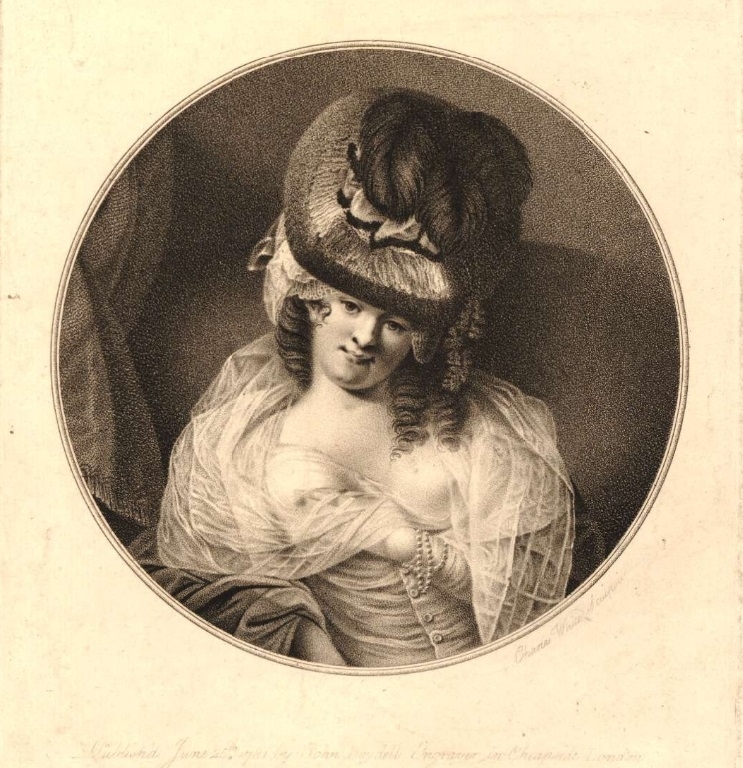 Fig. 15. Print made after Peters (britishmuseum.org)