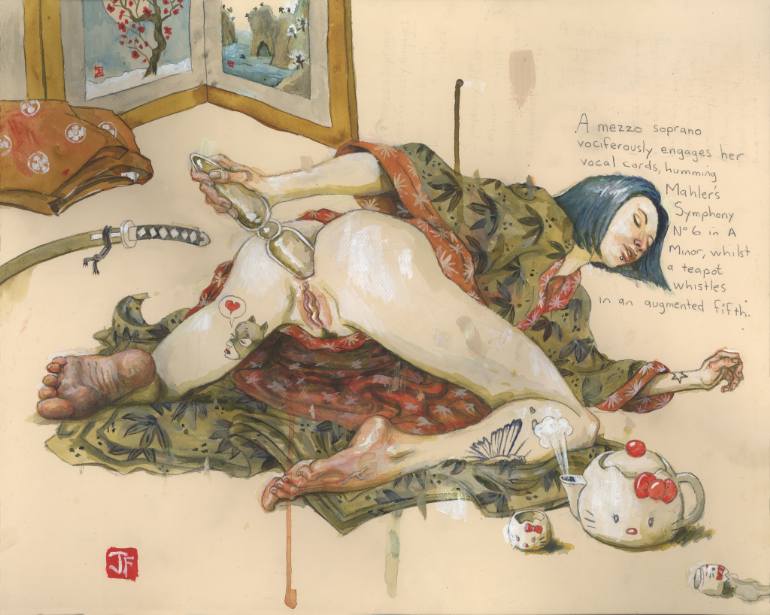 Just received scans of the most recent work by Jeff Faerber. This new pieces all have his usual features (such as the mixture of contemporary Western and ancient Japanese objects) but he also adds a new one in the form of additional text (title of the painting) in the image.

Jeff Faerber: “Yes, I noticed that there is a lo of text on the original prints, so I assumed they told some form of story telling (I don’t read Japanese). I liked the visual of several sentences of text, so I started to give my pieces longer titles and use the title as a visual device. Also, I really liked the titles I came up with, but realized that no one pays attention to the title. I know I never do. So if I added the title to the piece at least it would visually be tied to the painting.”

Striking is that many of the protagonists in these new paintings are multi-tasking using modern devices (often iPhones) and a lot of them seem to be anally fixated and prefer leg tattoos. The couple in the fifth piece is even recording themselves on a webcam. In short, the artist gives us an accurate (and for some confronting) picture of today.

Scroll down and judge yourself…

‘Having successfully navigated the Byzantine network of social queues, a couple find solace whilst bonding as Beats headphones deliver a crescendo of syncopated rhythm‘ (2017)

‘Hearts twitter, spring blossoms willow in the wind, as the online penpals honeyslut33 and dirkthedestroyer666  rendezvous for the first time IRL‘ (2017)

‘Passionately engaging with a lust for capitalistic gains, a maiden and lad embrace commodified web-cammed coitus‘ (2017)

‘One of our two protagonists inadvertently transmits their ardent expressions, both sentimental and prurient, to familial relations via a sex dialed refurbished LG Nexus 5 D820‘ (2017)

‘A mezzo soprano vociferously engages her vocal cords, humming Mahler’s Symphony No. 6 in A minor, whilst a teapot whistles in an augmented fifth‘ (2017)

Click HERE for more Modern shunga art (including a video) by Jeff Faerber ! 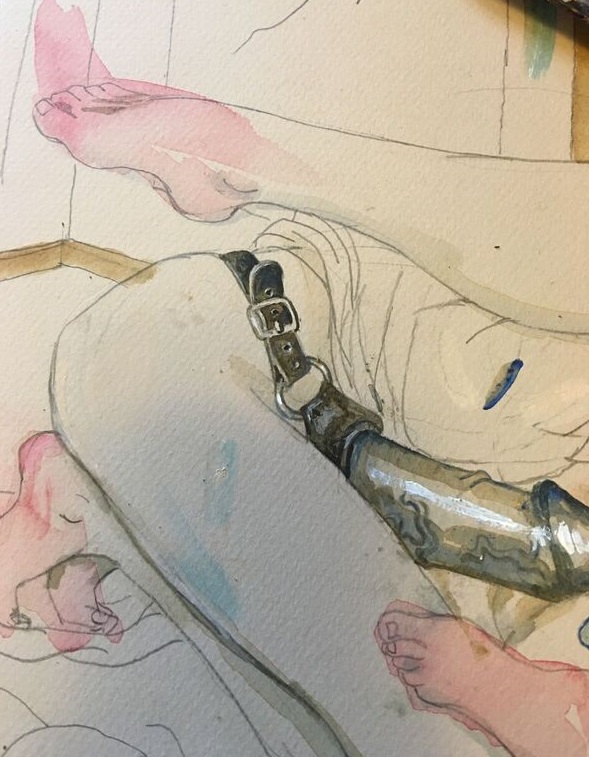 Thanks a lot Stacey!