Keishū was born in Edo (nowadays Tokyo) in 1861. The second son of a feudal underling of the Kishū daimyo. He had no formal art training, but one day boldly walked into the studio of the great Tsukioka Yoshitoshi (1839-1892). The latter was impressed and kept him as a pupil. Keishū specialized in kuchi-e*, and worked as an illustrator within that genre in the 1890s.

To keep himself alive, he also worked as a porcelain painter before he started to design woodblock prints. Although Kuchi-e were popular and produced on a large scale towards the end of the 19th century, it offered a meager living. When his son expressed his ambitions to become a painter too, Keishū replied, “If you are able to live on air and water, you may become an artist.”

Fig.2. Takeuchi Keishu is the first one depicted on the back row from the left (c.1887 – Photo source: shisly.cocolog-nifty.com)

Later in Keishū’s career, partly because he was a member of a literary coterie called Kenyūsha (Friends of the Inkstone), in went better and he always had enough work. He also produced some woodblock triptych designs in the senso-e (war) genre depicting the Russo-Japanese war (1904-05) but these are rarely found.

In his later years he devoted himself to making and collecting dolls. In 1937 he was honored by the mother of Emperor Shōwa who requested that he paint a picture of court dolls for her.

Fig.3. ‘Couple in passionate pose‘ from the series ‘Yakumo no chigiri (Pledge of Yakumo)‘ by Tomioka Eisen

Takeuchi Keishū’s earlier mentioned shunga masterpiece is entitled ‘Leaves of Cherry Blossom (Hazakura)‘ (c.1897). It is the third and last in a series of three deluxe albums issued by the publishing house Hakubunkan. They were produced in response to the success of Tomioka Eisen’s Pledge of Yakumo (Fig.3.) issued in 1896 by the rival publishing house Shun’yōdō.

Ohashi Otawa, the head of Hakubunkan commissioned Keishū to produce an album of equal quality. In format and design it is very similar to Pledge of Yakumo (Fig.3.) The printing effects are always of the highest quality. Figure 4 exhibits elegantly gradated shading (bokashi) on the woman’s sleeve, elaborate silver highlights, burnishing on the black of both protagonist’s hair producing a sheen, gauffrage on the collars and sash, and shell-white (gofun) applied to indicate the fluid dripping from the woman’s private parts.

But enough talk, get ready for some refined sensuality…

Fig.8. ‘A male embraces his lover’s lower legs while penetrating her‘

Fig.11. ‘A married intimate couple in the “tantra pose” while kissing‘

Fig.12. ‘Unusual pose with the woman sitting on the lap of her lover while he lifts her with his arms underneath the back of her knee and suckling one of her breasts‘

Fig.15. ‘An intimate couple is wary during their secret love-making. Both wear a scarf around their heads while they look anxiously around them‘

Fig.16. ‘A less explicit image with the private parts hidden behind the screen. The female holds a bundle of tissues in her mouth while she is mounted from the rear‘

Click HERE and compare this set with another masterpiece by a famous contemporary of Takeuchi Keishu….!!!

*Kuchi-e are frontispieces of books, especially woodblock printed frontispieces for Japanese romance novels and literary magazines published from the 1890s to the 1910s.

Who is your favorite Meiji artist? 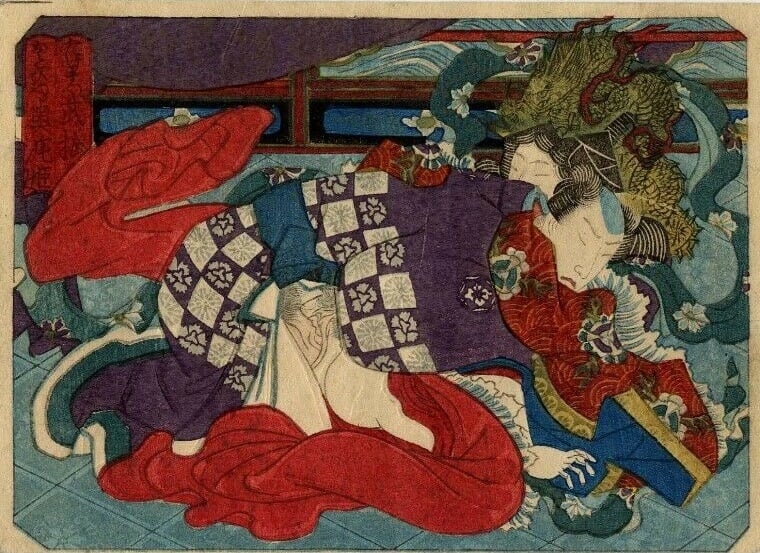 Thanks Darya, I totally agree. According to Rosina Buckland this is the most memorable design from the set, capturing the moment of a love-suicide with the lovers clasped in a final embrace as they throw themselves from a bridge. Their robes billowing out and their love letters fluttering around them. Kunisada also produced two designs on this story. One design of the bridge scene and one depicting them when they are http://www.akantiek.com/shunga/Utagawa-Kunisada.Naked-Woman.boat-scene.Kikugawa-Eizan.p1531.jpg" rel="nofollow">found in the water...!

Thank you for the link. The contrast between two pieces is remarkable. While Keishu depicted this tragedy with a romantic overtone and made it esthetically perfect, Kunisada showed us a mundane side of what happened, like an afterword, where the life is going on in it's simple earth-bound form.

Beautifully phrased Darya! I've got nothing else to add!

Artists repeat some poses in shunga very often, but this way of embracing the legs as in Fig. 8 I've noticed http://www.akantiek.eu/shunga/p1125.jpg" rel="nofollow">only here. Probably Keishu was inspired by this design.

Is possible, but there are more. Such as the one by the Osaka artist Harukawa Goshichi (b.1776).. I'll see if I have a picture of it somewhere..