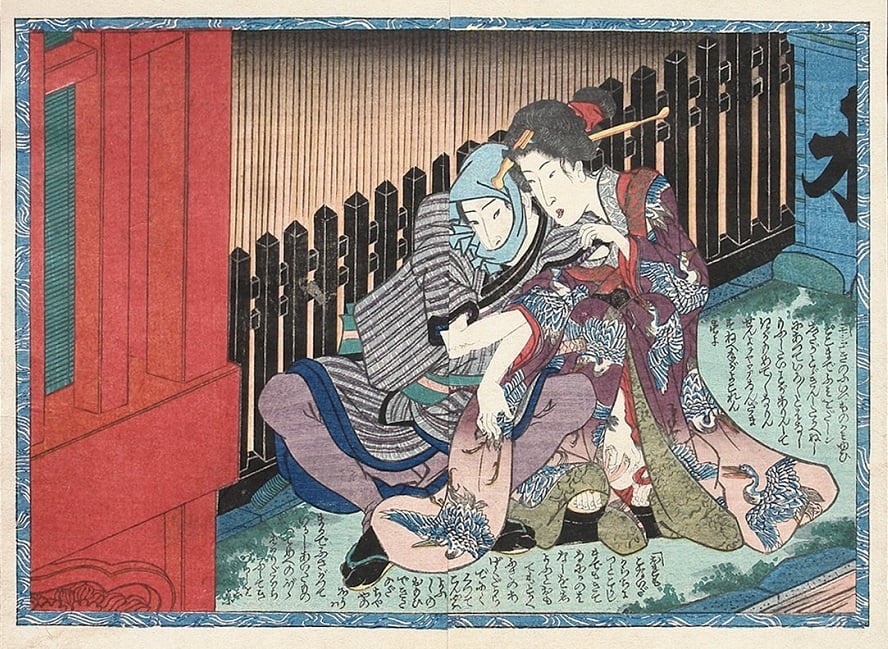 Yosaburo and Otomi, a Famous and Tragic Love Story

In Kunisada‘s design (Fig.1), the young man on the left is Yosaburo, a petty criminal, who had once dared to have an affair with Otomi (on the right), a gangster’s mistress. When the gangster got wind of the affair, Otomi vanished and was thought to have drowned herself. She survived as she was rescued by a stranger, who later turned out to be her brother.

Because of his affair Yosaburo’s face was disfigured by the ruthless gangster, Genzaemon. The scarf that partly covers his face is to hide his scars.

Fig.1. ‘Secret intimate encounter between Yosaburo and Otomi‘ (c.1855) from the series ‘Nezamedoko ikuyo no mutsugoto‘ by Utagawa Kunisada (1786-1865)

This lovely Kunisada design depicts a covert meeting between the two lovers on a streetcorner. Otomi’s lavishly decorated kimono portrays flying herons. The composition is striking with the diagonal lines of the black railing against the straight lines of the wall behind it.

Fig.2. ‘The Story of Otomi and Yosaburo (Otomi Yosaburo no hanashi)‘ (1885) from the series ‘New Selection of Eastern Colour Pictures (Shinsen azuma nishiki-e)‘ by Tsukioka Yoshitoshi

This famous print (Fig.2.), which was one of Yoshitoshi’s personal favorites, features a meeting between Yosaburo and his partner in crime Komoriyasu, nicknamed ‘Yasu the Bat’ (hence the birthmark on his cheek). The latter spotted Otomi and proposes to Yosaburo that she would be an ideal victim for extortion.

In this print he shows Yosaburo the house where Otomi stays. Later in the story the two lovers were rejoined, but unfortunately Yosaburo was arrested by the police and banished.

According to some ukiyo-e experts the right-hand sheet is regarded as an eulogy by Yoshitoshi to his mentor Kuniyoshi, who is famous for often including cats in his compositions. It is said that one of Yoshitoshi’s pupils, Toshimasa, was used as a model for the figure Komoriyasu. Others say that the portrayal of Yosaburo expresses the way Yoshitoshi looked upon himself.

Because Yoshitoshi himself was convinced this was one of his better prints, he was confounded when his publisher told him it did not sell well. It is said that his response was ‘They’re all blind then.’

Click HERE for more articles on the violent art of Yoshitoshi !

Click HERE for the price of the above Kunisada piece and more…! 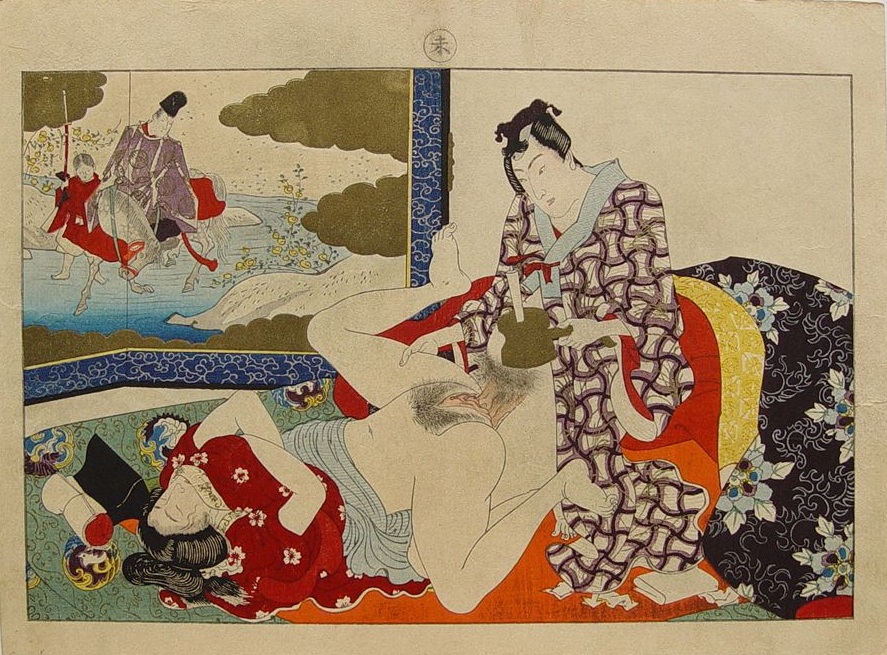