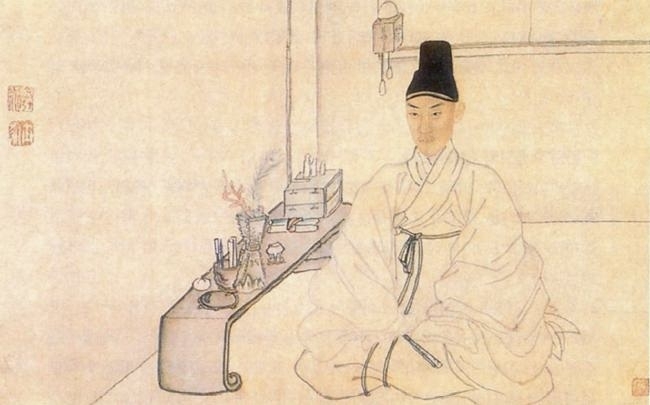 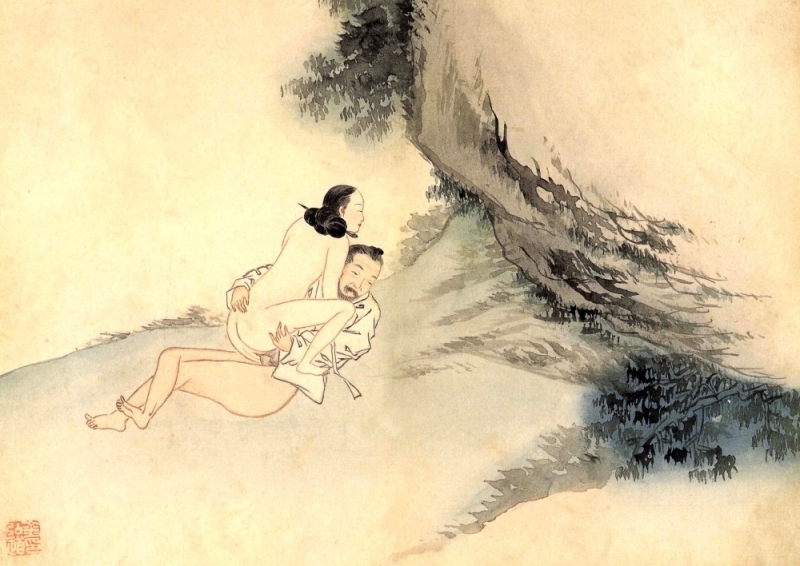 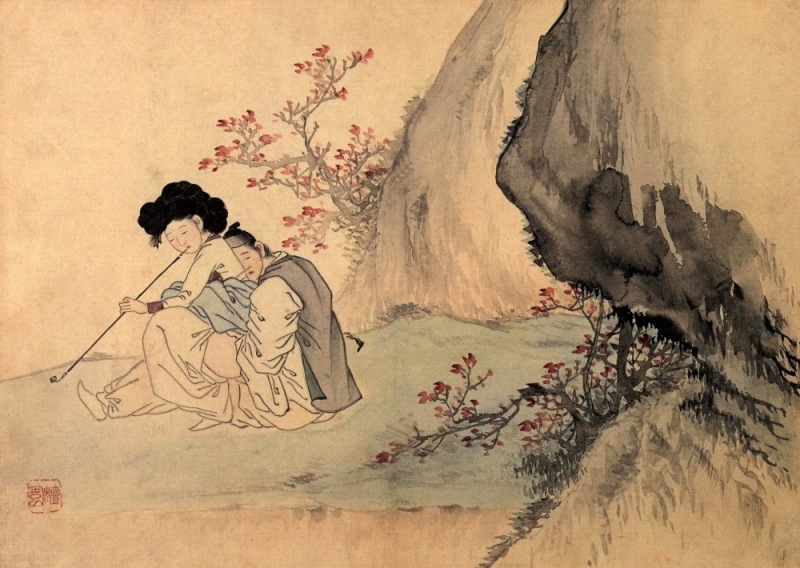 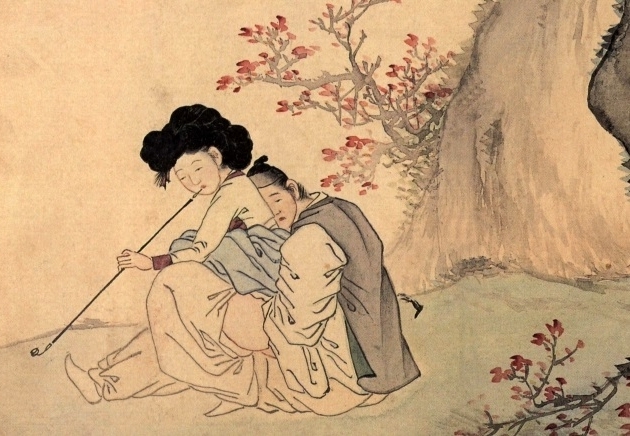 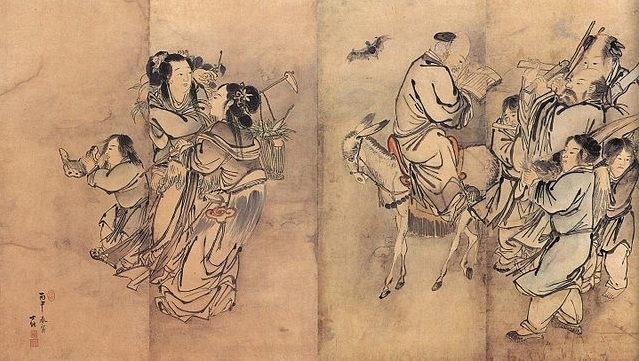 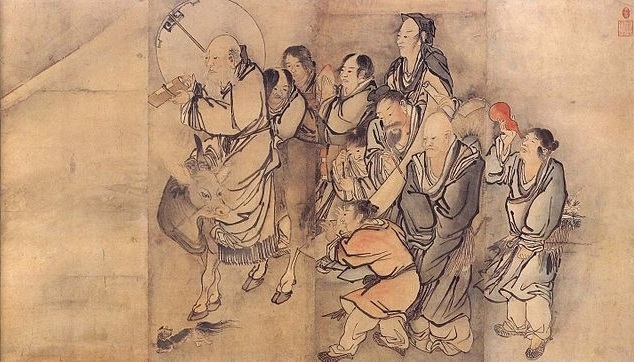 From The Royal Portraits To Spring Pictures 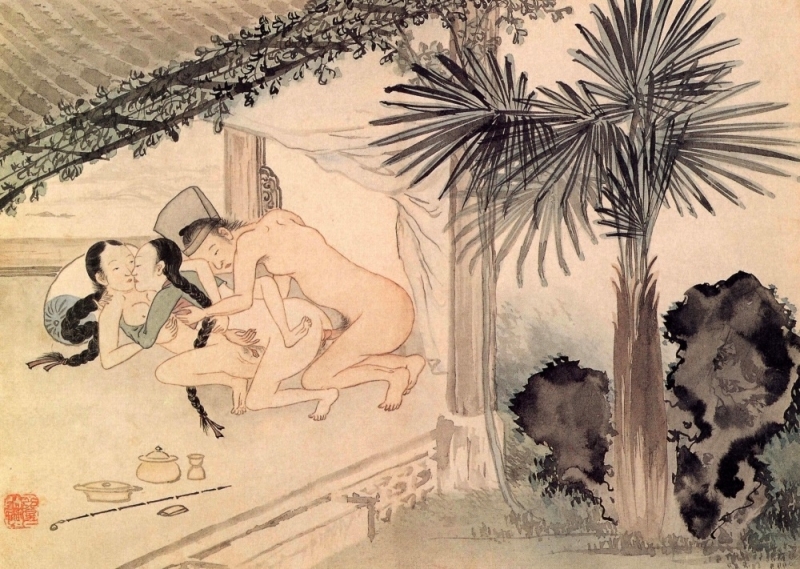 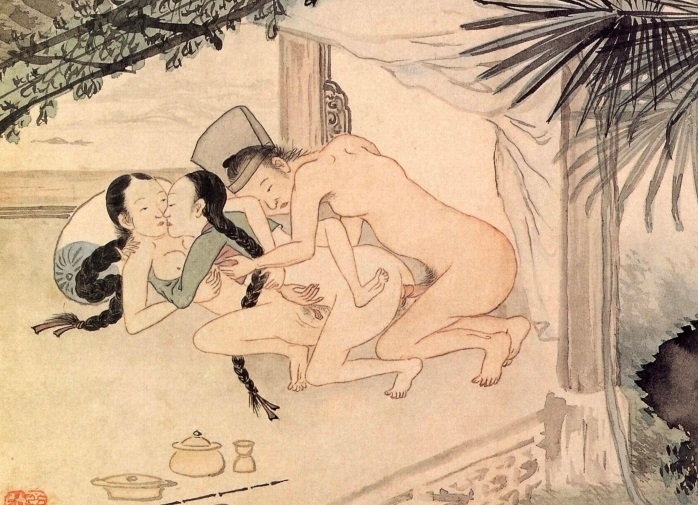 Two Lesbians And One Scholar

One of the most interesting Chunhwa paintings attributed to Danwon is a threesome with two lesbians and one seonbi, as we can judge by the headpiece he wears even during the copulation. Seonbi was a term for a scholar who devoted himself to studies, not pursuing a government career. Despite their morality and principles, Korean scholars wouldn't mind spending time with attractive females. Apparently, there are two young gisaeng (female entertainers, analog of geisha) or courtesans. Their hairstyles were usually worn by unmarried girls. The phallic composition behind the figures consists of weirdly shaped rocks and a palm tree. Rocks symbolized longevity and persistence, which were considered scholar's virtues. The fan palm, probably brought from China, played a role of a fashionable decorative element. The painting is curious because it involves a lesbian encounter that rarely can be seen in Chunhwa, and arises the question of whether there were any gay images. 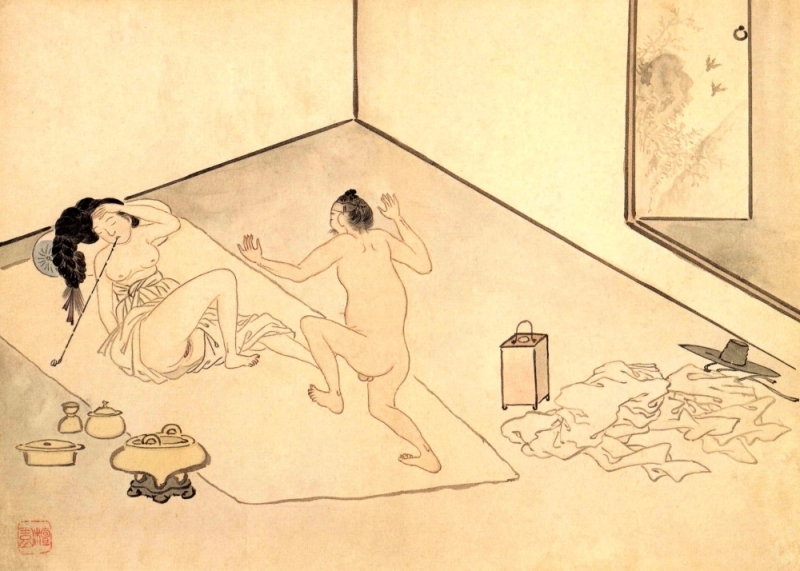 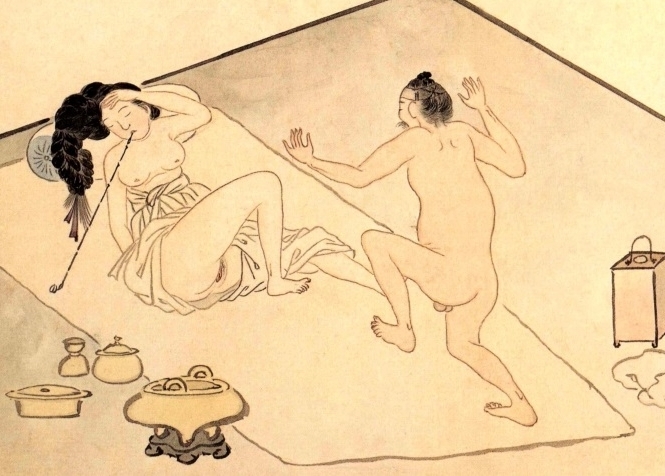 The Longer The Better

Yet one amusing detail that specifies Chunhwa is a tobacco pipe appearing in almost every painting. In one of Danwon's paintings, we see a scene between a weary courtesan and an excited male, yangban, a member of the Korean gentry, as we can conclude by his wide-brimmed hat. The detached woman doesn't care about her visitor, which is emphasized by her smoking. Tobacco was brought to Korea from Japan in times of the Imjin war (the sixteenth century), and it seems that Japanese people hadn't ever been such avid smokers as Koreans would become in the following centuries. Like any bad habit, initially, smoking was considered healthy. The climate and soil were suitable enough for tobacco cultivation, and soon it turned into a profitable business. Both men and women smoked until 1880 when the habit was stigmatized. The size and material of the pipe depended on the social status of the smoker. The longer it was, the wealthier the owner should be. The most expensive pipes were made of jade. 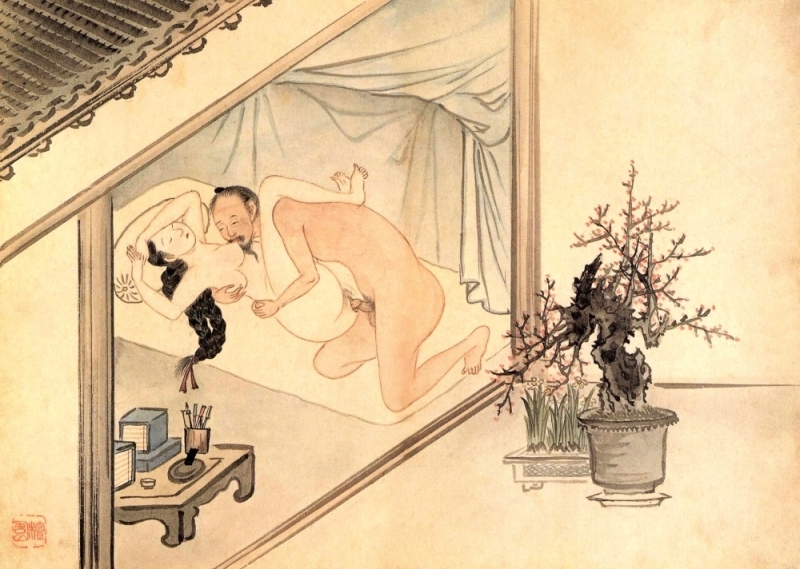 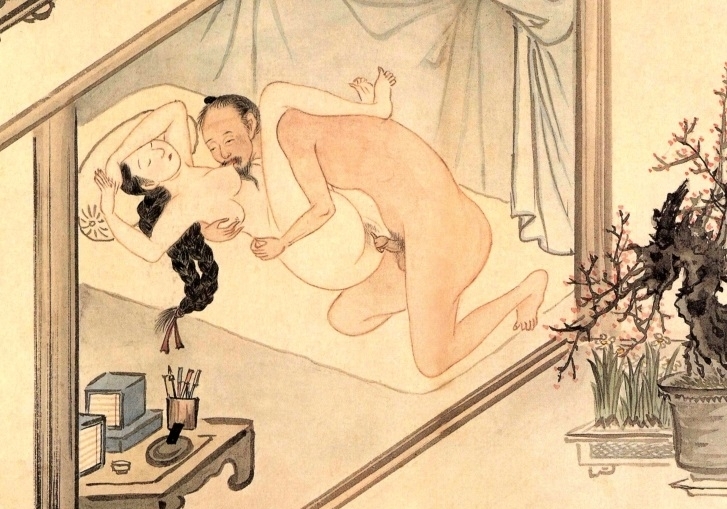 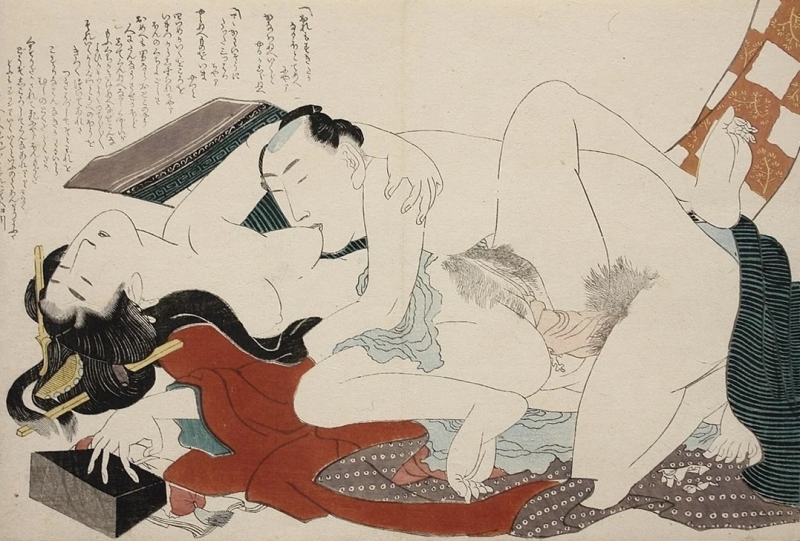 Another sexual play may remind you of many Shunga prints involving nipple sucking. The scholar left aside his books and writing tools to use some other instruments. Unlike the female from the previous painting, this woman seems to be fully engaged in the process. The blossoming plum in the vase points to the spring season. 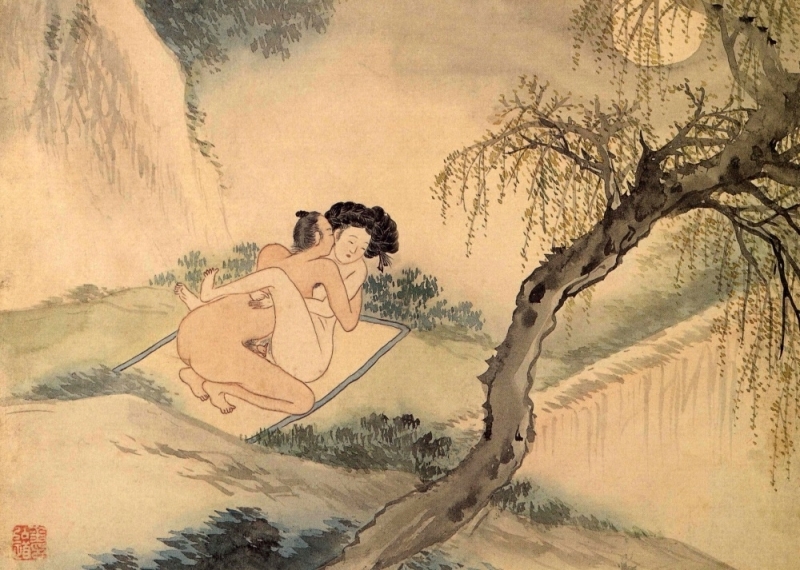 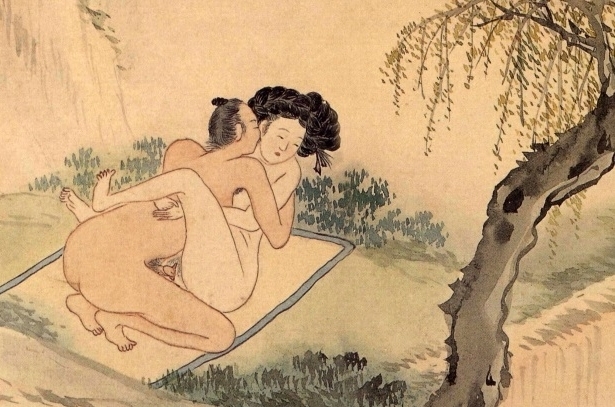 The most romantic painting of the set is the one that depicts a naked couple making love in the night field. We don't know who they are, spouses or secret lovers. Also, we don't see any clothes around. The moon and willow tree are the symbols of femininity. As known, the willow also means grief and parting, but at the same time, it can signify fertility like most plants. The tree trunk reproduces the contour of the female figure. Its diagonal position creates a voyeuristic illusion as if we were unwanted witnesses of the secret rendezvous. 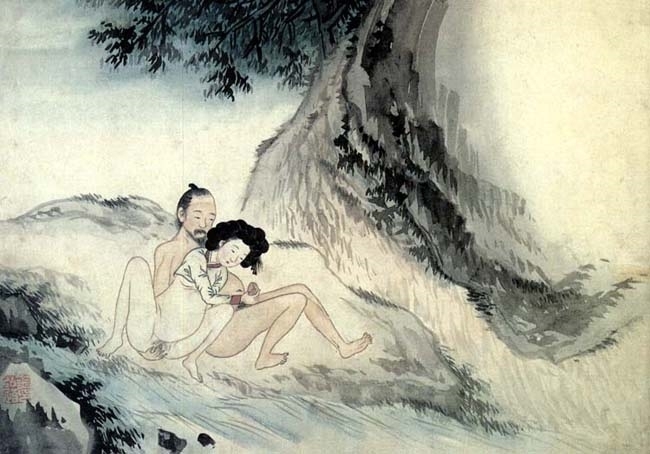 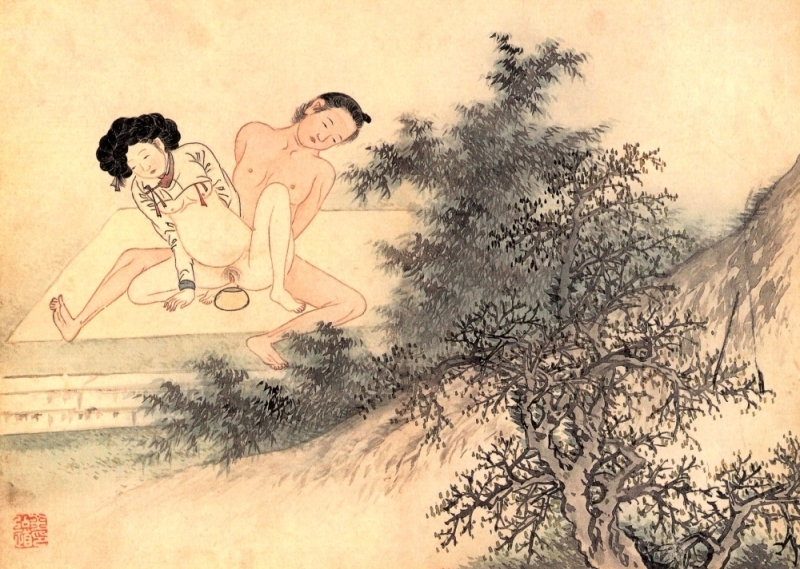 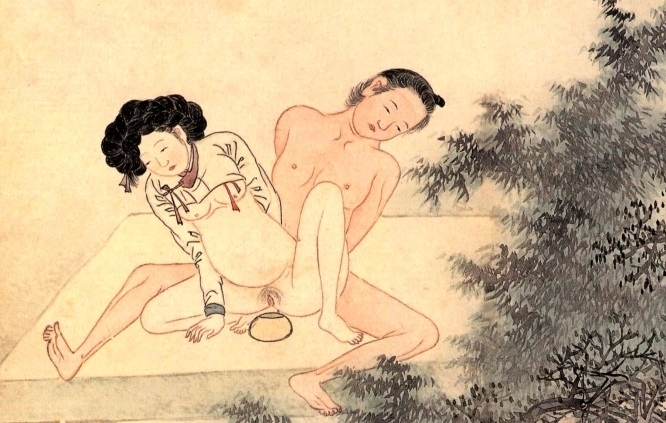 As soon as in Confucian Korea sex was tolerated because of its reproductive function, the female partner was frequently depicted as pregnant. The first couple (fig. 10) is engaged in mutual masturbation. The woman with a swollen belly, fascinated by the sight of an erected penis, wears only a short jeogori blouse while the man is fully naked. The absence of a belly button on the female's body is a recurring detail that we can't explain. Remarkably, in one of the later depictions attributed to Hyewon, the pregnant partner is portrayed with a navel (fig. 12). As known, in many cultures, female navels, due to their connection to birth-giving, were considered sacral, so that's possibly the reason for artists not to depict these body parts even in explicit images. Another painting (fig. 11) featuring a pregnant woman depicts her sitting above a small pot with a male partner behind. She stimulates male genitalia with a hand, and, possibly, the pot is a vessel to collect vaginal fluids. The couple's activities are hidden by the bush, which, again, adds to the scene a voyeuristic vibe. 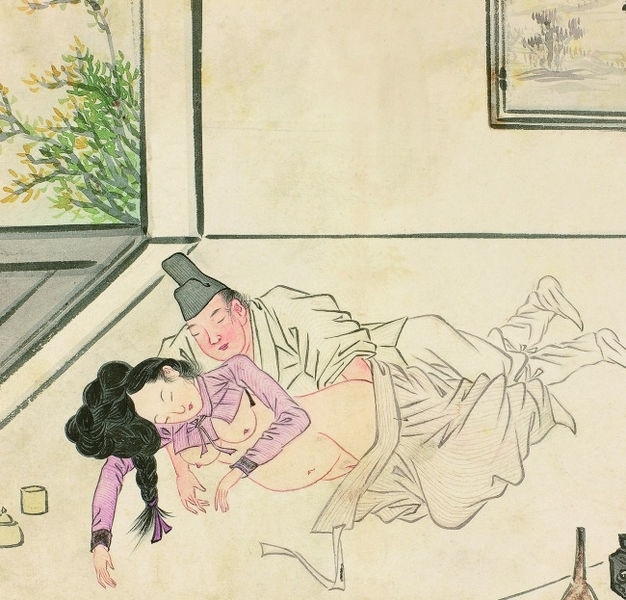 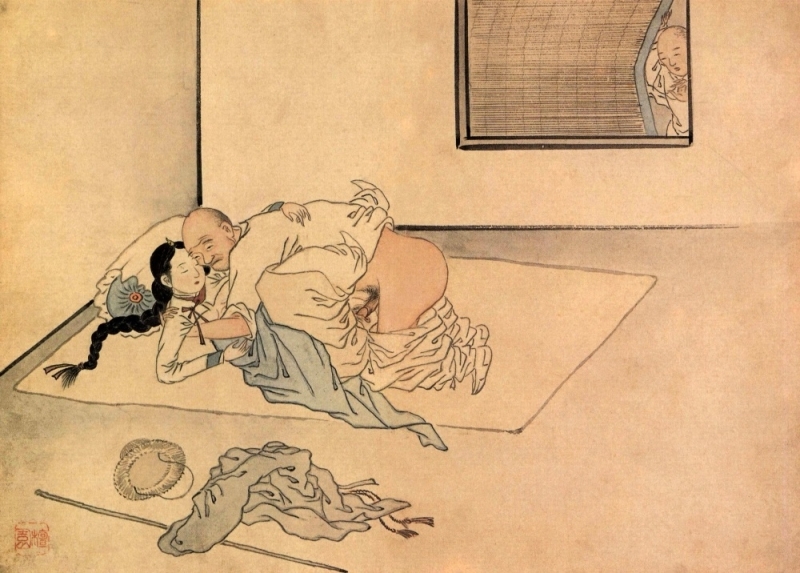 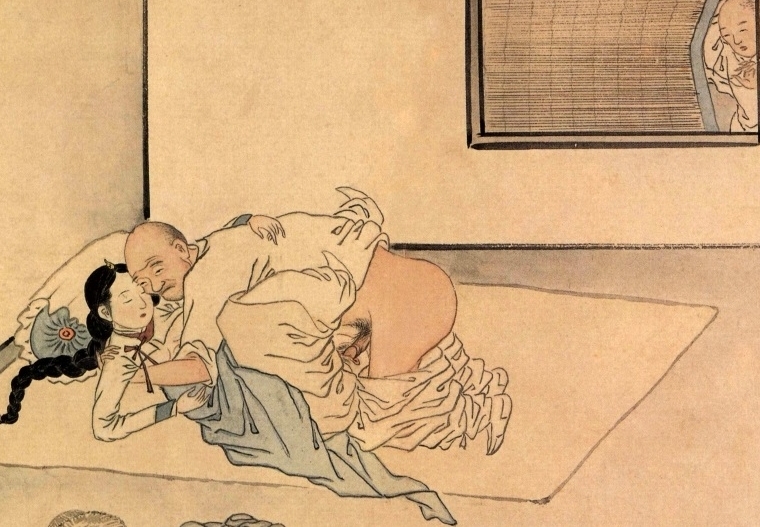 There are lots of anecdotes about the lust of European monks, but Korean monks are lustful too. As far as we can judge by a description from davincimap.co.kr (and not speaking Korean we hardly can, to be honest), the monk who copulates with a girl was supposed to pray that she would deliver a boy after marriage. Maybe she's only a young maidservant, but still, the Boccaccian version seems more interesting. We don't know whom she will give birth to, but she definitely will. 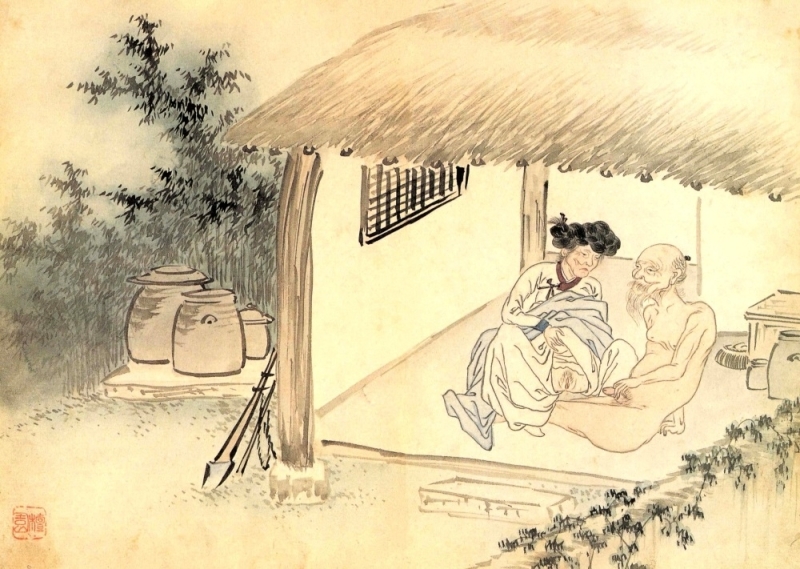 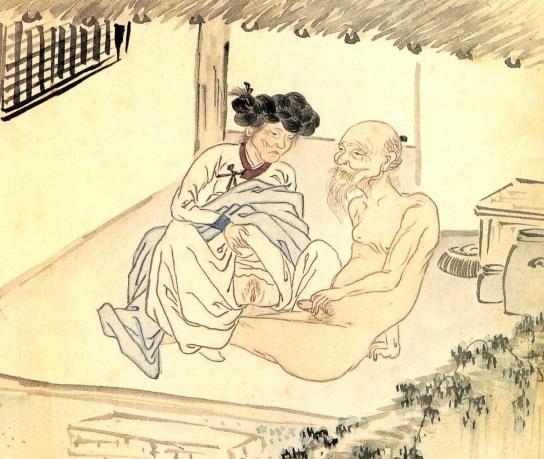 The amusing scene of the senior couple who feel the last rising of fire in their loins can be seen in some Shunga prints and Korean paintings as well. The man is fully undressed, which contrasts with a fully dressed woman. Possibly, he had been doing some work in the garden and then washed himself using water from large vessels in the background. 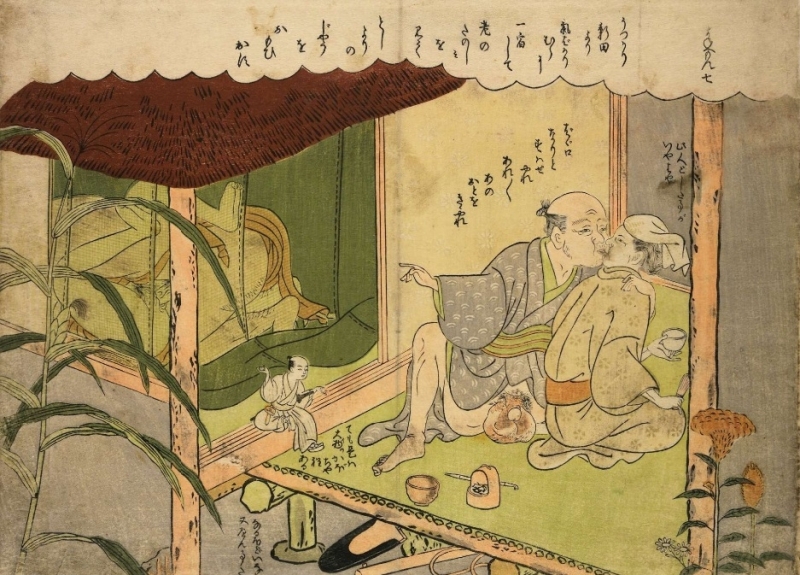 What do you think about the Korean shunga by Danwon? Leave your reaction in the comment box below...!!