Thematically his work is reminiscent of the Druuna series by Paolo Eleuteri Serpieri while the representation of the women (all beautiful) is similar in style to that of Manara.

The added commentaries to the drawings below are by the artist and the text included to the "ESF' (Endangered Species Foundation) drawings are written by Vessive (amateur writer of sci-fi erotica)... 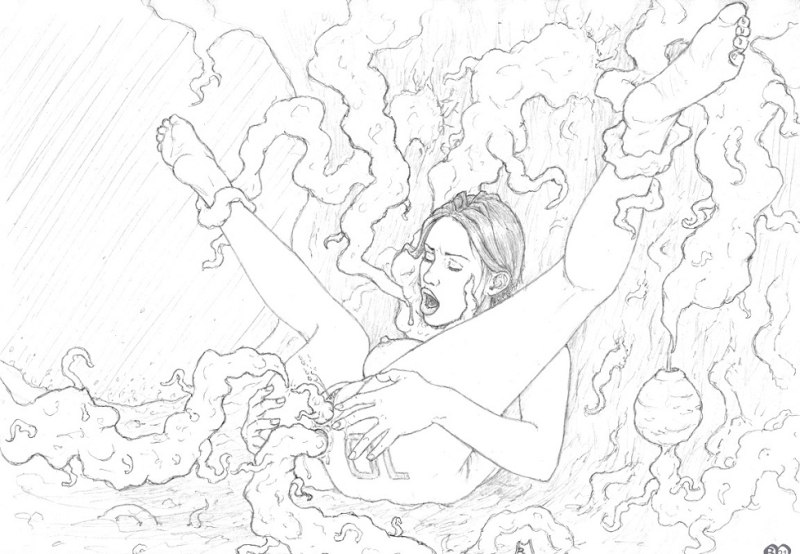 Heavy rain forced Ten to seek shelter in a nearby cave. She leaned back and tried to ignore her hunger. Suddenly something slid around her left ankle and forced her leg upwards. She tried to free herself but strong roots began to entangle her and pushed her legs apart. A thick root gently touched her face and Ten saw flashes of scene before her eyes. A vast landscape, the single, ancient tree on top of a hill, small springs in lush valleys... as the tree tried to communicate with her, something pressed inside her ass.

*That´s not the right spot* she thought. A sudden vibration runs through the root touching her face and another root began to enter her vagina. Spreading her lips the rugged tip moved deeper into her, while the tree seemed to notice her arousal and still moved on to push into her other hole. Only little liquid shot out of her, as she had her first orgasm and her stomach rumbled in protest. The root on her face lifted her chin up a bit and another wooden tentacle approached her mouth, a thick, golden liquid dripping from it´s tip. 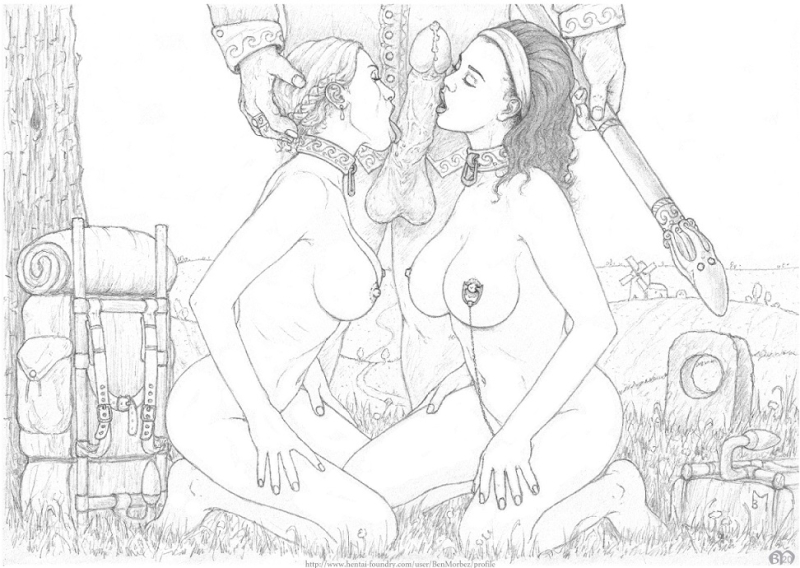 Two slave girls relaxing with their owner at the side of the road while the whole group is taking a short rest. 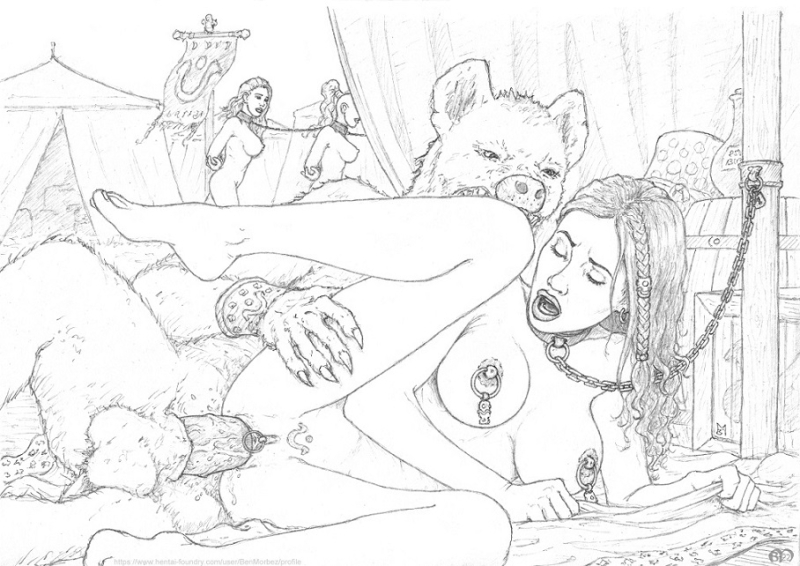 A Gnoll mercenary having fun with one of the company´s slaves. 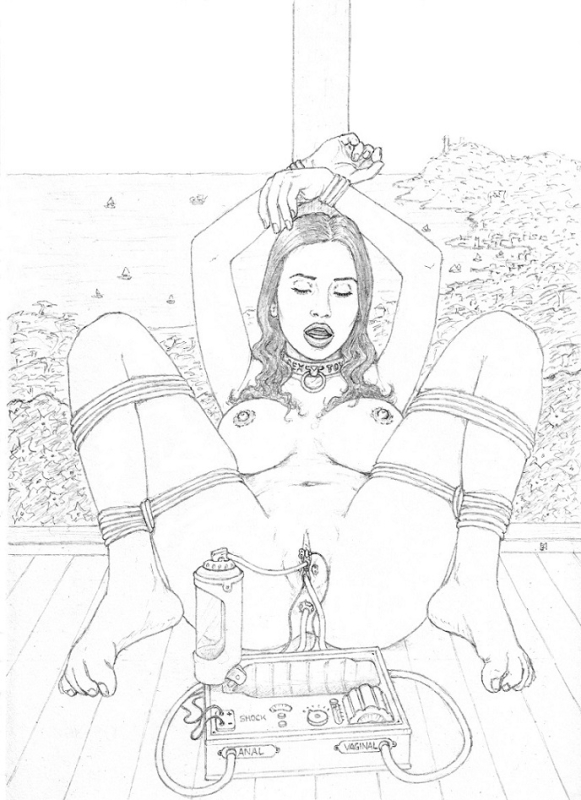 Her master was going for a ride and left her with the box. Background is supposed to be the ocean. 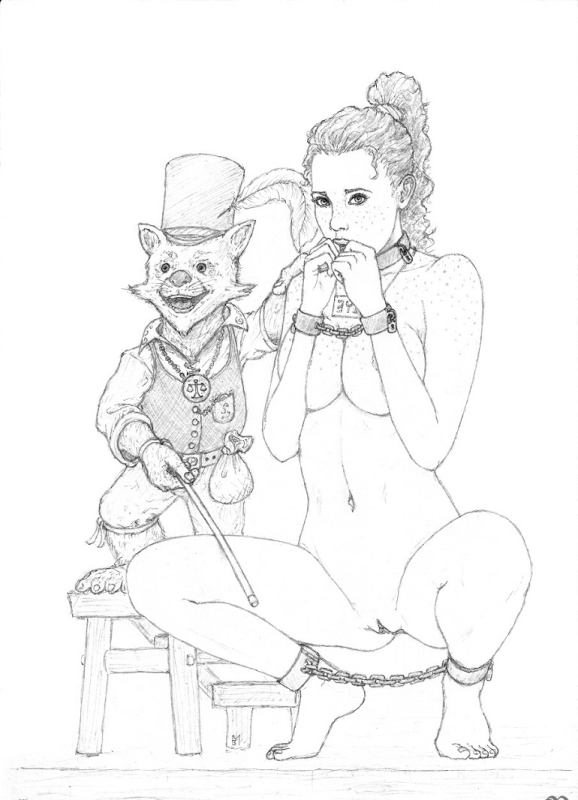 A shy redhead showing her pussy on the merchant´s orders. 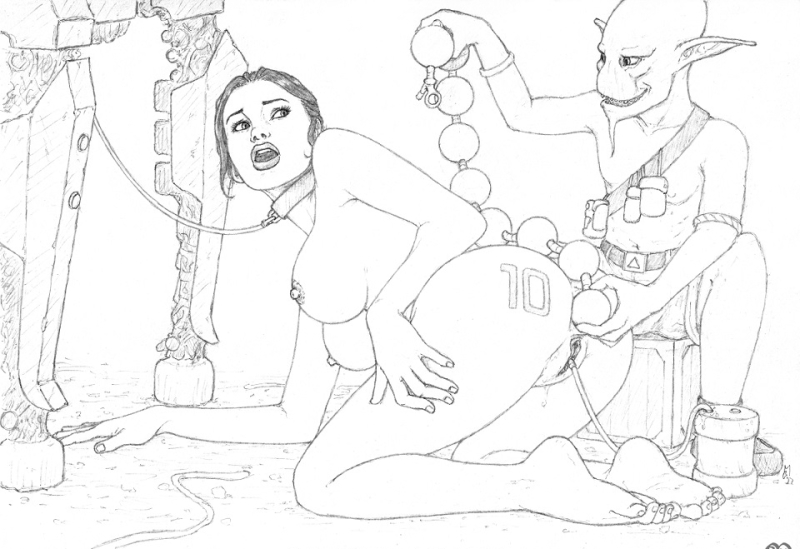 Gurak let Ten take a good look at the long chain of large beads. The hollow balls were connected with short, metal tubes. A new system to gather the fluids for which the small cask just wasn´t big enough. Although this meant one rod less in her body, Ten was pretty sure that the long bead chain would rattle in her body enough to add to her arousal when they were on the move. As Gurak pressed the first ball into her, Ten realized, that he would probably pull the chain out of her at each evening rest... this thought only caused her to get even wetter. 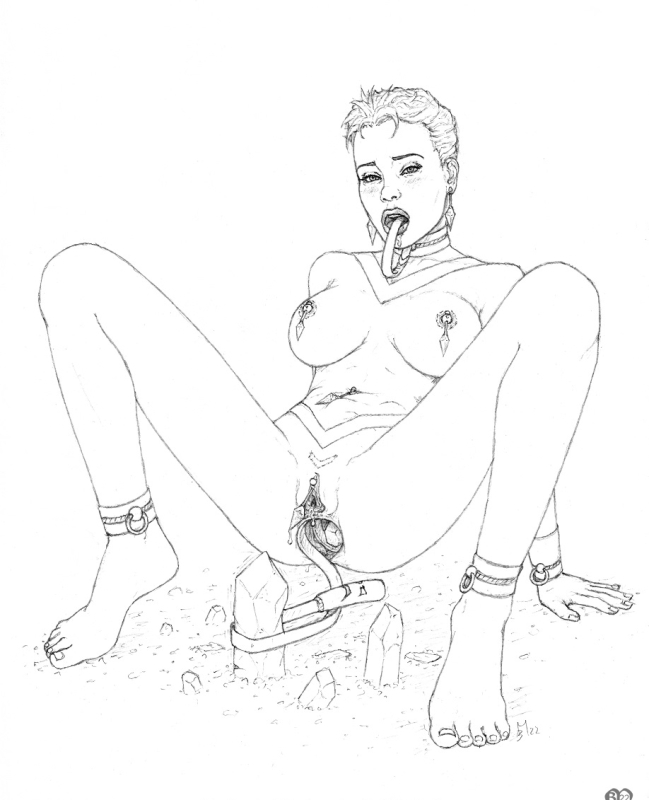 Master Pull had some unfinished business with a shady alien, getting rare crystals and smuggling them into the city. As they had made their way to the outskirts and into the wilderness, Julie had wondered where Master Pull planned to put the crystals. After entering the small cave, the leash glowed in a steady warm light and they soon found purple crystals sticking out the ground and the walls.

"Just relax, slave." Master Pull said, as he suddenly forced himself into her mouth and down her throat. Julie thought she would choke on the leash sliding into her, but Master Pull gave her enough room to breath. Some few minutes later, she felt her ass getting stretched and she could see Master Pull´s head emerge between her legs.

"Plenty of room in there, as I expected. Let´s begin with one of the smaller ones." He wrapped the leash around one of the crystals and with a sudden pull, broke it off. A moment later, Julie realized, where Master Pull´s planned to put the crystals, as he pushed it into her wide open asshole. 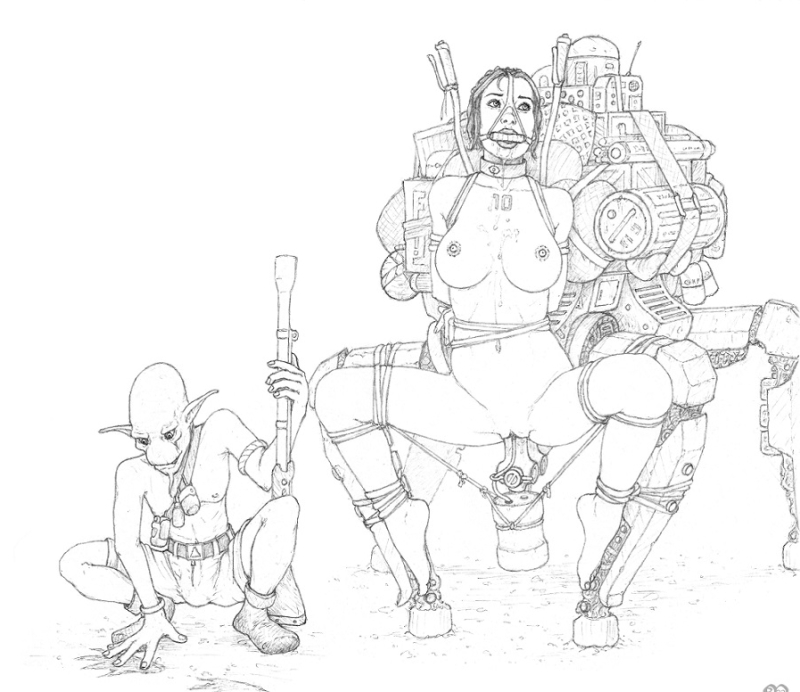 Gurak checked the strange track in the dirt. He had stopped his full packed, automated beast of burden at the very moment he had noticed the prints crossing his path.

While her new owner was investigating the ground, Ten could finally catch some breath as the mechanical walker was standing still. Gurak had attached her as some kind of living hood ornament on the front of his mech. He kept her gagged and impaled on two, long rods in her pussy and ass. This duo had been moving with every step of the mech, fucking her holes for hours. Her orgasms had been forced through a tube, sticking in her peehole on the one end, with help of some strange plug, and ending in a small cask, dangling under the mech. 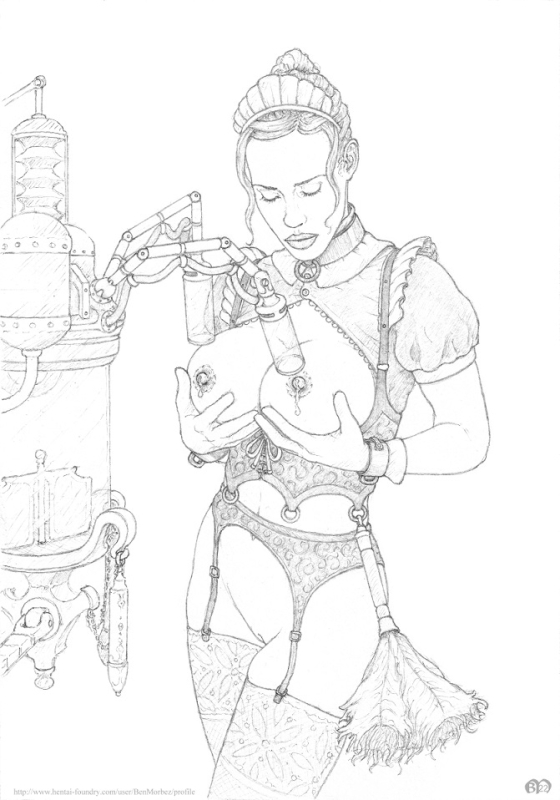 A little 'steampunkish' maid taking care of her lactating breasts.

From the Endangered Species Foundation Database:

The Tokzi are reminiscent of beehives. Although they can not really be considered insects, their society is based on matriarchal hives, each of them with hundreds of males and only the queen and a few princesses. With contact to other species in the universe the male Tokzi soon discovered that other species had mostly equal ratios of males to females. While unrest grew within the males, craving more sexual release with females, we were asked by a council of several planets to contact one of the outposts and try to provide a solution to the Tokzi´s problem, as they grew nervous to the potential of violent outbreaks within the Tokzi empire.

The queen of the outpost hive was very interested in our proposition, ordered some of her most trusted guards to accompany us and try to sate their lust with our assistants.

Several of our girls were very eager to volunteer for a test run. We were quite surprised by the seize of the male Tokzi´s penises as they penetrated deep into the wombs of our girls. Although some girls passed out, the males were obviously very satisfied to relief themselves.

This mission is quite a stretch from ESF´s normal work, but our offer on a free trial on human women brings us in an interesting position. Slave trading companies will be eager to expand into the Tokzi market and the council will provide several new opportunities for our work.

I will advise on a minimum height of the girls the companies might trade to the Tokzi though, considering our observations. As Silvia was just nearly passing out and her womb could just handle the penis of the Tokzi, I will take her specifics as the minimal requirements. 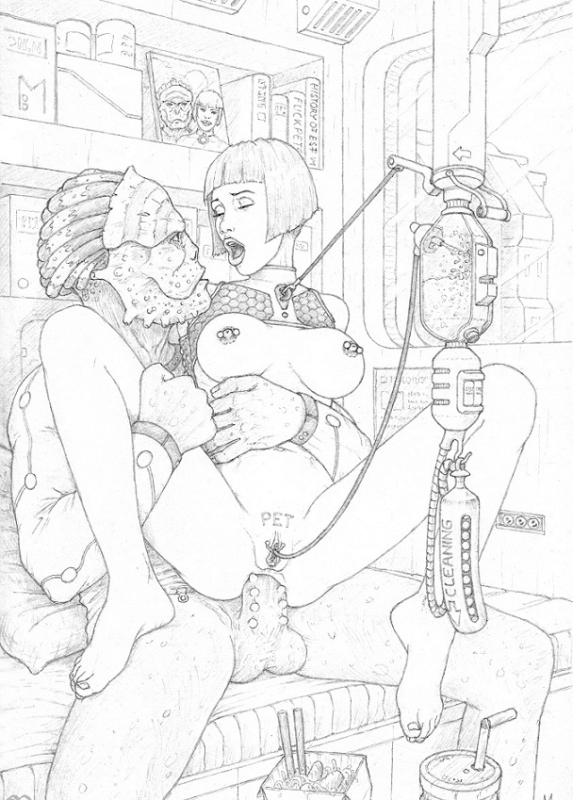 "I´ll just gonna relax, man. Just another hour and I get myself some Mr. Wing noodles, go home, open a cold Toka and put on my comfortable, little pet."

"You realize, that you need a special permission to use the cabins with another person?"

"Ha, what you´re talking about? She´s clearly a pet."

"Oh no, it clearly states on the receipt that she was purchased from Premium Fuck Pets. As does the little tattoo."

"So with that logic, you´re fucking an animal!"

"I see no problem with that, maybe you should widen your horizon a bit" *giggles* 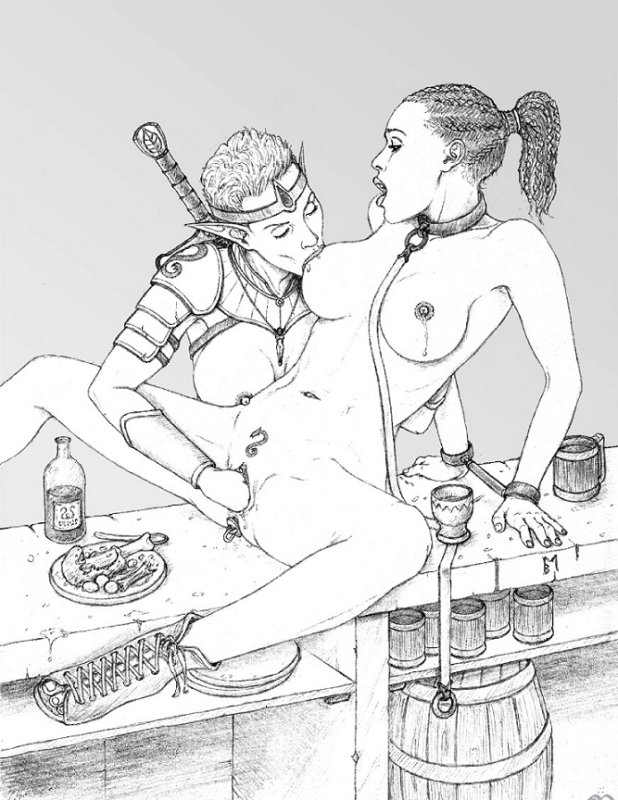 Joyana enjoying her dessert from her favorite slave.

Joyana might become a new OC of mine. She is supposed to be Kitaria´s daughter, an half human half elothrian slavehuntress. She´s more dominant than any elothrian female and loves hunting and training beautiful young women. Although she could live among the Elothri, she loves to be on the road. The slave in the picture might also become a permanent companion of her... 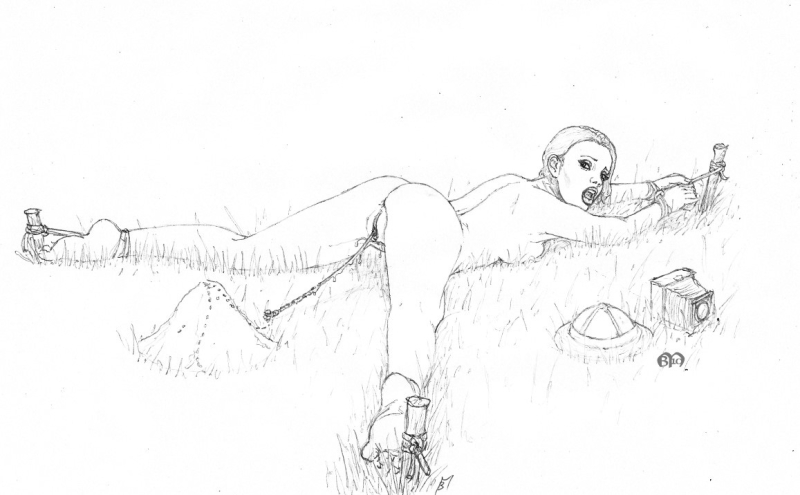 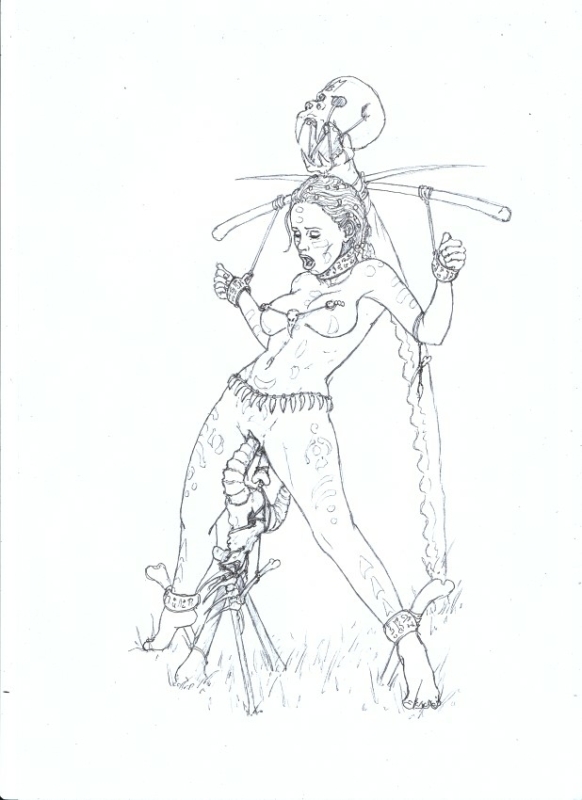 Evil tribe brings an unusual sacrifice to their spirits... through the bones of long gone beast... 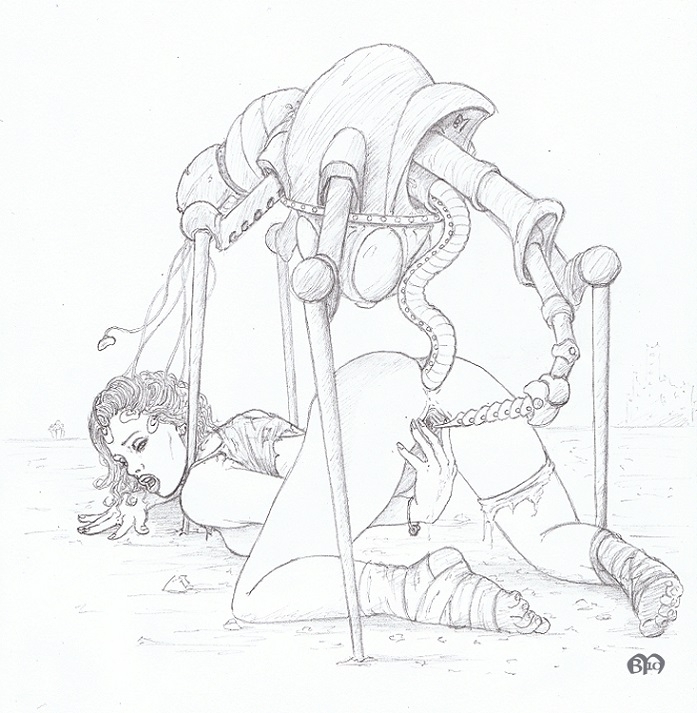 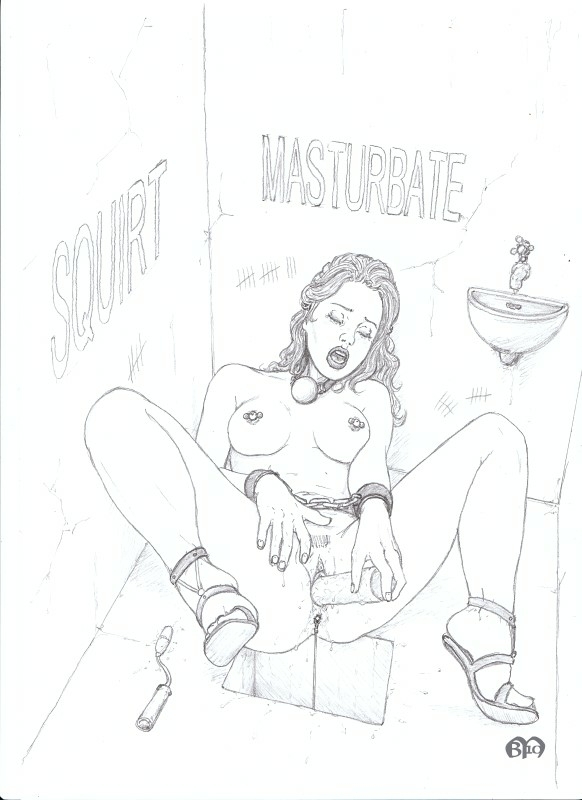 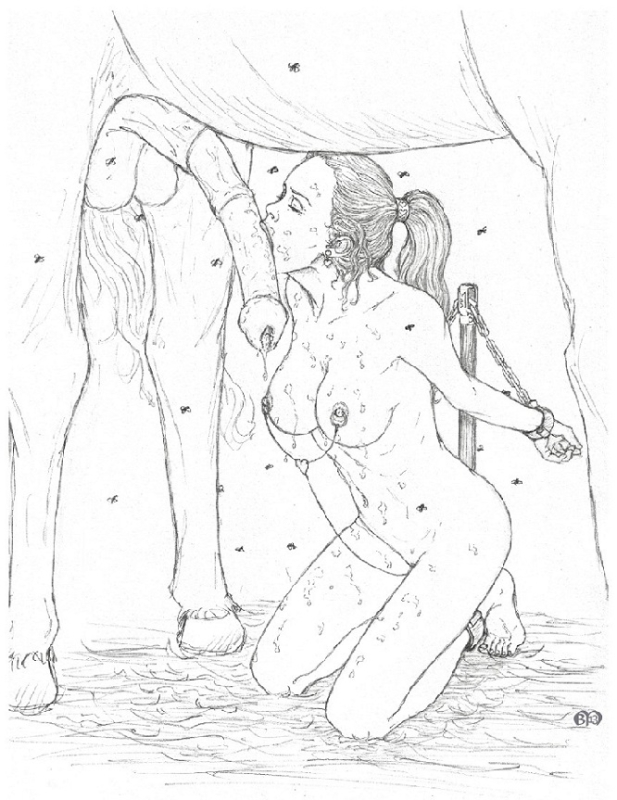 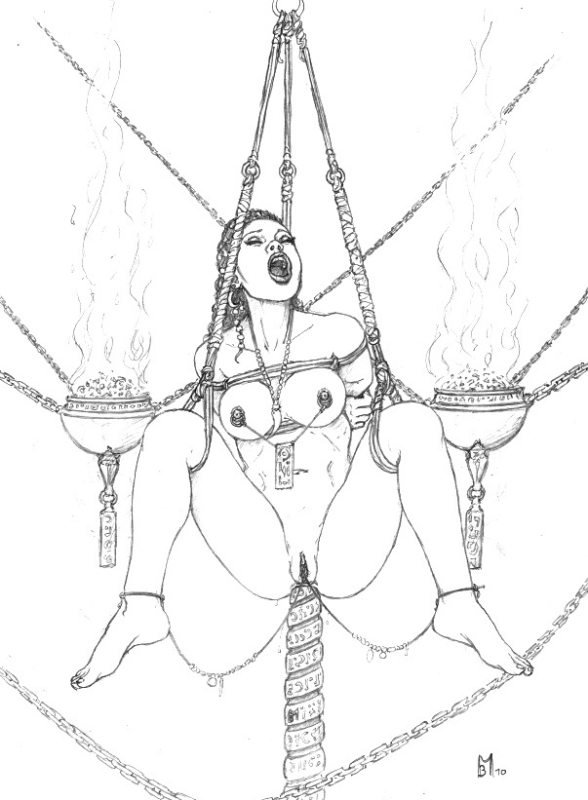 Tribal girl in a worse situation 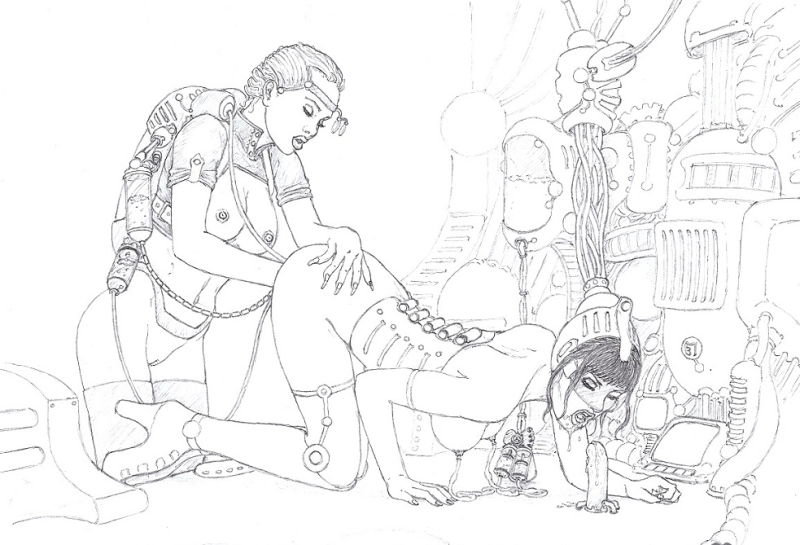 In Premium, you can find an extended version of the above article with no less than 47 striking examples of Morbez's tied beauties (and stories)...

What do you think about the drawings of Ben Morbez? Leave your reaction in the comment box below...!!