Jade Rabbit Having Sex With the Moon Goddess Chang'e

Recently I obtained a special set of koban-sized shunga that all depict amusing and deviating designs that are attributed to Meiji genius Kawanabe Kyosai (1831-1889). Striking images such as a man in a snowy forest who is groping between the legs of a female snowman he just built. Another one features a spellbound monk who is gazing at a giant vulva yet another portrays shoki the demon queller who has a gay encounter with a demon.

‘The Moon Goddess Chang’e and the Jade Rabbit‘ (c.1870s) attrib. to Kawanabe Kyosai

This shunga portrays the Goddess Chang’e and her companion, the Jade Rabbit, making love while floating through the clouds with the moon in the background.

In the ancient Chinese folktale the immortal goddess Chang’e was transferred to the moon after eating a magic pill. This pill was a gift earned by her lover, the archer Houyi after he had shot down nine of the suns and therefore saved humanity. Half of this pill would make him and his lover immortal. Unfortunately he didn’t inform Chang’e about this and after she ate the pill she instantly became immortal and floated to the moon. Houyi was grief-stricken and tried to shoot her down but failed to do so and therefore she has to stay on the moon forever.

‘The shape of the Jade Rabbit as seen through a telescope’ (www.ThatWizardCameFromTheMoon.com)

Chang’e’s companion on the moon is the Jade Rabbit (or Moon Rabbit). He was already on the moon and in contrast to the Moon Goddess he can leave it. He sometimes comes down to earth and it is believed that he once came down and rescued Beijing from the plague. Since ancient times people have been able to “observe” him on the moon and is part of the folk mythology of many civilizations such as the Aztec, Korean and the Japanese. 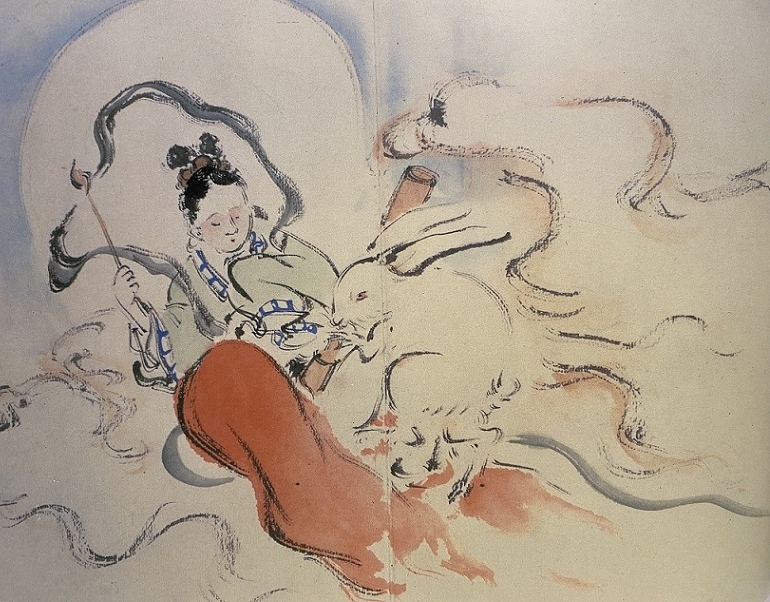 Painting of 'The Jade Rabbit inserting a pole into the private parts of the Moon Goddess' (early 20th century) (Source: Tuyashun on Twitter) 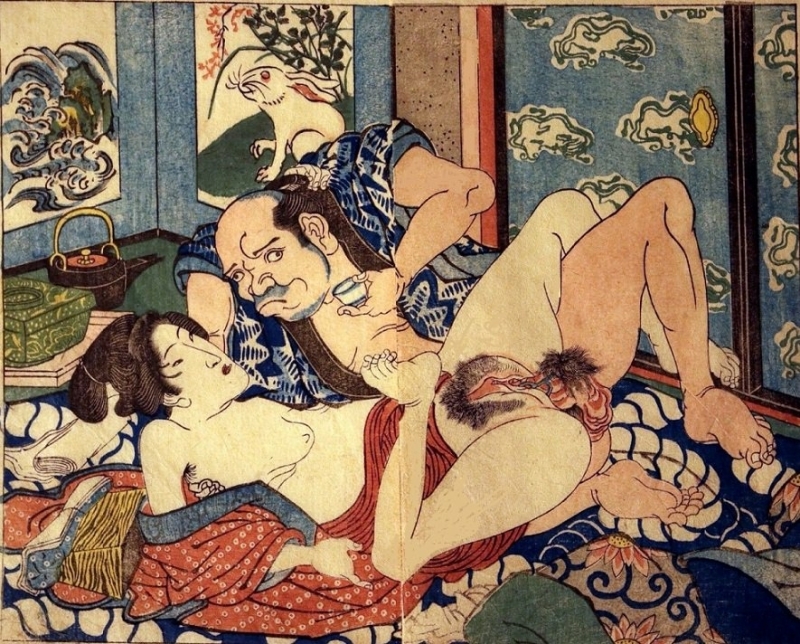 'A moronic man making love while drinking sake. The Jade rabbit is featured on the screen in the background' (c.1830)

Click HERE for another post (including video) on this subject as seen by the great Kitagawa Utamaro!

Senju Shunga on His Evolution, Classical Shunga and Instagram
04 november 2020