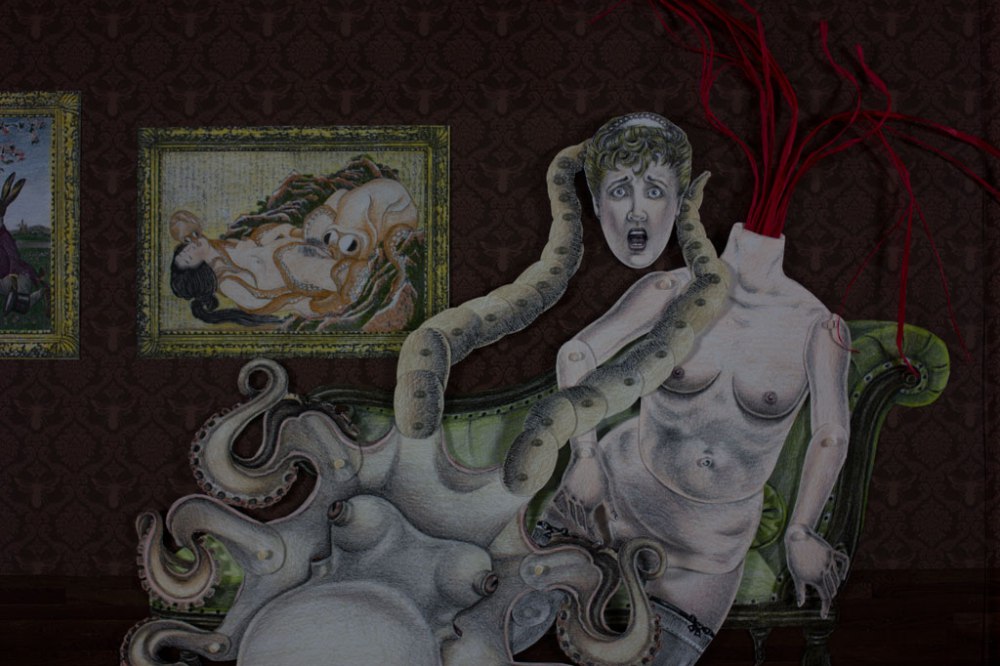 We held a short interview with Jennifer Linton on her animation movies:

Shunga Gallery:  I love the use of the intertitles in your subversive tales as they were added in the movies of the silent era. What appeals to you about this style?

Jennifer Linton: The intertitles serve a couple of purposes. As you mentioned, they call back to the era of silent film. The paper cutout-style of animation I’ve used is one of the earliest forms of stop-motion animation and would’ve been contemporary to films that employed intertitles. On a basic level, having inter titles meant that I didn’t need to incorporate a voiceover narration. Also, the poetic rhyming of the text nicely reinforced the Victorian-derived aesthetic of the film, and provided opportunity for humour.

SG: One of the paintings in the background of La Petite Mort is of Hokusai’s The Dream of the Fisherman’s Wife. Also in both (and more of your) movies the octopus is an important character and a recurring theme. What’s your fascination with Hokusai’s print and the octopus in general?

JL: I’ve long held a fascination with a type of Japanese illustration that depicts “ero-guro” content. This type of content combines eroticism with absurd and grotesque elements. Hokusai’s famous shunga print predates the era of ero-guro-nansensu by over a century, but was highly influential on this later cultural material. The octopus is a fascinating creature; intelligent and beautifully alien to our eyes. The movement of an octopus’s tentacles looks great in an animation, which I one reason I use them so frequently.

SG:  Also striking are the articulated figures in your movies. Is this for aesthetic or practical reasons? Are you familair with the articulated puppets used in the toy prints (shikake-e) in shunga ?

JL: The articulation of the paper puppets serves the practical purpose of allowing them to be animated, but I’m also a fan of the aesthetic of paper puppets. While the movement of such puppets can be stiff and unnatural, this stiffness works great with material that is surreal, fantastic and dream-like. Surprisingly, I was not previously familiar with shikake-e puppets! Thank you for alerting me to this tradition.

SG: What movies and/or artworks had the greatest impact on you and your art and why?

The first one is called Domestikia, Chapter 6: La Petite Mort. (4:34 minutes) released in 2013. It is summarized as a tale of love, betrayal and one vengeful butterfly.

The second one is called Domestikia, The Incident in the Nursery. (2:01 minutes)  Storyline: The Nanny dutifully rocks a bird-headed infant to sleep whilst its older siblings play on the floor of the nursery. And then, suddenly and unexpectedly, a butterfly happens.

Click HERE to check out an extensive article on Hokusai’s The Dream of the Fisherman’s Wife…!!! 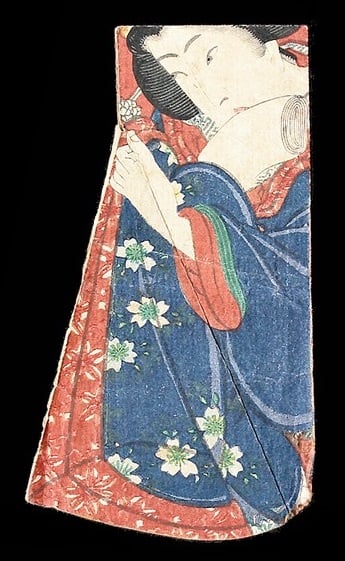