The Swedish artist Matti Sandberg (1968), better known as Senju Shunga, has been fascinated by Japanese art, history, culture and religion since his early twenties. In December 2012 he painted his first shunga (which started as a small idea initially) and has not stopped ever since.

In his latest works that are featured below, he refers back to older favorite themes…

Portrait of the ghost of a young woman sitting beneath a large full autumn moon (Fig.1). She stares down sideways at the many human skulls half hidden in the tall grass. Does her mesmerizing beauty mislead us? Are these perhaps her victims?

The Japanese ghost varies from its western equivalents in a lot of ways. One of them is that they are not bound to a specific time or place. A Japanese ghost can show up wherever it wishes and at any moment. And if you come across one there is a big chance you will die from sheer shock of its appearance.

Senju’s earlier work (produced in 2017) on this ghost theme shows the same female figure in the same pose. The artist was absorbed after he had finished the first painting. In his book Kagami – Contemporary Shunga he remarks ‘This ghost is dangerous’ and ‘…Then I remembered that I had painted a ghost. If she still remained here, between worlds, this must testify that rage and sorrow now colored the waters of her ocean, ready to whip the water into a white frenzy that would devour any ship brave or insane enough to venture out. A perfect storm.’

In this new version (Fig.2) Senju added more explicit details that emphasize her threatening nature such as the bloody palm print on the scroll painting in the background and her bloody hand stroking her hair, that become visible through the lighted candle.

The skull in the grass depicted on the painting is common vanitas* motif, reminding us that life is short and who we were, what we did and all our struggles will not remain after we have departed.

In his earlier mentioned book Kagami, Senju tells,’If I would be forced to single out just one person out of all the great Japanese artists of the Edo period that has exercised great influence on me, it would be Katsushika Hokusai (1760-1849). His curiosity in capturing people, flora and fauna, myths, legends and everything conceivable in between heaven and earth has few equals in the recorded history of art.’

In the process preparing for his painting from 2015 called ‘Views of Fuji‘ (Fig.4), Senju suddenly realized that the folds of the kimono the young woman was lifting resembled the shape of Mt. Fuji. It was never his intention to add this Japanese Holy Mountain at first. He adds, ‘Perhaps the Mt. Fuji shape was a result of all those years he spent looking at Hokusai’s work’.

In ‘Fuji Sanchou ‘ a girl holds up her kimono and exposes her vulva (Fig.3). In this what the artist calls “improved” version he omitted the depiction of Mt. Fuji and now shows the complete figure standing in a rice paddy. Senju finished this piece early September of this year.

This painting called ‘Haru‘ (Fig.5) is a new take on a work that the artist produced back in 2013. In that work, Senju used digital painting as a medium for the first time. and gave the inspiration for four additional pieces. This whole series of five paintings used the ancient handheld bronze mirrors from the Edo period (1603-1868) as the starting point. each representing a specific season.

The circular motifs and flower tattoo on the young female are in the classical Japanese irezumi style. When Senju created the first piece he was still working as a tattoo artist  examining this style and therefore his art is imbued with the two worlds, tattooing and art. He moves freely between the both of them.

*a vanitas is an allegorical work of art that displays the impermanence of life, the uselessness of pleasure, and the inevitability of death, frequently including divergent symbols of wealth and symbols of mortality and death. 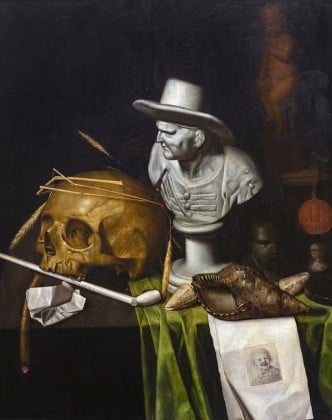 What is your favorite theme within Senju Shunga’s art? Let us know your preference in the comment box below…!!

A Sensual Ode to Art Nouveau, a Mysterious Goddess and Fox Spirit
16 september 2019

The new Yurei painting is my absolute favorite. Senju captures her seductiveness and danger in a. truly captivating way! I love it! Thanks Chris

Thanks Chris. I think agree although Shuugetsu (Fig.1) is pretty close!

I like Japanese ghosts. And succubes and all kinds !Bruno Thanks

Thanks Bruno. Well, you came to the right place!