Yuuwaku: The Temptation of a Female Ghost by Senju Shunga

Sometimes the human heart clings desperately to the idea of closeness and intimacy. Yuuwaku depicts this desperation and longing for love, dressing it in the imaginary fabrics of the classical ghost story. The ghost of Japanese myth and folklore holds a special place in my artistic and romantic heart, as the stories are often melancholic and breathes the air of very strong emotions. This scene, the first I created with a ghostly theme, is purely a fragment of my own imagination. 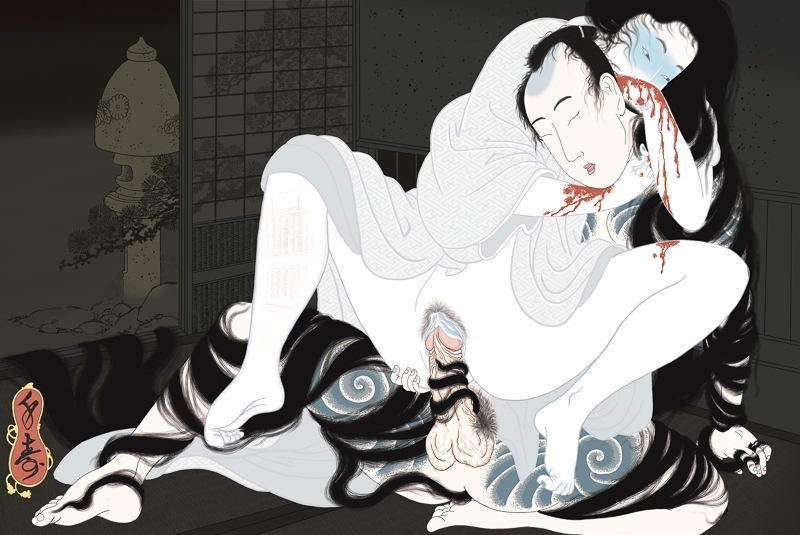 In the abandoned and run down old Buddhist temple a young man has sought shelter for the night and fallen asleep on the worn and mouldy tatami mats. Beyond the walls of cedar wood, darkened by age and weather, lies the night is black and velvety. Only the cicadas date to make a sound. His tattooed body suggests that he is not of the samurai class but rather a ruffian or gambler. Perhaps an Otokodate traveling from one town to the next, exhausting hospitality through boasting, drinking, hustling and cheating.

She is trapped between heaven and hell, tethered to the temple grounds where her body was buried improperly and in haste after her suicide. Her lover, the man who had sworn himself to her, even in death, had dishonoured their desperate suicide pact. He did not follow her into the blissful shadows. Afraid and hesitant, he had left her there, alone, to slowly bleed to death from the self inflicted cuts across her wrists. The old trees behind the temple had been the only ones to see her pass over into the dust and memories we shall all become one day.

In the tall grass shadowed by the cedars and pine she lay for little more than five days, all the while her family and friends would pass her by in their increasingly frantic and desperate search. Sometimes the randomness of existence plays tricks on us like that. Finally some children exploring the shady wooded area behind the temple had found her and she had been laid to rest accompanied only by the scent of incense and the chanting of a countryside Buddhist priest. 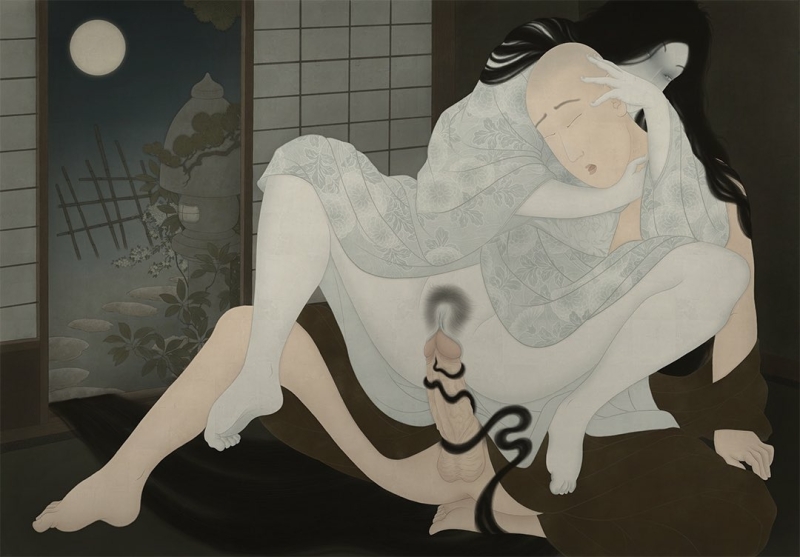 Now her ghost crawls on top of the sleeping man, holding him so close, so very close....She straddles him, lowering her hips over his hard cock. She cannot remember desire, only this pain of being all alone. Her long dishevelled hair floats around the dark room, coiling like snakes, every part of her ethereal being clinging desperately to a life that is no more.

She is confused and lonely and afraid. She will never leave him. He will never wake up again and never abandon her. The cicadas are to busy serenading to pay any attention to the two figures in their ghostly embrace. After her body was found behind the temple last spring not even children come here to explore or feed their curiosity. Summer, autumn and winter will pass and most likely no one will ever come looking for him.

And she will never be alone again.

The above text comes from the book Kagami - Contemporary Shunga . You can check out an earlier review by clicking HERE ...!!