Parodies on the Hell Courtesan by Senju Shunga and His Mentors

This is my version of The Enlightenment of Jigokudayu. This is a theme often explored in traditional ukiyo-e art by great artists like Tsukioka Yoshitoshi (1839-1892) and Kawanabe Kyosai (1831-1889).

Jigokudayu was a 13th century courtesan, a high ranking prostitute, from the port city of Sakai in the province of Takasu. All through history has almost exclusively been a self degrading means of human survival that consumes, chews up and spits out the women trapped within its jaws. 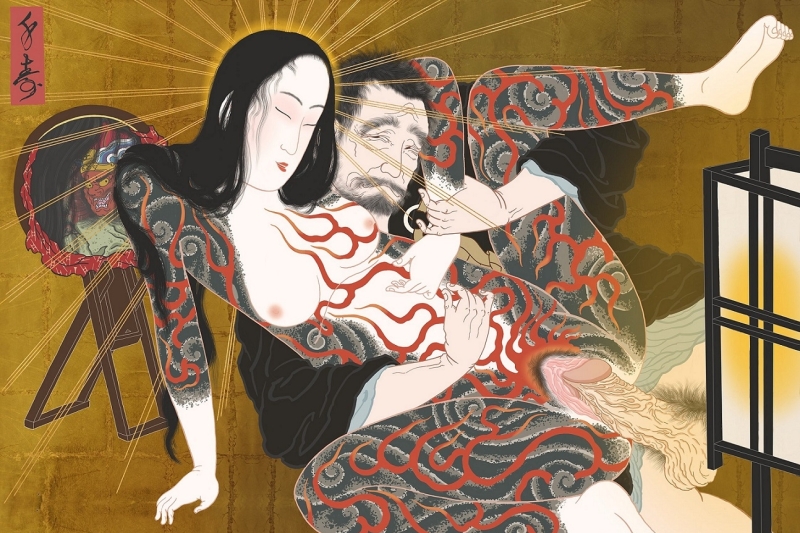 The idea of the happy hooker is one cultivated by men that regards it their right to use another human being's body as an objects in order to satisfy their sexual urges or boost their fragile and fearful egos. However, Jigokudayu experienced Buddhist enlightenment  and was presented with the opportunity to walk her path in a different manner and this perhaps why the story has maintained its popularity through the centuries.

Ikkyu (1394-1482) was a historic person. A great spiritual, human and religious person with a rebellious streak, a disarming honesty and one of the great Zen teachers of all time. He was a man of enlightenment that also drank rivers of sake, wrote wonderful poetry and regarded sex as form of practising Zen. Torn between a monastic life as the monk that became a priest and later even abbot over the largest Rinzai Zen temple complex in Kyoto, Daitokuji, and what he considers true reality. 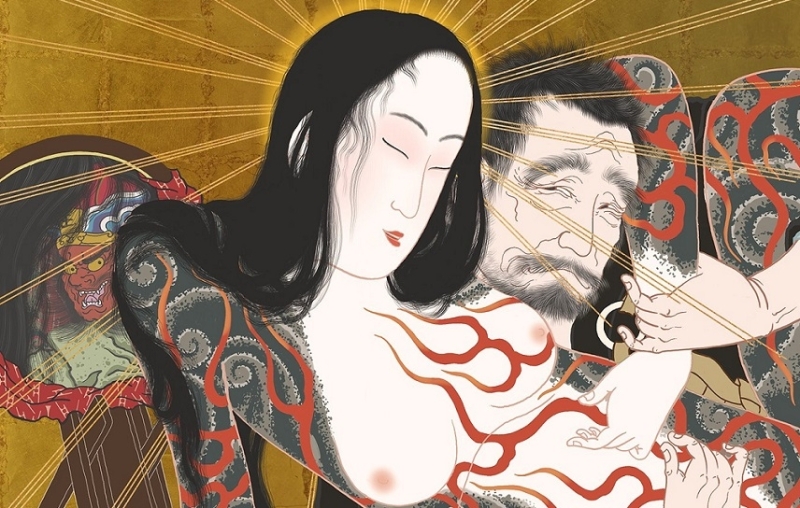 Harbouring a strong distaste for hypocrisy and the religious politics of his time, he spent a large portion of his adult life in brothels and drinking parlours. The story has it that it was Ikkyu himself that adopted Jigokudayu and helped her mature in her enlightenment. He also provided her with a literary education.

The traditional way of depicting Jigokudayu is to have her done up in high end courtesan fashion, complete with elaborate hair adorned with large ornamental hairpins and layers of kimono. The outer one is usually showing a scene from Buddhist hell, where Emma, the ruler of Buddhist purgatory, is distributing gruesome punishments upon wrongdoers and sinners. I chose to liberate Jigokudayu of her heavy robes and instead transform her skin into a colorful brocade. 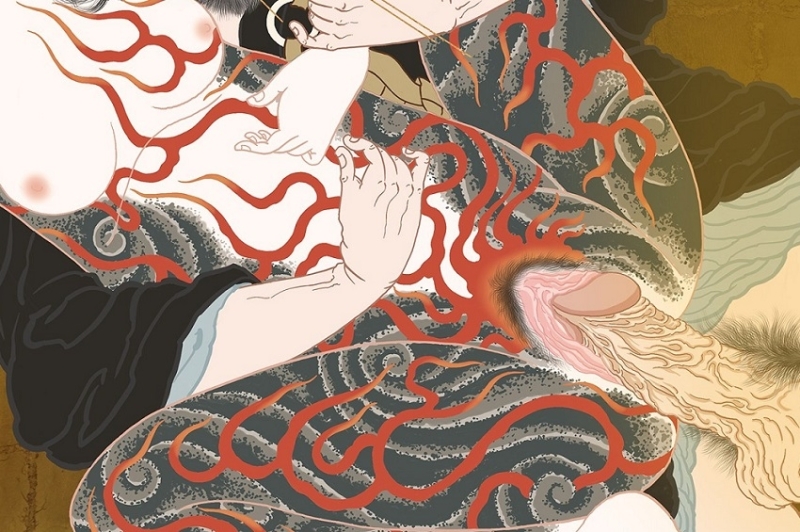 Ikkyu is the unshaven priest I have come to know through his many poems. For him outer appearances does not matter. His mind is set on the moment of breaking through in his image of enlightenment. Ikkyu's cock is the three sacred Jewels of Buddhism and Jigokudayu's pussy is an image of her human heart. He does not give her anything, yet she receives.

She has always possessed the truth, just like Zen speaks about becoming a Buddha and that we are already perfect in every way. We just got lost on the way here. This is why there is no need for penetration in my image. All she needs is to see herself as she truly is and the diamond wall will collapse. Her relaxed features tells us not of ecstatic orgasm and fleeting pleasures but of insights and capitulation in front of the inevitability of true reality.

And Emma, tattooed on her back and visible in the mirror, gets to play the voyeur, as his character in this human drama is being shown the door for all futures to come.As a little extra, you can find Senju's most recent painting below. 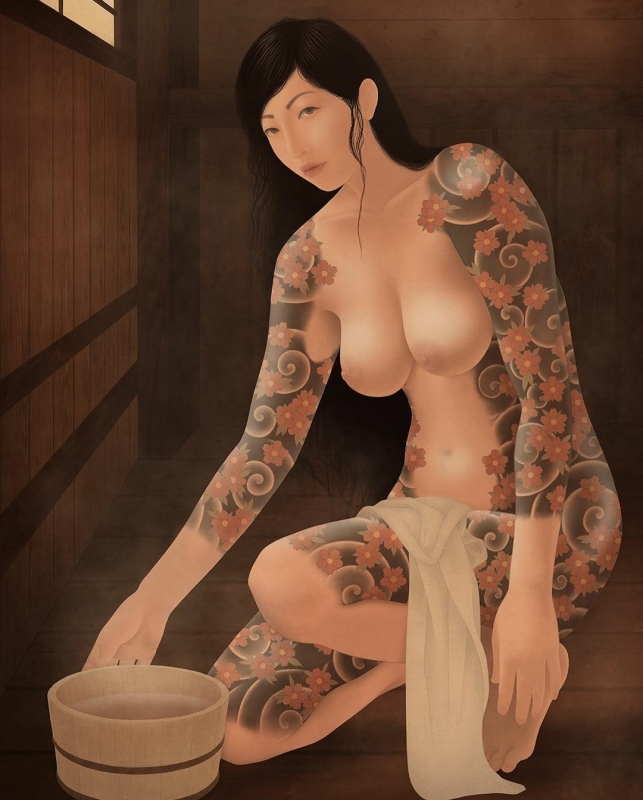 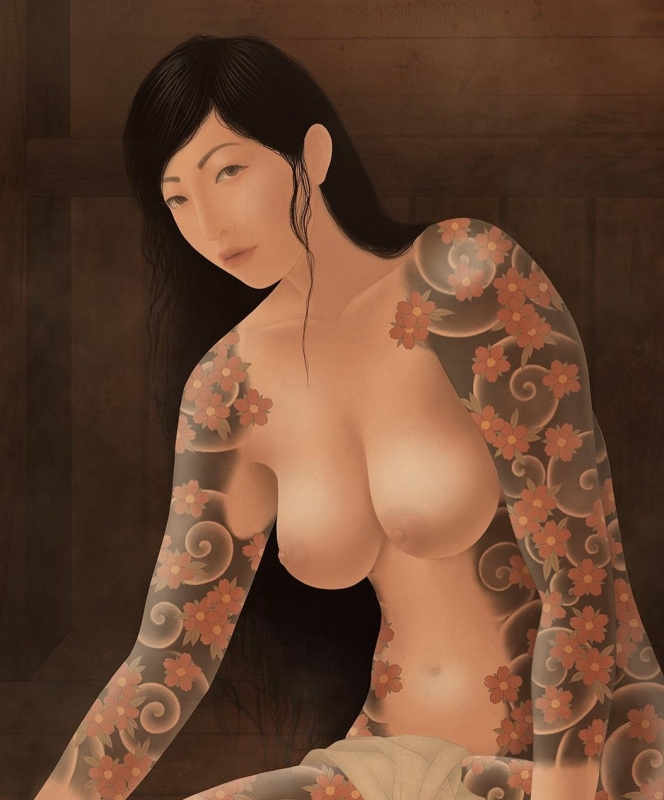 In Premium you can find an extended version of the article including more background on this tale and more artwork by the old Japanese masters.

Yuuwaku: The Temptation of a Female Ghost by Senju Shunga
15 april 2022
Place comment