Our beloved Swedish artist Senju Shunga (1968) has not been idle in the last months. The painter explored new creative and spiritual paths during his incessant journey through ancient Japanese culture and mythology. Only the first and the last painting include references to European sources such as Shakespeare’s Hamlet, Millais’ masterpiece Ophelia and Art Nouveau.

The new work is less explicit, more suggestive, than his paintings from a couple of years ago. The beauty licking the vagina-shaped peach and the lesbian females passionately tongue-kissing are the most daring in that regard. Nevertheless, his art has lost nothing of its mysterious sensuality. The painting entitled ‘Fuji‘ (Fig.3) is a nice example of this; the tied woman’s gaze is dominant, despite her situation she exudes control.

It’s nice to see the artist’s evolution who seems to have detached himself a bit more from shunga art. On the other hand, the old Japanese cultural theme is still decisive in his work. For instance, he pays increasingly more attention to the detailed clothing (Fig.4, 10 and 11) and traditional Japanese objects.

Below you can enjoy a collection of 11 new works…

The character Ophelia, from Shakespeare’s classic play Hamlet, and John Everett Millais masterful painting (Fig.1b) based on the play were the inspiration for this painting. On his Instagram account Senju tells that he has always been drawn to melancholic paintings and Millais’ Ophelia was love at first sight.

The artist shows here is minimalist mastery. The portrayed female is floating in a pound but he didn’t paint water. A simple and clear division between above and below, and the viewers fill in the remainder with their imagination. Although his vision was clear and the sketch came easy, the making of the painting was not without obstacles, for example, he spent numerous hours studying photographs of long hair floating in the water and at first didn’t know where to start. 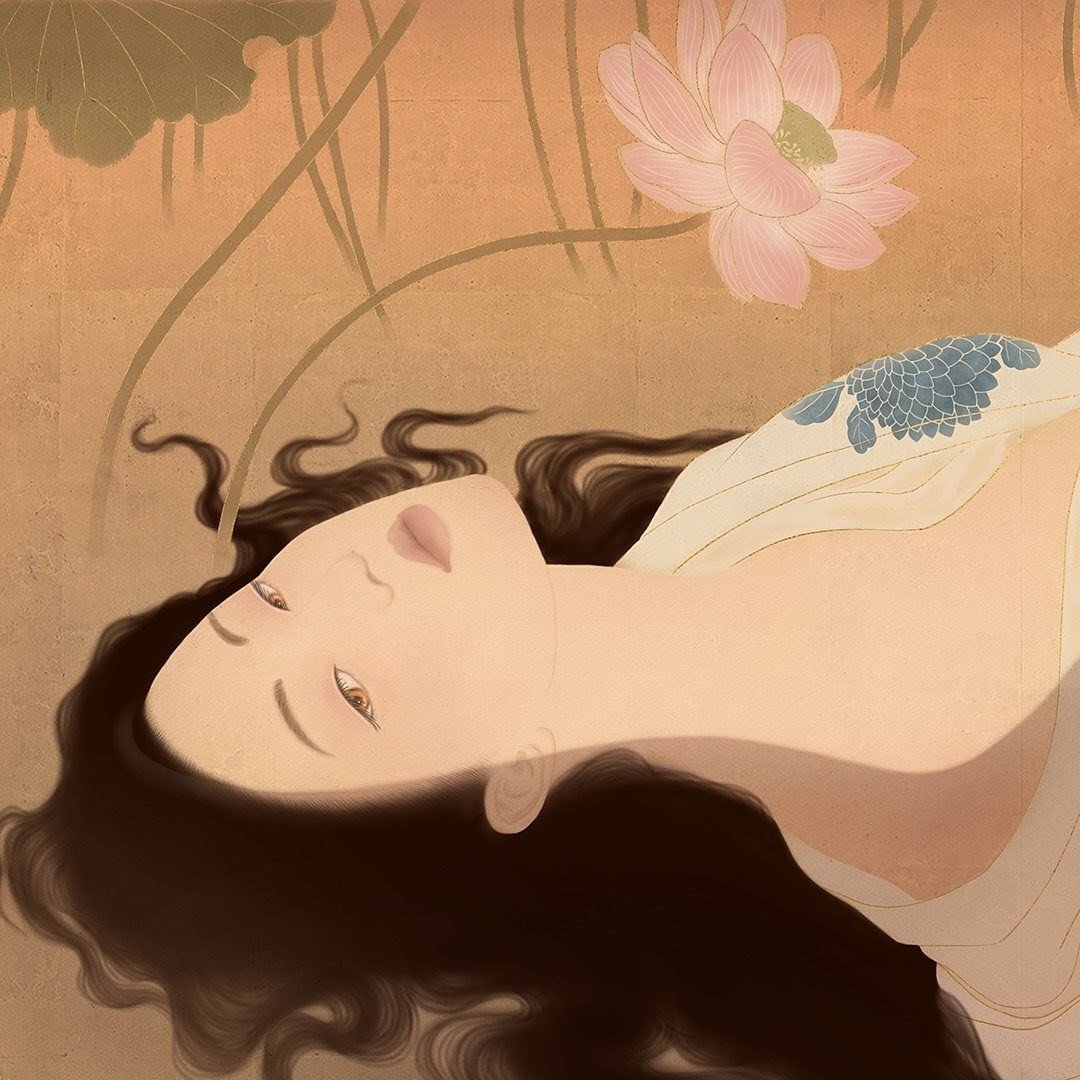 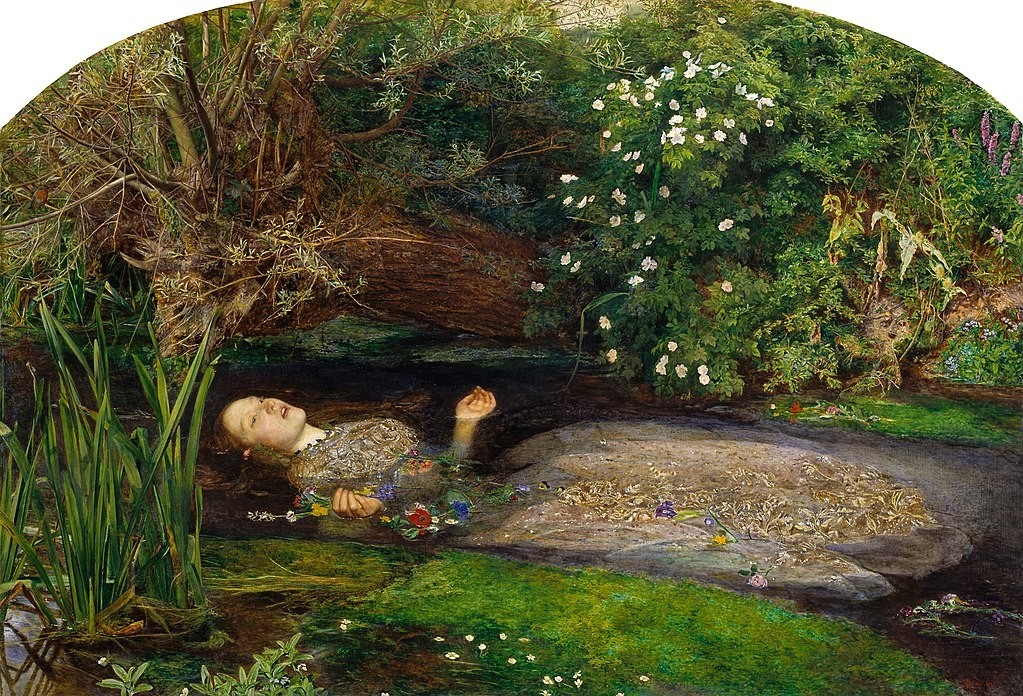 Millais’ Ophelia encountered a mixed response when first exhibited at the Royal Academy, but has since been praised as one of the paramount works of the mid-nineteenth century for its beauty, its accurate portrayal of a natural landscape, and its influence on artists from John William Waterhouse and Salvador Dalí to Peter Blake and Ed Ruscha.

The painting portrays Ophelia singing while floating in a pond a moment before she drowns. The scene is described in Act IV, Scene VII of Hamlet in a speech by Queen Gertrude. 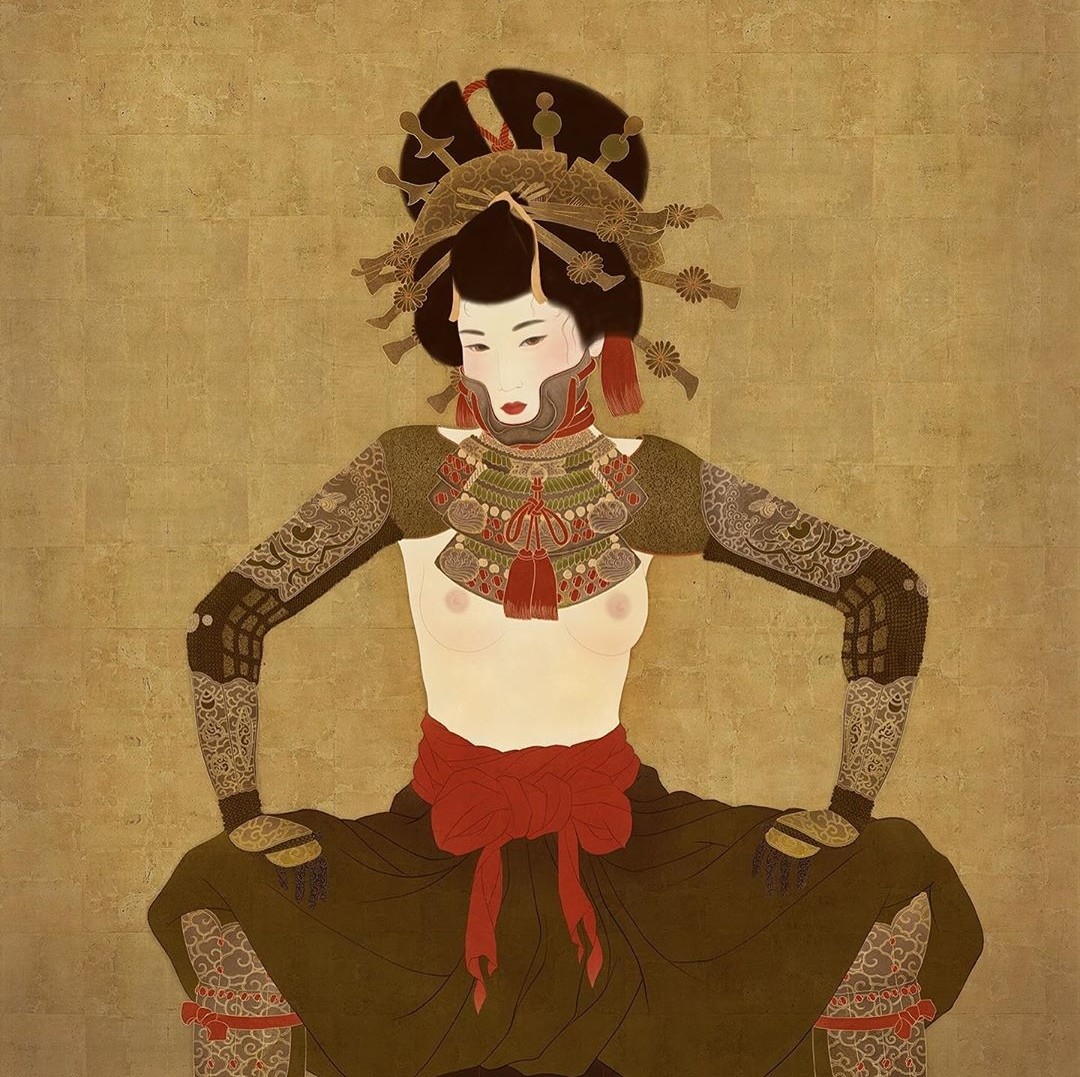 An ode to the courtesans of the Yoshiwara pleasure quarters in Edo (former Tokyo), who had to endure hardships such as abuse, oppression and venereal diseases. Despite The samurai armor the woman is wearing symbolizes their mental defense. Over the years, Senju experimented with various ways of depicting these women dressed in samurai outfit and this is his “firstborn”. This painting inspired the Russian freelance artist Polina Trofimova to produce a 3D figurine (Fig.2a and b). 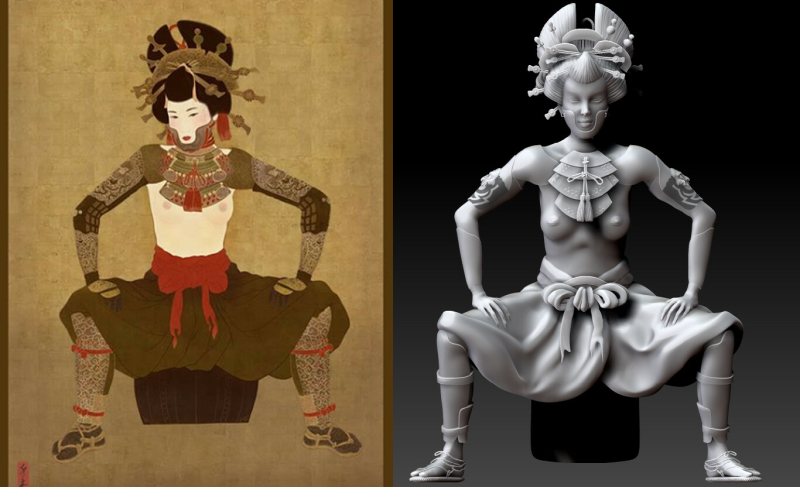 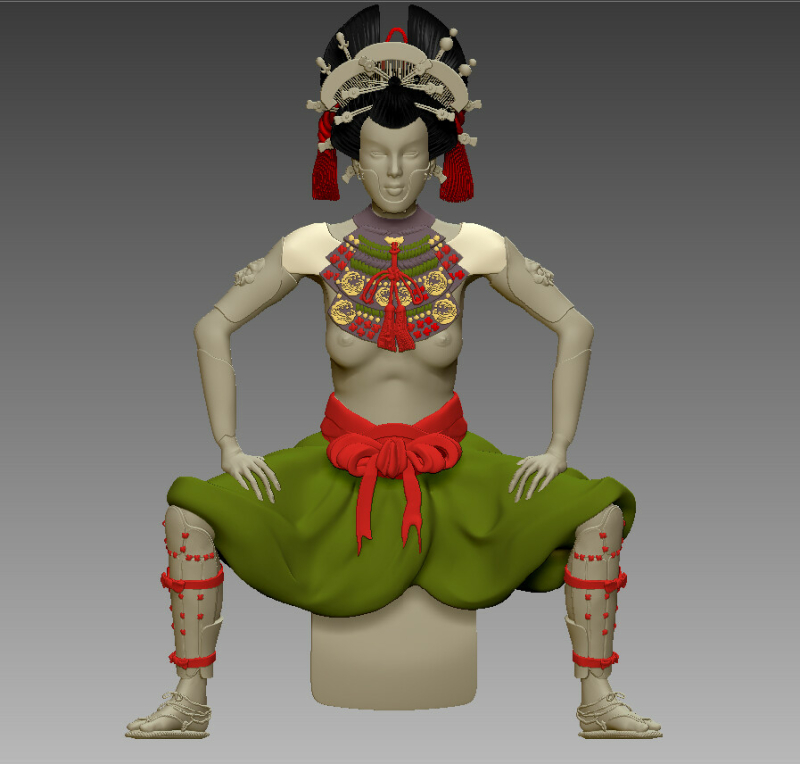 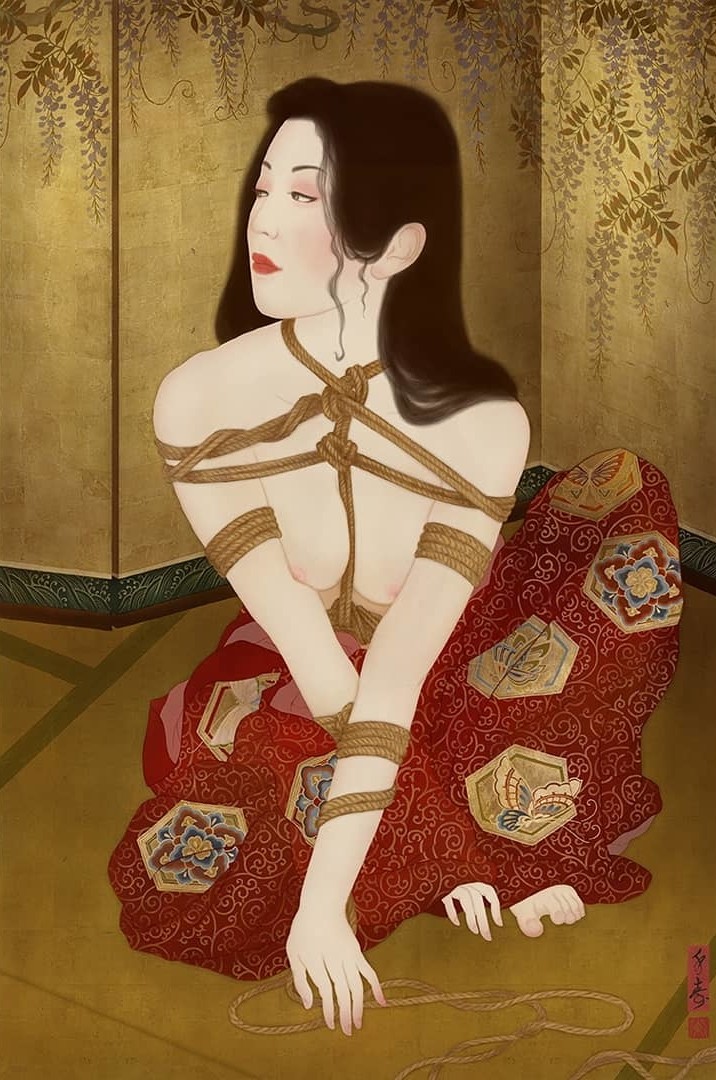 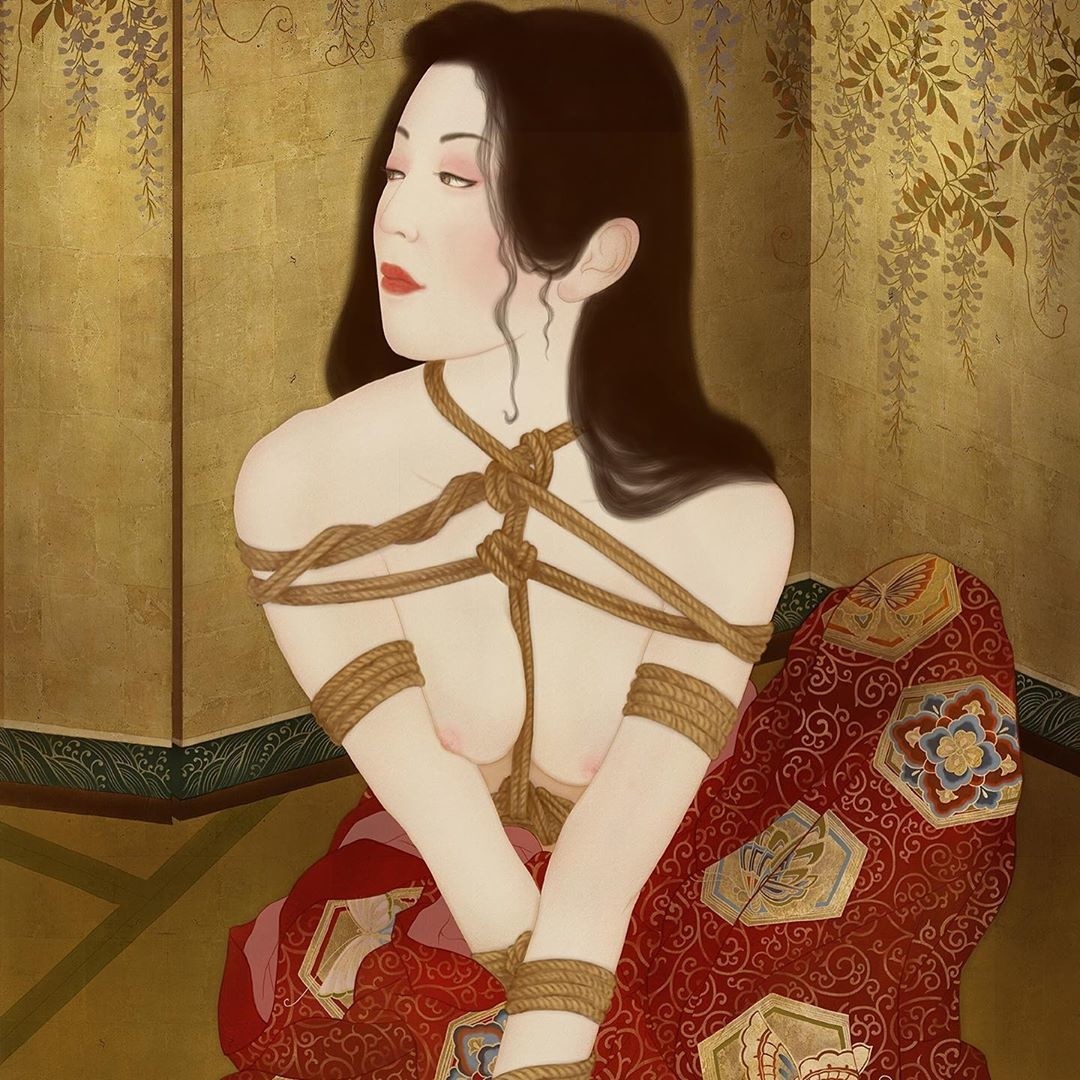 This “bondage” piece is the personal favorite of the artist himself. It’s a mystery to him how he was able to paint it. It was the struggle that opened him up and led him to new paths. From the moment Senju started with painting, he wanted to make works that included the Japanese form of rope play (Kinbaku or Shibari). At first, he was reluctant because he didn’t want to dishonor Kinbaku practitioners. It were the bondage photographs of the acclaimed Japanese artist Nobuyoshi Araki (1940) that influenced him over the years and sparked his imagination. ‘Fuji (Wisteria)‘ was a commission from Knot Lounge that was part of an charity exhibition in Lisbon last February 2020. 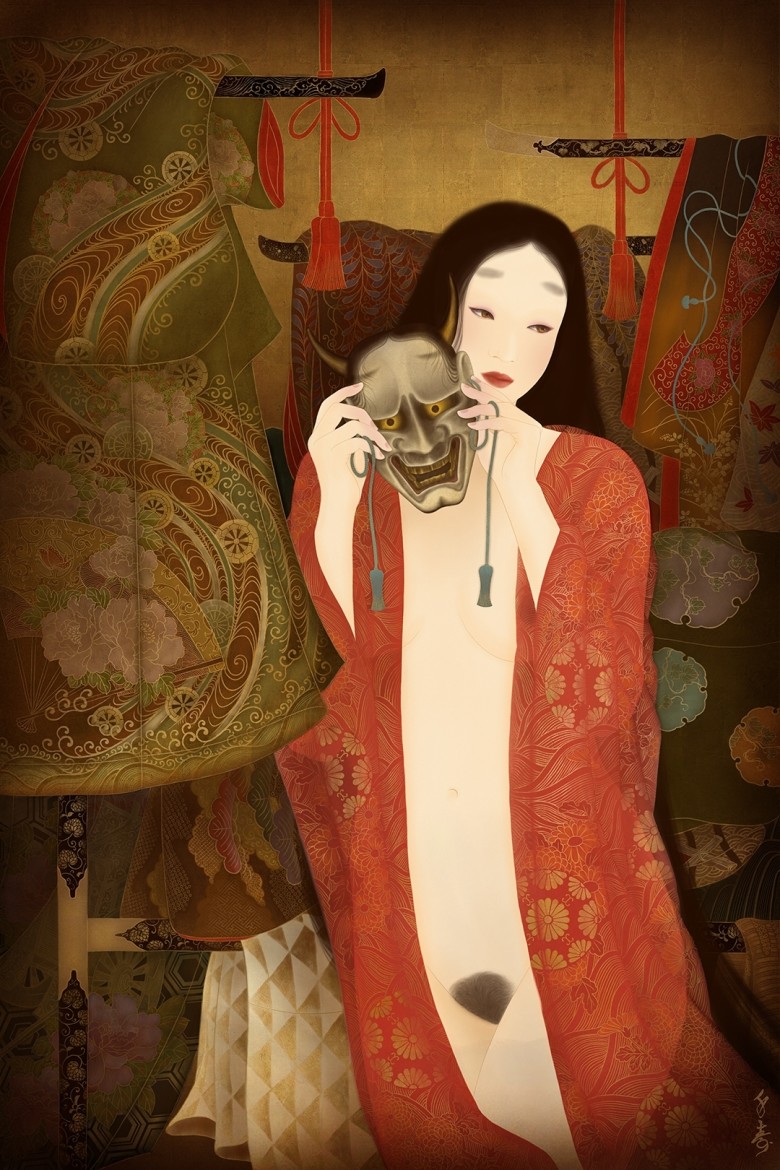 Possessed by a Phantom

The theme and title of the Aoi no Ue piece are borrowed from the Japanese noh play with the same title. The story is about Lady Aoi, the formal wife of Hikaru Genji and a daughter of the Sadaijin (the Senior Minister of State) family, who has been possessed by a phantom and seriously ill. The themes that attracted Senju are the agony of the human soul and the ensuing release from mental and spiritual torment through compassion and recognition.

The Hannya mask the court lady is holding in her hands represents a woman suffering the pains of betrayal, envy and fury. It is used to show immense internal suffering. Not, as is commonly thought, a demon in itself but rather the face of human emotional suffering. 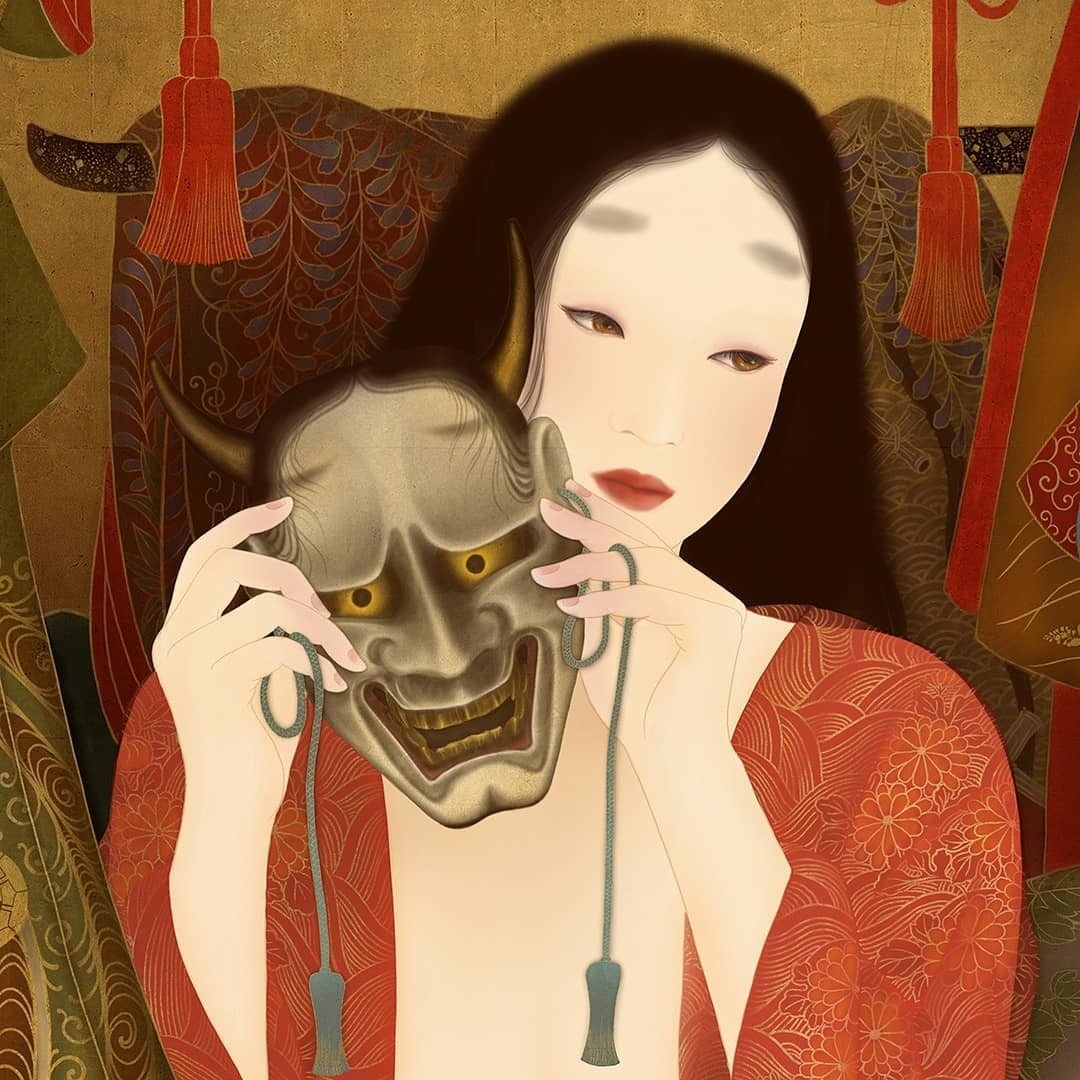 Another key element in this piece are the sumptuously decorated kimono hanging over a woorden rack referring to Tagasode (“Whose Sleeves?”), a suggestive phrase coming from classical love poetry that invites the viewer to speculate over who owns these magnificent robes. 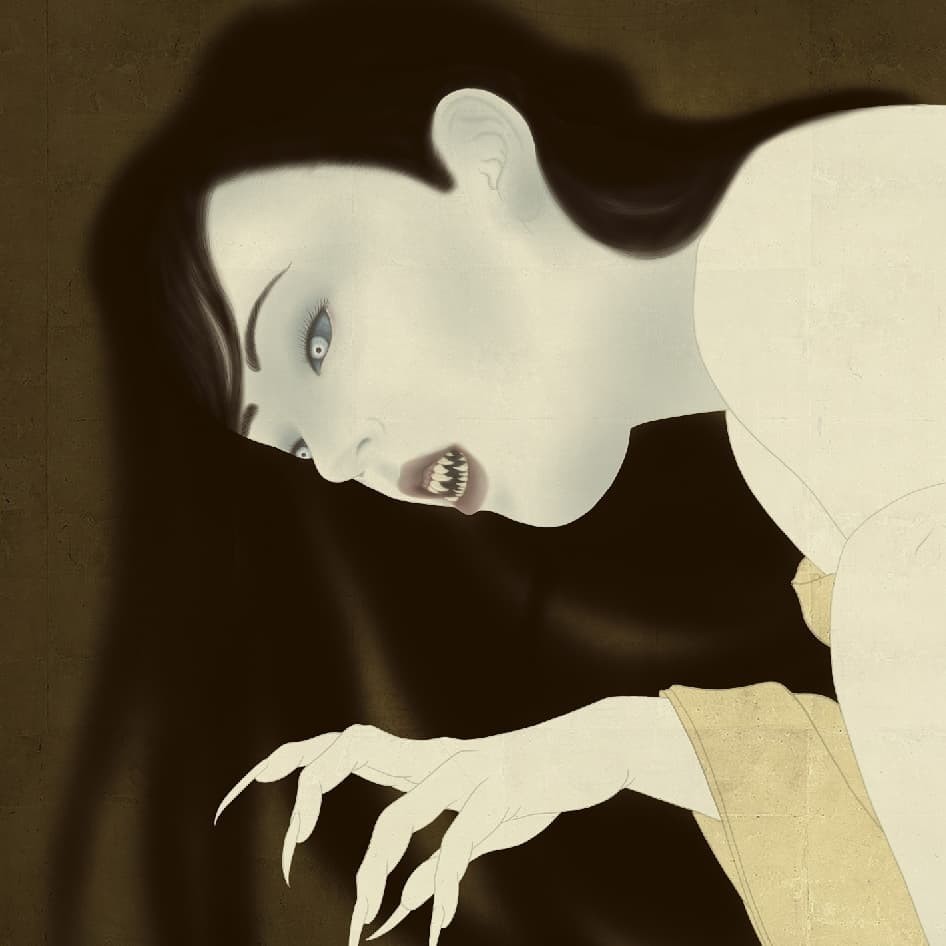 This unfinished and still untitled ghost painting is Senju’s third attempt on this specific subject. On his Instagram account her remarks, ‘The two earlier ones faded after initial success but this one seems to hold out all the way. It’s strange and somewhat comical how difficult it is to paint sometimes. This vision one has of the finished work seems clear as the water of a mountain crystal lake, still it becomes muddied, contaminated and utterly lost on the way.’

This piece is a new more subtle version of another one Senju made in 2017 depicting a young bald-headed female monk penetrated by a lotus bud. The lotus flower is an elemental part of Buddhism and represents purity of the body, speech and mind, as if floating above the murky waters of material attachment and physical desire. 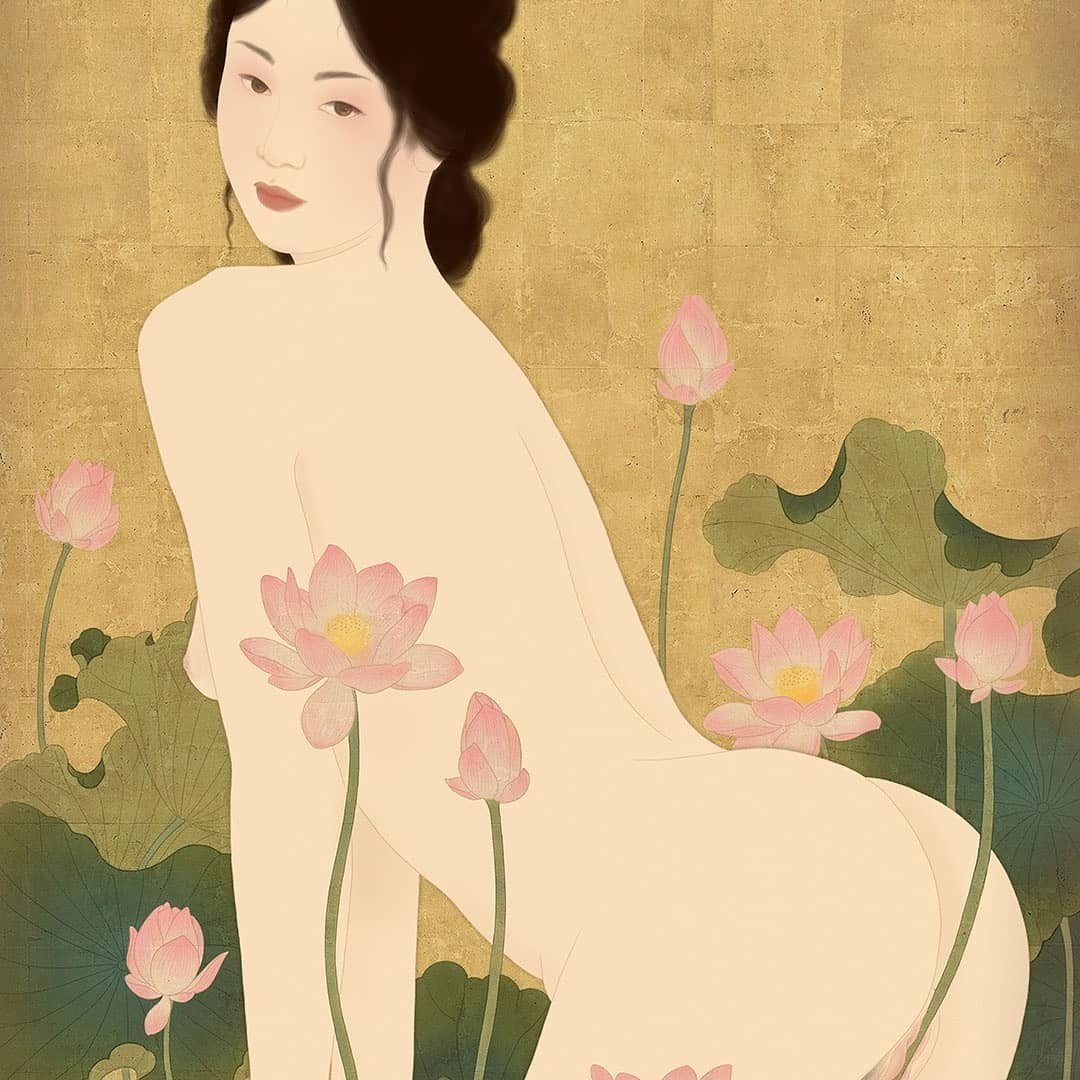 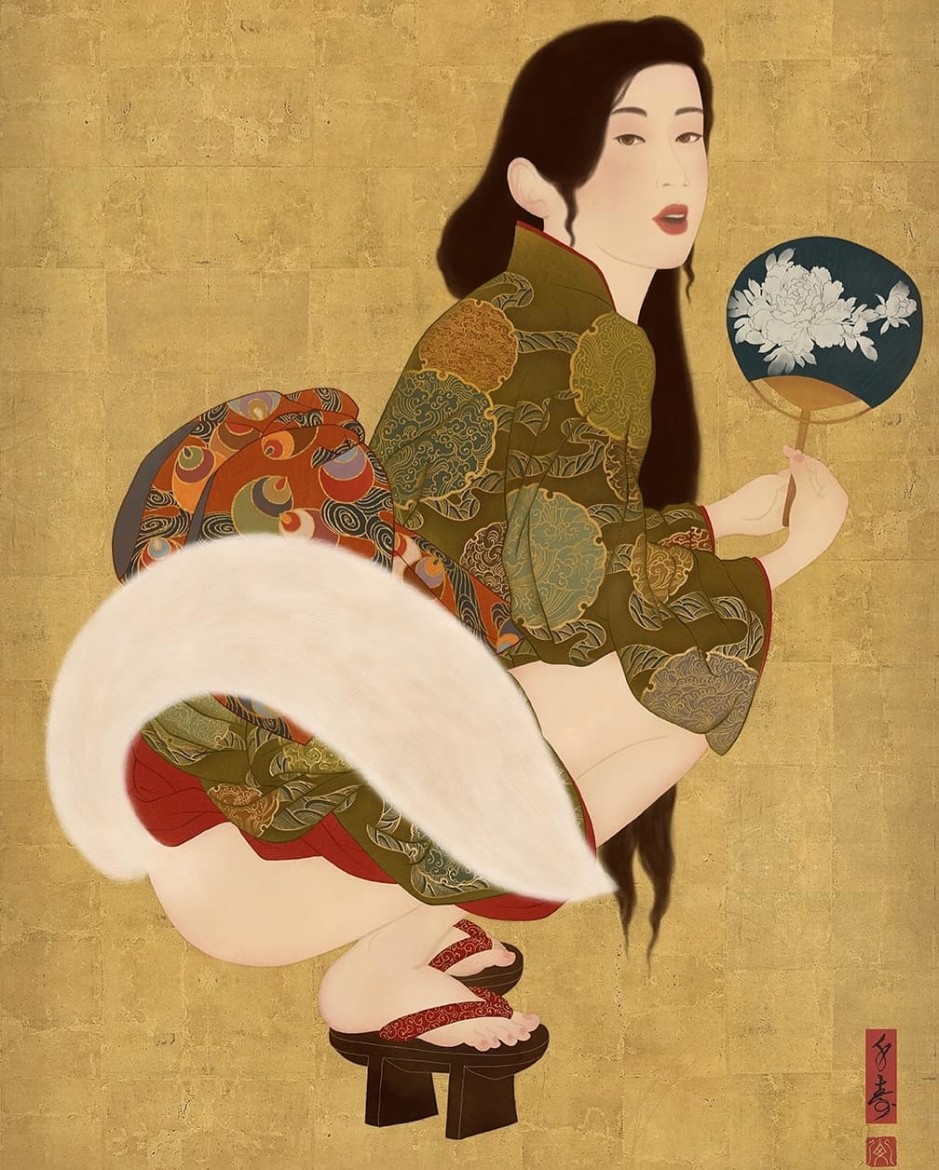 Another recurring theme in the work of the artist is kitsune (fox spirits). The title of this painting is Byakko which can be translated as ‘White fox’. In Japanese mythology the fox is a magical being, the messenger of Inari, the Shinto deity of prosperity, tea, agriculture (especially rice), industry, and smithing. Its power depends on the number of tails (the ones with nine tails are the most powerful) and if you mistreat this vigorous animal it will get back to you with a vengeance. This work was a commission for a book project. 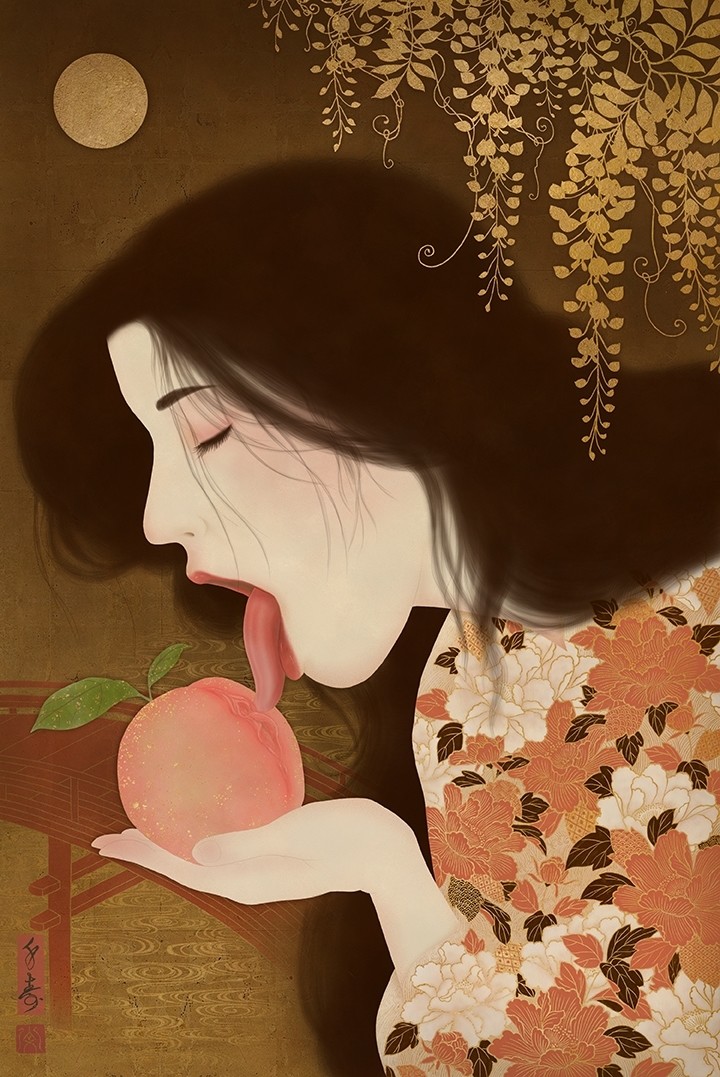 A cherished composition of Senju with the female in medium close-up seen sideways while licking fruits, flowers or a vagina. This particular piece was created after the artist’s participation to an exhibition in Tokyo to fight off a possible artist’s block. It worked like magic and he made it faster than average (within a week). The painting refers to the “peach season”. 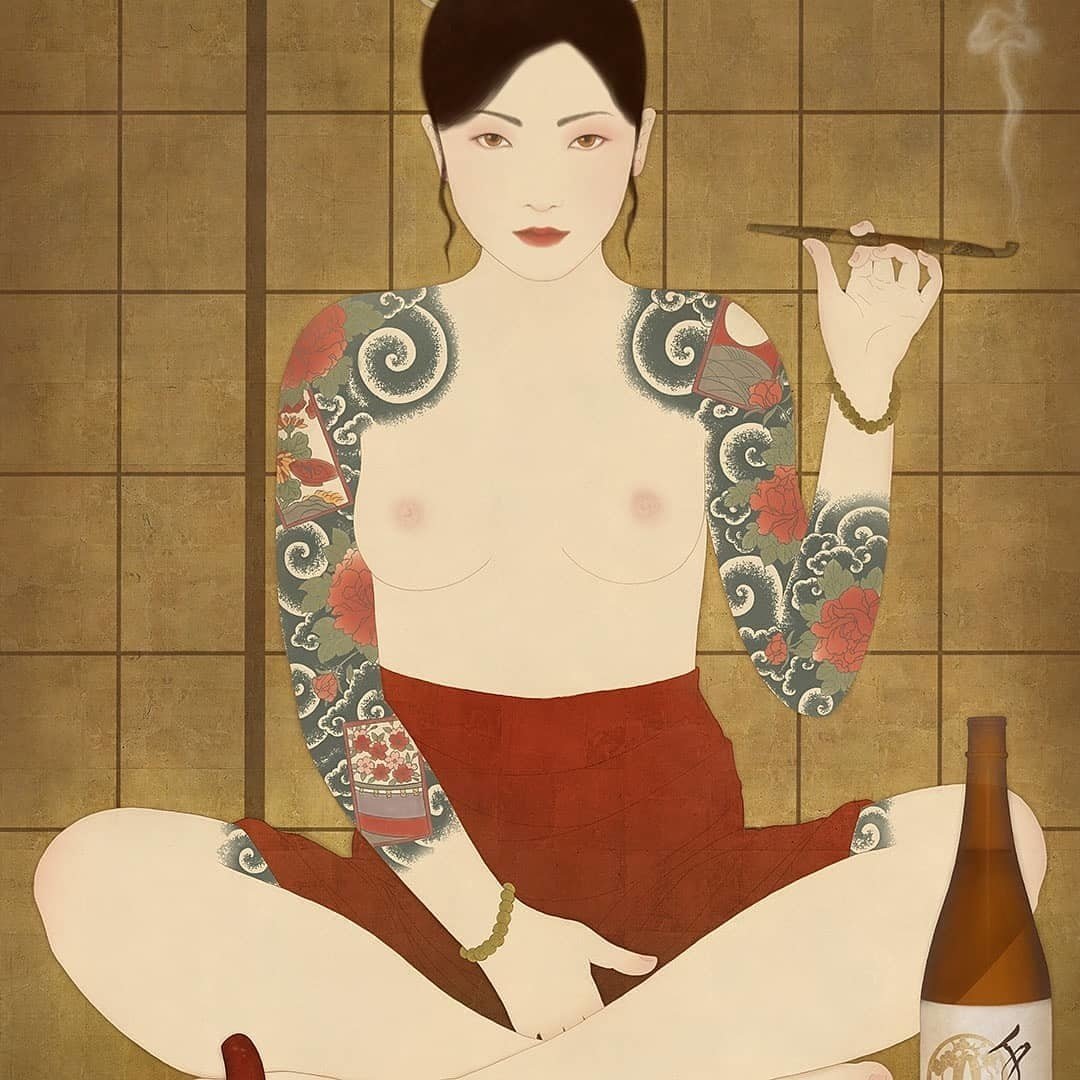 The half-naked tattooed beauty that looks at us confidently is none other Oryu from the legendary late 1960’s Japanese Yakuza movie “Hibotan Bakuto” (Red Peony Gambler” (Fig.9a). Bakuto were nomadic gamblers active in Japan from the 18th century to the mid-20th century. They were one of two forerunners (the other being tekiya, or peddlers) of what would later become the modern Japanese organized crime syndicates called yakuza.

In this painting Senju used his knowledge and experience in designing and producing Irezumi (traditional Japanese tattoo). The tattoos on her arms depict, besides the red peonies and swirling clouds, three Hanafuda cards. The names of the cards spell out Ya-ku-za (meaning “8-9-3″—which is a losing hand in the Hanafuda card game) it’s theory that this is were the term Yakuza comes from. 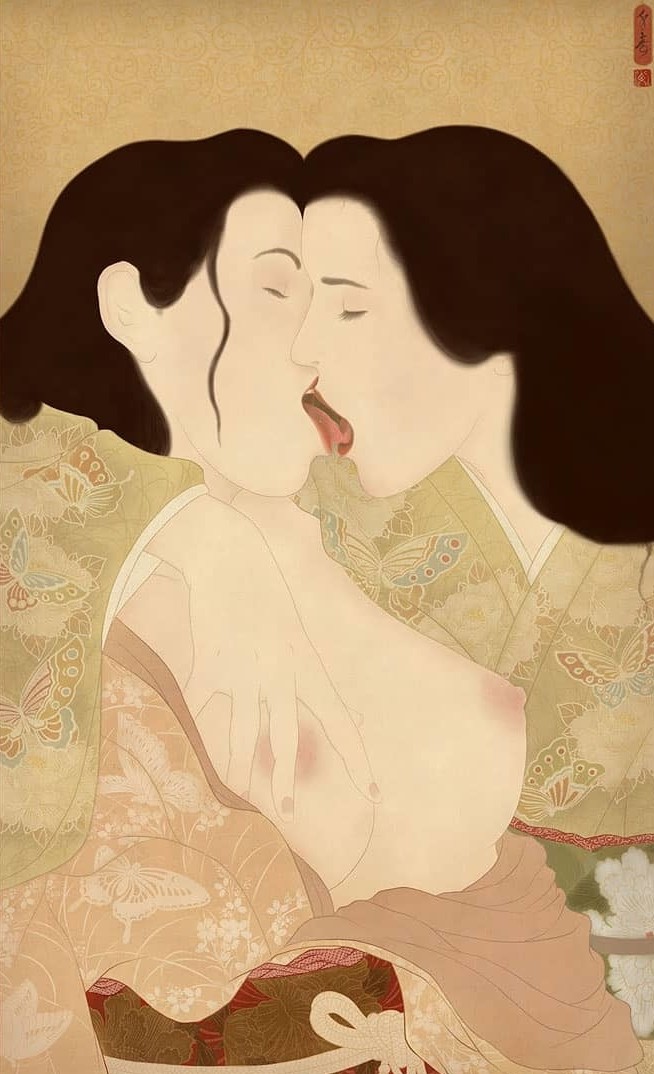 The title Chou (Butterfly) alludes to freeing oneself from the shackles, escaping the cocoon and becoming something beautiful. It also refers to the artist’s laborious work process. Nowadays, it takes Senju about 100 hours to create a new painting from start to finish. Longer than in the past. He has so many ideas to explore that it is quite easy to stray off from the original idea. Often he ends up lost and in despair, but sometimes he stumbles upon a treasure trove of jewelry. Then all is forgotten and one hundred hours seems like merely an afternoon. 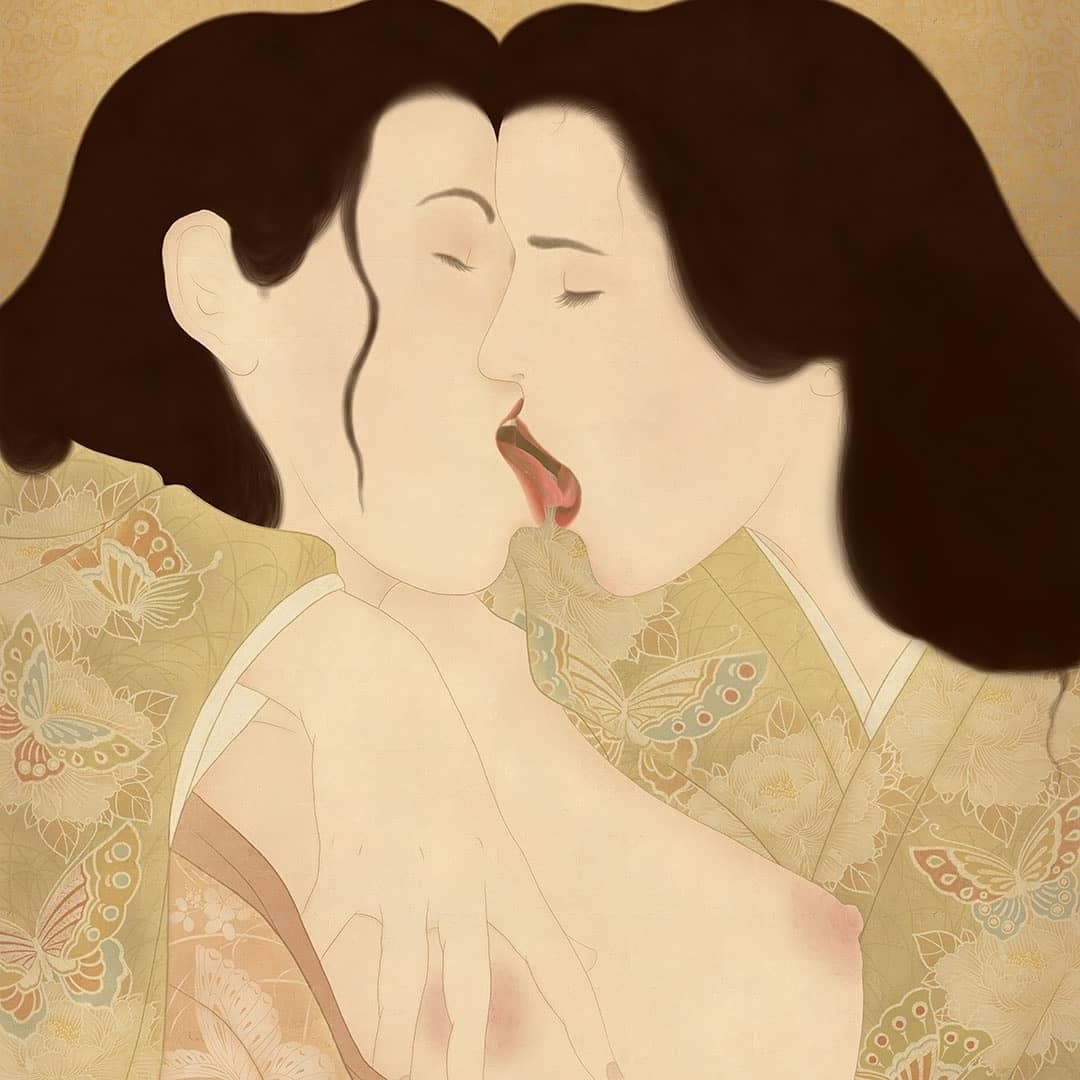 A painting that was created accidentally. At first, Senju wanted to paint it black and call it ‘kuro‘ but after working at it for many hours, it turned out to be red. Presumably, his impulses took over and the red color became apparent. Hence the title Akane, that refers to the traditional Japanese color Akane iro which is the beautiful red used in this painting.

You can check out a profound interview with Senju Shunga by clicking HERE….!!

You can check out interesting offers on some of Senju’s limited prints in his webshop (we are not affiliates)..!!

Amai Momo (Fig.8) and Chou (Fig.10) are my favorites! What is your favorite Senju painting of the above? Leave your reaction in the comment box below….!!