The three covers of the books form a triptych (Fig.22) depicting a gathering of three courtesans who play a part in the 22 designs inside the books. Some of the illustrations are drawn in a different, more comical style (Fig.2, 9 and 21).

Although the designs in the booklets do not display the most innovative compositions, they do have a certain charm and include some fascinating anatomical close-ups. 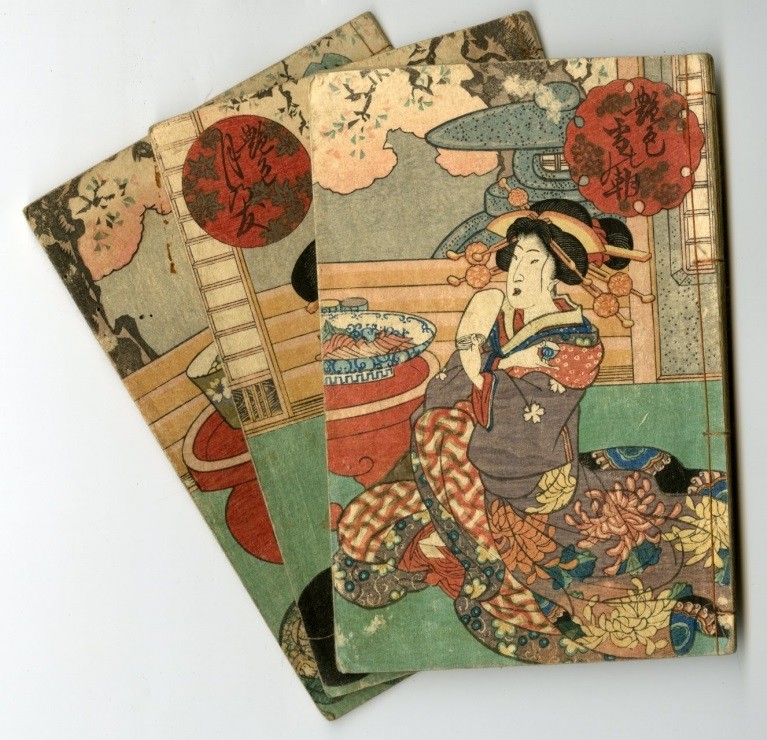 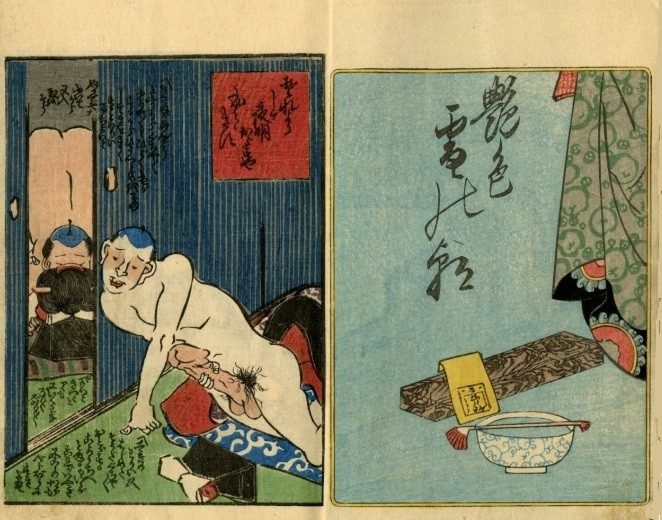 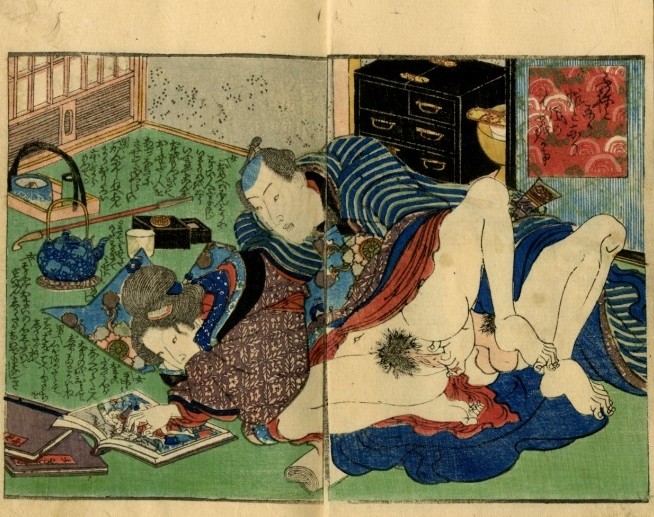 Fig.4. ‘A focused intimate couple are looking for sensual instructions in a shunga book ‘ 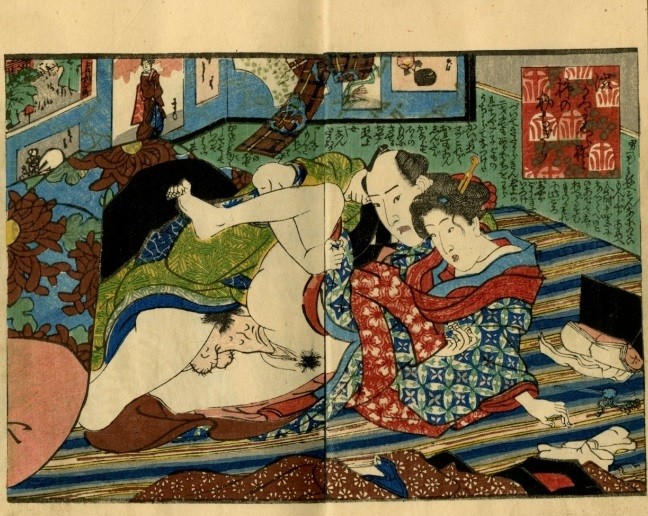 Fig.5. ‘A mature male makes love to a young inexperienced geisha. On the screen in the background hang several woodblock prints (such as a landscape print and bijin-ga) ‘ 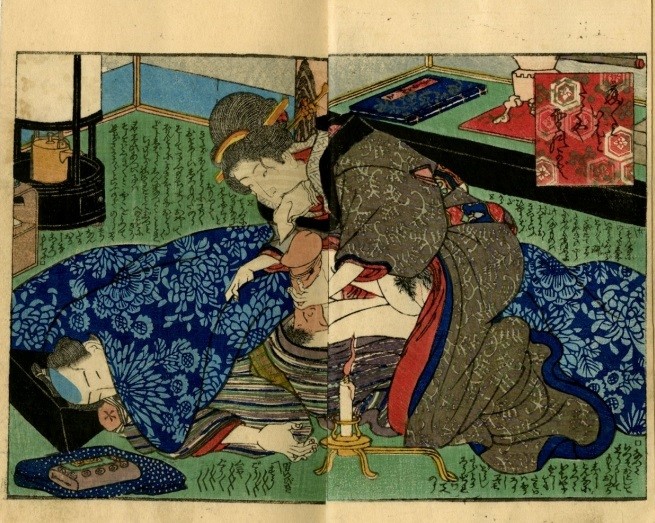 Fig.6. ‘A striking scene with a female jerking off  a sleeping man lying underneath a huge blue blanket.  She has placed the candle-stick on the floor and holds a bundle of tissues in her mouth‘ 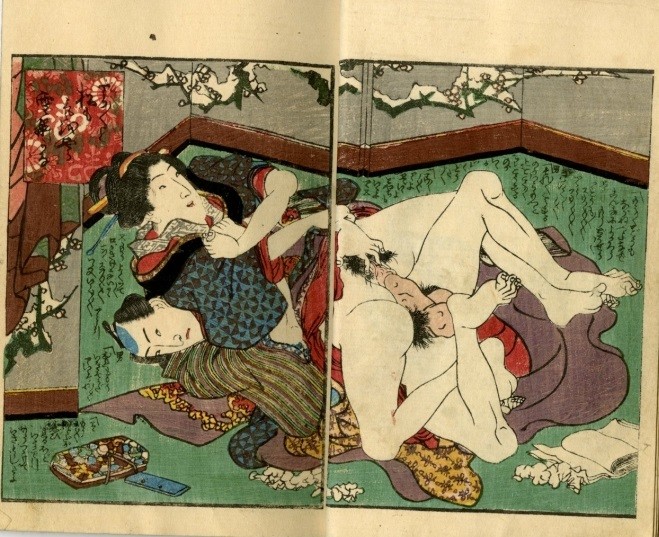 Fig.7. ‘Female lying on top of her lover who grabs her pubic hair. The folding screen surrounding them depicting a snowy branch gives the scene a special atmosphere‘ 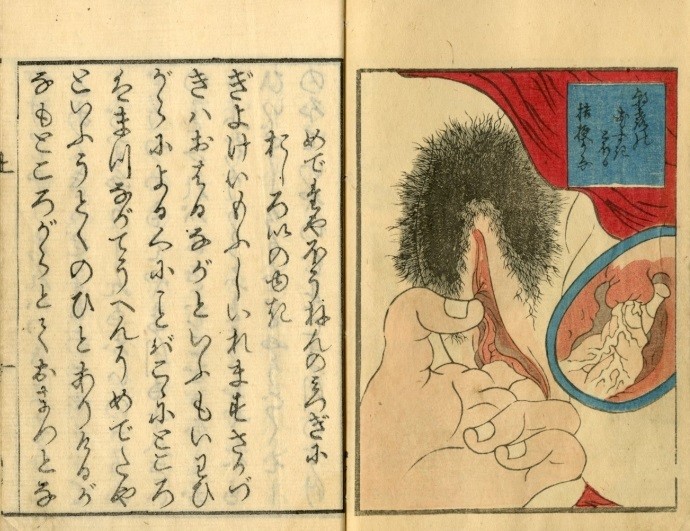 Fig.8. ‘Close-up of a male hand stimulating the vagina and clitoris. The insert depicts the two fingers inside the vagina‘ 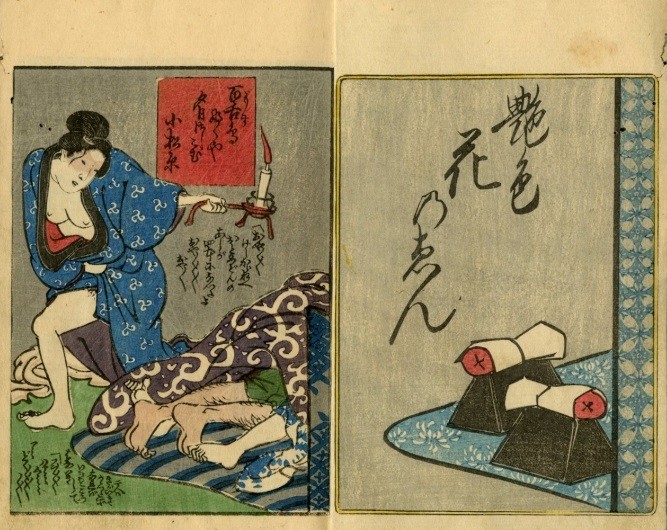 Fig.9. ‘Humorous scene with a female holding a candle-stick who discovers the legs of an intimate couple (l) and a still life of two geisha pillows (takamakura) (r)‘ 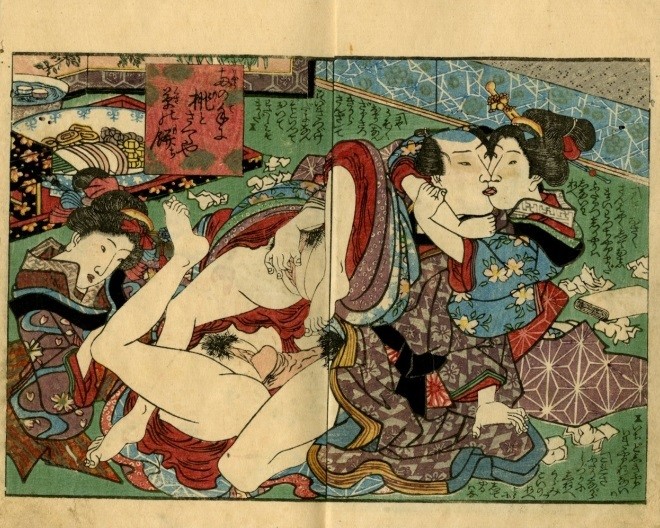 Fig.10. ‘A client is having fun with two attractive geisha and has to divide his attention in three places‘ 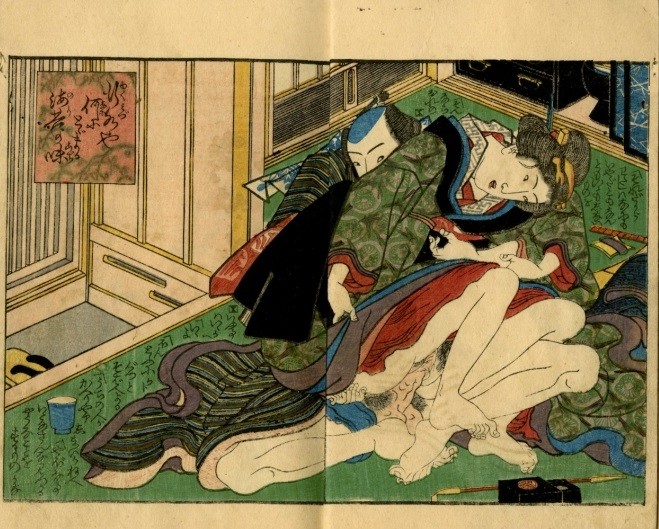 Fig.11. ‘A helpful woman lifts her kimono to give easier access to her lover ‘ Fig.12. ‘A geisha french kisses her client while holding his glans penis. The screen in the background portrays ‘Meoto iwa (aka. wedded rocks)‘ 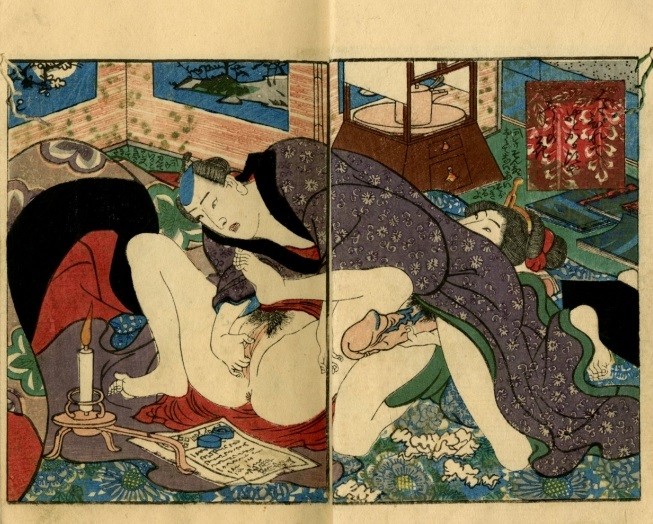 Fig.13. ‘A male lover is applying some kind of lubricant to the private parts of his partner. The lubricant  comes from the small box in front of them. He looks at the leaflet, that is lit by the candle-stick, for instructions‘ 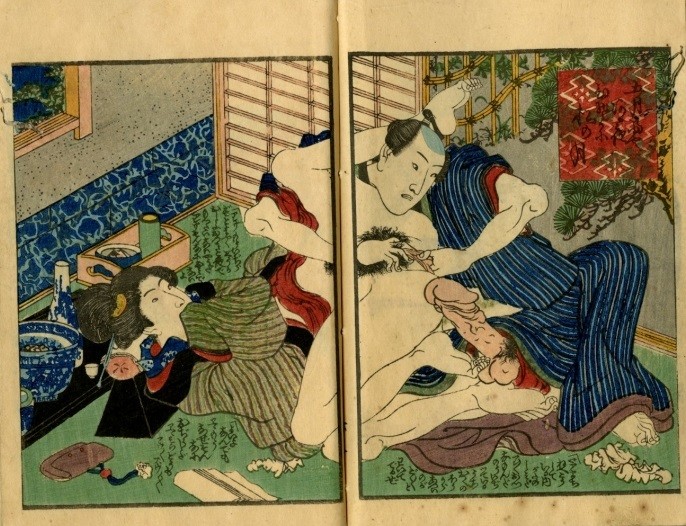 Fig.14. ‘Male caressing his lover’s private parts with both hands‘ 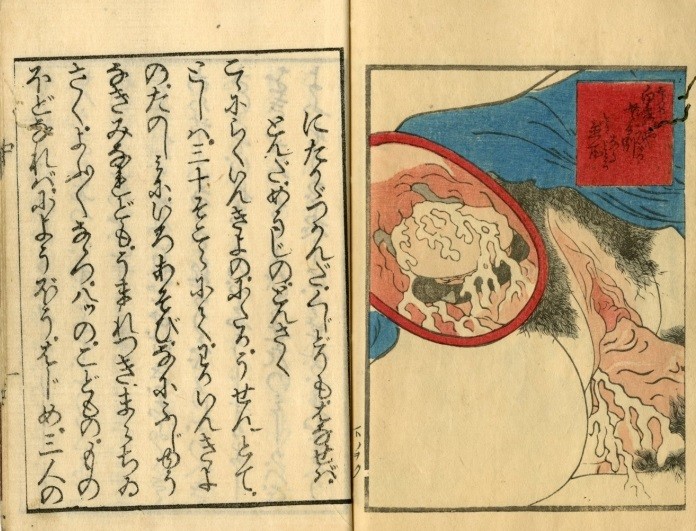 Fig.15. ‘Close-up of a penis penetrating the vagina. The insert depicts the penis sporting a ring (namako no wa) inside the vagina‘ 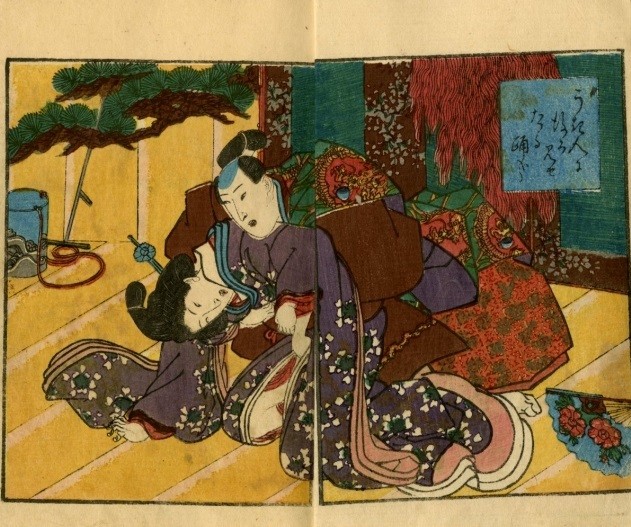 Fig.16. ‘A young aristocratic male approaches his lover from behind. Their impulsiveness is emphasized by the fan thrown to the floor that lies next to them.  The lantern standing in the left corner in the back indicates that they have searched for a secret location for their sensual needs. 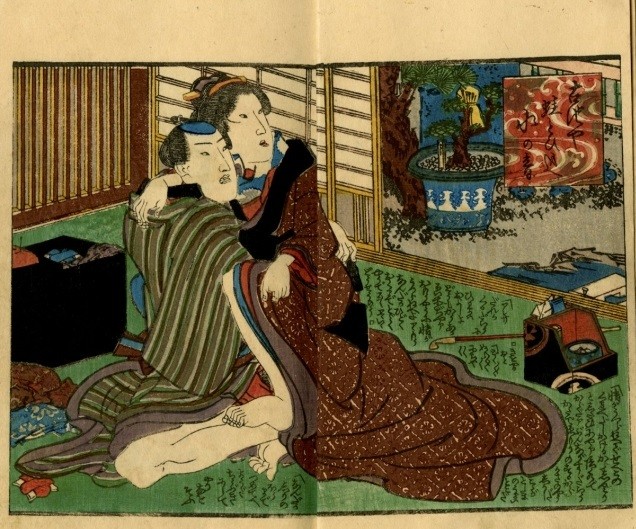 Fig.17. ‘A distracted intimate couple is looking outside when they hear something outside in the garden‘ 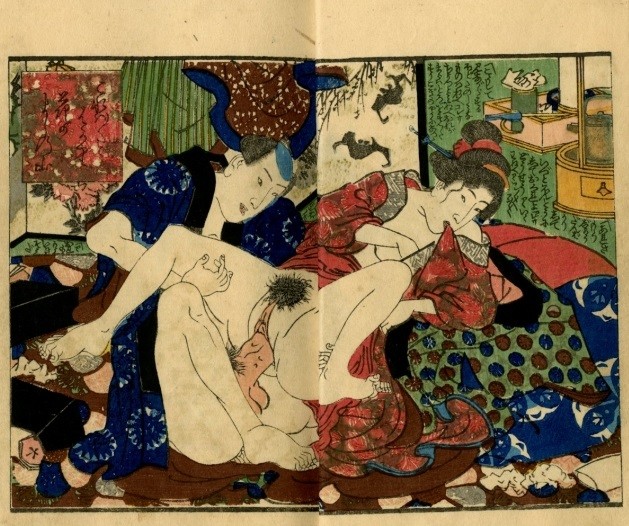 Fig.18. ‘The geisha biting the sleeve of her kimono displays her ecstatic state. The flying bats (for the Japanese a symbol of good fortune) depicted on the screen in the background are a striking detail‘ Fig.19. ‘A spontaneous intimate rendezvous on the street. In the excitement, the woman has lost one of her geta (clog). The sleeping dog is an amusing contrasting detail and a wink at the ukiyo-e master Kuniyoshi who was one of the most prominent members of the Utagawa school and who often included black and white cats.’ Fig.20. ‘Geisha embracing and kissing her favorite client. Her white legs show some transfer staining due to the use of metallic pigments‘ 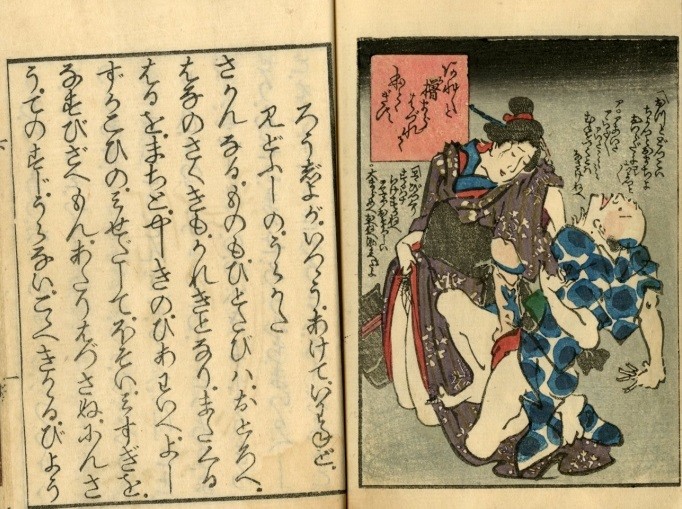 Fig.21. ‘A voluptuous woman exhibiting her private parts gets into the head of an over-excited man with a huge erection‘ 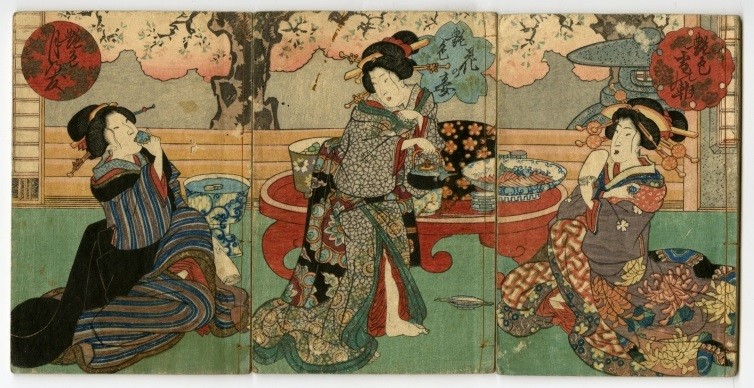 Fig.22. ‘The front covers of the three books‘

What do you think about the above shunga books? Let us know your thoughts in the comment box below…!!

Thank you as always for this set of colorful pictures! Fig 2 is a later version of the print with a mosquito-net by Utamaro (https://media-01.imu.nl/storage/shungagallery.com/2236/yokohama-e-train149213-400x400.jpg). I also love similar shunga, in which some details are changed but composition is still the same, by Kuniyoshi (http://www.akantiek.com/shunga/p2143.Kuniyoshi-prints.jpg).

Thank you as always for this set of colorful pictures! Fig. 2 is a later version of the print by Utamaro from 'Ehon Takaragura' series with a https://twitter.com/search?q=%27Intimacies%20behind%20the%20mosquito%20net%27%20(c.1800)%20from%20%27Ehon%20Takaragura%27%20by%20&src=typed_query" rel="nofollow">mosquito net. I also love similar shunga, in which some details are changed (e. g. an https://www.shungagalleryshop.com/artist/kuniyoshi-utagawa/two-mosquito-nets" rel="nofollow">aroused man is replaced by a woman), but composition is still the same, by Kuniyoshi.

Thanks again for your attentiveness Darya!

Thanks Darya, it's interesting to see how these designs like that of Utamaro were the study material of later artists.

I have a book and trying to find out who the artist is. I inherited it.

Thanks Jana, if you send" rel="nofollow" target="_blank">https://shungagallery.com/contactus/">send me pictures of the illustrations in the book, I might be able to tell you more!