This composition by Gessai Gabimaru (1789-1834) represents Western men coupling with Japanese women, and is similar to other such scenes produced by Chokyosai Eiri, Keisai Eisen, and Kitagawa Utamaro.

Here, a woman from Kyoto and a Dutchman from Dejima are absorbed in their lovemaking (Fig.1). He has offered her an aphrodisiac like the Dutchman in Eisen’s A Picture Book of the Many Beautiful Ways to Mess Up.

The woman here cries out,’This Dutch aphrodisiac works as a charm! I’ll come like a fool! If I have your child, I’ll have to show off this son of a foreigner in Kyoto.’ Between a string of onomatopoeic utterances, Gabimaru attempts to imitate, albeit nonsensically, the Dutch words spoken by man during orgasm: “Kinniyou kinniyou, hekereke hekereke, gucha, gucha, gucha!”

The following scene* (Fig.2) examines the supposedly European custom of having a bowl to hand to catch vaginal secretions for medicinal use. The artist Keisai Eisen  referred to this in his Pillow Library (Makuro bunko), announcing a ‘Method For Producing the European Life-Prolonging Ointment’. 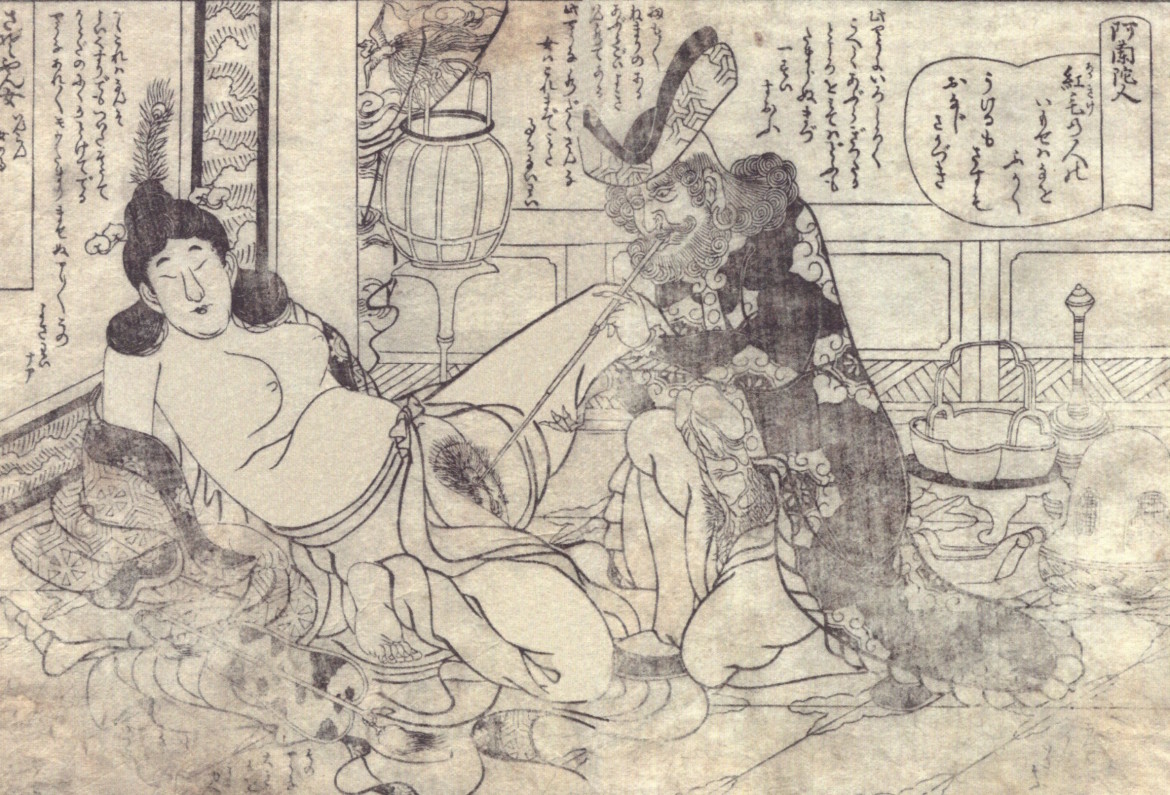 The cost of ingredients was about five small coins. He wrote: ‘…smear it onto the glans about one hour before intercourse; certainly apply it when becoming flaccid; works miracles.’

The foreigner
Plants a vase
By the woman’s behind.

Click HERE and check out how Gessai Gabimaru inspired the Betty Woodman….!!

Or HERE for some crazy encounters between Japanese geisha and various exotic Westerners…!!

If you come across other enticing examples of shunga portraying Westerners please let us know in the comment box below or through our contact form…!!

Utamaro's design from 'Hoshi tsuki yo' depicting sex of http://www.akantiek.eu/shunga/Shunga%20Utamaro%20p724.jpg" rel="nofollow">geisha and foreigner is also beautiful!

Wow, your reference book contains a lot of new images. If you have a pic of that Utamaro piece I will gladly add it to this post!

As for dutchmen, are you familiar with Shunsho's piece depicting a dutchman who's collecting vaginal fluids?

Yes, if I am right it's the one with the Dutchman sporting a moustache from Ehon kanameishi (c.1782), isn't it?

I'll send you a scan, because the series is undefined here.

Please do. I have a picture of it somewhere but can't find it at this time! There's a b&w and color version of that one.

Thank you for the correction!

Europeans are depicted with remarkably long nails… Were they really wearing such ‘manicure’?

Thanks Darya, in pre-1800 ukiyo-e print designs depicting Europeans (mainly Dutch) you often see them sporting a large hat, long hair and beard, and talon-like nails. This was mostly because of the artists lack of resources at the time. At that time, they could only observe these Red-haired Strangers from a distance and had only limited access to European art...etc.In Japan, longer finger-nails were associated with the elite, and the first Europeans known to the Japanese were the elite. In the depiction of Westerners in https://research.britishmuseum.org/research/collection_online/collection_object_details/collection_image_gallery.aspx?assetid=512221001&objectid=783184&partid=1" rel="nofollow">post-1800 prints these longer finger nails "disappeared".

Thank you for the answer, Marijn! Aristocrats didn't do common labor, so they could be supposed to wear long nails.