Tattoo art and shunga are fairly closely intertwined. The search term ‘tattoo shunga‘ in Google Images offers an extensive amount of entertaining examples of this. Upon closer examination, we can see that many contemporary tattoo artists have embraced the aesthetics of ukiyo-e and shunga. A striking example of this, is the highly-skilled Italian Pop-surrealist painter and tattoo artist Zoe Lacchei. 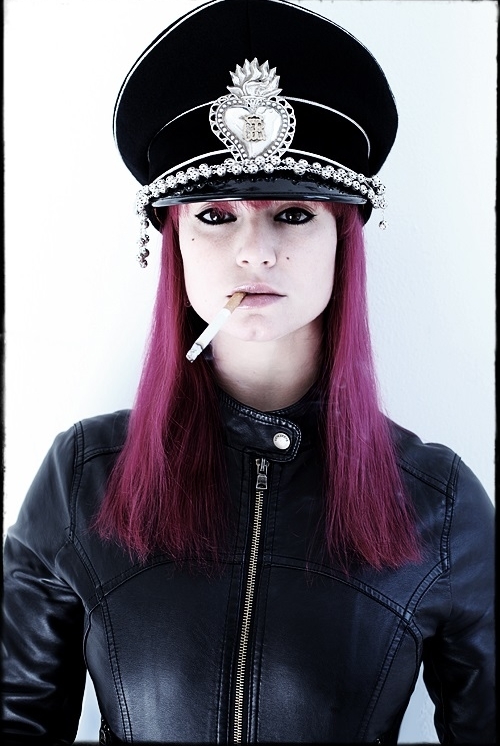 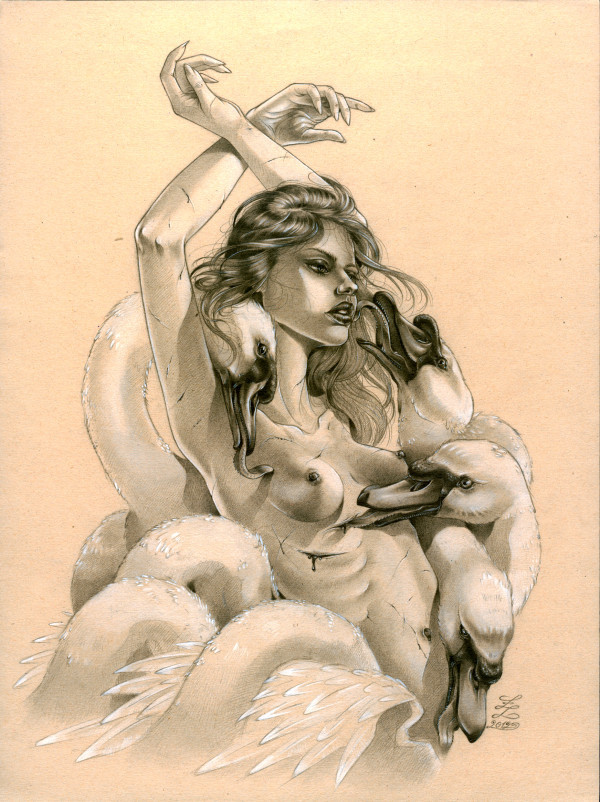 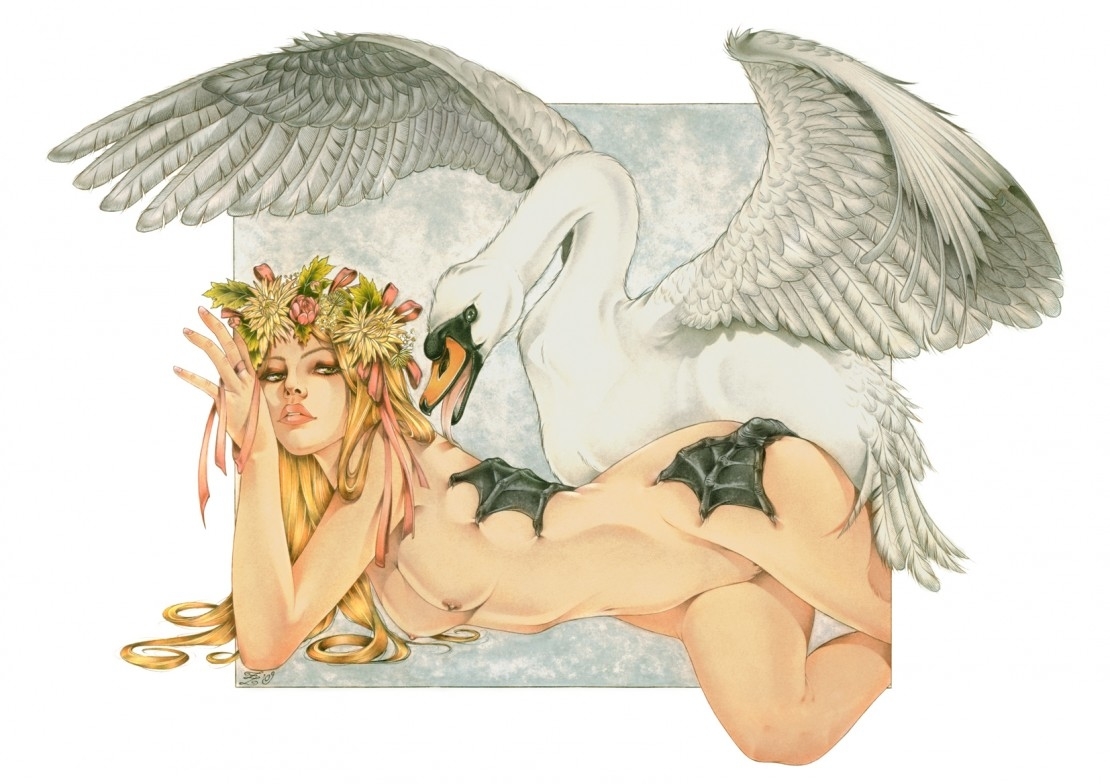 ‘Leda and the Swan‘

Her paintings and graphite drawings are predominantly inhabited by women and/or animals and characterized by strong sensual visions, an intuitive beauty that stimulates the beholder’s imagination, leaving him or her something to guess. In an earlier interview, she explains ‘It’s like a Rorschach blot test. The personality, psyche and history of ‘the observing subject’ influence their interpretation of ‘the object observed’. The fact that she worked as an adult/porn comic illustrator between 1998 and 2000 will certainly have determined her later erotically charged art. 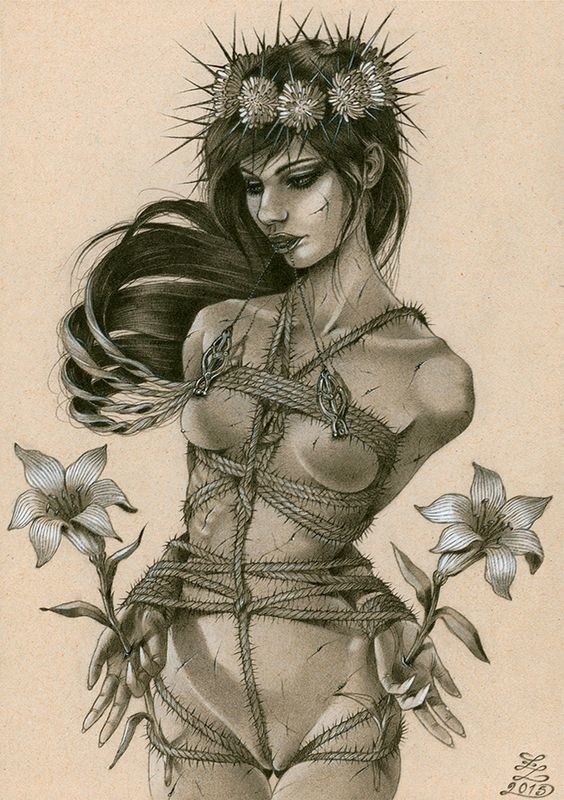 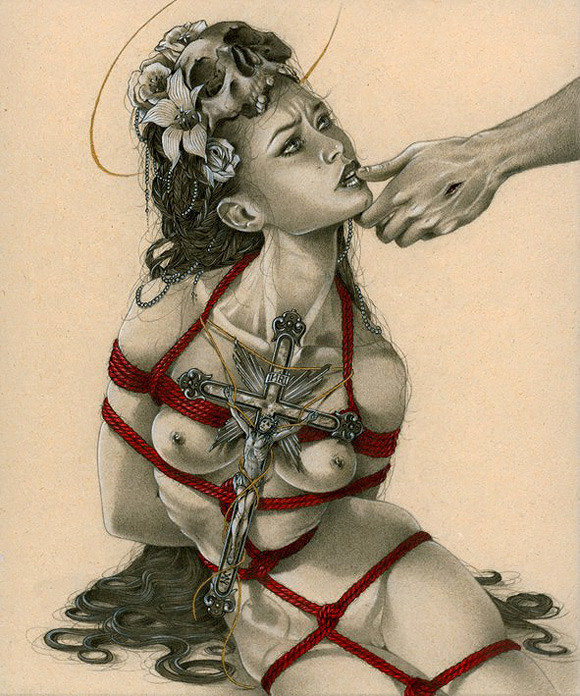 Lacchei’s influences can be found in the American Lowbrow art scene, in particular Mark Ryden, as well as in Japanese gothic art of an artist like Takato Yamamoto  But strikingly enough, Lacchei considers the filmmaker Woody Allen and the Japanese photographer Nobuyoshi Araki as her greatest role models in art. Both working in a different medium. 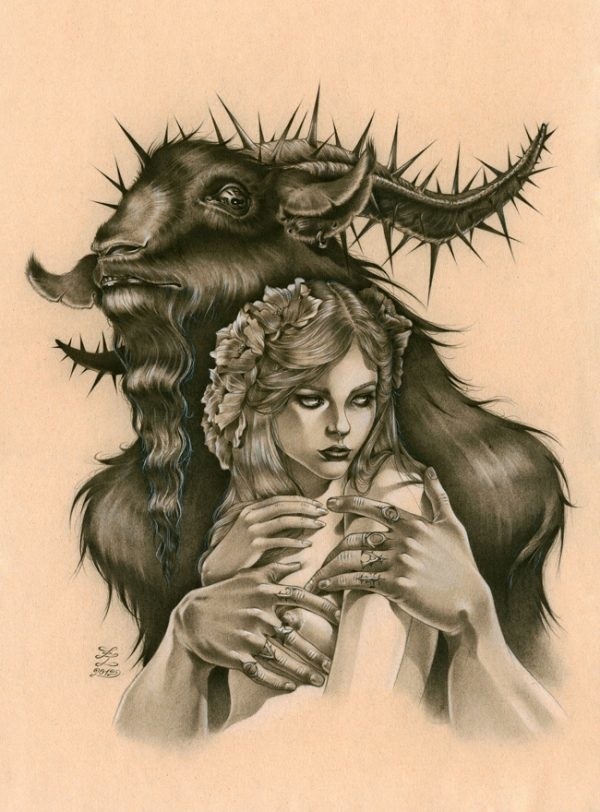 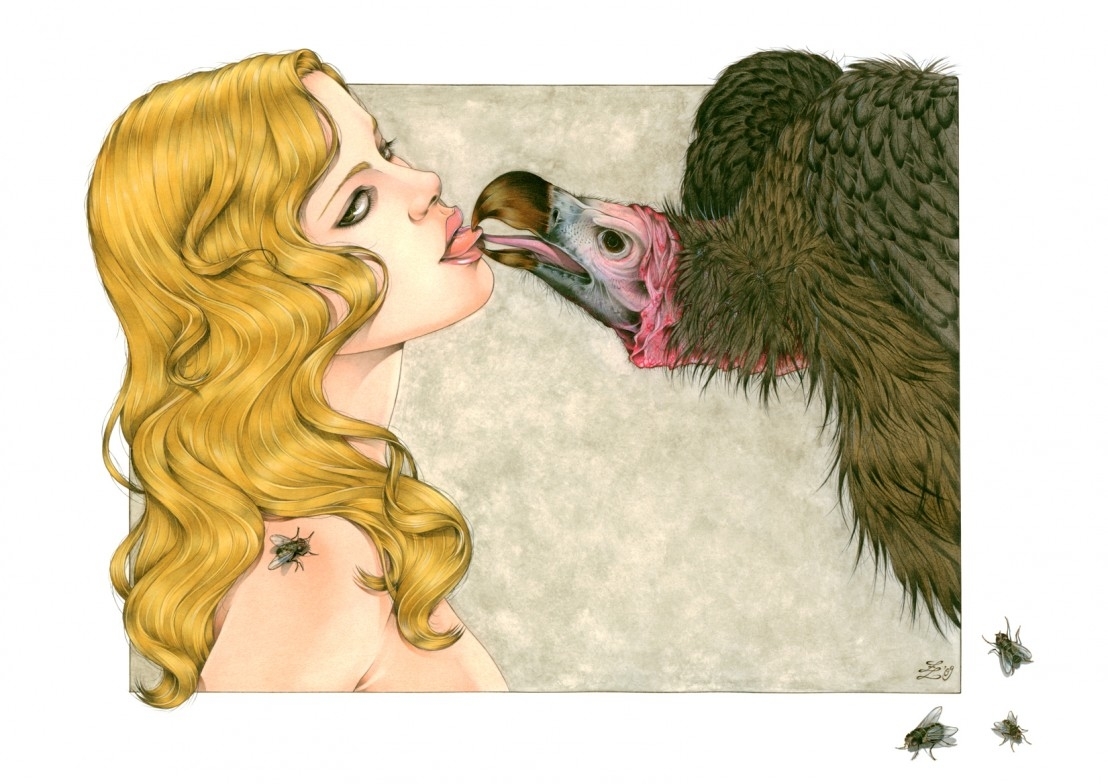 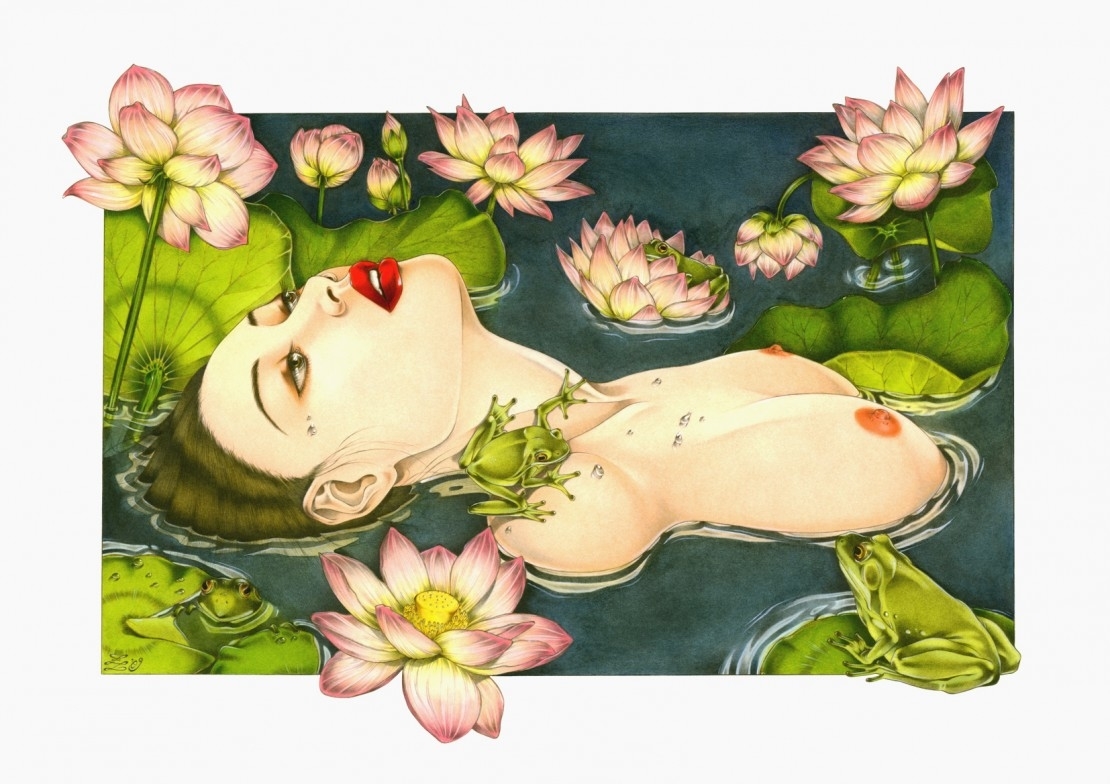 An important early supporter and fan of her work is the notorious singer and visual artist Marilyn Manson. For him, she produced thirteen paintings for his Gold Disc (Golden Age of the Grotesque) in 2004, which were collected in the original portfolio: Metamorphosis, the art of Zoe Lacchei. In 2007, she also did the artwork for Manson’s album ‘Eat me, Drink me‘. These projects were both aesthetically and financially decisive for Lacchei, and gave her creative freedom. 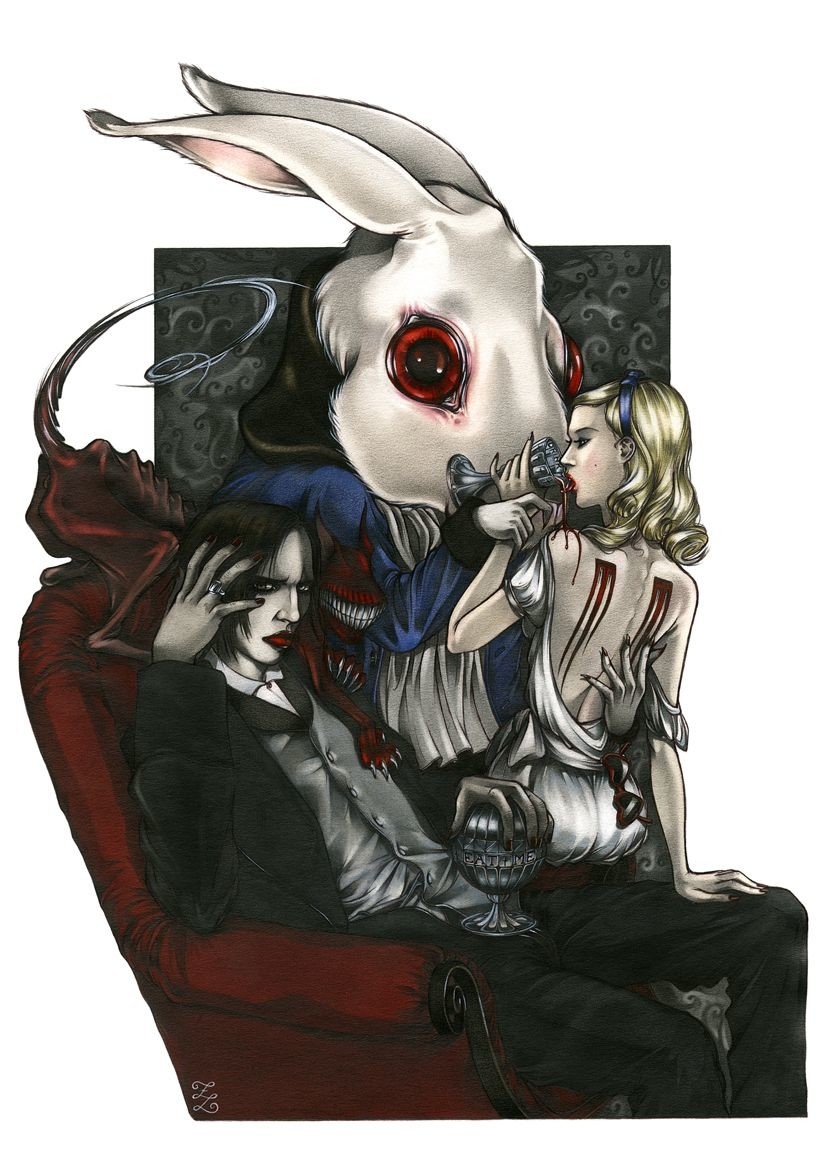 Sketches of a Dangerous Mind

Sketches of a Dangerous Mind is an ongoing project that she started in 2012, after coming out from depression. The earlier paintings in this series clearly represent her state of mind at the time by the omitting of colors. 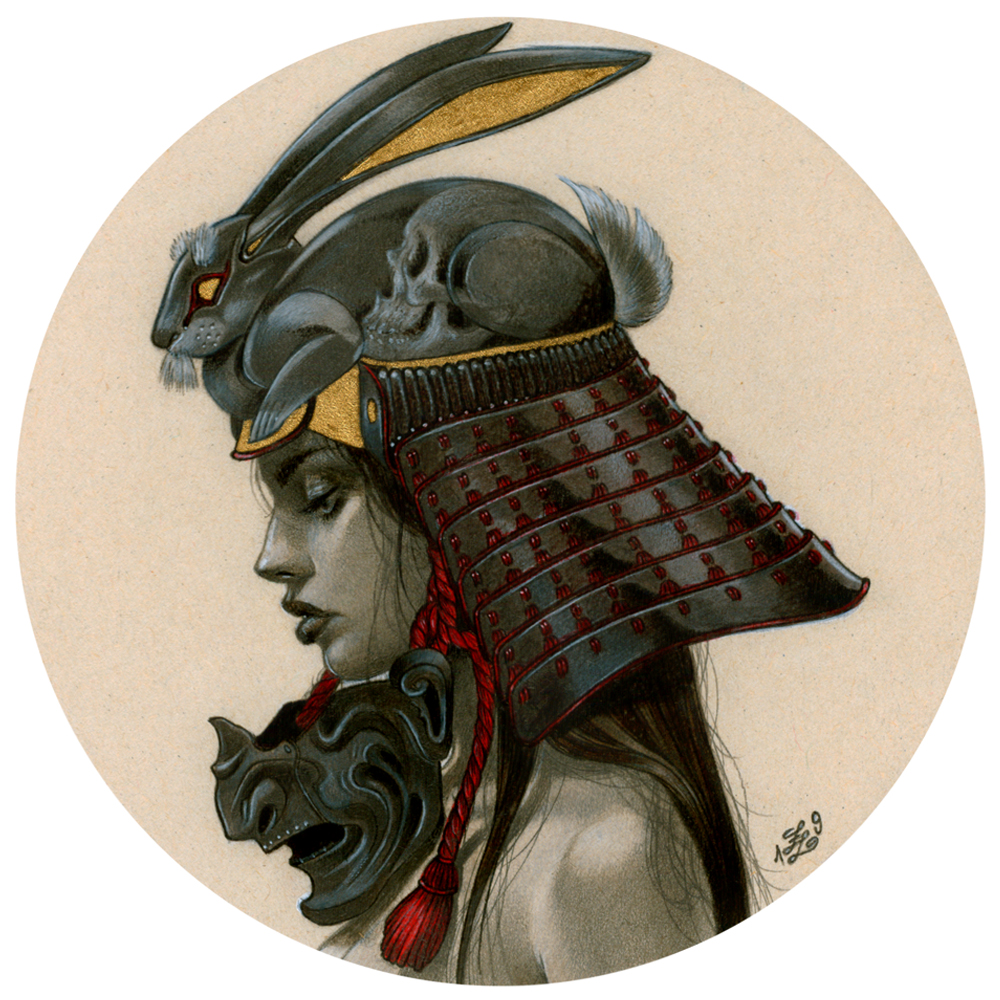 Lacchei considers Japan as her home away from home. From an early age she started drawing manga (Japanese cartoons) and was drawn to all the various aspects of Japanese culture. She sees Japan as the final destination of her artistic and personal journey. ‘A difficult road as it is the only place in the world where ‘excellence’ is judged at the highest level’ as she explained in an earlier interview with Beautiful Bizarre. For her “Geisha” project in 2007 she was inspired by the half-length portraits of Japanese beauties (Bijin-ga) of ukiyo-e artists like Utamaro and Kunisada. 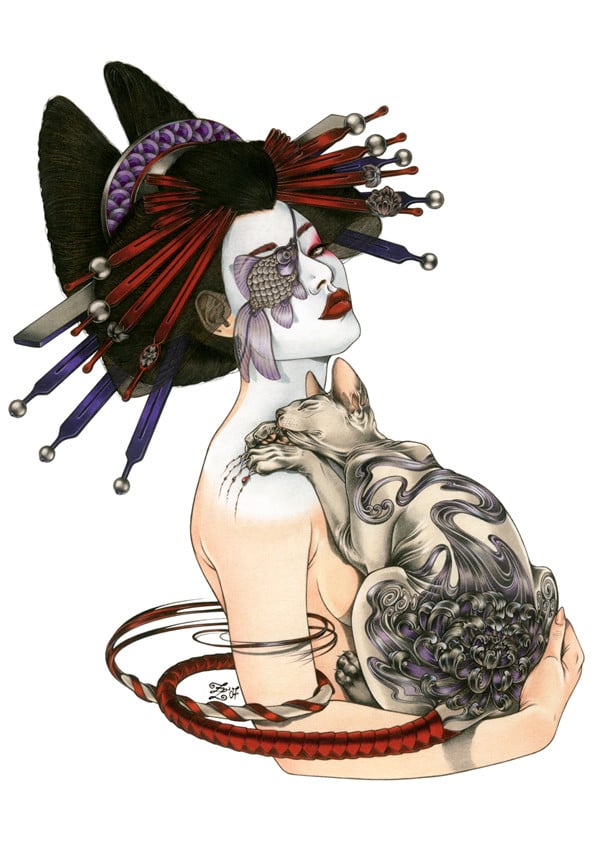 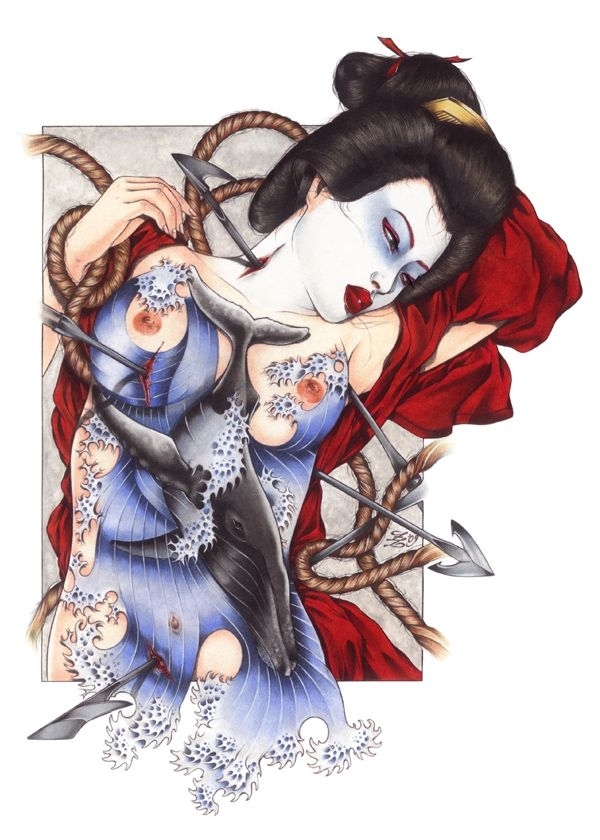 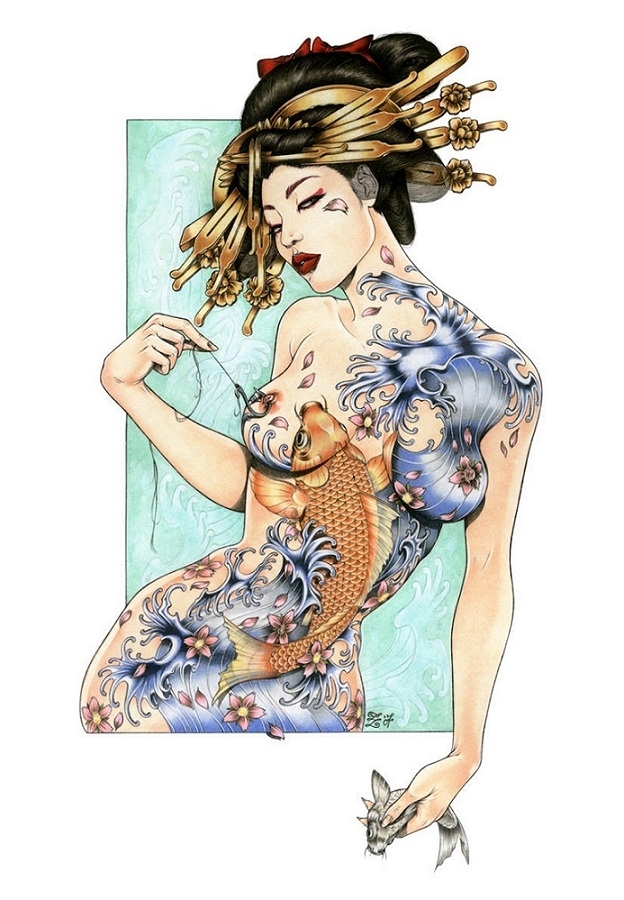 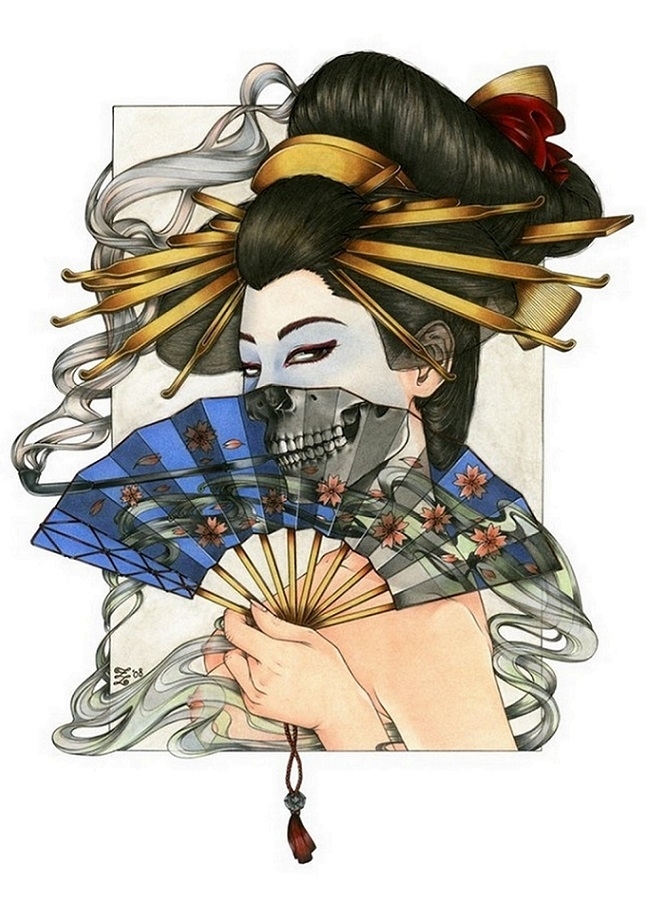 ‘Geisha with the Fan‘ 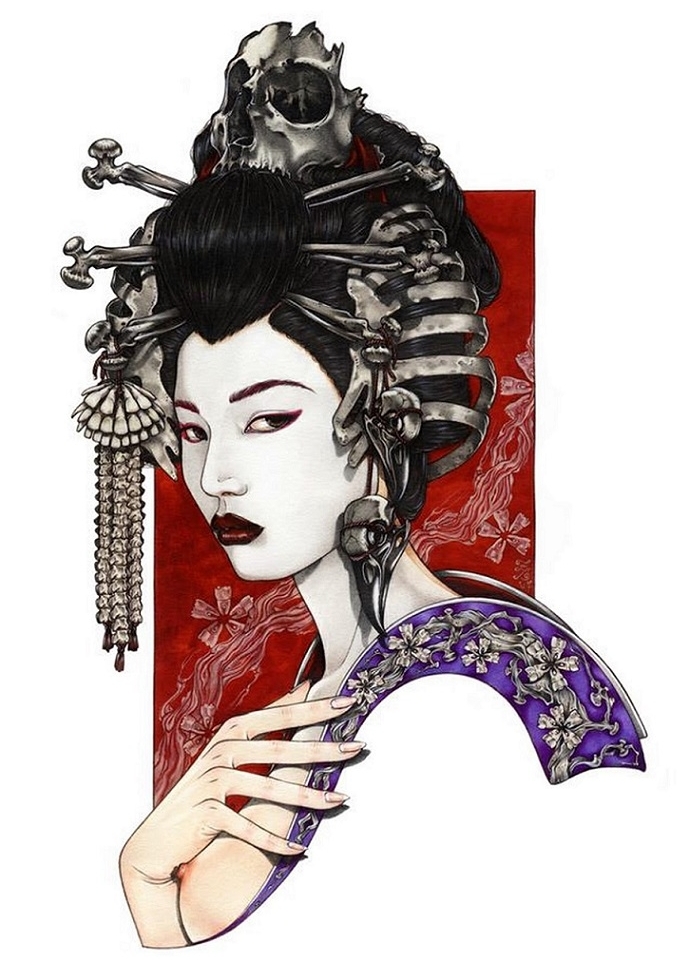 ‘Geisha of the Bones‘ 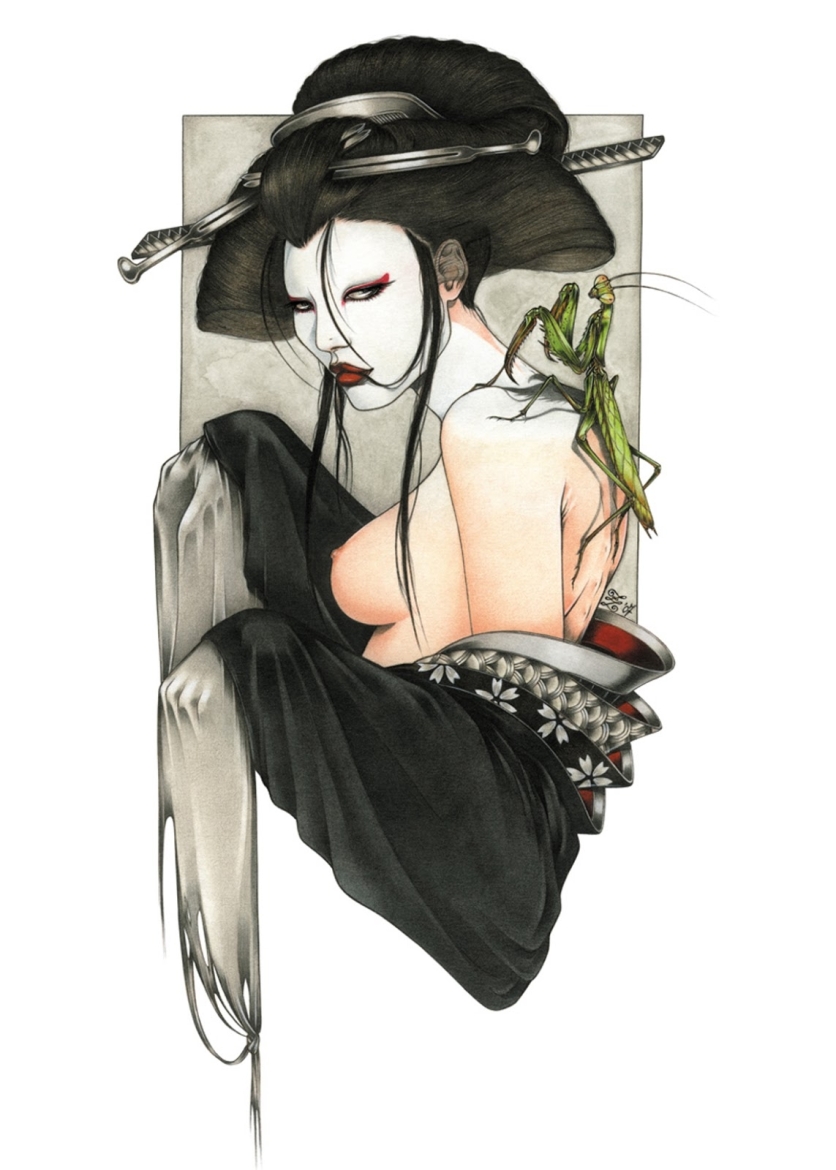 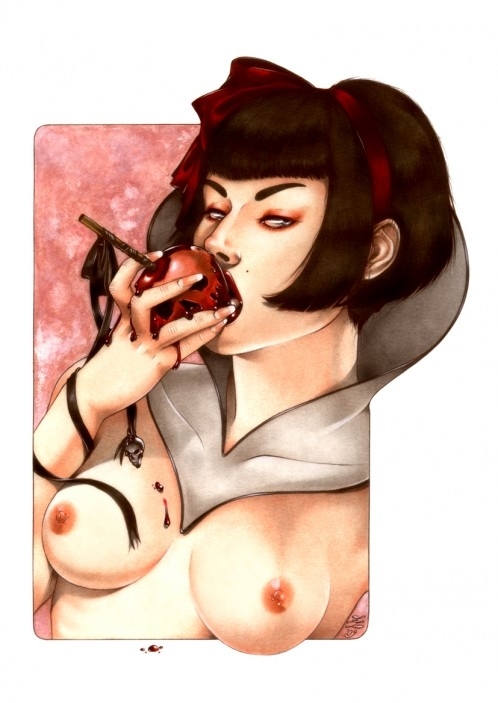 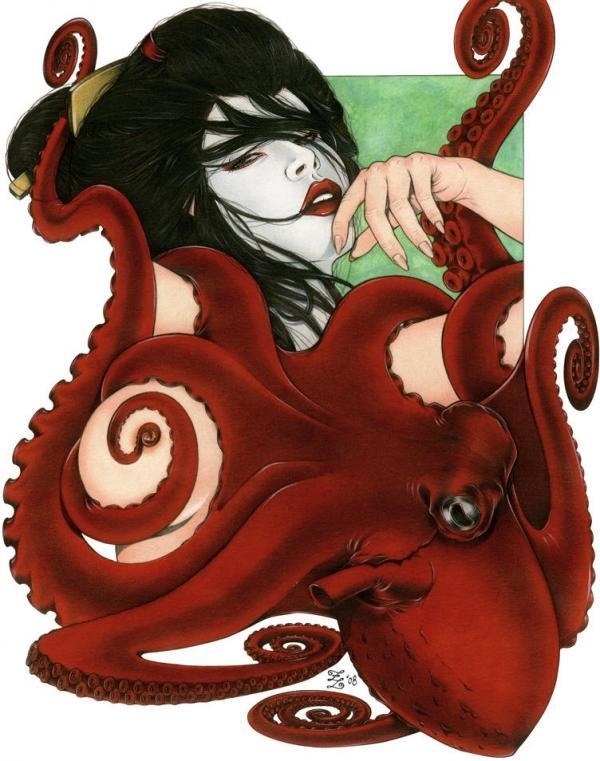 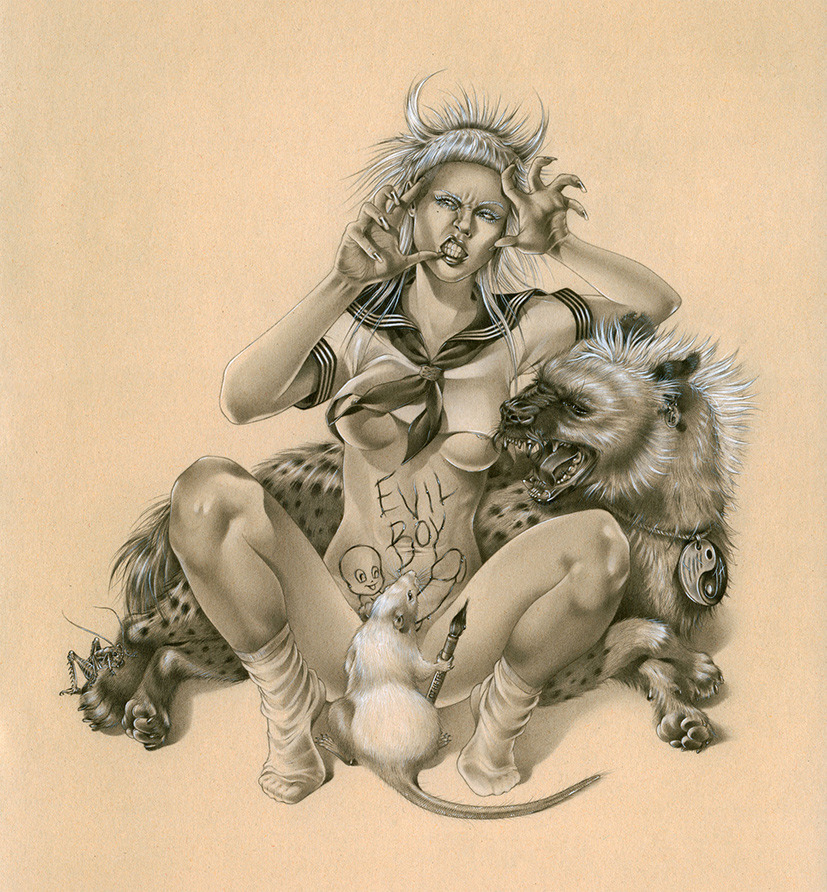 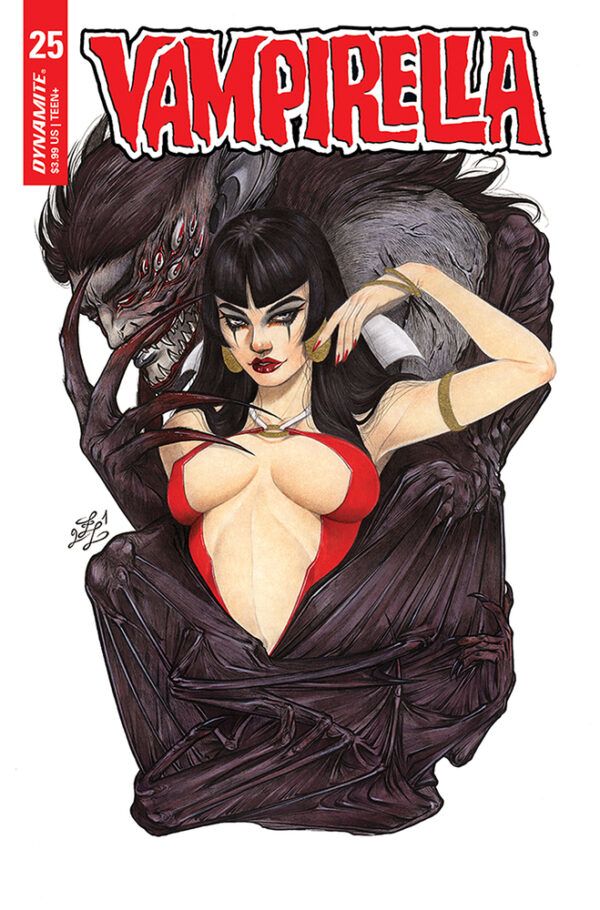 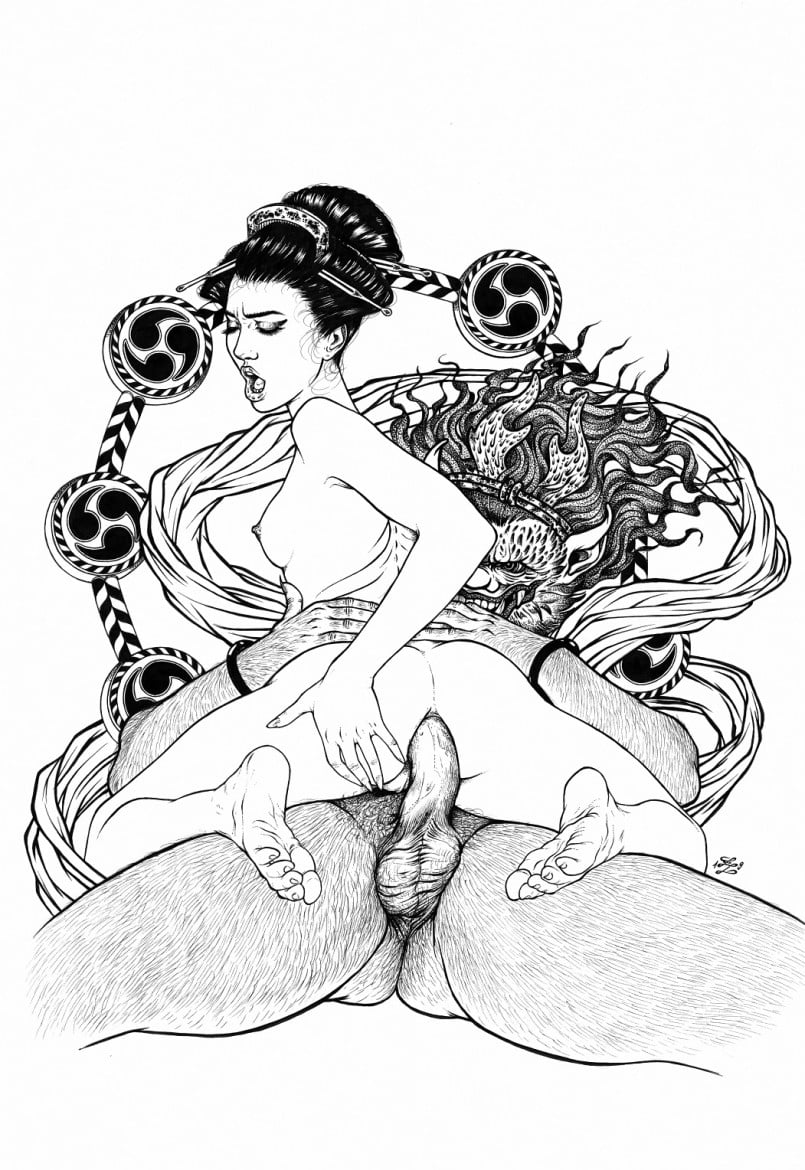 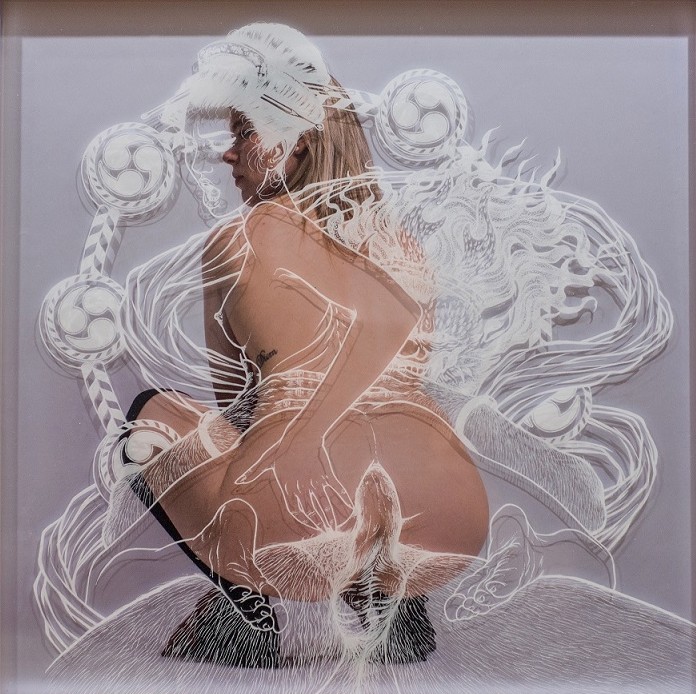 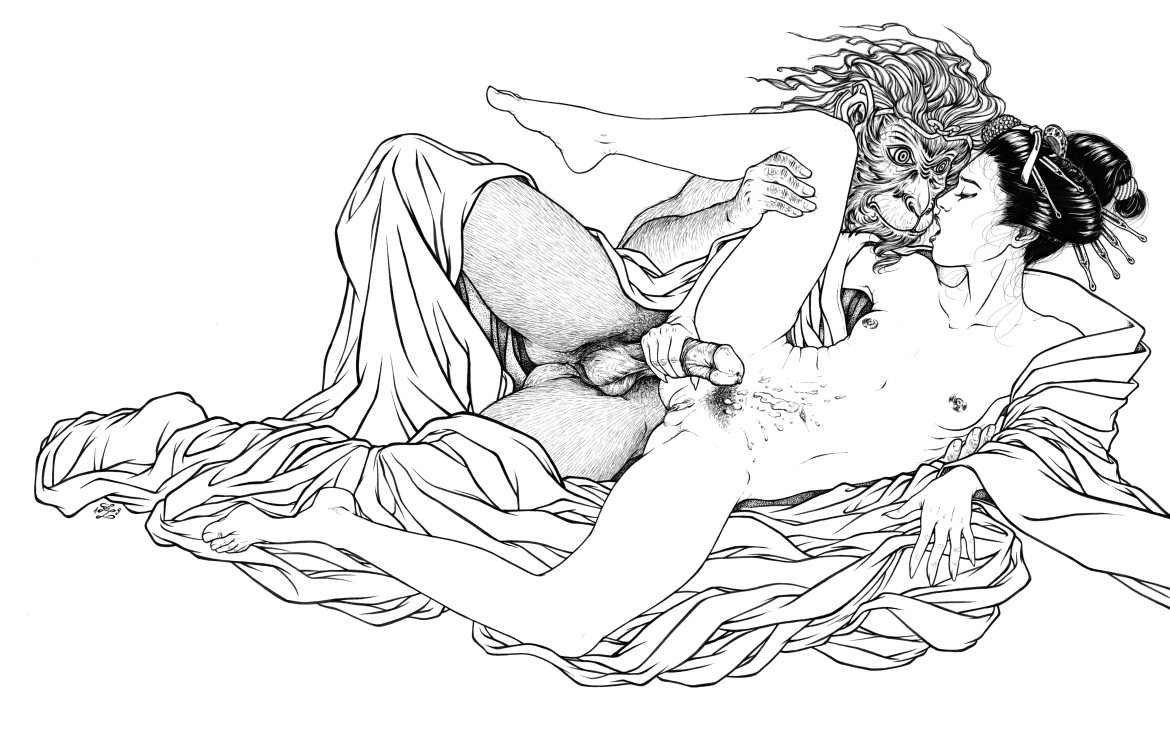 This “Goku” work is inspired by one of my personal favorite shunga tableaux featuring a satyr-like Dutch couple from Yanagawa Shigenobu’s “Willow Storm” series issued in the late 1820s. 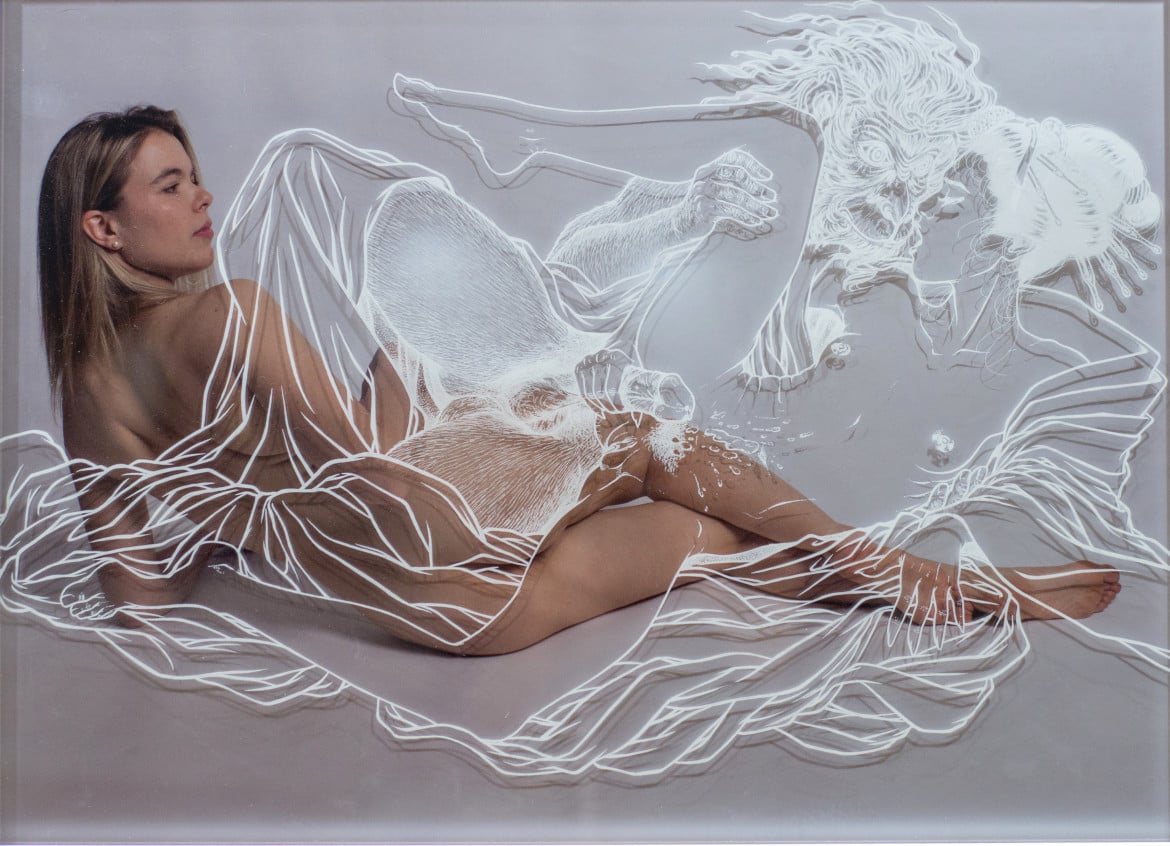 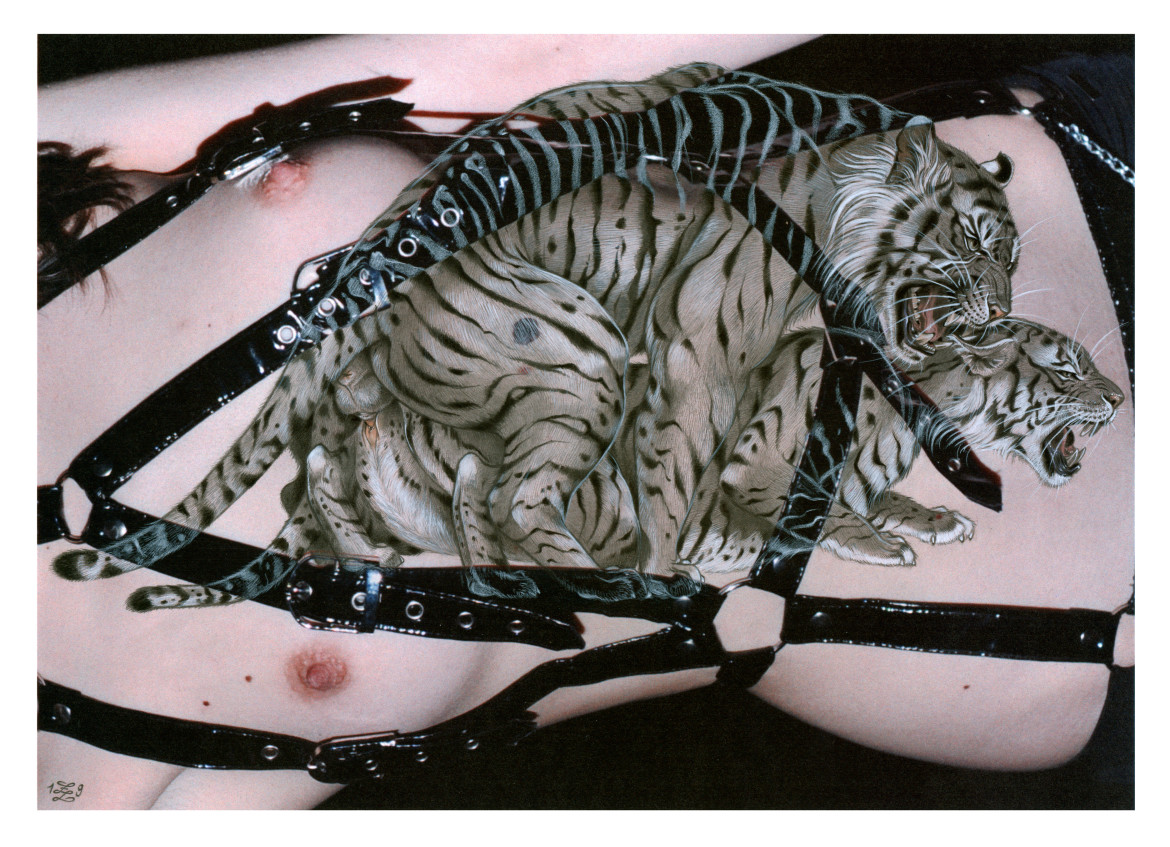 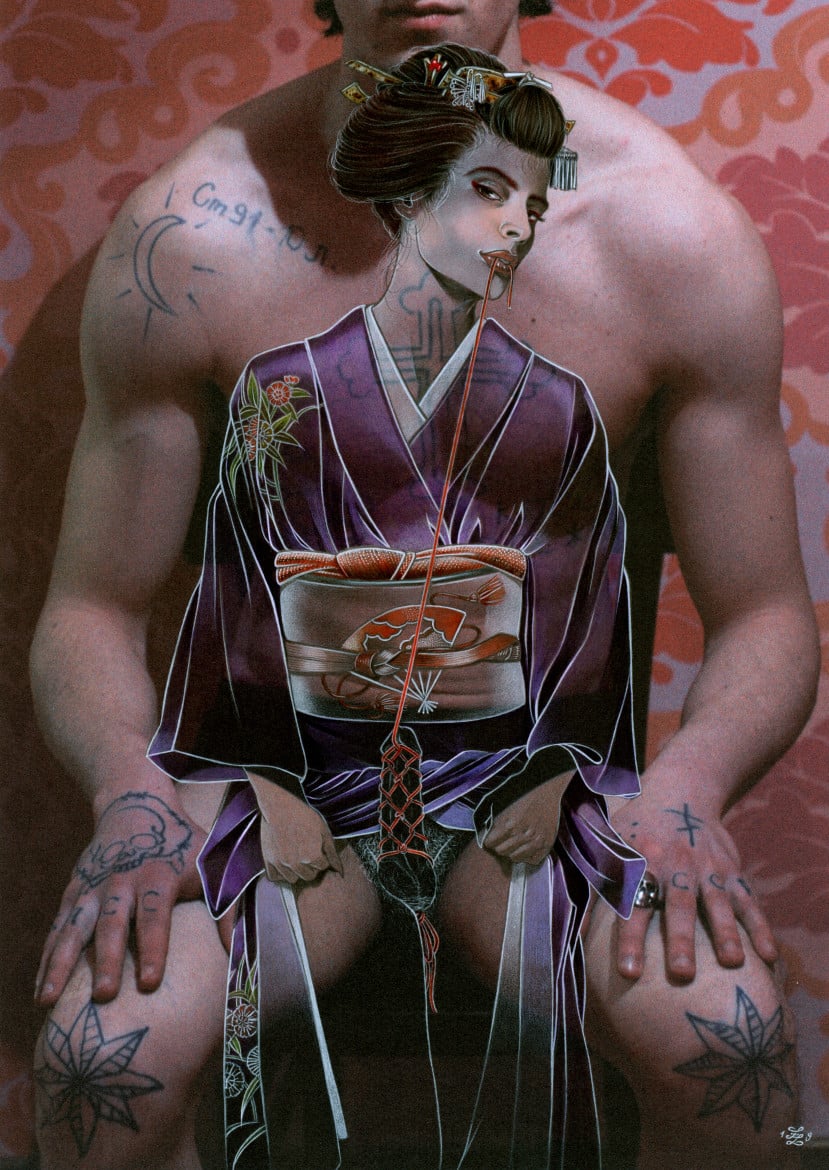 The tattooed knees of the Russian man in the picture are ‘thieves’ stars’ that carry the symbolic meaning “I will never get on my knees for anyone.”

Click HERE for another neo shunga artist with a strong passion for Japanese culture…!!

The above pieces are available in her shop (We are fans, not an affiliate!)…..!!

*All the above images were kindly (and exclusively) provided by the artist!

Let us know your thoughts on the sensual art of Zoe Lacchei in the comment box below….!!

A Conversation with the Illustrious Founder of Whores of Yore, Dr. Kate Lister
27 juni 2022

Thank you for the article! Very stylish art, so to say. Fits the atmosphere of grotesque and eat me drink me eras. Btw, Manson himself is a perfect painter.

Thanks for the introduction. Great artist. Hope she will continue to make this explicit stuff!

Thanks Tony. Me too! We'll keep you updated if she does!

Fine way of explaining, and good piece of writing to get data concerning my presentation subject matter, which i am going to convey in university.