The title Tōsei henge-zukushi (Collection of Spooks of Today) is just visible in silver-like pigment and blind-printing on this wrapper (Fig.1), now almost entirely rubbed off.  The image on the wrapper shows Minamoto no Yorimitsu (Raiko, d. 1021) on his sickbed guarded by his loyal retainers, the so-called 'Four Heavenly Kings' (Shittenō). 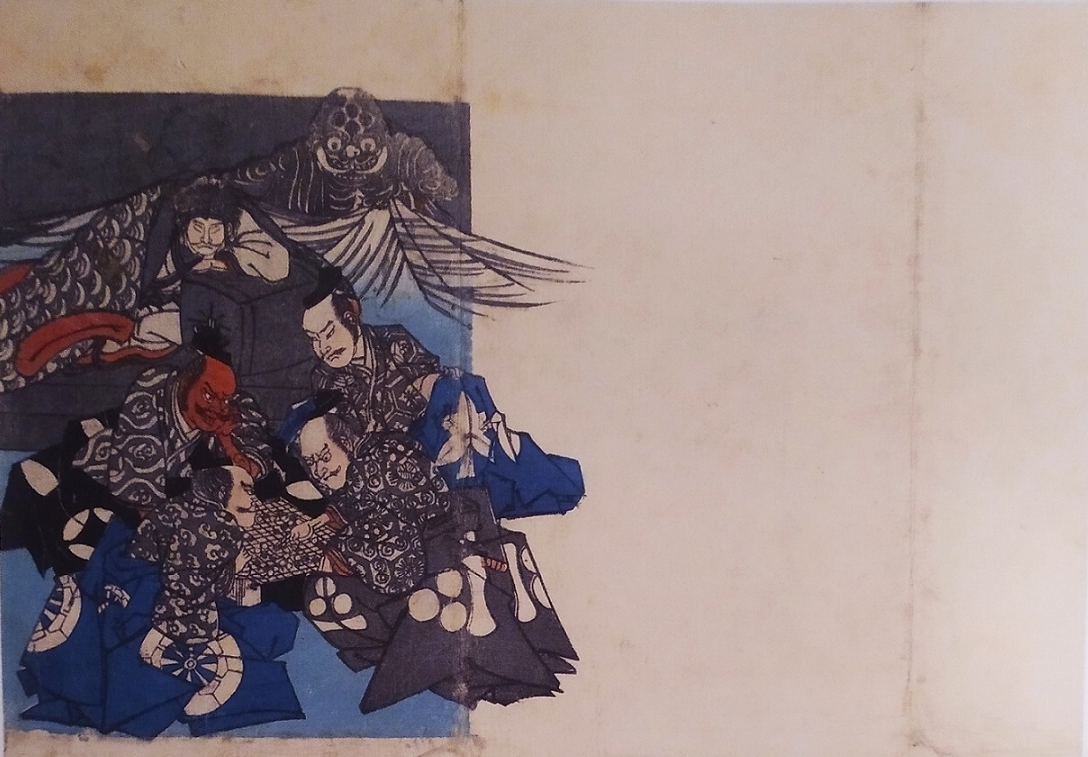 Spinning a malevolent web behind Yorimitsu is the evil 'Earth Spider', the Tsuchigumo. The related single-sheet print shows the content of Yorimitsu's fevered dream, in this case a battle between opposing armies of mixed penises and vulvas on both sides, who carry battle standards for competing brands of sex medicine: 'Chōmeigan' (Long-life Pills) and 'Nyo'etsugan' (Female Pleasure Pills). 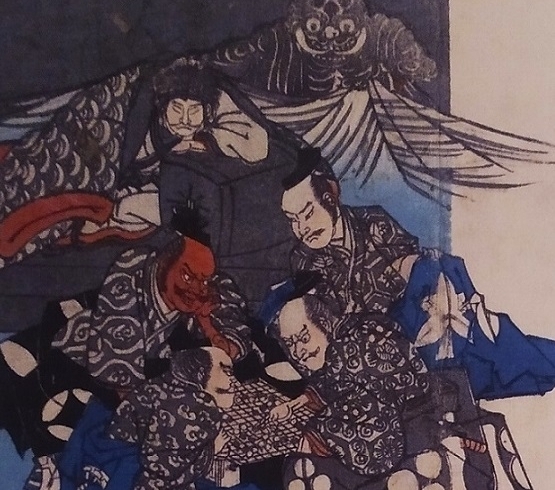 Both these designs are parodies of parts of Kuniyoshi's famous comic triptych print (Fig.3) Minamoto no Yorimitsu-kō no yakata ni tsuchigumo yōkai o nasu zu (The Earth Spider Conjures Up Demons in the Mansion of Minamoto no Yorimitsu) of 1843, which satirized the hated Tenpō reforms that were being imposed by the shogunate in 1841-43 and generated several pirated editions.

The wrapper and sheet print, originally folded into four to fit inside, seem to have been created to accompany a set of twelve small, unattributed shunga prints that have the title Ukiyo eiraku (Eternal Pleasure in the Floating World). The twelve prints show couples of various named social types making love against a spiderweb pattern that picks up on the Earth Spider theme of the wrapper. 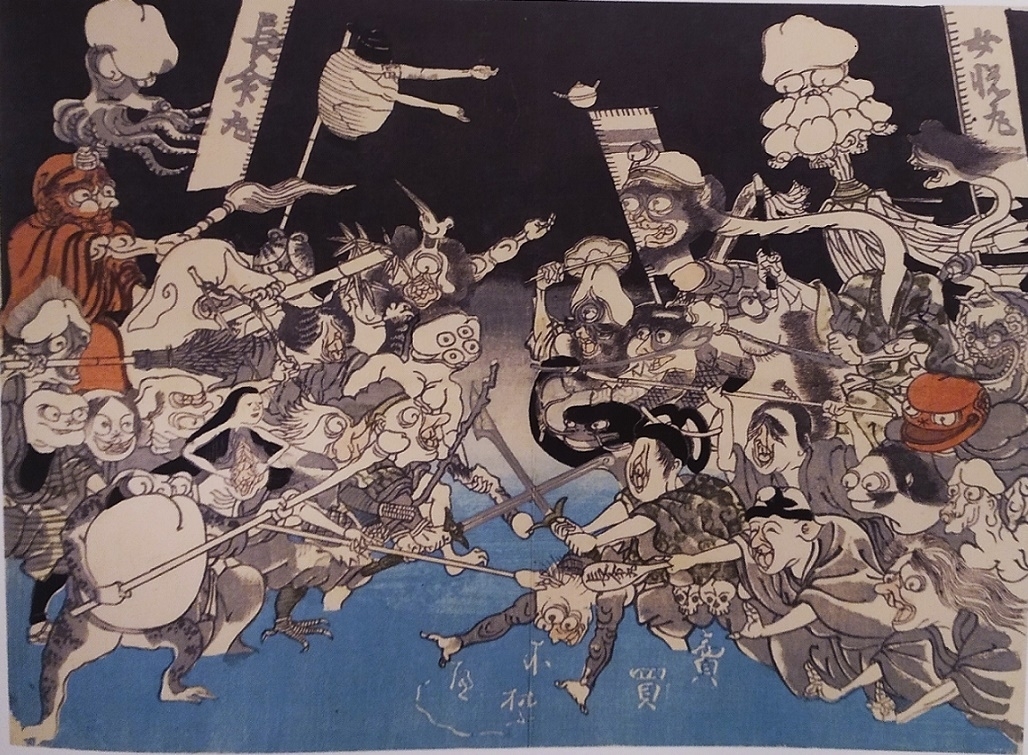 The single-sheet print carries an extravagant protest inscription printed in white reserve which reads, 'Not to be banned from sale!' ('babai kinzezaru beshi'). This might refer to shunga prints and books themselves, which were certainly among the many targets of the Tenpō reforms. However, the sex shop Yotsumeya at Ryōgoku which sold 'Chōmeigan' was apparently another target; so perhaps he plea is also to keep the sex medicines on sale, the comic print acting as advertising for - and perhaps sponsored by - the manufacturers. 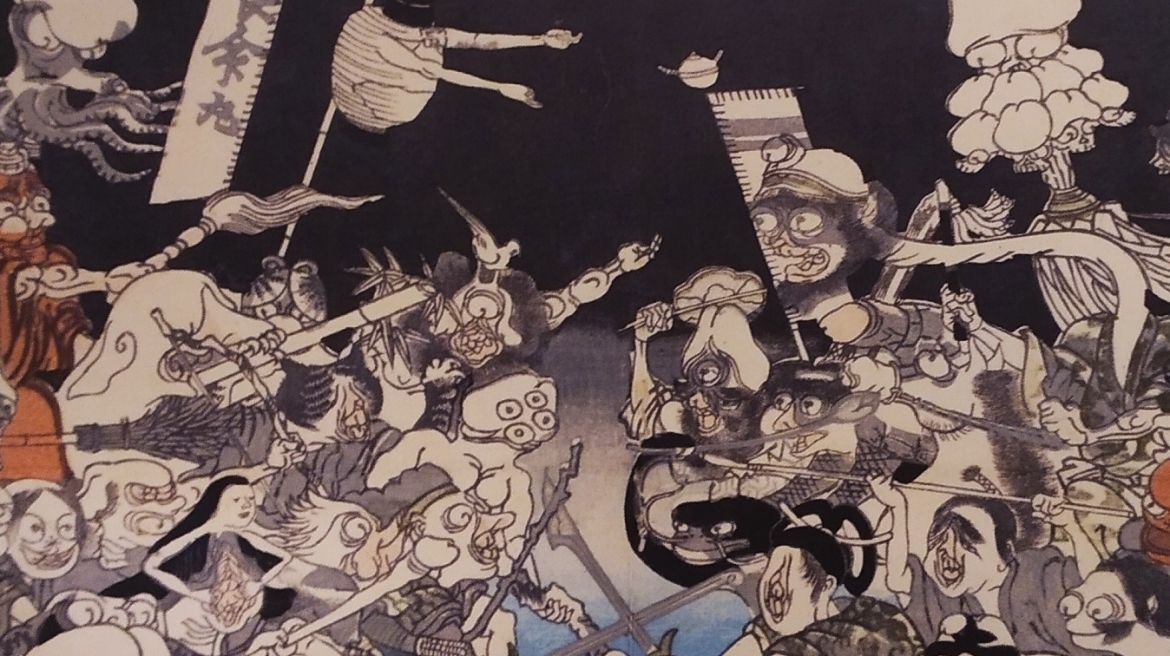 The unsigned designs have been attributed to Kuniyoshi himself, alternatively  to Utagawa Sadahide, who is known to have made a reduced-format pirate edition of the (non-erotic) Earth Spider triptych by Kuniyoshi. Given the complex sequence of piracies and censorship involved, however, it is perhaps wiser for the time being to classify them simply as 'after Kuniyoshi.' The Tsuchigumo, or earth spider was one of the Japanese malicious spirits known as Yōkai. Here, the earth spider torments the Fijiwara clan warrior Minamoto no Yorimitsu — filling his dreams with wicked beasts and monsters, while his retainers, unaware, play the Chinese strategy game of Go. In its day this was a controversial print — seen as a caricature of Shogun Ieyoshi. The original wood blocks for the print were burned, but Kuniyoshi replicated the blocks and continued to publish the prints. Fight the power Kuniyoshi. 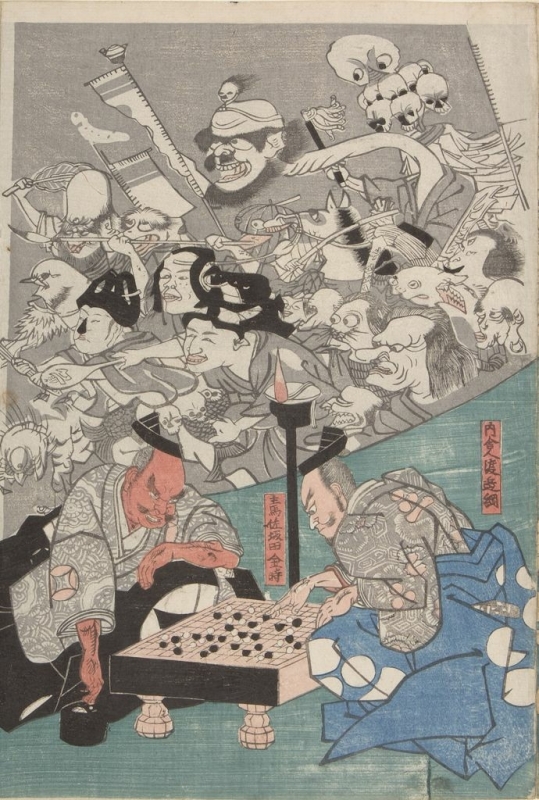 Source: Shunga, Sex and Pleasure in Japanese Art by the British Museum

Let us know your thoughts on Kuniyoshi's Earth Spider universe in the comment box below...!!

Very interesting piece! Wonder if someone will decide to recut and reprint it. Would be worth it. (The uncensored version if course.)

Thanks JB. Yes, would certainly be worth it. I know there is already a re-strike of Kuniyoshi's Earth Spider triptych.